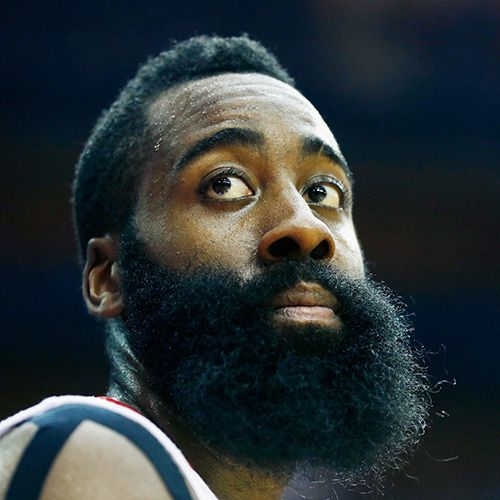 Who Is James Harden?

Basketball star James Harden is known as much for his prominent beard as he is for his stellar play. The No. 3 pick in the 2009 NBA draft, he began his career with the Oklahoma City Thunder, before a stunning trade to the Houston Rockets in 2012. Harden has since emerged as a perennial MVP candidate, thanks in part to the sort of play that produced a record-setting 60-point triple-double in January 2018.

James Edward Harden Jr. was born on August 26, 1989, in Los Angeles, California. James Sr., a former Navy seaman, was mostly absent from his life, leading to Harden and his two siblings being raised by their mom, Monja Willis, in the notorious neighborhood of Compton.

By the time he first tried out for the boys' basketball team at Artesia High School in nearby Lakewood, Harden stood a relatively modest 6'1" and was hampered by bouts of asthma. However, he immediately impressed his coaches with his game instincts, and after sprouting a few inches, he became one of the top players in the nation. Harden led Artesia to back-to-back state championships, and was named a McDonald's All-American in 2007.

One of the most decorated recruits in Arizona State basketball history, Harden immediately helped turn around a program that sunk to an 8-22 record in 2006-07. The Sun Devils improved to 21 wins during Harden's freshman season, and surged to 25 wins and a berth in the NCAA Tournament by his third and final year. Named the Pac-10 Conference Player of the Year and an All-American, he wrapped up his collegiate career ranked third all-time in ASU's record book with an average of 19.0 points per game, and later had his No. 13 retired by the school.

Selected by the Oklahoma City Thunder with the No. 3 overall pick in the 2009 NBA draft, Harden got his pro career off to a strong start by earning All-Rookie Second Team honors.

By 2011-12, he was an integral part of a team that also featured superstar scorers Kevin Durant and Westbrook. He was named the winner of the NBA's Sixth Man of the Year Award, and the Thunder rolled through the playoffs before suffering a tough five-game loss to LeBron James and the Miami Heat in the NBA Finals.

Capping his breakout season, Harden was a member of the gold-medal-winning U.S. Olympic team at the 2012 London Olympics.

Trade to the Rockets

In late October 2012, shortly before the start of the NBA season, the Thunder sent ripples through the league with the announcement that they were trading Harden to the Rockets, reportedly over the inability of the two sides to come to terms on a contract.

In return, the Thunder received guard Kevin Martin, recent draft pick Jeremy Lamb and multiple future draft picks, but the lack of an impact player to match the production of Harden resulted in the trade being viewed as heavily lopsided in favor of Houston.

Career with the Houston Rockets

Since joining the Rockets prior to the 2012-13 season, Harden has emerged as one of the top players in the NBA. He earned the first of six straight All-Star berths that year, and finished second in the voting for Most Valuable Player in 2015 and 2017 before finally claiming the trophy in 2018.

For all his individual brilliance, Harden was unable to push the Rockets past the pack of contenders in his first few years with the team. Houston did reach the Western Conference Finals in 2015, but was bounced in the first round of the playoffs in 2016, and saw another promising season halted in the second round the following year.

With Paul bringing his veteran leadership to the team, and key role players like Eric Gordon fitting nicely alongside Harden in his prime, the Rockets won an NBA-best 65 games in 2017-18, before suffering a heartbreaking loss to the Golden State Warriors in the Western Conference Finals. The following year, Harden lifted Houston out of an early hole with his unstoppable scoring ability, but the season again ended at the hands of the Warriors in the playoffs.

Thanks to his superb all-around skills, Harden has stuffed the stat sheet with some record-breaking performances:

• On January 30, 2018, he became the first player in NBA history to score 60 points while recording a triple-double (at least 10 points, rebounds and assists). Additionally, that point total broke the previous Houston Rockets franchise record of 57 points, set by Calvin Murphy in 1978.

• During the 2016-17 season, he became the first NBA player to record two 50-point triple-double games (later surpassed by Russell Westbrook).

After his contract with Nike ran out, Harden signed a 13-year endorsement deal with Adidas in 2015. The arrangement led to the debut of the athlete's signature shoe, the Harden Vol. 1, in November 2016.

Adidas debuted the Harden Vol. 2 during NBA All-Star Weekend in February 2018. The latest creation was designed with a wider base and durable traction pattern on the outsole, giving the player the ability to better change direction and pull off his patented "Eurostep" move.

Standing 6'5", Harden is the ideal size for a shooting guard, his normal position. However, he is also known for his dribbling and passing abilities, attributes best suited for the point guard position. Harden actually was moved to point guard during the 2016-17 season, though he shifted back to his usual position when point guard Chris Paul joined the Rockets before the 2017-18 season.

In 2015, Harden began making his trademark "stirring the pot" gesture — one hand cupped like a bowl, the other twirling inside it — after making a big shot. Attentive viewers traced the move to a video for "Flicka Da Wrist," by Houston rapper Chedda Da Connect, though Harden claimed he just started doing it while playing around with friends.

After beginning a relationship with Khloé Kardashian in the summer of 2015, Harden found himself at the center of the ever-swirling media circus surrounding the reality-TV clan. The situation didn't sit well with the soft-spoken basketball star, who was said to be relieved after their romance fizzled early the following year.

Harden was previously linked to rapper Trina, and has also reportedly been involved with Instagram models Jessyka Janshel and Arab Money.

Among his philanthropic efforts, Harden has formed the 3 The Harden Way Inc., to provide higher learning opportunities for youth. In 2017, he pledged $1 million to support victims of Hurricane Harvey.