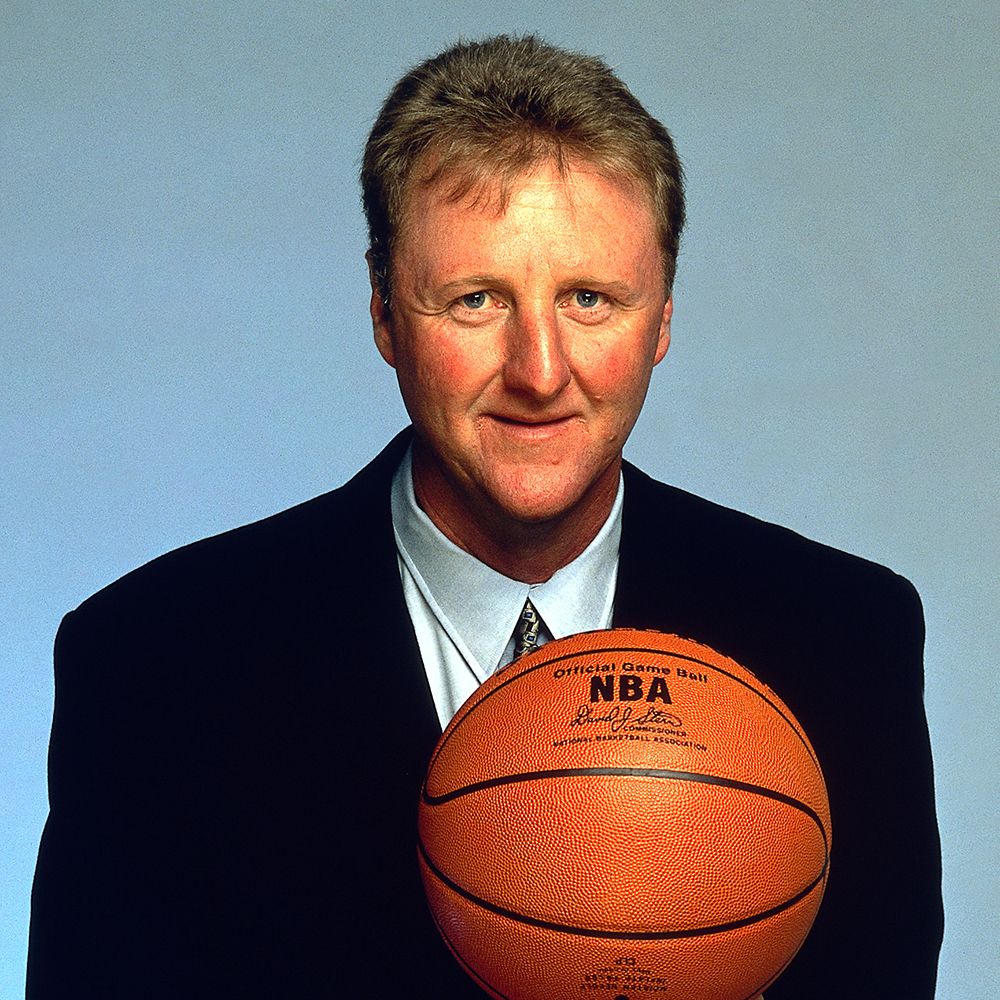 Photo: Will Hart/NBAE via Getty Images

Who Is Larry Bird?

Larry Bird starred at Indiana State University before joining the NBA's Boston Celtics in 1979. Over the course of his 13-year Hall of Fame career, the sharpshooting forward led the Celtics to three NBA titles and claimed three MVP awards. Following his retirement in 1992, Bird became a successful head coach and front-office executive with the Indiana Pacers.

Bird was born on December 7, 1956, in West Baden Springs, Indiana, and raised in the nearby town of French Lick, where he excelled at basketball at an early age. Bird attended Springs Valley High School in French Lick and was a key component of the school's basketball team, becoming its all-time leading scorer by the time he graduated in 1974.

Bird's basketball prowess earned him an athletic scholarship to Indiana University, where he was to play for legendary coach Bob Knight. However, the sharpshooting forward felt some trepidation about the size of the Hoosier campus and withdrew from school, enrolling at Indiana State the next year.

Following his junior year, Bird was selected with the sixth overall pick in the NBA draft by the Boston Celtics. He chose to return to Indiana State for one more year and led the Sycamores to the NCAA championship game against the Michigan State Spartans, a team led by another future NBA superstar, Ervin "Magic" Johnson. It was the first time the two star players would face each other in a head-to-head battle, and it began a friendship and rivalry that would span both players' careers. Johnson and the Spartans triumphed, but Larry Bird left Indiana State that year with the USBWA College Player of the Year Award, the Naismith Award and the Wooden Award. At the time, he was also the fifth-highest scorer in NCAA history.

Signing with the Celtics for a then-record $650,000 a year, Bird justified his salary right out of the gate, averaging 21.3 points per game and claiming Rookie of the Year honors for the 1979-80 NBA season. Bird also led the Celtics in rebounding, with an average of 10.4 per game, as well as in steals and minutes played.

Prior to Bird's second year, the Celtics acquired center Robert Parrish from the Golden State Warriors and drafted Kevin McHale. Those three players would form a legendary frontline, perhaps the greatest in NBA history. That season, the Celtics posted a 61-21 record and defeated the Houston Rockets to take the first NBA championship of Bird's career.

Along with Johnson, who also entered the NBA in 1979 with the Los Angeles Lakers, Bird was a key figure in revitalizing the league in the 1980s. The Celtics and Lakers dominated, with one team or the other, or both, appearing in every NBA championship throughout the decade. Bird was already known after two years in the league for consistent, clutch scoring and tenacious defense, which seemed especially uncanny as he was not particularly fast on his feet; instead, Bird developed a reputation for not merely responding to his opponents' moves but anticipating how they would unfold ahead of time. His concentration and composure were unrivaled as well, and he established himself as one of the most unshakable and driven players in the NBA.

The Celtics reached the playoffs in every one of Bird's 13 seasons, although he missed most of the 1988-89 season due to injury, and added titles in 1984 and 1986. He made the All-Star team 12 times and was named the All-Star Game Most Valuable Player in 1982. For three consecutive years, from 1984 to 1986, Bird was named the NBA's MVP, and in 1990, he hit a milestone by reaching 20,000 career points. However, by then his formerly relentless attack on the court had been slowed by a bad back.

The summer of 1992 marked the first time the United States sent professional athletes to the Olympic Games. Bird, Johnson, Michael Jordan and other NBA stars formed the American men's basketball team, which would become known as the "Dream Team." Bird and his teammates easily won the Olympic gold medal for the United States, and just a few weeks later, Bird announced his retirement as a player. He finished his career with sterling averages of 24.6 points and 10 rebounds per game.

Head Coach of the Indiana Pacers

Bird began the next chapter of his life as a front-office special assistant for the Celtics, a post he held for five years. In 1997 Bird accepted the head coach position with the Indiana Pacers, a move that returned him to his home state. Despite no previous coaching experience, he led the Pacers to a 58-24 record — the franchise's best at the time — in the 1997-98 season and was named the NBA Coach of the Year. After leading the Pacers to the NBA Finals in 2000, he stepped down as head coach. Bird returned to the Pacers in 2003 as president of basketball operations. At the end of the 2011-12 season, he was named NBA Executive of the Year, making him the only person to be named the NBA's MVP, Coach of the Year and Executive of the Year. Although he announced his departure around that time, he reclaimed his post as team president in the summer of 2013.

Bird is universally regarded as one of the greatest basketball players of all time. Underscoring his place in the game's history, he was named one of the NBA's Top 50 players in 1996, and inducted into the Naismith Memorial Basketball Hall of Fame in 1998. In 1999, he was listed at No. 30 on ESPN SportsCentury's Top 50 athletes of the 20th century, with only five other basketball players ranked higher.

Bird has been married to Dinah Mattingly since 1989. The two adopted a son and daughter, Conner and Mariah. He was briefly married to first wife Janet Condra from 1975-76 and has a daughter with her named Corrie.