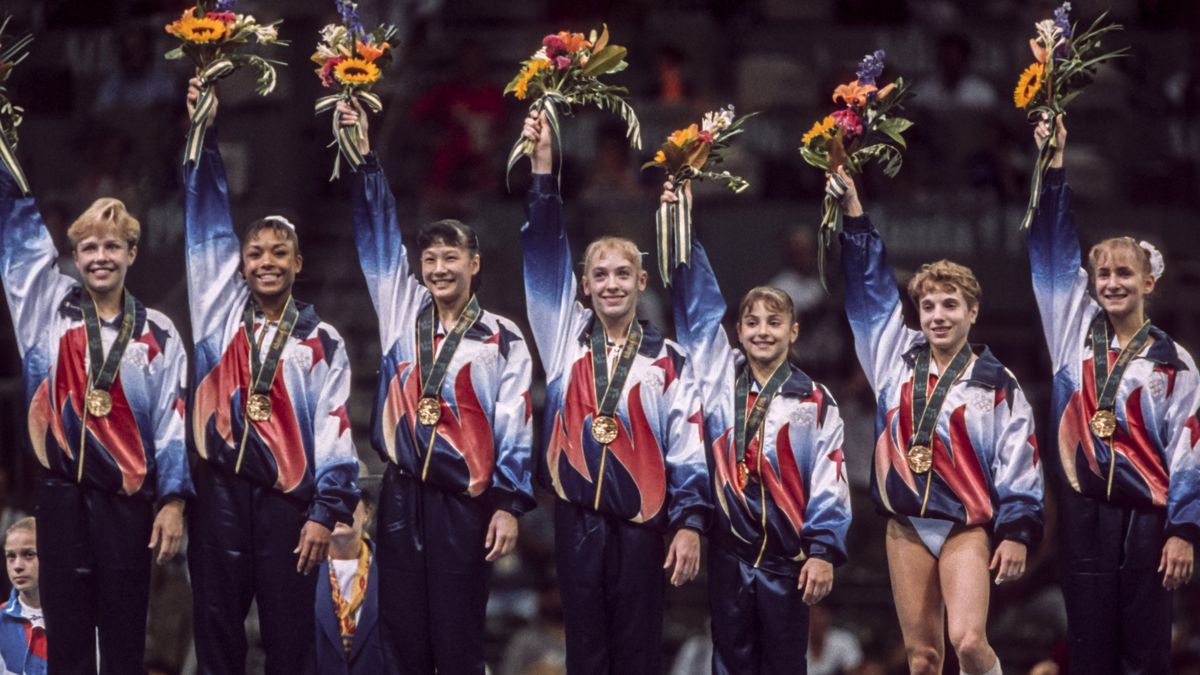 When it comes to pure sports drama, few performances can surpass the one delivered by the U.S. women's gymnastics team at the 1996 Summer Olympics in Atlanta, Georgia. After coming out swinging against their powerhouse Russian and Romanian rivals, the hometown darlings saw their once insurmountable lead almost slip away, before Kerri Strug famously stuck her vault landing on an injured ankle to give the Americans their first team gold in Olympic history.

While athletic heroes come and go in the ever-rotating competitive sports landscape, this spirited group clearly left a lasting mark on the fans who eagerly followed their media appearances and group tour in the months that followed. Most still recall the lasting image of a hobbled Strug carried to the medal stand. Here's a look at what each one of the aptly named "Magnificent Seven" is up to now. 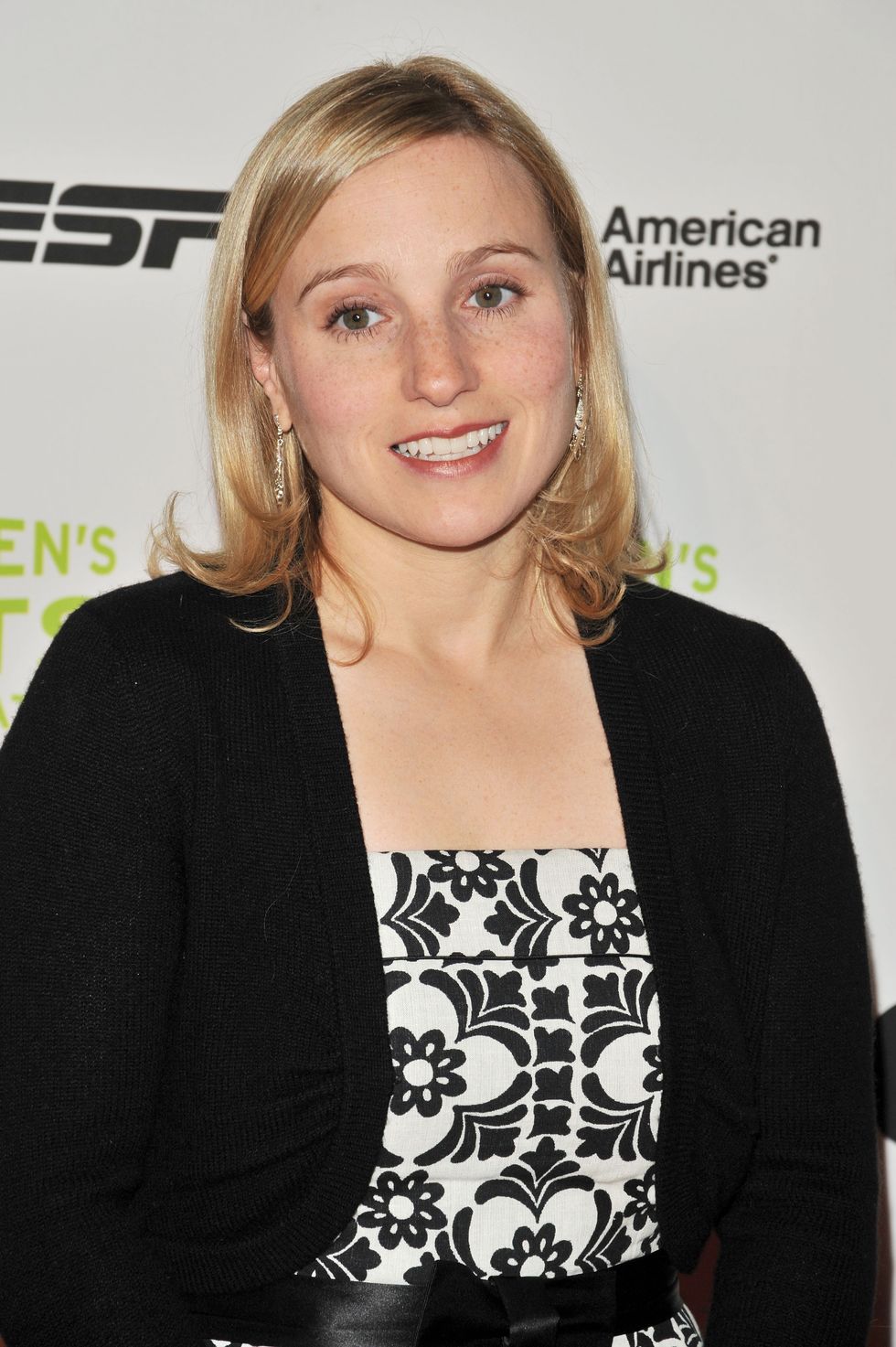 As the poster child of the 1996 American Olympic triumph, Strug achieved a level of celebrity that surpassed that of her teammates. She appeared on Saturday Night Live and The Tonight Show With Jay Leno; rang the opening bell at the New York Stock Exchange and earned a solo spot in a touring MGM/Ice Capades production. But she quickly moved on from public life, traveling the world in a semester abroad before earning a Master's in social psychology from Stanford University in 2002. Following a brief teaching stint, Strug settled into a longtime government position in the Office of Juvenile Justice and Delinquency, and had two children with her husband, Robert Fischer. Even though she'd abandoned her vaults and floor routines in favor of running marathons, she still found time to teach her old sport through clinics—her familiar diminutive frame and high-pitched voice bringing back memories to those who witnessed her memorable Atlanta performance.

Along with delivering an electrifying performance on the uneven bars, Dominique "Awesome Dawesome" Dawes made history in '96 as the first African American gymnast to win an individual Olympic medal, a bronze in the floor exercise. In the aftermath, she appeared in a Prince video and landed a role in a Broadway production of Grease!, before refocusing in time to claim Olympic bronze at the 2000 Sydney Games. Dawes subsequently served as president of the Women's Sports Federation, and in 2010 accepted an offer to co-chair the President's Council on Fitness, Sports and Nutrition. Married with four children, Dawes has followed her early stage and screen interests with various TV correspondence roles, and sought to groom new generations of talent by way of the Dominique Dawes Gymnastics & Ninja Academy in her home state of Maryland.

Crushed by her failure to make the 1992 U.S. Olympic team, Amanda Borden nearly walked away from the sport before returning to captain the world-famous squad four years later. Her legacy secure with a balance beam jump named in her honor, the Ohio native moved on to broadcasting, and graduated summa cum laude from Arizona State University with a degree in elementary education. After teaching for more than two years, Borden found her post-Olympic calling by opening Gold Medal Gymnastics in Tempe, Arizona, with husband Brad Cochran. She has since opened a second training center in Arizona, settled into regular gigs as a gymnastics and cheerleading commentator and learned to navigate life as a busy working mother of three.

Like her one-time training partner Borden, Jaycie Phelps also has a gymnastics maneuver named for her—albeit on the vault. And she, too, found fulfillment in the field of coaching after a series of knee injuries ended her competitive career. After joining her teammates for their induction into the U.S. Olympic Hall of Fame in 2008, the gymnast returned to her hometown of Greenfield, Indiana, to launch the 25,000-square-foot Jaycie Phelps Athletic Center. Her contributions to Greenfield have been honored with the naming of a road in her honor and the declaration of a Jaycie Phelps Day. She is married to fellow gymnastics coach Dave Marus, with whom she has two children.

Coming off an impressive haul of two silvers and three bronze medals at the 1992 Olympics, Shannon Miller added an individual gold on the balance beam to her team gold in Atlanta, and later became the first female athlete to be inducted into the U.S. Olympic Hall of Fame twice. The Oklahoma native went on to launch the Shannon Miller Foundation in 2007 to combat childhood obesity, and then the Shannon Miller Lifestyle brand in 2010, paving the way for a busy second career as a motivational speaker, health advocate, television analyst and author. But her greatest post-Olympic challenge – and success – came when she was diagnosed with ovarian cancer in early 2011. Miller not only beat back the illness through aggressive chemotherapy treatments, but she was also able to have a second child with husband John Falconetti in its aftermath.

The first Asian American Olympic gymnast, Amy Chow was renowned for her willingness to embrace risk on the uneven bars, a bold mindset that led to an individual silver at the Atlanta Games and a pair of moves named in her honor. The lifelong Californian went on to graduate from Stanford Medical School and pursue a career as a physician and surgeon, opening a practice in the Bay area with her husband, Jason. But she never quite shook her competitive instincts. Chow joined Dawes as one of only two '96 alumnae on the 2000 U.S. Olympic team, and when her gymnastics career ended, she turned to pole vaulting. Chow later took up diving, generating buzz about a possible 2012 Olympic berth, before determining she already had her hands full as a doctor and mother of two.

The youngest and tiniest of the Magnificent Seven, 14-year-old Dominique Moceanu fought through the lingering pain of a stress fracture to make her mark on the Atlanta Games. She followed with a gold medal in the all-around at the 1998 Goodwill Games, but her post-Olympic days brought one life-altering event after another. In 1998, Moceanu sought emancipation from her parents, and just before her father died, she learned that her younger sister had been given up for adoption. Moceanu spoke out about the psychological and physical abuses prevalent in high-level gymnastics in her 2012 memoir, Off Balance, and while she initially felt pushback for coming forward, her accounts took on new light when the crimes of team doctor Larry Nassar surfaced in 2015. By then a married mother of two, she opened Dominique Moceanu Gymnastics Center in 2017 with an intent to change the culture of the sport.