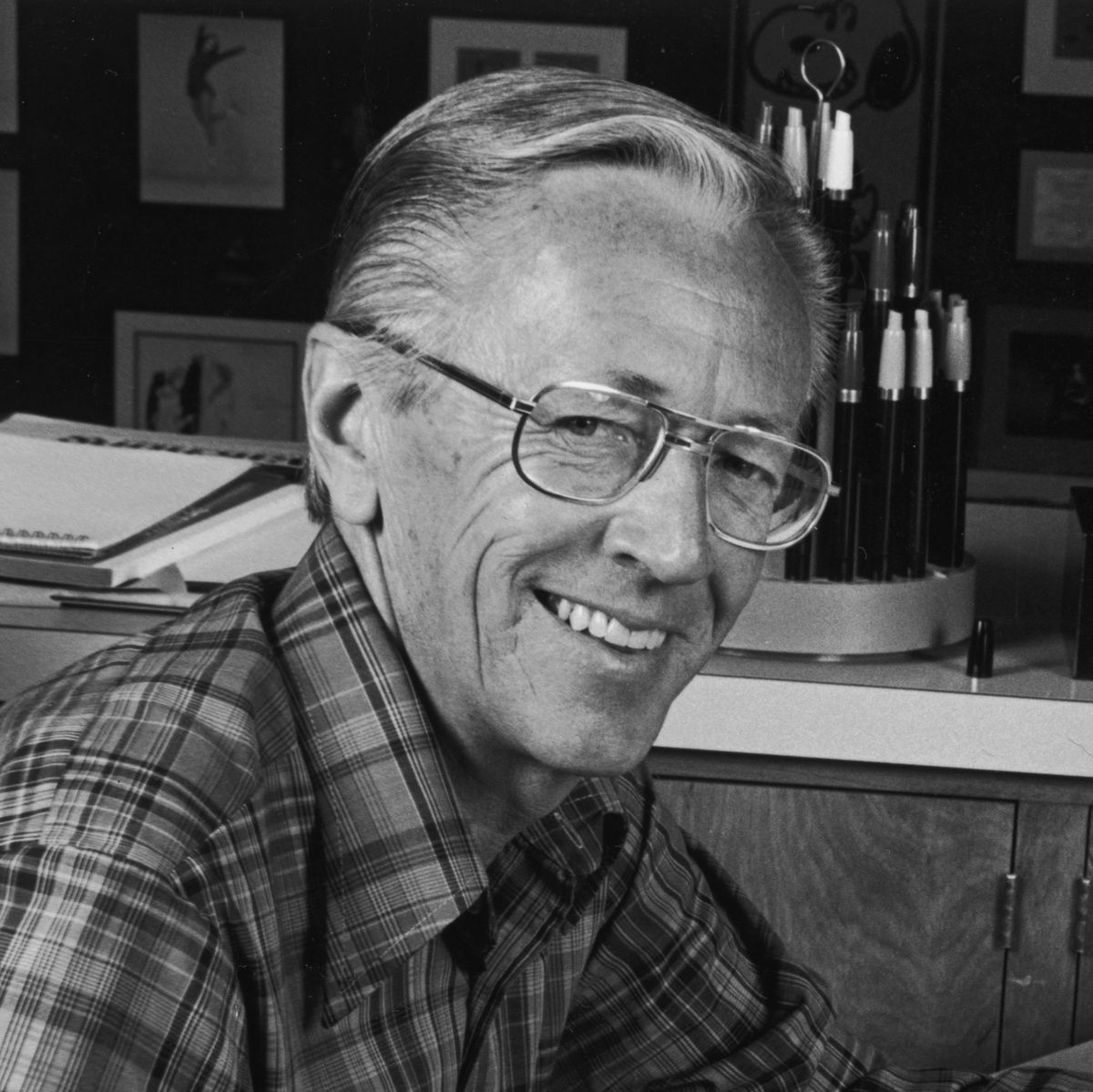 Who Was Charles Schulz?

Charles Schulz launched his comic strip Peanuts in 1950. Featuring hero Charlie Brown, over the years the strip would run in more than 2,000 newspapers and in many languages. Peanuts also expanded into TV specials like the Emmy-winning A Charlie Brown Christmas, as well as books and a huge merchandise collection. Schulz died on February 12, 2000.

Charles Monroe Schulz was born on November 26, 1922, in Minneapolis, Minnesota. The only child of dad Carl, a German immigrant and barber, and mom Dena, a waitress turned homemaker, Schulz spent most of his childhood in the Twin Cities, outside of a two-year stint in Needles, California, after the onset of the Great Depression.

Schulz realized at an early age that he wanted to become a cartoonist. He sat down with his dad to read the Sunday funny papers every week, becoming a fan of E.C. Segar’s Thimble Theatre (which featured Popeye), Percy Crosby’s Skippy and Al Capp’s L’il Abner. The burgeoning cartoonist received a thrill in 1937, when his drawing of the family dog, Spike, was published in Robert Ripley’s popular Believe It or Not! feature. Late in his senior year at St. Paul’s Central High School, Schulz enrolled in a correspondence course at the Federal School of Applied Cartooning in Minneapolis. He worked odd jobs as he began submitting his cartoons to publications, but his career plans were halted when he was drafted into the U.S. Army in the fall of 1942. Shortly after he left for basic training, his mom passed away at age 50 from cervical cancer.

Assigned to Company B in the Eighth Armored Battalion of the Twentieth Armored Infantry Division, Schulz trained as a machine gunner at Kentucky's Fort Campbell, rising to the rank of staff sergeant. His unit was shipped to Europe in February 1945, where they helped lead the charge on Munich and liberate the Dachau concentration camp. After Germany’s surrender, Schulz received the Combat Infantryman Badge for fighting in active ground combat under hostile fire. He was then sent to Camp Cooke in California, before earning his official discharge on January 6, 1946.

Schulz maintained his interest in cartooning during the war, developing an affinity for Bill Mauldin's Willie and Joe characters in the military publication Stars and Stripes, and afterward, he began working as an instructor at his old cartooning school. The job gave him the opportunity to hone his technique, and he finally had one of his pieces published in early 1947. That year also brought the debut of Schulz's weekly panel in the St. Paul Pioneer Press. Titled Li'l Folks, and attributed to the artist's childhood nickname of "Sparky," the cartoon featured prototypes of the soon-to-be iconic characters of Charlie Brown and Snoopy. Additional recognition came in 1948 when Schulz had the first of 17 cartoons published in The Saturday Evening Post. After multiple attempts to get Li'l Folks syndicated, Schulz scored a breakthrough when United Feature Syndicate purchased his strip in 1950. However, due to conflicts with other similarly named comics, he grudgingly agreed to retitle his strip Peanuts.

Peanuts made its official debut in seven newspapers on October 2, 1950. The inaugural four-panel comic, in which a boy remarks how he hates "Good ol' Charlie Brown," set the tone for its bald-headed hero. Before long, fans grew attached to the quirky, philosophical cast of characters; the oft-maligned Charlie Brown, who always strikes out and gets his kite stuck in a tree; bossy Lucy, and her security blanket-toting little brother, Linus; the Beethoven-loving Schroeder, his head always buried in his toy piano; and Snoopy, the pet who sleeps atop his doghouse and engages in imaginative midair battles with the Red Baron.

Schulz funneled his own life experiences into the strip: Snoopy was based on his old family dog, Spike (a name revived later with the introduction of Snoopy's brother). Lucy's cruel tendency to pull a football away from Charlie Brown was inspired by childhood antics. And the Little Red-Haired Girl, the never-seen source of Charlie Brown's romantic anguish, was drawn from an old girlfriend who had spurned Schulz's marriage proposal.

Peanuts earned Schulz the Reuben Award for Outstanding Cartoonist of the Year in 1955 (and again in 1964), and soon developed an appeal that transcended the boundaries of the funny pages. Exhibits of Peanuts originals were displayed at the Rhode Island School of Design and the University of Minnesota, and Schulz was honored by Yale University as its Humorist of the Year. By 1960, Charlie Brown, Snoopy and the crew were being featured in Hallmark greeting cards and advertisements for Ford automobiles.

In the early 1960s, Schulz was approached by a young television producer named Lee Mendelson for the purpose of filming a documentary. Although the documentary never aired, their meeting marked the start of a lifelong collaboration, and they soon teamed up to create the television special A Charlie Brown Christmas (1965). Featuring the animation of Bill Melendez, and a delightful score by jazz musician and composer Vince Guaraldi, the program was honored with both an Emmy and a Peabody Award in 1966. Additional TV specials soon followed, with Charlie Brown's All-Stars and It's the Great Pumpkin, Charlie Brown both airing that year.

Underscoring their standing as pop culture superstars, the Peanuts characters graced the cover of Time and were the subject of a hit song by The Royal Guardsmen. A stage production of You’re A Good Man, Charlie Brown debuted in New York City in 1967, and two years later, the feature-length film A Boy Named Charlie Brown opened at the Radio City Music Hall.

After the additions of such new faces as Peppermint Patty, Marcie and Franklin – Peanuts’ first African American character – Schulz and his team continued to churn out award-winning TV specials to accompany the strip. Additional feature-length movies included Snoopy Come Home (1972) and Bon Voyage, Charlie Brown (and Don’t Come Back!!) (1980).

Resuming his drawing after undergoing quadruple-bypass surgery in 1981, Schulz continued to handle the daily creation of his strip all by himself, even after developing a hand tremor in later years. However, when abdominal surgery brought a diagnosis of colon cancer in late 1999, the cartoonist announced he was retiring.

On February 12, 2000, the night before his final Peanuts cartoon was published, Schulz died in his sleep. At the time, Peanuts was reaching readers in 21 languages across some 2,600 newspapers in 75 countries. Altogether, Schulz produced more than 18,000 strips over nearly 50 years of work.

With its characters continuing to appear in daily newspapers, anniversary books, TV specials and commercials, the Peanuts empire has shown little signs of diminishing. Marking the 65th anniversary of his beloved strip's debut on October 2, 1950, Schulz was inducted into the California Hall of Fame in late September 2015. The honor came on the eve of a brand-new Peanuts 3D movie, which hit theaters in November 2015.

Schulz married Joyce Halverson in 1951 and adopted her young daughter, Meredith. The family grew as the couple had children of their own: Charles Jr. (Monte), Craig, Amy and Jill all arrived by 1958.

After several years in Colorado Springs, Schulz turned his sights westward by purchasing a 28-acre property in Sonoma County, California. The family set about renovating the grounds, adding such features as a swimming pool, a miniature golf course and horse stables. In 1969, Schulz opened the Redwood Empire Ice Arena in nearby Santa Rosa. Known as "Snoopy's Home Ice," the arena began hosting an annual hockey tournament in 1975.

Schulz and Joyce divorced in 1972, and the following year he married his second wife, Jeannie Clyde.