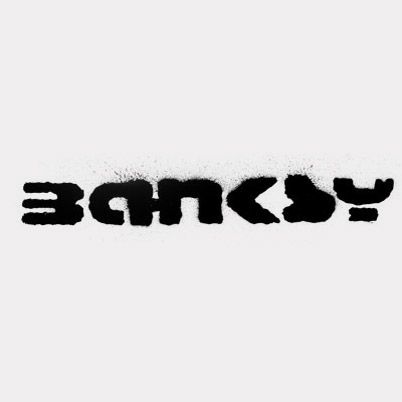 Banksy, a street artist whose identity remains unknown, is believed to have been born in Bristol, England, around 1974. He rose to prominence for his provocative stenciled pieces in the late 1990s. Banksy is the subject of a 2010 documentary, Exit Through the Gift Shop, which examines the relationship between commercial and street art.

Banksy's identity remains unknown, despite intense speculation. The two names most often suggested are Robert Banks and Robin Gunningham. Pictures that surfaced of a man who was supposedly Banksy pointed toward Gunningham, an artist who was born in Bristol in 1973. Gunningham moved to London around 2000, a timeline that correlates with the progression of Banksy's artwork.

Banksy began his career as a graffiti artist in the early 1990s, in Bristol's graffiti gang DryBreadZ Crew. Although his early work was largely freehand, Banksy used stencils on occasion. In the late '90s, he began using stencils predominantly. His work became more widely recognized around Bristol and in London, as his signature style developed.

What Is Banksy Known for?

Banksy's artwork is characterized by striking images, often combined with slogans. His work often engages political themes, satirically critiquing war, capitalism, hypocrisy and greed. Common subjects include rats, apes, policemen, members of the royal family, and children. In addition to his two-dimensional work, Banksy is known for his installation artwork. One of the most celebrated of these pieces, which featured a live elephant painted with a Victorian wallpaper pattern, sparked controversy among animal rights activists.

Other pieces have drawn attention for their edgy themes or the boldness of their execution. Banksy's work on the West Bank barrier, between Israel and Palestine, received significant media attention in 2005. He is also known for his use of copyrighted material and subversion of classic images. An example of this is Banksy's version of Monet's famous series of water lilies paintings, adapted by Banksy to include drifting trash and debris.

Banksy's worldwide fame has transformed his artwork from acts of vandalism to sought-after high art pieces. Journalist Max Foster has referred to the rising prices of graffiti as street art as "the Banksy effect." Interest in Banksy escalated with the release of the 2010 documentary Exit Through the Gift Shop. The film, which premiered at the Sundance Film Festival, was nominated for an Academy Award.

In October 2013, Banksy took to the streets of New York City. There he pledged to create a new piece of art for each day of his residency. As he explained to the Village Voice, "The plan is to live here, react to things, see the sights — and paint on them. Some of it will be pretty elaborate, and some will just be a scrawl on a toilet wall." During that month, he also sold some of his works on the street for $60 a piece, well below the market value for his art.