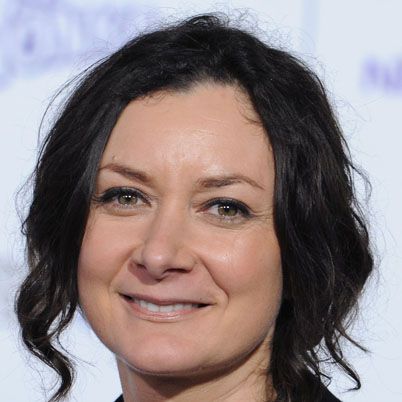 Who Is Sara Gilbert?

Sara Gilbert was born in 1975 in Santa Monica, California. Of her many television and film roles, she is best known as Darlene Conner-Healy on the sitcom Roseanne and its spinoff, The Conners. Gilbert has also appeared in films such as Poison Ivy (1992) and Riding in Cars with Boys (2001). The creative mind behind the daytime talk show The Talk, Gilbert also served as one of its co-hosts from its debut in 2010 until her departure in 2019.

Actress Sara Gilbert was born Sara Rebecca Abeles on January 29, 1975, in Santa Monica, California. Gilbert is part of her family's third generation in show business. Her grandparents were Harry Crane, a television writer most famous for The Honeymooners, and Julia Crane, a dancer who was once named "Miss Brooklyn." Meanwhile Gilbert's mother, Barbara Crane, was a producer and Hollywood talent manager.

Gilbert's two older half-siblings, Melissa and Jonathan Gilbert, were both child actors who starred on the NBC series Little House on the Prairie in the 1980s. Sara Gilbert says she decided to follow in her older siblings' footsteps to pursue acting because she was jealous of all the presents they received on the set of Little House on the Prairie.

In 1981, at the age of 6, Gilbert made her television debut in a Kool-Aid ad. After several years of acting in commercials, she landed a part in the TV movie Calamity Jane (1984).

In 1988 Gilbert received her big break: a central role in the ABC sitcom Roseanne. The show focused on the blue-collar family life of Roseanne Conner (played by Roseanne Barr), her husband (John Goodman) and their three children, soon becoming a huge hit. Gilbert depicted Darlene Conner, the sharp-witted and down-to-earth middle daughter.

The show originally ran for nine years, from 1988-'97, and Darlene's coming-of-age from a tomboyish youth to an artistic and politically engaged teenager was largely based on Gilbert's own life. Gilbert earned rave reviews for her comic and realistic portrayal of teenage life, earning three consecutive Young Artist Awards (1991-'93) and two Emmy Award nominations for Best Supporting Actress (1993 and '94). Gilbert also wrote one episode of Roseanne, "Don't Make Me Over," which aired during the fourth season.

'Roseanne' Reboot and 'The Conners'

Thanks in large part to Gilbert's efforts, the Roseanne cast agreed to reunite for a reboot in 2018. With the children now adults, and the family dealing with new topical issues, like the Donald Trump presidency, the show became a ratings smash upon its March 27 premiere. However, the good times came to a crashing halt two months later, when Barr's racist tweet about former President Barack Obama adviser Valerie Jarrett prompted ABC to cancel the show.

Fortunately for the cast and writers, ABC in June announced that it was moving forward with a spinoff, sans Roseanne, titled The Conners. Gilbert and several of her onscreen family members followed with a joint statement that said, "We all came back last season because we wanted to tell stories about the challenges facing a working-class family today. We are so happy to have the opportunity to return with the cast and crew to continue to share those stories through love and laughter."

The Conners debuted that October and concluded its season in January 2019, its ratings strong enough to earn a second season on ABC.

Between the original run of Roseanne and its reboot and spinoff, Gilbert was best known for her work on the daytime talk show The Talk. Along with earning credit as the show's creator, Gilbert served as one of its original co-hosts, along with Julie Chen, Sharon Osbourne, Leah Remini and Holly Robinson Peete, when it debuted in 2010.

The Talk managed to carve out a niche in the competitive daytime talk show landscape thanks to its focus on issues through the lens of motherhood. The program was still humming along when Gilbert made her final appearance as co-host in August 2019.

Gilbert has made numerous film and television appearances outside of her well-known projects. Her most notable film credits include High Fidelity (2000), with John Cusack, and a pair of films with Drew Barrymore: Poison Ivy (1992) and Riding in Cars with Boys (2001).

Gilbert returned to television in 2001, co-starring with Jim Gaffigan in the short-lived CBS show Welcome to New York. A year later, she landed a recurring role on the popular Fox drama 24, and from 2004 to 2007 she played Dr. Jane Figler on NBC's medical drama ER while also starring in the WB comedy series Twins. Gilbert has also put in guest appearances in a long list of popular TV shows, including The Simpsons, Will & Grace and Law & Order.

Beginning in 2007 she enjoyed a recurring role as Leslie Winkle on The Big Bang Theory, and in 2014 she co-starred on the lone season of Bad Teacher. Gilbert also regularly appeared on Living Biblically, produced by her former Roseanne and The Big Bang Theory colleague Johnny Galecki, though the comedy quickly came and went in 2018.

Following her departure from The Talk, Gilbert signed on for a recurring role in the Netflix series Atypical.

While still starring in Roseanne, Gilbert attended Yale University. She graduated in 1997 with a B.A. in art and a concentration in photography.

Apart from her acting work, Gilbert is a political activist focused on animal rights, environmental and public health issues. She is a longtime vegan who has worked extensively with the advocacy group People for the Ethical Treatment of Animals, which named her Roseanne character as one of the most animal-friendly TV characters in history. Gilbert also works with Earth Communication Office, a foundation dedicated to raising awareness of environmental causes. She has also volunteered for the Elizabeth Glaser Pediatric AIDS Foundation and AIDS Project L.A.

In 2013, Gilbert announced her engagement to musician Linda Perry of 4 Non Blondes fame. They married in March 2014, and welcomed a son, Rhodes Emilio Gilbert-Perry, on February 28, 2015. In December 2019, it was reported that the couple had separated.

Gilbert first publicly discussed her sexual orientation in 2010, in advance of the launch of The Talk.

"I don't think [being out] will be a problem," she said. "I don't ever really think of things as being out or in & I just think I am who I am, and when topics come up that are appropriate, I'll talk about them and share when it seems right."