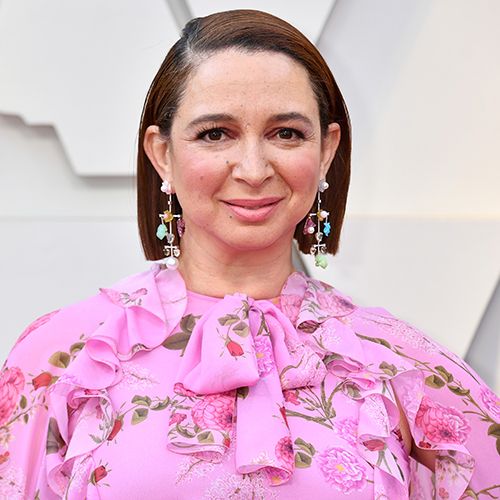 Who Is Maya Rudolph?

Maya Rudolph is an actress and comedian who first put her interest in acting to work with the Groundlings. When a producer for Saturday Night Live saw her perform with the acting troupe, Rudolph was brought to New York and joined the SNL cast in 2000. On SNL, she became a featured player known for impersonations of such celebrities as Christina Aguilera, Oprah Winfrey and Donatella Versace. Rudolph has also appeared in films like Bridesmaids and Inherent Vice, contributed voice work to major animated features like The Angry Birds Movie and enjoyed recurring roles in TV series like The Good Place.

Maya Rudolph was born in Gainesville, Florida, on July 27, 1972, to father Richard, a music writer and producer, and mother Minnie Riperton, a singer who hit the top of the pop charts in 1974 with "Lovin' You."

After moving from Gainesville to Southern California, when Rudolph was almost seven, her mother died of breast cancer. Shortly after, Rudolph began singing and appearing in local theater, which she did throughout childhood.

After high school, she enrolled in the photography program at the University of California at Santa Cruz, where she formed the band Super Sauce. Super Sauce wouldn't be Rudolph's last band, as she went on to play keyboards for The Rentals, a Weezer spin-off band, in the mid-1990s, and later co-founded a Prince cover band, Princess.

Post-graduation, Rudolph joined the Groundlings, a popular and edgy comedy troupe. After performing with the Groundlings and getting her bearings in the acting performing arena, Rudolph began landing small parts in films such as As Good As It Gets (1997) and Gattaca (1997), as well as a recurring role on the medical drama Chicago Hope during the 1996-97 season.

Rudolph's career took a major turn when a Saturday Night Live producer saw her performing with the Groundlings in late 1999. She soon auditioned for the show in New York and joined the cast in 2000 as a featured performer.

Rudolph brought to the table a unique blend of acting and musicality, always mixed with a madcap comedic streak, and this range led to a promotion to full cast member in late 2001. She developed a true following on the show through the often outrageous characters she would create or, more often, the real-life characters she would impersonate. Her over-the-top but somehow dead-on impersonations of such celebrities as Donatella Versace, Oprah Winfrey and Christina Aguilera made her one of the stars of the show, and her comedic skills led not only to a larger part on the show, but to more and more non-SNL roles.

Rudolph's work on the big screen continued after she joined the cast in such films as the comedy Chuck and Buck and the musically oriented Duets (both in 2000), the latter of which allowed her to work with childhood friend Gwyneth Paltrow. She followed these with a few more projects, notably a recurring role on TV's City of Angels (2000) and in the romantic comedy 50 First Dates (2004), with Adam Sandler.

In 2005, Rudolph took a break, going on maternity leave, her pregnancy now a part of film history as it was captured via her role in the ensemble of Robert Altman's A Prairie Home Companion (2006).

Upon her return, Rudolph kept busy with Saturday Night Live and with several film projects. She scored a leading role in the quirky independent film Idiocracy in 2006, and in 2007, Rudolph lent her vocal skills to the animated hit Shrek the Third. That year she also brought her SNL tenure to a close, marking her final season with an NAACP Image Award nomination for Outstanding Actress in a Comedy Series.

Off the SNL set for good, Rudolph appeared on the NBC version of the Australian hit show Kath & Kim and took the lead in the thoughtful independent film Away We Go in 2009. She also reprised her voiceover role in Shrek Forever After (2010), the fourth installment in the franchise, and appeared in several high-profile comedies, including Grown-Ups (2010), The Zookeeper (2011) and the international smash hit Bridesmaids (2011).

Rudolph invested time on the small screen to be cast as a lead in NBC's Up All Night (2011-12), before appearing in other films like Inherent Vice (2014), Maggie's Plan (2015), Sisters (2015), Popstar: Never Stop Never Stopping (2016), Life of the Party (2018) and Wine Country (2019). She also co-starred with fellow SNL alum Fred Armisen for one season of Forever, about a couple reunited after their separate deaths, and landed a recurring role in another afterlife-themed comedy, The Good Place.

Besides her contribution to the Shrek franchise, Rudolph has lent her voice to a variety of other animated films like The Nut Job (2014), The Angry Birds Movie (2016) and The Emoji Movie (2017). On television, she voices Aunt Cass on the superhero comedy Big Hero 6: The Series; Betty Hart on Bless the Harts; and a variety of characters on Big Mouth.

Rudolph has been with director Paul Thomas Anderson since 2001. Their first daughter, Pearl Minnie, was born in October 2005, and Lucille and Jack followed in 2009 and 2011, respectively. In 2013, the couple welcomed another daughter, Minnie Ida.