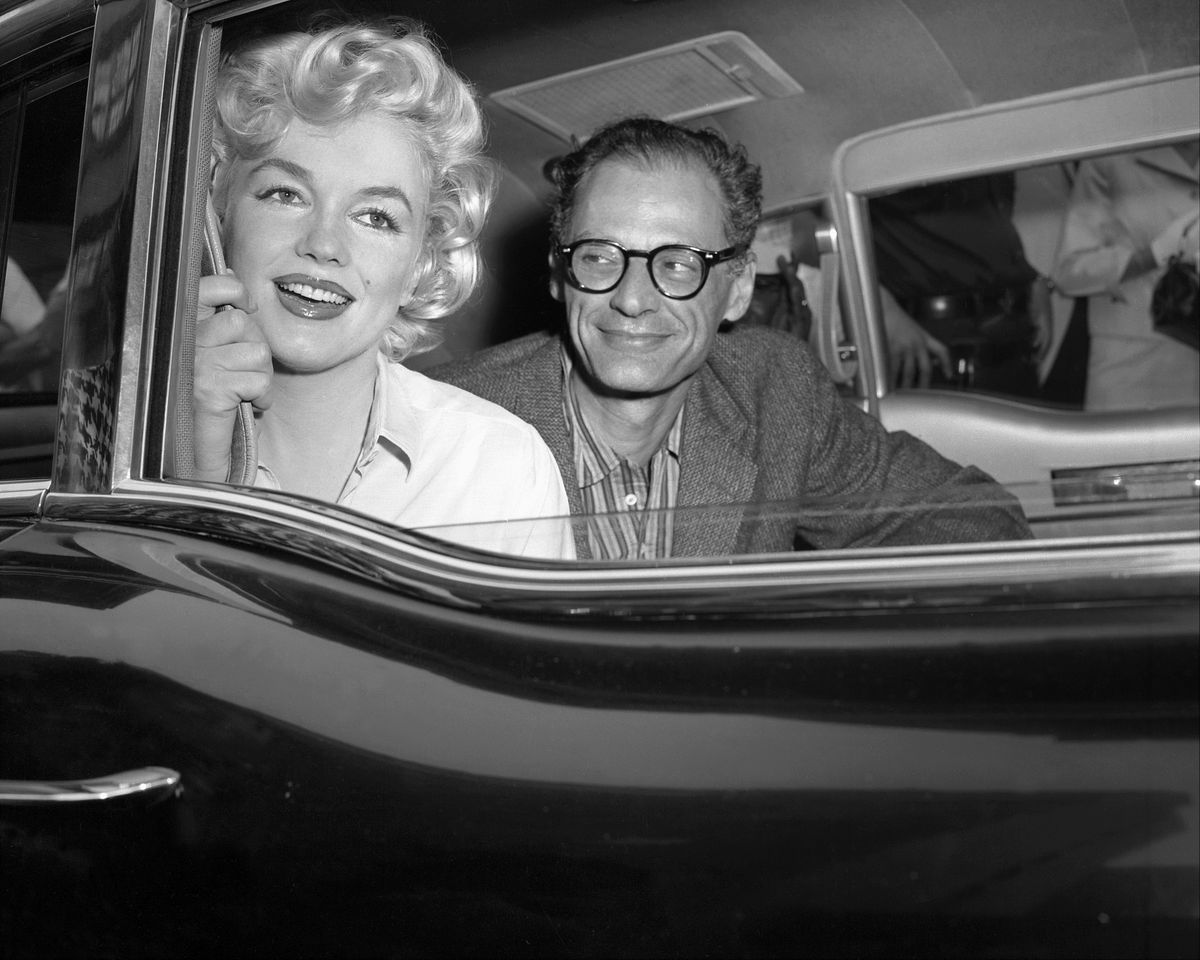 Marilyn Monroe's longest marriage was with third husband Arthur Miller. The two were complete opposites: a movie star sex symbol in love with a cerebral, award-winning playwright. But in the end, Miller, just like second spouse Joe DiMaggio, wasn't enough for the fragile actress. In addition to marital stressors like failed pregnancies, misunderstandings and clashes over work, Monroe's demons, evinced in her drinking and drug use, proved impossible to escape.

Monroe first encountered Miller in 1950. At the time she was still trying to find fame, while he was already acclaimed as one of the country's leading playwrights, thanks to his Pulitzer Prize-winning Death of a Salesman. Monroe was also sleeping with Miller's friend, director Elia Kazan, who was in Los Angeles to pitch a screenplay with Miller.

When Miller, instructed by Kazan, took Monroe to a party, he didn't act on his obvious attraction to her. Monroe believed this indicated his respect for her, which was more than enough to make him stand out from other men she knew. She told a friend of the encounter, "It was like running into a tree. You know, like a cool drink when you’ve had a fever."

Monroe saw Miller off at the airport in January 1951 when he returned to New York. He'd told her how unhappy his current marriage was, so she expected he'd soon return. In the meantime, she placed his photo on a bookshelf above her pillow. But though the two exchanged letters — Monroe bought a biography of Abraham Lincoln that Miller recommended in one note — he stayed in New York.

Monroe and Miller didn't meet again in person until 1955 after she'd moved to New York City to study at the Actors' Studio. With her most recent marriage to DiMaggio lasting less than a year, she was single and still very much interested in Miller. Monroe even forged a relationship with his friends Norman and Hedda Rosten to get closer to the playwright.

Soon Miller and Monroe embarked upon an affair, despite the fact that he remained a married man. However, in the years since they'd first met, she'd become a star. This meant the press paid close attention to every move Monroe made, and their affair couldn't remain a secret.

Monroe wanted to be with Miller, who seemed to offer her both love and the sense of security she'd always yearned for. She also liked the idea of being seen as a serious actress who was partnered with a renowned playwright. Miller was reluctant to leave his wife, but he was very much in love with Monroe; in one letter, he told her, "I believe that I should really die if I ever lost you." In the spring of 1956, he went to Nevada to establish residency so he could divorce his wife.

Monroe stood by Miller during his HUAC testimony

While Miller was in Nevada, he submitted a passport application so he could accompany Monroe to England for a film shoot. However, his application resulted in a subpoena to appear before the House Un-American Activities Committee to testify about his ties to Communism. On June 21, 1956, Miller was in Washington, D.C., to appear in front of HUAC.

Miller had never been a member of the Communist Party, but he had gone to party-affiliated meetings in the 1940s. He decided not to invoke his Fifth Amendment right against self-incrimination and answered questions about his own actions — but he refused to share the names of any other attendees. This meant he was likely to receive a contempt citation from Congress. Given their relationship, Monroe, therefore, risked losing the affection of the moviegoing public.

Monroe was counseled to distance herself from Miller or possibly see her career go up in smoke. However, she ignored this advice, remaining loyal to Miller both publicly and privately. Her devotion was a boon for Miller, as it was hard to get the public to turn against a man who'd won the heart of an American goddess. 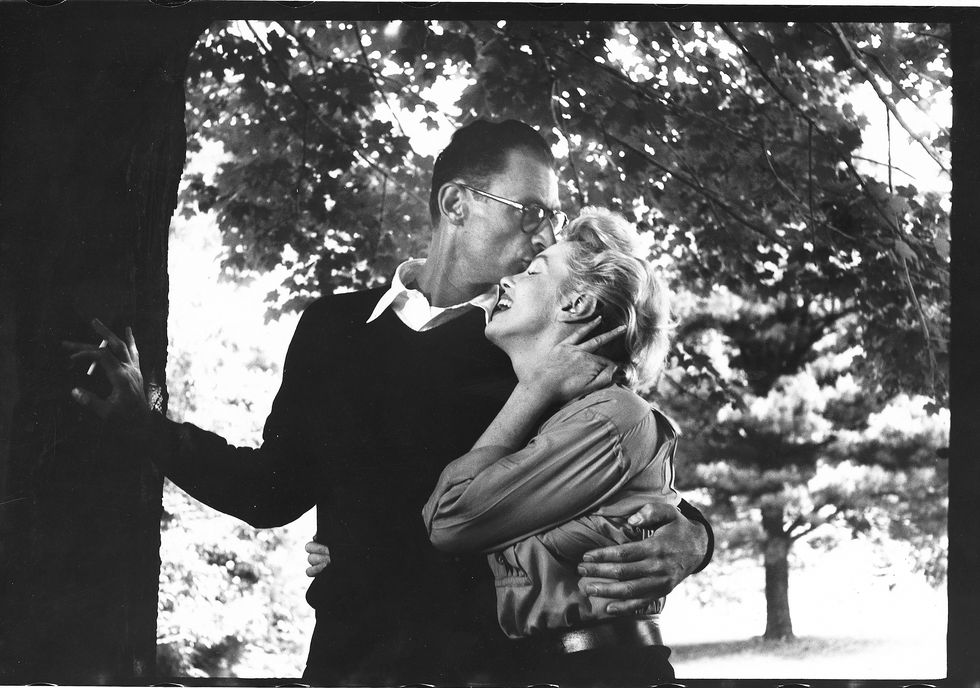 Arthur Miller kissing Marilyn Monroe on the forehead as he embraces her under a tree on his farm just after their marriage.
Photo: Ken Heyman/The LIFE Images Collection/Getty Images

Miller and Monroe married in 1956 but had problems immediately

Though Miller was cited for contempt (his subsequent conviction would eventually be overturned on appeal), he did get his passport. Miller and Monroe got married on June 29, 1956, in a judge's office in White Plains, New York; a Jewish ceremony followed on July 1. Together, they next headed to England so Monroe could work on The Prince and the Showgirl with Laurence Olivier.

Monroe was delighted by her marriage, saying at one point, "This is the first time I’ve been really in love." But the movie shoot didn't go smoothly and she clashed with Olivier. Then she happened upon notes Miller had been making about her. The exact words she read are unknown, but they related that Miller was disappointed by their marriage and sometimes found Monroe embarrassing.

Monroe told Lee and Paula Strasberg about what Miller had written. "How he thought I was some kind of angel but now he guessed he was wrong. That his first wife had let him down, but I had done something worse." She'd idealized Miller and was devastated by what she viewed as a betrayal.

Adding to the stress of the marriage, Monroe suffered several miscarriages

Monroe's discovery in England wasn't enough to end her marriage. She and Miller would have happy moments, such as when he dedicated an edition of his collected plays to her. Monroe also tried to embrace a quieter life of cooking and homemaking. But these moments of happiness were interrupted by other problems.

Monroe was particularly devastated by her inability to give birth to Miller's child. She experienced a miscarriage in September 1956, lost an ectopic pregnancy in August 1957, and had a second miscarriage in December 1958, shortly after she'd finished shooting Some Like It Hot. A regular user — and abuser — of pills and alcohol, Monroe blamed herself for the last miscarriage.

Miller was finding the peace and emotional quiet he required to write lacking, while Monroe had come to resent her husband. She didn't like that he'd ignored his principles and did a lackluster rewrite of scenes for her film Let's Make Love. And when she had an affair with co-star Yves Montand, she noted that Miller didn't fight for her, or even object to the liaison.

Their marriage ended after less than five years

Monroe and Miller's relationship reached its end point while they worked together on what would be her final film, The Misfits. The movie script, based on a short story by Miller, had initially been intended to help her be seen as a serious actress. Yet by the time the film was shooting in the summer of 1960, she disliked the script, declaring at one point, "Arthur said it’s his movie. I don’t think he even wants me in it. It’s all over. We have to stay with each other because it would be bad for the film if we split up now."

The shoot was made harder for Monroe by Miller's rewriting, as she had trouble learning the last-minute dialogue. Her ongoing substance abuse also made it difficult to get work done on the film. Due to these issues, she was hospitalized for a week in Los Angeles.

Monroe managed to come back and complete the movie, but by then her marriage to Miller was over. Their plans to divorce were announced on November 11, 1960. Monroe traveled to Mexico on January 20, 1961, to obtain a divorce — a date chosen in the hopes that John F. Kennedy's inauguration would distract media attention.

READ MORE: How Marilyn Monroe's Childhood Was Disrupted by Her Mother's Paranoid Schizophrenia

Miller did not attend Monroe's funeral

Reflecting on her relationship with Miller, Monroe admitted, "I wasn’t sweet all through. He should love the monster, too. But maybe I’m too demanding. Maybe there’s no man who could put up with all of me. I put Arthur through a lot, I know. But he also put me through a lot." Her relationship with Miller, and everyone else, came to an end after she died from a drug overdose on August 5, 1962. Miller opted not to attend her funeral, noting, "She won’t be there."

In January 1964, Miller's play After the Fall premiered in New York. One character, Maggie, had the same background, mannerisms and self-destructive tendencies of Monroe. Maggie was a singer, not an actress, but she was obviously based on Miller's ex-wife, with her portrayer even donning a blonde wig.

Miller was widely criticized for turning Monroe and her pain into material for a play, though he denied the connection. He went on to include characters with links to Monroe in other works, including the 2004 play Finishing the Picture, which was based on the chaotic shoot of The Misfits. Though their relationship had ended years before, he obviously never forgot her.