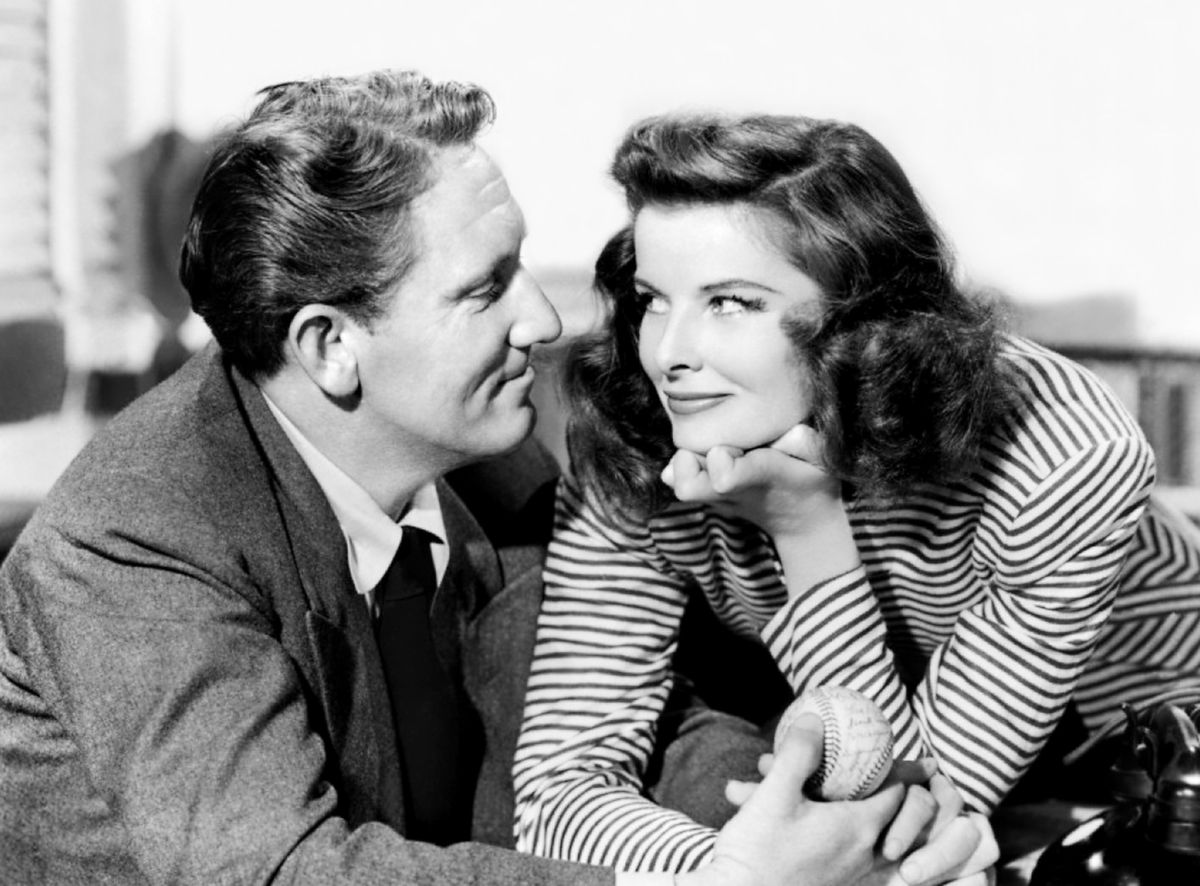 A love relationship as complicated as it was devoted, the bond between screen greats Katharine Hepburn and Spencer Tracy stretched across three decades and nine films including Woman of the Year and Guess Who’s Coming to Dinner. But their offscreen union would remain publicly unacknowledged throughout Tracy’s life as the couple maintained separate residences and never wed.

“It was a unique feeling I had for [Tracy],” Hepburn wrote in her autobiography Me: Stories of My Life. “I loved [him]. … I would have done anything for him.” Lauren Bacall, who with her husband Humphrey Bogart were close friends with the couple, once wrote Hepburn was “blindingly” in love with Tracy.

Hepburn was the daughter of a respected Hartford, Connecticut surgeon and suffragist mother. An encouraged scholar and fiercely independent free-thinker from an early age, one childhood summer she cut her hair short and insisted on being called “Jimmy.” Tracy was born into a devout Catholic family in Milwaukee, Wisconsin, his father a truck salesman. A mercurial child with little interest in formal education, he found escape in the form of motion pictures.

They first met on the set of the comedy-drama Woman of the Year (1942), playing two journalists who fall in love and try to balance their personal lives with their commitment to their careers. Tracy was 41-years-old, Hepburn was 34 and said of the meeting she “knew right away that [she] found him irresistible.”

Onscreen their chemistry was undeniable, and audiences flocked to their films to witness the staccato, quick-witted bantering and long, meaningful looks that spoke more than any lines of dialogue could represent. Such ease together in front of the camera often had fans assuming Hepburn and Tracy were simply playing themselves. Their chemistry would be captured in eight more films including Keeper of the Flame (1942), Adam’s Rib (1949), Pat and Mike (1952), Desk Set (1957) and their final appearance together in Guess Who’s Coming to Dinner (1967).

Performer Gene Kelly once recalled Hepburn and Tracy getting together at lunchtimes at the studio, where “they’d just meet and sit on a bench on the lot. They’d hold hands and talk – and everybody left them alone in their little private world.” 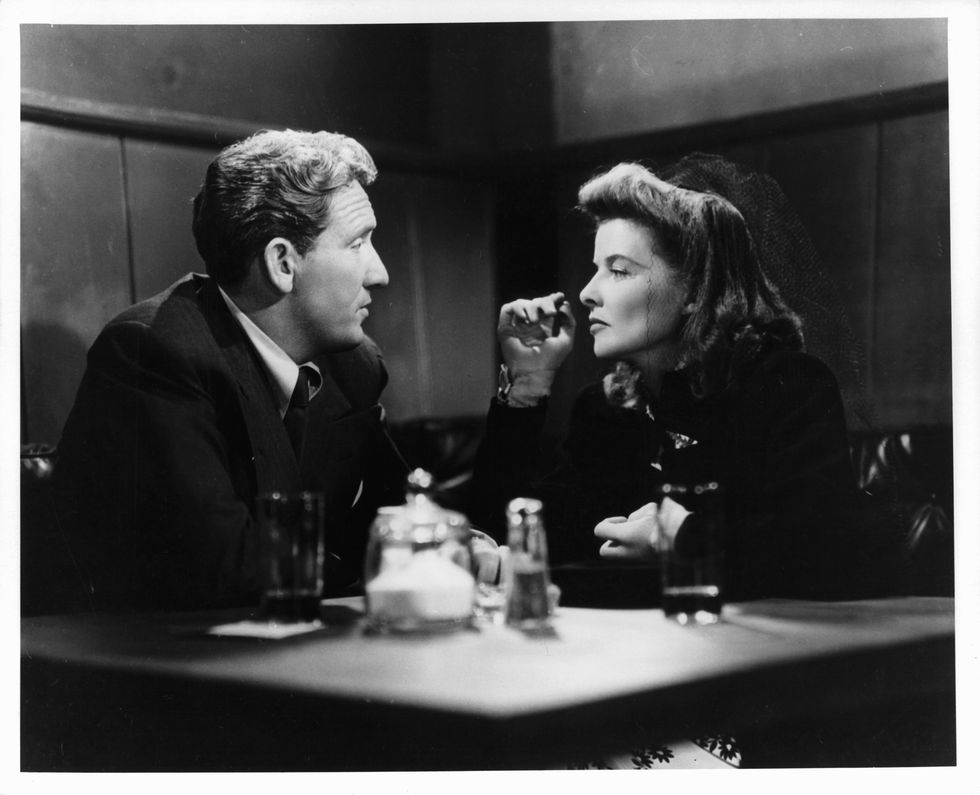 Spencer Tracy and Katharine Hepburn in a scene from "Woman Of The Year"
Photo: Metro-Goldwyn-Mayer/Getty Images

Tracy was a devout Catholic, so divorcing his wife was not an option

Though an open secret in and around Hollywood, the relationship was kept under wraps by the studio system. Hepburn had been married previously to Pennsylvania businessman Ludlow Ogden Smith but had divorced in 1934. Tracy married actress Louise Treadwell in 1923 and the union produced two children, a son John (b. 1924), and a daughter Susie (b. 1932). John was diagnosed deaf as an infant and Tracy felt profound guilt over his son’s hearing impairment, believing it was a punishment for his own sins and began distancing himself from his family.

A strict Catholic, divorce was not and would never be an option for Tracy, who remained married to his wife throughout his life. An early separation would end in reconciliation, but Tracy would continue to live much of his life in hotels and rented residences away from his wife and family.

Tracy would never publicly acknowledge or articulate his feelings for Hepburn, a position that would only fuel the myths that would flourish around their relationship. They were rarely seen in public together, their separate homes helping to ensure Tracy’s wife would be protected, along with the interests of gossip-adverse studio heads fearful of audience backlash over the apparent infidelity that was in breach of the morality clauses big stars of the era were forced to sign.

READ MORE: How Spencer Tracy and Katharine Hepburn Inspired the Characters Sam and Diane From Cheers

Alongside attempts at keeping his relationship with Hepburn out of the media, Tracy was also battling inner demons. Burdened by Catholic guilt over his family circumstances, he suffered regular bouts of anxiety, depression and insomnia, and tried to overcome alcoholism throughout much of his adult life.

Hepburn, who once described Tracy as “tortured,” said that all she wanted was for him “to be happy, safe, comfortable. I liked to wait on him, listen to him, feed him, work for him. I tried not to disturb him… I was happy to do this.”

Though devoted to Tracy, Hepburn continued to act, choosing roles that interested her more than fare guaranteed to be box office hits. Often away on location, she helped encourage the idea that they were not a couple and lived completely separate lives. When Tracy’s health began to deteriorate in the late sixties, Hepburn took time away from her career to care for him, saying she just wanted “to be there so that he wouldn’t worry or be lonely.”

Rumors about Hepburn’s and Tracy’s sexual orientation would circulate during their lives and continue to fuel media reports long after their deaths. A forthright woman in Hollywood who appeared to require nothing from men, Hepburn was often labeled a lesbian; while Tracy’s alleged yet hidden homosexuality was presented as another factor contributing to his depression and alcoholism.

“They were merely friends…. They were not in the bed department at all,” according to Scotty Bowers, an ex-hustler and male “madam” to the stars of old Hollywood. In the 2018 documentary Scotty and the Secret History of Hollywood, Bowers claims to have slept with Tracy and procured female sex partners for Hepburn multiple times.

Whether the relationship was a cover to hide what was then considered improper or one of the greatest romantic unions on and off the big screen, the affection between Tracy and Hepburn existed until their deaths. Hepburn was with Tracy when passed away in 1967, though she did not attend the funeral out of respect for his family and never publicly spoke of their relationship until after the death of Tracy’s wife Louise in 1983.

Hepburn was once asked why she stayed with Tracy for so long under the circumstances. “I honestly don’t know,” she replied. “I can only say that I could never have left him. [We] just passed 27 years together in what was to me absolute bliss.”