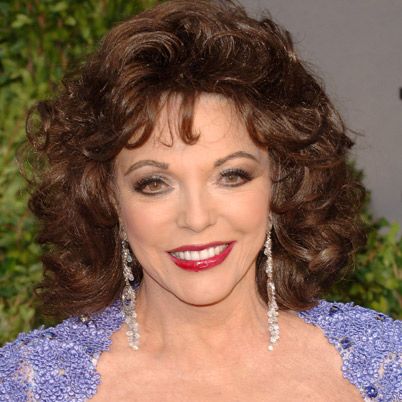 Joan Collins was born on May 23, 1933, in London, England. She landed her first film role in the 1951 movie Lady Godiva Rides Again. For the next three decades, she punctuated a series of B-movie roles with frequent TV appearances and pin-up shoots. In 1981, Collins was called to an audition for Dynasty, and took the role of Alexis Carrington Colby. After Dynasty, Collins continued to act and write.

Actress Joan Henrietta Collins was born on May 23, 1933, in London, England. She is the eldest child of Elsa Bessant Collins, a former nightclub hostess, and Joseph William Collins, a successful talent agent whose clients included Tom Jones and the Beatles. Her British-born Anglican mother and South African-born Jewish father had two more children together: Jackie (a successful novelist whose books have sold more than 400 million copies) in 1937, and Bill in 1946.

Joan Collins was so pretty as a baby, that her mother hung a sign on her stroller warning over-eager well-wishers, "Do Not Kiss." During World War II, the Collins family hunkered down in Tube stations with other Londoners while German bombs rained down on the city. Collins's mother died in 1962. Her father remarried, and had another daughter 35 years younger than Joan.

Joan Collins moved to Hollywood in the 1950s with dreams of becoming a star. She landed her first film role, as an uncredited beauty pageant contestant, in the 1951 movie Lady Godiva Rides Again. For the next three decades, she punctuated a series of B-movie roles with frequent television appearances and pin-up shoots. She became a Hollywood fixture, driving a signature pink Thunderbird and racking up high-profile liaisons with leading men including Dennis Hopper, Harry Belafonte and Warren Beatty.

She appeared in The Stud and The Bitch, both wildly popular film adaptations of her sister Jackie's novels. In 1978, she published her first memoir, Past Imperfect, a lascivious account of her affairs. It became a bestseller.

In 1981, Collins was called to an audition for Dynasty, then a struggling primetime drama in its second season, after actress Sophia Loren had turned down the part. She took the role of Alexis Carrington Colby, the vicious, vengeful ex-wife of patriarch Blake Carrington (played by John Forsythe). Ratings immediately shot up. Producers credited Collins with resuscitating the show's ratings. We didn't write Joan Collins," said show creator Aaron Spelling. "She played Joan Collins. We wrote a character, but the character could have been played by 50 people and 49 of them would have failed. She made it work."

Collins was nominated six times for a Golden Globe, finally winning one in 1983. She also received an Emmy nod for her performance on the show. Fans so identified Collins with her unapologetically vengeful character, that more than two decades after the show's finale people continued to identify her on the street as Colby. Dynasty ended its television run in 1989, but Collins again appeared as Colby in the 1991 miniseries Dynasty: The Reunion

Joan Collins's off-camera life was often as dramatic as the roles she played. She married her first husband, Irish actor Maxwell Reed, in 1952 and divorced him in 1956 after, Collins claimed, he attempted to sell her to an Arab sheik for a one-night stand. She married second husband Anthony Newley in 1963, and had a daughter and a son with him before their divorce in 1970.

She had daughter Katy with her third husband, Apple Records president Ron Kass, during their 11-year marriage, which began in 1972. Her fourth marriage, to Swedish pop singer Peter Holm, ended after just 13 months in a messy 1987 divorce. In February 2002, Collins married her fifth husband, theater company manager Percy Gibson, who is 32 years her junior. They renewed their vows in 2009.

After Dynasty, Collins continued to act and write, penning self-help beauty books along with romance novels full of mystery and murder. In 1996 she became embroiled in an embarrassing legal battle with her fiction publisher Random House, which accused Collins of breaking a two-book contract worth $4 million. A jury found in Collins' favor after a much-gossiped about public trial, in which her writing talents were disparaged in court.

After more than a half-century in show business, Collins continues to act, write and perform charity work. Her official website and blog are bedecked with photographs of a Collins in satin and jewels, proof that the actress has not lost her flair for the dramatic.

On September 19, 2015, Joan Collins' younger sister, Jackie, died from advanced breast cancer. Jackie had been fiercely private about her illness, which was diagnosed six and a half years ago, only telling her sister two weeks before her death. In what would be her last interview, Jackie told People on September 14 that she didn't want to burden Joan with the news, citing "it would have really affected her. I just felt she didn't need it in her life. She's very positive and very social but I'm not sure how strong she is, so I didn't want to burden her with it."

Although Joan was shocked when Jackie relayed the news, the two bonded even more.

"She was my best friend, " Joan stated about her sister's death. "I admire how she handled this. She was a wonderful, brave and a beautiful person and I love her."