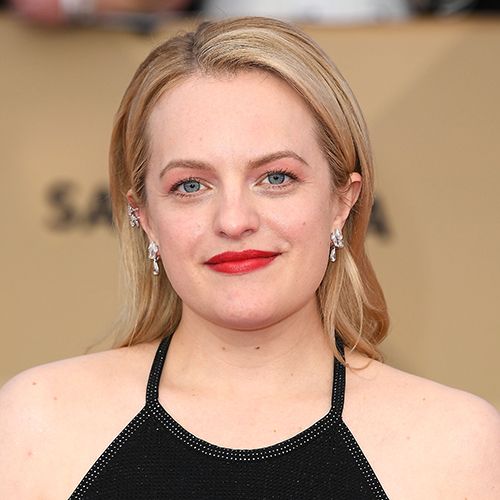 Who Is Elisabeth Moss?

Elisabeth Moss began her performing career as a ballet dancer but switched to acting with a breakout role in Girl, Interrupted. The young actress enjoyed a long-running role as the president's daughter on the popular drama The West Wing, before starring in the acclaimed AMC series Mad Men as Peggy. She later snagged a Golden Globe Award in 2014 for her work on the miniseries Top of the Lake, and both Emmy and Golden Globe wins for her lead role in The Handmaid's Tale.

Elisabeth Moss was born on July 24, 1982, in Los Angeles, California, to musicians Ron, a jazz artist and manager, and Linda, who plays blues harmonica. Moss described herself as being a "serious, focused" child. She excelled at school and her favorite childhood pastime was playing "library" — a game that involved her stacking books on the staircase and checking them out to her parents.

Growing up in a show business family, Moss says she always wanted to be a performer. "I can't explain how I knew," she says. "There wasn't one defining moment. But you just know."

Moss made her professional acting debut at the age of six in the TV miniseries Lucky Chances, but as a child she focused primarily on dancing rather than acting. She traveled to New York to study at the School of American Ballet and then to Washington, D.C., to study with Suzanne Farrell at the Kennedy Center.

"It took all the pressure off of auditioning for acting roles," she recalls. "If I didn't get a job, I just went on dancing. It saved me from becoming that nine-year-old who has everything riding on getting that one part." She adds, "We all know that nine-year-old, and she's not a pretty picture."

Nevertheless, at the age of 10, Moss did get that breakthrough part, playing Baby Louise opposite Bette Midler in the film adaptation of the Broadway musical Gypsy.

Moss was home-schooled by a private tutor and managed to graduate from high school two years early, in 1999, at the age of 16.

At 16, Moss landed a role opposite an Oscar-winning Angelina Jolie in the film Girl, Interrupted. Moss was so convincing as Polly, a teenage burn victim, that throughout filming costar Whoopi Goldberg believed she was an actual burn victim hired to play the part. "Whoopi really didn't know — a lot of people didn't, actually," Moss recalls. "But I would forget too, and then look in the mirror and be shocked. And that shocked feeling is right for Polly, the character — she's a child, she does forget about it."

Around the same time she filmed Girl, Interrupted, Moss also began a long-running role as the president's daughter Zoey Bartlet on the TV series The West Wing. "I played her from when I was 17 to 24, off and on," she says. "That show was so well researched, but obviously I have no idea what it's like to be the president's daughter. I just tried to show a regular girl — with the Secret Service outside her dorm room."

Moss landed her most visible role to date on the series Mad Men in 2007. Set in early 1960s New York City, the show tells the story of the employees of Sterling Cooper, an advertising agency on Madison ("Mad") Avenue. Moss played Peggy Olson, a secretary-turned-copywriter who demands equality with the show's dominant male characters. Moss earned wide acclaim for her portrayal of Peggy, a character whom critics described as a cipher. "I like that they don't understand Peggy," she says. "That makes the performance more interesting."

During her time on Mad Men, Moss earned several Emmy and Golden Globe award nominations for her work on the show, including a 2015 Emmy nomination for Lead Actress in a Drama. The series enjoyed great acclaim throughout its run, winning numerous Golden Globe and Emmy Awards.

'Speed-the-Plow,' 'Top of the Lake' and 'The Heidi Chronicles'

In addition to her work on Mad Men, Moss made her Broadway debut in the David Mamet play Speed-the-Plow in 2008. She followed that with an appearance on the big screen opposite Jonah Hill and Russell Brand in the 2010 comedy Get Him to the Greek.

Moss later earned acclaim for her 2013 miniseries Top of the Lake. She played a detective on the show and earned a Golden Globe award for her performance. The following year, Moss co-starred with Mark Duplass in the romantic dramatic comedy The One I Love. They play a couple who takes a weekend away to try to repair their relationship. That same year Moss also starred in the indie film Listen Up Phillip, which was directed by Alex Ross Perry, with whom she would continue to collaborate in the coming years.

In 2015, Moss took to the Broadway stage to appear in the revival of Wendy Wasserstein's hit play The Heidi Chronicles. She received a Tony Award nomination for her work. Later that year she co-starred in the big-screen newsroom drama Truth and in Queen of Earth (another Alex Ross Perry collaboration). In 2016 Moss worked alongside Liev Schreiber in the biopic Chuck, based on pro heavyweight boxer Chuck Wepner's life.

In 2017 the actress began starring in the series The Handmaid's Tale, an adaptation of Margaret Atwood's 1985 novel about a dystopian future in which fertile women serve an autocratic regime as child-bearing vessels. Moss's performance as Offred, a surrogate attempting to reclaim independence, drew viewers to one of the year's most celebrated programs, leading to Emmy and Golden Globe wins for her work.

Following the cliffhanging end to season 1 — and the novel — in which a pregnant Offred steps into a van to meet an uncertain fate, the highly anticipated second season debuted in April 2018. Moss seemed eager to discover how fans would handle the events of the new season, telling The Hollywood Reporter after a screening of its premiere that she was there to watch the audience respond to its squirm-inducing final scene.

Season 2 and season 3 — which debuted in June 2019 — again impressed critics, with Moss drawing more glowing reviews and award nominations for her work.

Moss remained busy on the big screen between her commitments to The Handmaid's Tale, appearing in the 2018 features Seagull and The Old Man & the Gun and reuniting with Alex Ross Perry to star in Her Smell. The following year she made the most of her limited screen time in Jordan Peele's horror film Us and featured prominently in the crime drama The Kitchen, alongside Melissa McCarthy and Tiffany Haddish. Moss then began 2020 on a strong note with her starring role in the well-received reboot of The Invisible Man.

Moss credits her lifelong faith in Scientology in helping navigate the ups and downs of Hollywood. "I feel it has given me a sanity and a stability that I am not sure that I would have necessarily had," she says. "In my line of work I am often in very stressful situations, in which you would often get totally nervous or clam up — you know, going on stage in front of 2,000 people. It's an applied philosophy. And L. Ron Hubbard definitely believed, and as Scientologists we believe, that the arts inject the spirit of life into our culture."