With a booming voice, outsize physicality and penchant to go as far as he could with his routines and then just a little further, Chris Farley delivered out-of-control characters that made him a comedy star. But his push-the-envelope approach also spilled into real life, with a seemingly insatiable appetite for food, booze and drugs.

His death, on December 18, 1997, from an accidental drug overdose at age 33, drew comparisons to one of his idols, fellow comedian and Saturday Night Live player John Belushi, who passed away in 1982 at the same age, also from a drug overdose.

Both were larger-than-life characters on- and off-screen. Both delighted fans with their edgy character turns on SNL and translated that success into big-screen Hollywood roles. At the time of his death, Farley was commanding a reported $5 million per picture.

“I used to think that you could get to a level of success where the laws of the universe didn’t apply,” Farley said to Playboy in 1997. “But they do. It’s still life on life’s terms, not on movie-star terms. I still have to work at relationships. I still have to work on my weight and some of my other demons. Once I thought that if I just had enough in the bank, if I had enough fame, that it would be all right. But I’m a human being like everyone else. I’m not exempt.”

Farley would joke about his size as a defense mechanism

Before he was a comedy star he was an athlete. The son of a road-paving contractor with three brothers and one sister grew up in Madison, Wisconsin. Farley’s big frame was an advantage in the swimming pool and on the football field, and by his senior year of high school, he stood five feet nine inches and weighed around 230 pounds.

His size was often mocked by his classmates and to overcome any embarrassment, Farley would ridicule himself before anyone else could. It was a way of making people laugh and bringing them onside, showing he was in on the joke, too.

After graduating from Marquette University in Milwaukee, Farley headed to Chicago where he joined the Second City, the comedy training ground of Dan Aykroyd, Martin Short, Gilda Radner and his idol Belushi, whom Farley had come to admire after seeing the actor in National Lampoon’s Animal House. It was at the Second City where he learned that big physical comedy drew big laughs.

“All the fat comics, they’re my favorites,” Farley said in 1997. “I watch them over and over again. The great comics can fall on their faces, but then they can say, ‘Oh, baby, you’re the greatest.’ They show their heart and their vulnerability.” 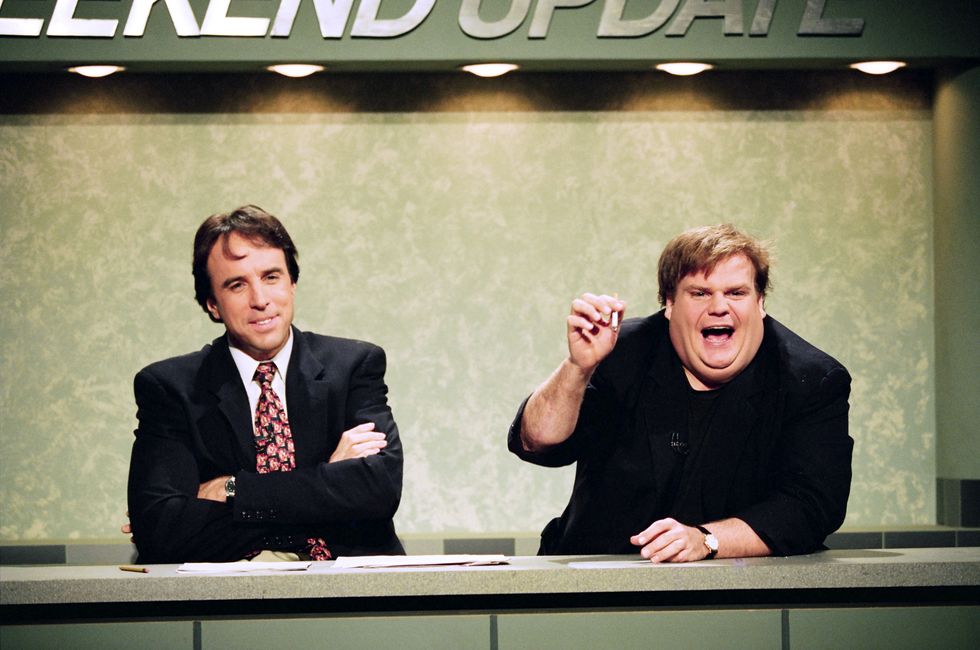 He would do anything for a laugh

Farley was touring with the Second City in 1989 when he was invited to audition for SNL. He later joined the cast as a junior member in 1990 alongside Adam Sandler, Rob Schneider, David Spade and Chris Rock, and remained there until 1995. Bursting with energy and willing to do anything for a laugh, he introduced audiences to popular characters such as motivational speaker Matt Foley, Cindy the Gap Girl, Todd O’Connor of Bill Swerski’s Superfans, the lunch lady and the hapless stripper auditioning for Chippendales alongside Patrick Swayze. His celebrity impressions included Meat Loaf, Tom Arnold, Carnie Wilson, Rush Limbaugh, Jerry Garcia and Mama Cass.

Hollywood movie success followed with Farley starring in Tommy Boy (1995), then Black Sheep (1996) and Beverly Hills Ninja (1997). It was during this period he was in and out of rehab at least 17 times. Though public adoration had increased, his self-loathing and destructive ways continued.

Farley said that he was 'terrified' of people, so he would act outrageously which included doing drugs

During a 1997 interview for Rolling Stone, Farley admitted he was always terrified. Terrified of people and crowds, he used his outrageous behavior to create a screen he could hide behind. He was scared his movies would bomb and he would never work again; that he would never be loved by a woman for who he really was; that if he lost weight he would no longer be funny. In 1996, Farley said he sometimes felt trapped “by always having to be the most outrageous guy in the room.”

When questioned about his cocaine and heroin use, Farley was circumspect. “Let’s just say I had my share of fun,” he said to Rolling Stone. “I worry about talking about this, because I worry about kids who might think, ‘Whoa, man, that’s cool!’ Because in some ways, that’s what I did with my hero, Belushi. I thought that this is what you have to do to be cool. But all that s*** does is kill someone. It’s a demon that must be snuffed out. It is the end.”

Farley was invited back to his SNL stomping ground as a host only once. The episode did not go well. He’d hurt his voice during rehearsals, resulting in him sounding hoarse for the live show. Media outlets took note of his apparent decline in health. The show’s cold open even featured Tim Meadows and Chevy Chase trying to convince Michaels that Farley was sober enough to host. Two months later, on October 25, 1997, his death would make international headlines.

Farley’s body was found in his Chicago apartment following a four-day drinking and drug binge during which the actor hopscotched through bars and fraternized with party girls, according to a 1998 report in Entertainment Weekly. Pushing almost 300 pounds, he was out of breath and sweating profusely. A call girl alleges she spent Farley’s final afternoon with him, saying he was smoking pot and drinking screwdrivers, though he appeared more interested in her scoring cocaine than her regular services. “I don’t think he knew what he wanted,” she said. “You could just tell he was on a rampage… He just kept bouncing from room to room.”

The Chicago police revealed Farley’s body was discovered by his younger brother, John, in the front room of the comedian’s apartment in the John Hancock Building located in the city’s downtown area. In the autopsy report, the Cook County medical examiner said traces of cocaine, morphine and marijuana were found in the actor’s blood. Advanced atherosclerosis (arterial plaque buildup) was cited as a “significant contributing factor.”

Farley’s funeral in his hometown of Madison drew 500 mourners along with fellow SNL alumni Rock, Sandler and show creator Lorne Michaels. His good friend Spade was noticeably absent, revealing the reason for his absence years later during a Reddit Ask Me Anything session. “I think about him all the time,” Spade wrote. "We had such a good time for so long and we were crammed together for so long that we did have our squabbles, but I think people misunderstood me not going to the funeral. It was nothing about that. It was just too… emotional and I wouldn’t be able to handle it.”

Following his death, Michaels told Rolling Stone that when Farley first arrived at SNL, “we used to say, ‘If John [Belushi] and Danny [Aykroyd] had had a child, it would have been Chris. He broke out. He knew how to get laughs, how to take hold of an audience and deliver everything. But there’s a warm and generous part of Chris Farley that is just as big a part of his talent. I think audiences could just see right through to him, right through to his heart.”