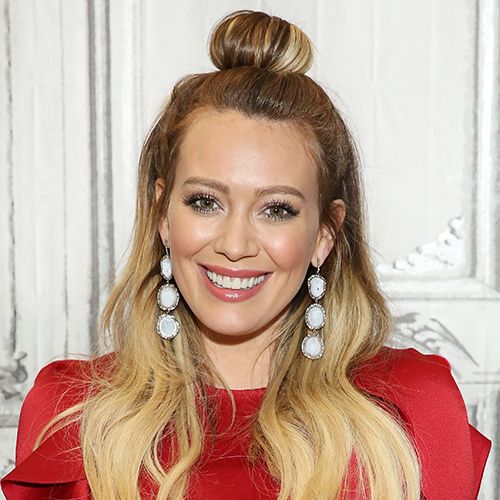 Who Is Hilary Duff?

Actress and singer Hilary Duff came to fame as the title character on the Disney Channel series Lizzie McGuire. Wildly popular with the tween set, Duff turned herself into a popular franchise with films like The Lizzie McGuire Movie (2003) and A Cinderella Story (2004). She also released several pop albums and her debut record, Metamorphosis (2003), went triple-platinum. Duff has has her own clothing lines: Stuff by Hilary Duff and Femme for DKNY Jeans. In 2015, she became part of the hit TV series Younger.

Hilary Erhard Duff was born on September 28, 1987, in Houston, Texas. She is the second of two daughters born to Susan, a housewife turned film and music producer, and Bob Duff, the owner of a chain of Texas convenience stores. Taking after her sister, Haylie, Duff entered ballet classes and auditioned for local theatrical productions with her sibling at a young age. "I always wanted to be like my older sister, Haylie," Duff later recalled. "When she learned to ride a bike, I had to as well. If she took ballet lessons, I did too. I took singing lessons because she did. It all just got more intense until it turned into careers for both of us."

At the age of six, Duff was cast alongside her sister in a BalletMet Columbus production of The Nutcracker Suite in San Antonio. It was a positive experience for both of the girls, who, in turn, aspired to act professionally. In 1993, they moved to California with their mother, who began managing their careers. Beginning at the age of eight, Duff was also home-schooled by her mother.

The budding actress got her first big break in Hollywood when she landed the lead role of Wendy, starring opposite an animated ghost in the 1998 made-for-TV movie Casper Meets Wendy.

In 2000, Duff was cast on a new sitcom, Daddio. She worked on the show alongside Michael Chiklis, who said after working with her for one day, "This young girl is going to be a movie star." Unfortunately, Chiklis' was not the only opinion that mattered. After just one episode — the pilot — Duff was dropped from the series by its producers. Depressed, Duff wanted to give up on show business, but her mother encouraged her not to give up her dream. The very next week, she landed the lead role on a new Disney Channel show entitled Lizzie McGuire.

Lizzie McGuire soon became a runaway hit, making Duff, performing as its title character, a household name. The young actress was especially popular with the tween set, though her fan base soon extended across all age ranges: "I don't think the Disney Channel gives us enough credit for the age range Lizzie McGuire actually has," Duff once said. "College students come up to me, grandparents, famous people." After starring in 65 episodes over two seasons, Duff reprised the role of McGuire for 2003's The Lizzie McGuire Movie. The film was incredibly successful, grossing more than $55 million worldwide.

Duff's success with Lizzie McGuire led her to work in other facets with Disney, including starring in the 2002 Disney Channel movie Cadet Kelly and releasing an album, Santa Claus Lane, for the company's music label. In 2003, Duff and Disney entered negotiations for an extension to the Lizzie McGuire franchise, but talks broke down over pay disputes, and the show came to an end the following year.

In August 2019, it was announced that Duff would return to headline a reboot of Lizzie McGuire for the new Disney+ streaming service. The updated version will feature Lizzie in her 30s, juggling the demands of work and relationships, with old friends and her animated 13-year-old alter ego also set to appear.

The year 2003 was a busy one for Duff, as the 16-year-old starred in three movies — Agent Cody Banks, The Lizzie McGuire Movie and Cheaper by the Dozen — and released her first non-Disney studio album, Metamorphosis. Featuring songs written by both Duff and her sister, the album eventually went triple-platinum in the United States. By now, Duff had developed a reputation as a teen idol and drew comparisons to the late Annette Funicello, who had risen to prominence as the star of The Mickey Mouse Club half a century before.

In 2004, Duff starred in two films: A Cinderella Story, which was moderately successful at the box office and Raise Your Voice, which bombed. That same year, the starlet released her second album, the eponymous Hilary Duff, which earned platinum certification, and launched her own fashion line, Stuff by Hilary Duff, which saw mass distribution through Target and K-Mart. (She would later launch the fashion line Femme for DKNY Jeans.) Also in 2004, Duff began dating Good Charlotte frontman Joel Madden; their relationship would end in November 2006.

By 2005, Duff, desperately wanting to move away from tween fare so that she could be taken seriously as an adult actress, was attempting to reshape her public image. She starred in The Perfect Man with Heather Locklear in 2005, and in Material Girls with sister Haylie in 2006, but both films bombed with movie audiences.

Duff's fourth studio album, Dignity, was released in 2007 to both critical and commercial acclaim, praised for offering a more mature, adult sound than that of its predecessors. Working with American singer-songwriter Kara DioGuardi, Duff co-wrote all but one song on the album.

Duff was then offered the lead role in the 2008 reboot of the 90210 TV franchise, but passed on the part, preferring to make a definitive move from her high school image. She went on to appear in the political satire War, Inc. (2008) alongside John Cusack.

Continuing her efforts to bolster her image as a serious actress, Duff has appeared in several independent films in recent years. In 2009, she starred in the indie drama According to Greta with Melissa Leo and Ellen Burstyn, and in the comedic drama Stay Cool with Winona Ryder, Jon Cryer and Chevy Chase. Duff was then cast alongside Val Kilmer and Kris Kristofferson in 2010's Bloodworth, and was later featured in the 2012 comedy She Wants Me, along with Josh Gad and Charlie Sheen.

Duff has also continued to appear on the small screen, playing Lane Daniels in the 2010 TV movie Beauty & the Briefcase and guest-starring on a number of series, including Gossip Girl, Community, Raising Hope and Two and a Half Men.

Staring in 2015, Duff signed on to play the role of Kelsey Peters in the TV series Younger, opposite Sutton Foster. The success of the first season has led to the show's longevity and marks Duff's first major role on television since she was a tween actress on Lizzie McGuire.

'Breathe In. Breathe Out.'

Duff released her fifth studio album, Breathe In. Breathe Out., in the spring of 2015 with its accompanying singles "Chasing the Sun," "All About You" and "Sparks."

'The Haunting of Sharon Tate'

Indicating that she had indeed moved well beyond the Disney princess image, Duff in early 2018 revealed that she would be starring in a film as Sharon Tate, the actress killed by followers of Charles Manson in 1969. The announcement didn't sit well with Tate's sister Debra, who criticized the idea of making a movie about the Manson murders as "classless" and "exploitative." The Haunting of Sharon Tate drew mostly negative reviews, though it also picked up a few wins at the 2019 Hollywood Reel Independent Film Festival.

Outside of her performance career, Duff is heavily involved with charities, especially those focusing on the rights of animals and children. In 2005, she donated $250,000 to help victims of Hurricane Katrina and encouraged her fans to donate as well.

As she looks toward the future, Duff remains very aware of the unusual opportunities that allowed her to achieve a great amount of success at a young age, saying, "I wonder what life would have been like to have a different life. I sometimes wish I wasn't always watched or didn't have to worry about been seen somewhere. But I've experienced things other girls haven't. I've traveled, I'm financially independent, I own a beautiful home and I'm happy with my job. I don't have to struggle with the questions a lot of other women do."

Duff also looks forward to challenges and opportunities for growth, both in her career and personal life. "I want to grow as a person, and I want to make mistakes," she has stated. "I'm human, too. So I think I've gotten to a place where I'm really being myself."

On August 14, 2010, Duff married her longtime boyfriend, Mike Comrie, a professional hockey player for the Pittsburgh Penguins of the National Hockey League.

On March 20, 2012, Duff gave birth to the couple's first child, son Luca Cruz Comrie. In a 2013 interview with the Today show, Duff stated that she was "obsessed" with being a mom. "It's very humbling. It's all about him. ... It's his world. We're just living in it," she said. "I feel like my heart just swelled. I didn't know I could love something so much. And that keeps getting more intense as he grows older."

After Duff and Comrie divorced in 2016, the actress welcomed daughter Banks Violet Bair with her boyfriend, musician Matthew Koma, in June 2018. The couple got engaged in May 2019 and tied the knot that December.

In March 2021, Duff and Koma welcomed their second child together, daughter Mae James.