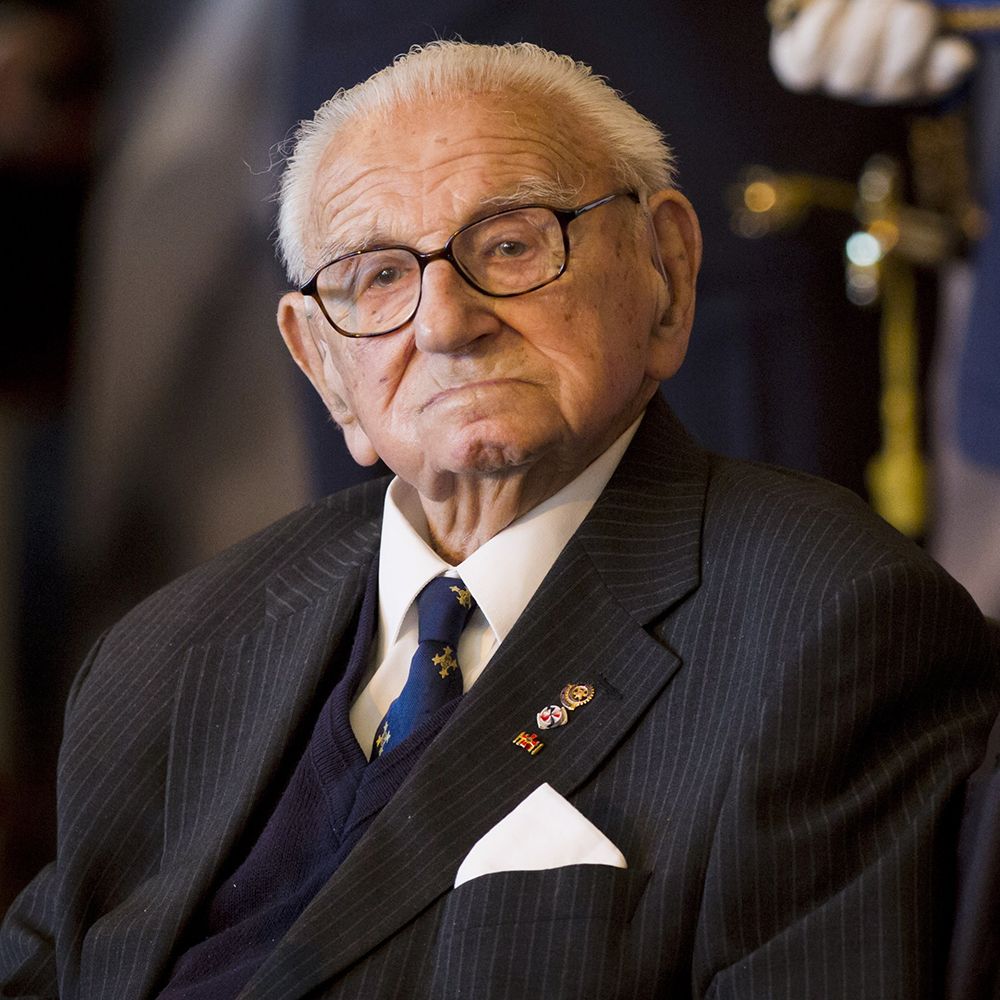 Who Was Sir Nicholas Winton?

Sir Nicholas Winton was a 29-year-old stockbroker who in 1939 organized trains out of Prague to secure the safe passage of 669 Jewish children from Czechoslovakia to England at the dawn of World War II. The evacuees, later known as "Winton's Children," knew little about their rescuer until the 1980s, when his work finally came to light. He was knighted in 2003 and died on July 1, 2015, at the age of 106.

Nicholas George Wertheim was born in London, England, on May 19, 1909. He was the oldest of three children whose parents, Rudolf and Barbara Wertheimer, were German Jews who later converted to Christianity and changed their last name to Winton.

Nicholas grew up with considerable means. His father was a successful banker who housed his family in a 20-room mansion in West Hampstead, London. After attending Stowe School in Buckingham, Winton followed in his father's footsteps and apprenticed in international banking. Afterward, he worked in banks in London, Berlin and Paris. In 1931 he returned to England and began his career as a stockbroker.

In December 1938, Winton skipped a planned Swiss ski vacation to visit a friend who was working with refugees in the western area of Czechoslovakia known as the Sudetenland, which had fallen under German control. It was during this visit that Winton witnessed firsthand the dire situation of the country's refugee camps, which were overfilled with Jewish families and other political prisoners.

Appalled by what he saw, and aware that an effort was underway to organize a mass evacuation of Jewish children from Austria and Germany to England, Winton moved quickly to replicate a similar rescue effort in Czechoslovakia. Working initially without the group's authorization, he used the name of the British Committee for Refugees and began taking applications from Czech parents at a Prague hotel. Thousands soon lined up outside his office.

Winton then returned to England to pull the operation together. He found adoptive parents, secured entry permits and raised the funds to cover the costs of the children's transit. Whatever costs these donations didn't cover, Winton paid for out of his own pocket.

On March 14, 1939, just hours before Adolf Hitler and the German Nazis took Czechoslovakia, the first train carrying Winton's rescued children left the country. Over the course of the next five months, Winton and the small team he had assembled organized seven other successful evacuation trains. In all, 669 children made it to safety.

However, a ninth train, which was set to leave on September 1, 1939, and carried another 250 children, never departed. On that very same day, Hitler invaded Poland and closed off all borders under German control, igniting World War II and bringing Winton's rescue work came to an end.

The Humble Man & His Legacy

For half a century, Winton largely kept quiet about the work he'd done and the lives he'd saved during the early days of the war. Not even his longtime wife, Grete Gjelstrup, whom he'd married in 1948 and had three children with, knew anything about it.

DID YOU KNOW? With his younger brother, Bobby, Sir Nicholas Winton created the Winton Cup, a premier British fencing competition.

It wasn't until 1988, when Gjelstrup stumbled across an old scrapbook stuffed with letters, pictures and travel documents, that her husband's efforts came to light again. Despite Winton's initial reluctance to discuss his rescue operation, Gjelstrup, with his consent, turned the scrapbook over to a Holocaust historian.

Soon others came to know Winton's story. A newspaper article was written about him, followed by a BBC special. Winton was praised around the globe, and letters of appreciation came in from major heads of state. Hailed as Britain's Oskar Schindler, the German businessman who saved some 1,200 Jews during the Holocaust, Winton received an American Congressional resolution as well as honorary citizenship of Prague, the Czech Republic's highest honor. Streets were named after him, and statues were erected in his honor. In 2003, Queen Elizabeth II knighted him and in 2010 he received a Hero of the Holocaust medal. In addition, several films were made about Winton and his work to save the kids who came to be known as Winton's Children.

While a reluctant recipient of his global celebrity, Winton did welcome the chance to meet with many of those he had saved. Several different reunions were organized, most notably on September 1, 2009, when a special train marking the rescues left Prague for London carrying a number of the original evacuees. As he had seven decades before, the 100-year-old Winton greeted the travelers as they came into London.

Over the course of many interviews, Winton was asked why he did what he did. His answers were always framed by his typically humble manner.

"One saw the problem there, that a lot of these children were in danger, and you had to get them to what was called a safe haven, and there was no organization to do that," he told The New York Times in 2001."Why did I do it? Why do people do different things. Some people revel in taking risks, and some go through life taking no risks at all."