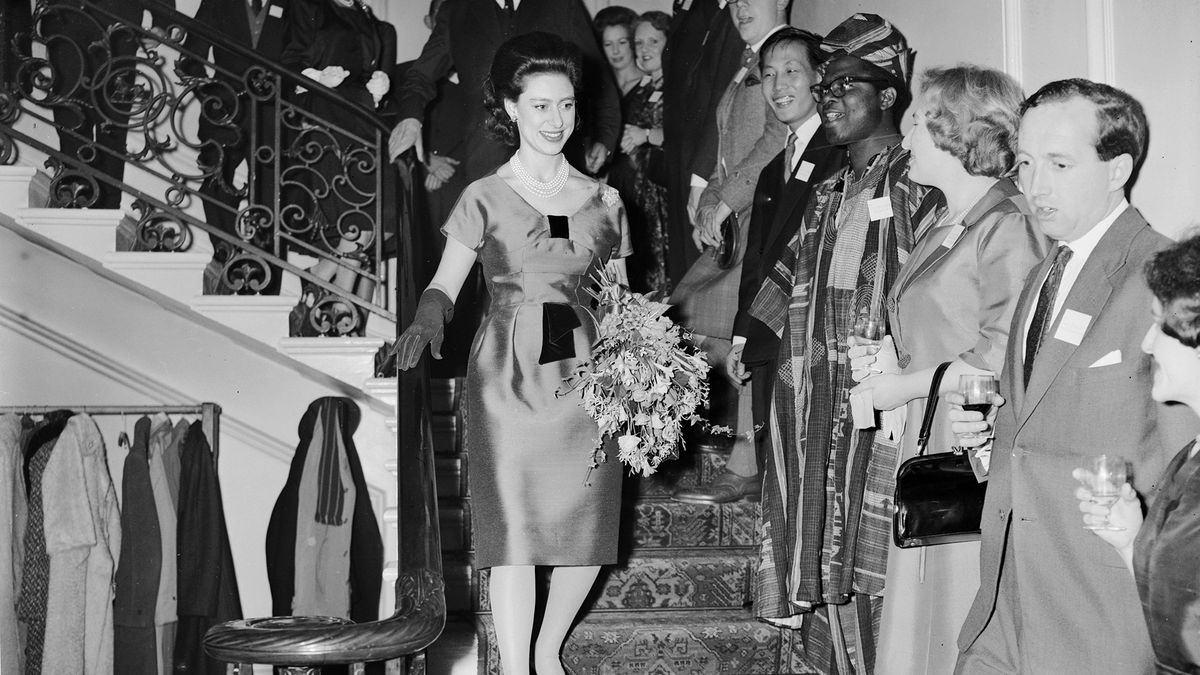 It was a delightful sight. Her Royal Highness Princess Margaret, the Countess of Snowdon, the younger sister of Queen Elizabeth II of England, singing a Cole Porter medley at a party in Kensington Palace with one of her many unlikely friends – John Phillips of The Mamas and the Papas. Margaret adored singing (often off-key, wrote author Caroline Blackwood), playing piano, dancing, gossiping and guzzling Famous Grouse scotch. According to biographer Craig Brown, she chained smoked from morning till night, sometimes gluing “matchboxes onto tumblers so that she could strike matches while drinking.”

Yes, the beautiful, pocket-sized Princess (standing only five-feet-tall) loved to party – but on her own particular terms. Over the decades of her turbulent life, Margaret would go from belle of the ball to persona non grata, her bossy, difficult snappishness making even the most accomplished society hostess quake in her heels. “I have been at the same house parties as her and her arrogance, her petulance, her rudeness and her plain bad manners were awful,” one frenemy recalled.

Even as a child, Margaret was a royal rebel

From the time she was a young girl, Margaret both compelled and repelled her fellow party guests. In 1943, publisher Mark Bonham Carter, dancing with the 13-year-old Princess at a ball at Windsor Castle, found her "full of character and very tart in her criticisms."

During her teens and early twenties, the high-spirited, “rebel princess” was revered as a modern, mischievous royal unwilling to play the game. “Interesting to watch her face,” historian A.L Rowse wrote after studying her at a 1956 garden party at Buckingham Palace. “A bored, mécontente, ready to burst out against it all: A Duke of Windsor among the women of the Royal Family.”

Dinner could not start until Margaret arrived

Always clever, Margaret discovered perhaps her best party trick early on. She used royal protocol and its rules to suit her whims and desires. At a party given in her honor in Paris in 1959, she took advantage of the long-standing rule that dinner could not begin until she arrived.

“Dinner was at 8:30 and at 8:30 Princess Margaret’s hairdresser arrived, so we waited for hours while he concocted a ghastly coiffure,” writer and aristocrat Nancy Mitford recalled. “She looked like a huge ball of fur on two well-developed legs.” The next day her bad behavior continued when she begged off a planned excursion, claiming a cold, only to spend the day in fittings with the House of Dior.

The princess insisted on being called ma'am

Margaret’s behavior not only exasperated the stuffier set but the glittering, hard-partying bohemian and entertainment circles she and her husband Antony Armstrong-Jones gravitated towards.

Insisting on being called ma’am, she would lure people in with her charm, only to play the grande dame the moment they got too close. “We got on terribly well, very chummy, talking about her mum and her sister, and she really made me feel like I was a friend,” the actor Derek Jacobi recalled of one long dinner party. “Until she got a cigarette out and I picked up a lighter and she snatched it out of my hand… 'You don’t light my cigarette, dear. Oh no, you’re not that close.’”

At one particularly fraught house party, the Princess was annoyed when treated like one of the gang.

"We were playing Trivial Pursuit," a fellow guest recalled, "and the question was the name of a curried soup. She said, 'It’s just called curried soup. There isn’t any other name for it. It’s curried soup!’ Our host said, 'No, Ma’am – the answer is Mulligatawny.' And she said, ‘No, it’s curried soup!’ And she got so furious that she tossed the whole board in the air, sending all the pieces flying everywhere.” 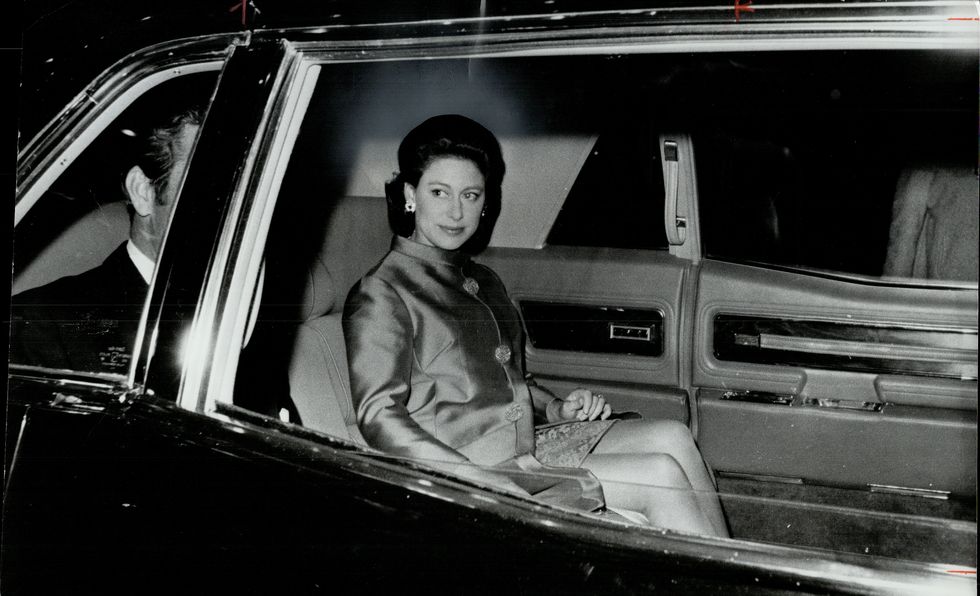 The famous, beautiful and truly talented were often the target of Margaret’s wrath. She had a perverse love of telling artists she disliked them and their work. Greeting producer Robert Evans at a gala in London she made sure to tell him that her husband had hated his hit movie Love Story. She also hated opera, Sondheim and Boy George, and made her dislike abundantly known.

Upon meeting the former Hollywood actress Princess of Monaco Grace Kelly, she sniped, “Well, you don’t look like a movie star.” During the swinging ‘60s, she ignored supermodel Twiggy at a dinner party, finally asking her name. “Lesley, Ma’am. But my friends call me Twiggy.”

“How unfortunate,” the Princess said, before turning away.

The uppity Princess occasionally met her match. During an official visit to Hollywood in the 1960s, Margaret went too far when she ordered Judy Garland to sing. According to Theo Aronson’s Princess Margaret: A Biography:

At a party at the Beverly Hills Hotel, Her Royal Highness sent a message across the room to say that she would like to hear Miss Garland sing. The singer was appalled, both by this trivializing of her talent and by the Princess’s lordly tone. "Go and tell that nasty, rude little princess that we’ve known each other for long enough and gabbed in enough ladies’ rooms that she should skip the ho-hum royal routine and just pop over here and ask me herself," said Garland. "Tell her I’ll sing if she christens a ship first."

Margaret also met her match in the iconic Elizabeth Taylor, who seemed to have been amused by Margaret’s continued slights.

“After Richard Burton presented Taylor with the huge Krupp Diamond, Princess Margaret remarked to a friend that it was ‘the most vulgar thing I’ve ever seen,’” Brown writes in Ninety-Nine Glimpses of Princess Margaret. “Taylor heard of this slight. A while later, the two women met at a party. Taylor was wearing the diamond and asked Margaret if she would like to try it on. Margaret slipped it on her finger. ‘Doesn’t look so vulgar now, does it?’ observed Taylor.”

At the end of one particularly tense party in London in the early 1980s, which included an embarrassing episode where the Princess recited the lines from Taylor’s current play, she finally looked at the good-natured movie star dismissively and said, “Is anyone going to take her home – or we’ll have to find a sleeping bag?!”

This was quite a statement for a woman legendary for overstaying her welcome. The critic Brian Sewell described a stay with her at a friend’s house in the country, where she took advantage of the protocol that no one could retire before Her Royal Highness:

The Princess arrived an hour before midnight for a ruined dinner scheduled for eight; by then the servants from the village had gone home to bed and the rest of us, some half-dozen, absolutely plastered, had to buckle-to, and carry and carve the baked meats of sacrifice; she then kept us up until four in the morning, kippering us with her cigarettes. Long after the crack of dawn, with not a sniff of coffee nor sign of a servant in the kitchen to clear the mess from the night, I wandered into the village, called a friend and arranged a late morning death-and-doomsday telephone message requiring my immediate return home.

Margaret constantly kept her exhausted hosts on edge. She was legendarily picky – she only drank bottled Malvern water and openly disparaged her hosts’ carefully prepared dishes. As Brown notes, she seemed to delight in making her superiority evident at all times. “We were going to drive from Royal Lodge to the Castle,” journalist Selina Hastings recalled. “She was wearing some peep-toe sandals and as she got into the car she said, ‘Selina, I’ve got some chewing gum on my shoe!’ So, I had to get out and go round to the other side and pull the chewing gum off.”

Nowhere was the Princess more catered to than the private island of Mustique, owned by her great friend Colin Tennant. From the 1970s until her death, Mustique was her private party fiefdom. Tennant even supplied bowls of fresh water to wash the sand off her feet after her daily swim. “He collapsed with exhaustion when Princess Margaret left the island,’ the actor Nicholas Courtney told Brown. “He put every ounce of energy into making it fun for her.”

Even her loving and understanding sister found Margaret an exacting and maddening guest. After scalding her feet in Mustique in 1999, the princess often used a wheelchair, though her sister thought it unnecessary. During a visit to Buckingham Palace, Elizabeth had only supplied a wheelchair for the nonagenarian Queen Mother, much to Margaret’s dismay. “The Queen had seen to it that a footman would have a wheelchair ready for her mother,” Brown writes, “but as the lift doors opened onto the first floor, Margaret made a dash for it. ‘For God’s sake, Margaret – get out! That’s meant for Mummy!’”

By the end of her life, Margaret was considered so unpleasant that officials at Sotheby’s were literally bribing fellow guests to chat with her for five minutes. But to her loyal friends, the princess’ bad party manners were often presented with a campy wink, and seen as a misguided effort to both amuse, connect and get the attention she so desperately craved.

“The connoisseurs wanted to see her getting uppity; it was what she did best,” Brown writes. “If you were in search of an amusing tale, you’d opt for the immersive Margaret experience: a late night and a show of stroppiness, all ready to jot down in your diary the moment she left, her high-handedness transformed, as if by magic, into anecdote. Hoity-toity is what was wanted. For most recipients, hosts, and guests, once she had finally gone and the dust had settled, they were left with a suitably outrageous story.”