It was perhaps one of the most heart-breaking moments to watch in royal history: 15-year-old Prince William and 12-year-old Prince Harry walking behind their mother’s coffin from London’s St. James’s Place to Westminster Cathedral on September 6, 1997.

Sitting on top of the coffin was a card simply reading: “Mummy.”

A million people lined the streets from Kensington Palace to the church—and estimates of up to 2.5 billion watched live on television—to honor the memory of Princess Diana, who had tragically died in a car accident in Paris on August 31, 1997. 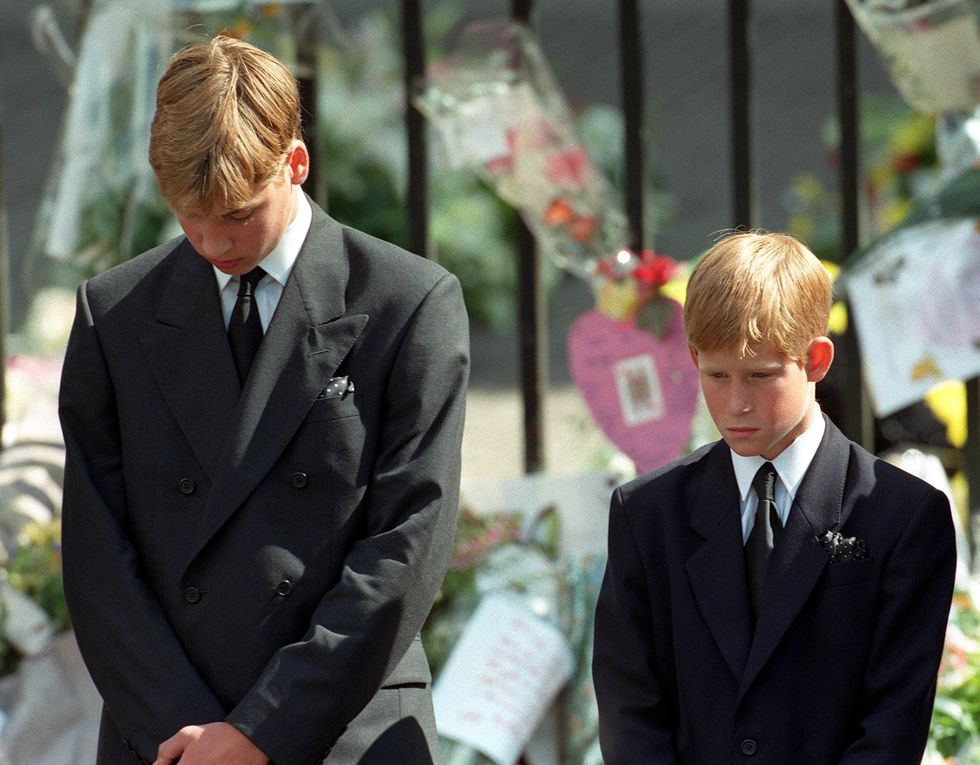 Princes William and Harry during their mother’s funeral on September 6, 1997.
Getty Images

“It was one of the hardest things I have ever done,” Prince William told GQin 1997, just before the 20th anniversary of her passing. “But if I had been in floods of tears the entire way round how would that have looked? In the situation I was in, it was self-preservation. I didn't feel comfortable anyway, having that massive outpouring of emotion around me.”

Just weeks shy of his 13th birthday, Prince Harry shared a similar approach. “My way of dealing with it was sticking my head in the sand, refusing to ever think about my mum,” he said in a Telegraph podcast in 2017. “So from an emotional side I was like, don’t let your emotions be part of everything.”

While both young men put aside their emotions, the pain of the sudden loss of their mother brought them together and built a foundation for them to carry forth and honor her legacy.

Diana became known as the People’s Princess in part because of her tireless commitment to helping others and also using the media’s attention on her to shine a light on charitable causes. And she didn’t just talk the talk, Diana always went the distance to prove her heartfelt connections with the organizations.

She was photographed wearing body armor during a visit to a landmine field in Angola for the mine-removal charity Halo Trust. She was seen hugging orphaned toddlers who were HIV positive or suffering from AIDS in Brazil. She was spotted holding the hand of a leprosy patient in Indonesia.

And she often took her sons with her on the visits. She once brought William and Harry to Centrepoint, a London charity which she had worked with since 1992, that helps homeless youth prepare for a life off the streets. And in 2005, William became a patron for the organization. “My mother introduced that sort of area to me a long time ago,” he said at the time. “It was a real eye-opener and I am very glad she did. It has been something I have held close to me for a long time.”

Prince Harry visits Mozambique in June 2010 with The Halo Trust, the same mine-removal non-profit that Princess Diana once visited with in Angola.
Handout//Getty Images

Harry has also followed her lead in various areas, having worked with both the Halo Trust and for organizations committed to putting an end to HIV and AIDS. He live-streamed his own AIDS test in 2016. “It is time for a new generation of leaders to step forward,” he said at an AIDS conference that year. “It is time for us to step up to make sure no young person feels any shame in asking for an HIV test.”

Perhaps the area they’ve emphasized most, in part because of Diana, is mental health. During a 1995 interview with the BBC, she talked about self-harm and depression: “When no one listens to you, or you feel no one’s listening to you, all sorts of things start to happen. For instance, you have so much pain inside yourself that you try and hurt yourself on the outside because you want help, but it’s the wrong help you’re asking for.”

Even though William said in the 2017 GQ story that he doesn’t believe his mother had mental health problems, he’s still put it at the forefront of his charitable efforts and—in an unprecedented move—has joined forced with both Prince Harry and his wife, Princess Kate Middleton, to make a serious impact in the mental health space with their joint organization Heads Together.

“The Royal Family has not normally done this, three members of the family pulling together to focus on one thing. Normally things are quite disjointed, we follow our own interests and see where it goes, but we thought, well, if we tied it together and had a focused approach, how would that work? We wanted to see the impact we could have,” Prince William said in the GQ piece.

“Practically everything in my charitable life, in the end, is to do with mental health, whether it be homelessness, veterans' welfare, my wife and the work she is doing on addiction; so much of what we do comes back to mental health,” he continued. “Harry has the Invictus Games and focuses a lot on veterans. But we are not stuck in our boxes. We are all three of us trying to understand the tentacles of mental health, which go everywhere.”

As the royals continued to work together, they understand the unique position they’re in, thanks to Princess Diana. “What my mother believed in is...the fact that you are in a position of privilege or a position of responsibility and if you can put your name to something that you genuinely believe in...then you can smash any stigma you want,” Prince Harry said in the Telegraph podcast.

While the British brothers have shown the charitable hearts they inherited from their mother, they’ve also kept her memory alive in others ways too, such as honoring her fun-loving side. In 2007, they organized a Concert for Diana to raise money for the organizations she supported.

“This evening is about all that our mother loved in life: her music, her dance, her charities and her family and friends,” William said on stage in Wembley Stadium. Performing at the show was a diverse roster, including Elton John, Andrea Bocelli, Tom Jones, Rod Stewart, Kanye West, Sean “Diddy” Combs, Donny Osmond, Duran Duran, Ricky Gervais, Fergie, Pharell, Joss Stone and Josh Groban. 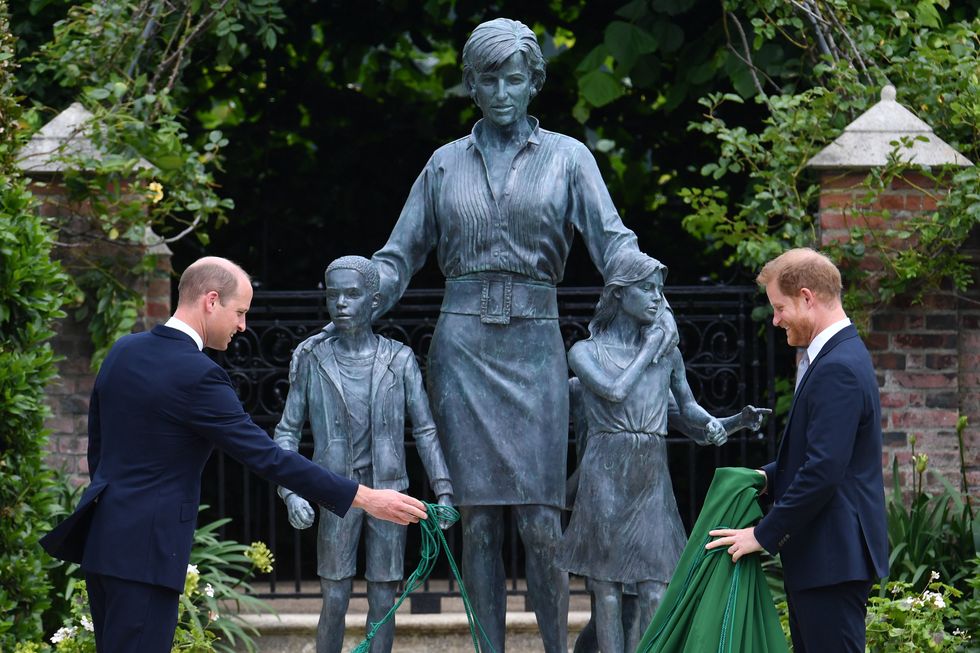 In July 2021, Prince William and Prince Harry unveiled a statue of their mother on what would have been Diana’s 60th birthday.
WPA Pool//Getty Images

In another nod to their late mother, Prince William’s daughter’s full name is Princess Charlotte Elizabeth Diana, merging both his grandmother and mother’s names.

But perhaps the most meaningful way the duo keep Princess Diana’s legacy strong is a routine that’s kept to just the two of them. Every year on the anniversary of her August 31 death, the brothers try to meet up and reminisce.

“They talk about the little things about Diana that made them laugh: the ski trips and outings to [the theme park] Thorpe Park, the effort she went to on their birthdays — all of it,” a royal insider told Us Weekly. And later on, their significant others and kids join them.

“I find talking about my mother and keeping her memory alive very important,” William told GQ. “I find it therapeutic to talk about her, and to talk about how I feel. One thing I can always say about my mother is she smothered Harry and me in love. Twenty years on I still feel the love she gave us and that is testament to her massive heart and her amazing ability to be a great mother.”