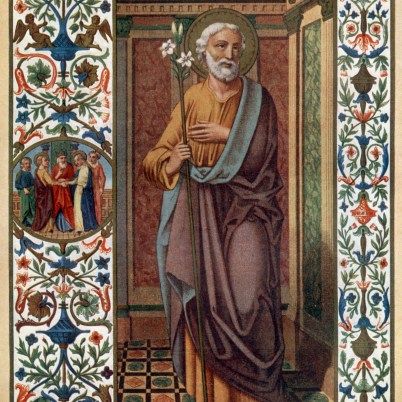 Who Was Saint Joseph?

Venerated as a saint in many Christian sects, Saint Joseph is a biblical figure who is believed to have been the corporeal father of Jesus Christ. Joseph first appears in the Bible in the gospels of Matthew and Luke; in Matthew, Joseph's lineage is traced back to King David. According to the Bible, Joseph was born circa 100 B.C.E. and later wed the Virgin Mary, Jesus's mother. He died in Israel circa 1 A.D.

Everything we know about Saint Joseph, the husband of Mary and the foster father of Jesus, comes from the Bible, and mentions of him are underwhelming. The 13 New Testament books written by Paul (the epistles) make no reference to him at all, nor does the Gospel of Mark, the first of the Gospels. Joseph first appears in the Bible in the gospels of Matthew and Luke, one of which (Matthew) traces Joseph's lineage back to King David.

To add to the problem of not knowing enough about Joseph, some apocryphal writings — such as the second-century Protevangelium of James and the fourth-century History of Joseph the Carpenter — muddy the historical waters further, presenting him as a widower with children when he met Mary and claiming that he lived to the age of 111. These claims, however, are spurious and are not accepted by the church.

After marrying Mary, Joseph found that she was already pregnant, and being "a just man and unwilling to put her to shame" (Matt. 1:19), he decided to divorce her quietly, knowing that if he did so publicly, she could be stoned to death. An angel, however, came to Joseph and told him that the child Mary carried was the son of God and was conceived by the Holy Spirit, so Joseph kept Mary as his wife.

After Jesus' birth in Bethlehem, an angel came to Joseph again, this time to warn him and Mary about King Herod of Judaea and the violence he would bring down upon the child. Joseph then fled to Egypt with Mary and Jesus, and the angel appeared again, telling Joseph that Herod had died and instructing him to return to the Holy Land.

Avoiding Bethlehem and possible actions by Herod's successor, Joseph, Mary and Jesus settled in Nazareth, in Galilee. The Gospels describe Joseph as a "tekton," which traditionally has meant "carpenter," and it is assumed that Joseph taught his craft to Jesus in Nazareth. At this point, however, Joseph is never mentioned again by name in the Bible—although the story of Jesus in the temple includes a reference to "both his parents."

The circumstances of Joseph's death are not known, but it is likely that he died before Jesus's ministry began, and it is implied that he was dead before the Crucifixion (John 19:26-27). Already a patron saint of Mexico, Canada and Belgium, in 1870, Joseph was declared patron of the universal church by Pope Pius IX, and in 1955 Pope Pius XII established May 1 as the "Feast of Saint Joseph the Worker" to counter the Communists' May Day.