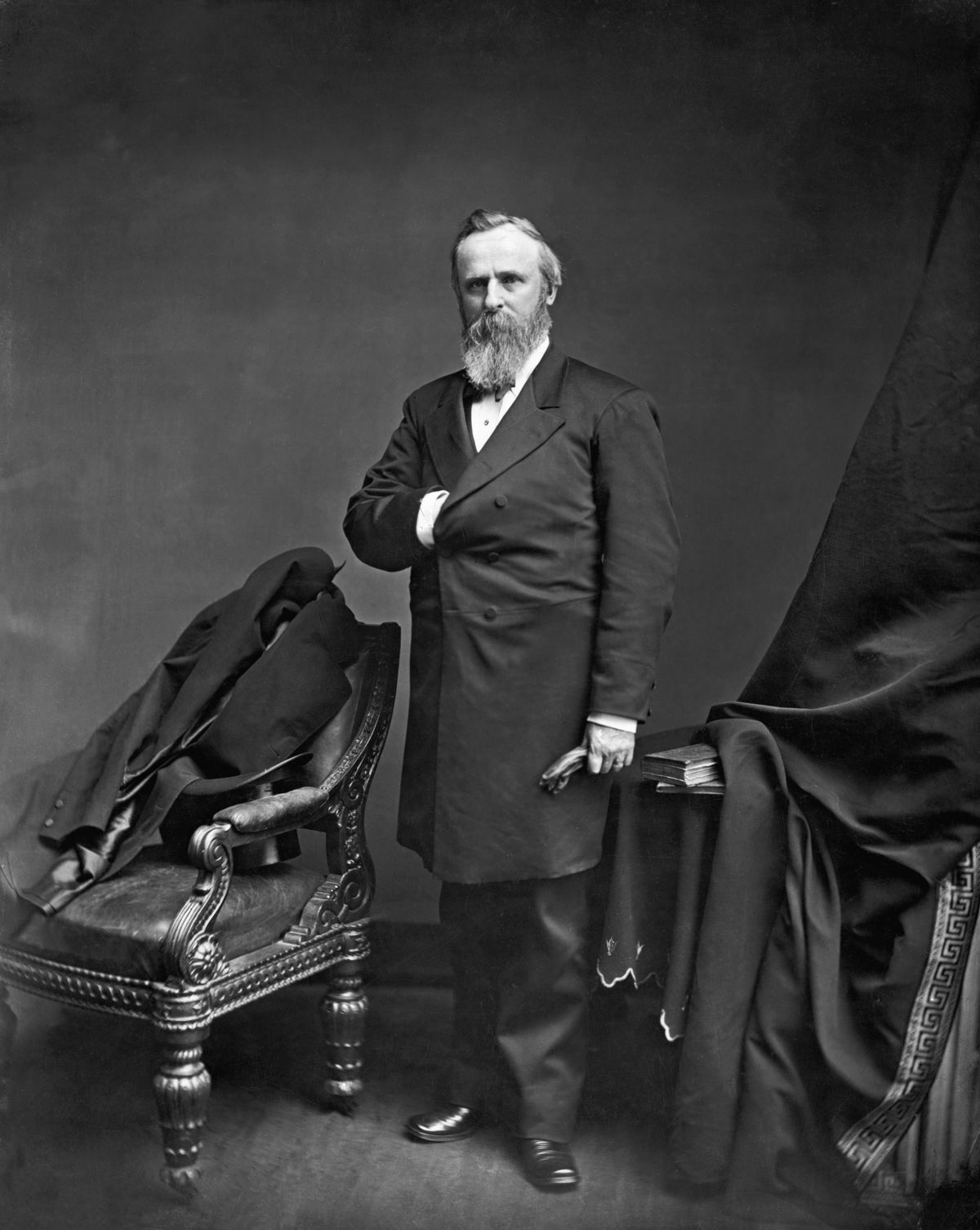 Who Was Rutherford B. Hayes?

Born on October 4, 1822, in Ohio, Rutherford B. Hayes was the 19th president of the United States. Before becoming president, he served in distinguished legal, military and congressional posts, and was governor of Ohio. After winning the presidency in one of the most contested elections in American history, he led the country through the end of Reconstruction and resigned after one term in office.

Hayes was born on October 4, 1822, in Delaware, Ohio. His family had moved to Ohio five years previously, and his father had died about two months before Hayes’ birth. Hayes and his sister, Fanny, were raised by their mother, and Hayes attended various schools until graduating from Kenyon College in 1842 as his class’ valedictorian. Three years later he emerged with a law degree from Harvard Law School and began practicing law in Lower Sandusky, Ohio. Four years later, in 1849, Hayes picked up and moved to the more bustling Cincinnati, where his law practice flourished and where he was first drawn to the Republican Party. (Hayes’ antislavery sentiments found a kinship in the Republicans.)

In 1852, Hayes married Lucy Webb, a graduate of Cincinnati's Wesleyan Women's College. (She would later become the first president’s wife who had graduated from college.)

Hayes fought in the Army during the Civil War, rising to the rank of major general and sustaining severe injuries at the Battle of South Mountain. While Hayes was still in the Army, Republicans from Cincinnati convinced him to run for the House of Representatives, and he was easily elected, entering Congress in December 1865. Two years later, he had resigned and begun his first term as governor of Ohio, going on to serve three terms.

In 1876, the Republicans put Hayes up to run for president against Democrat Samuel Tilden of New York. Despite such widely known figures as Mark Twain campaigning on his behalf, Hayes never thought he could win, and when the popular vote came in, Hayes had lost by a narrow 250,000-vote margin. However, contested electoral-college votes in Florida, Louisiana and South Carolina kept the candidate afloat: If all of the disputed votes went to Hayes, he would win; if even a single vote went to Tilden, Hayes was finished.

In what would end up being one of the most controversial elections in American history, uncertainty reigned for months after the election, until January 1877, when Congress established an ad hoc electoral commission to decide the dispute once and for all. The commission was composed of eight Republicans and seven Democrats, so it was no surprise that it decided in favor of Hayes by an 8-7 vote, handing the final electoral tally to Hayes by a 185-184 count.

As part of the Compromise of 1877, which allegedly was behind Hayes’ victory at the hands of the election commission, Southern Democrats were promised, in part, at least one Cabinet post (the postmaster general spot was given to a Democrat) and withdrawal of federal troops from Louisiana and South Carolina, which effectively ended the Reconstruction era and returned the South to home rule.

This was a blow to any equal-rights strides made since the Civil War, but Hayes subsequently spent a good deal of effort fighting on behalf of civil-rights laws aimed at protecting Black Americans. Unfortunately, the House of Representatives was Democrat-controlled, and they blocked each of Hayes’ moves toward establishing civil rights, at the voting booth and beyond.

Hayes next turned his attention toward revamping the civil-service process, which had awarded political loyalty in its appointments instead of merit. While he fought the good fight on the issue, results would not be seen until years later, when changes Hayes had proposed were implemented (via the Pendleton Act, which mandated the civil service exam) under the presidency of Chester A. Arthur.

Another thorn in Hayes’ side was the great Railroad Strike of 1877, which found railroad workers across the country walking off the job to protest a pay cut. Hayes deployed federal troops to quell ensuing riots, and in the end the workers returned to their posts with the pay cuts still in force—a victory for the railroads.

Inside the White House, a distinguishing feature emerged from first lady Lucy Hayes: an alcohol-free policy. To the joy of the Woman's Christian Temperance Union (whose goal was to create a “sober and pure world”), the first couple banned wines and liquors from the White House, which later convinced prohibitionists to vote Republican.

Adhering to his pledge of serving only one presidential term, Hayes retired to Fremont, Ohio, in 1881. He dedicated his life thereafter to advocacy efforts on behalf of such causes as children’s literacy, prison reform, and the gap between rich and poor Americans.

Hayes and his wife Lucy were the parents of eight children. He died in 1893, four years after his wife.