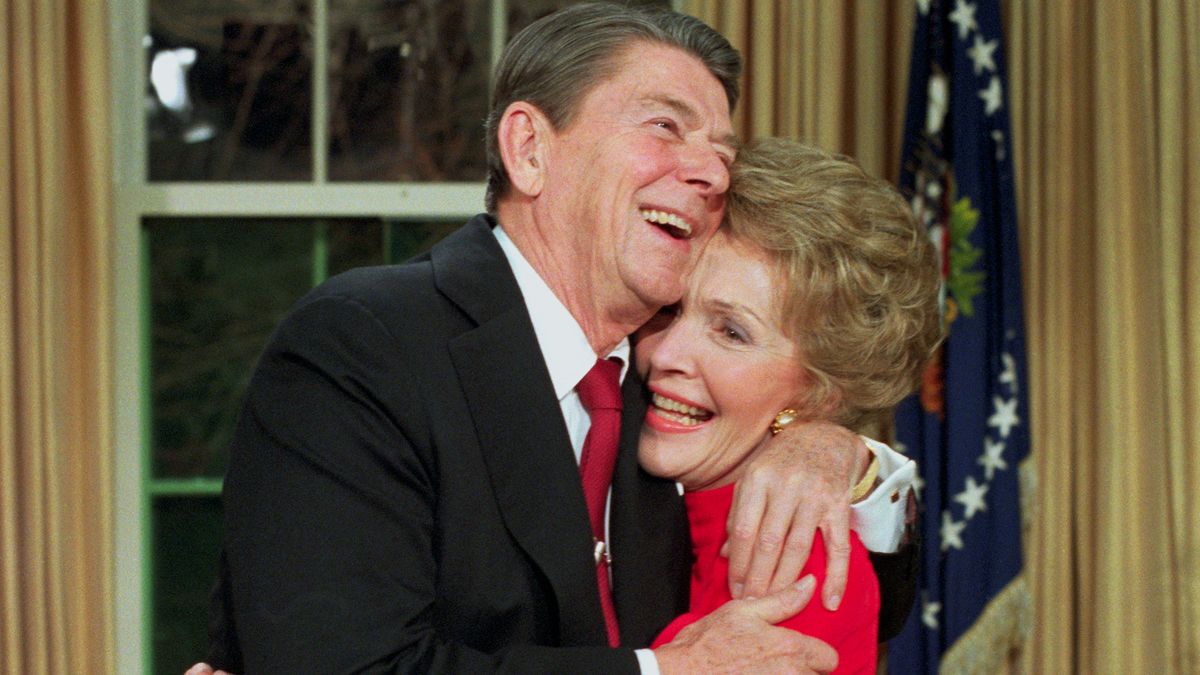 Their love would endure beyond the marquee lights and names of old Hollywood, strengthening across decades of public service that would culminate in a two-term tenure in the White House. As a couple, Ronald Reagan and Nancy Reagan would become the epitome of political glamour and private perseverance, their deep and abiding love enduring his presidential turmoil and her anguish of caring for a partner stricken with Alzheimer’s disease.

Ronald said he was 'lost' before he met Nancy

When Nancy Davis met Ronald in Los Angeles in 1949, it was as a working actress reaching out to the president of the Screen Actors Guild. An actress of the same name had appeared on the McCarthy-era Hollywood blacklist of Communist sympathizers, and it was impacting Nancy's ability to secure roles. Already a successful Hollywood leading man and ensemble player since signing with Warner Bros. Studios in 1937, Ronald had become Guild president in 1947, a year prior to divorcing his first wife, actress Jane Wyman.

Both said they were attracted to the other from the very beginning, but it would be three years before Ronald proposed. According to Nancy, in the years preceding their marriage Ronald had felt “lost,” and that life as one of Hollywood’s most eligible bachelors had been for her new husband like “wandering in the dark.”

“My life didn’t really begin until I met Ronnie,” Nancy wrote in her memoirs. Both ardent letter writers over the course of their lives, a correspondence from Ronald to his wife marking their twenty-ninth wedding anniversary showcases how deeply he felt about her. “Beginning in 1951, Nancy Davis seeing the plight of a lonely man who didn’t know how lonely he really was, determined to rescue him from a completely empty life,” Ronald wrote. “Refusing to be rebuffed by a certain amount of stupidity on his part she ignored his somewhat slow response. With patience and tenderness she gradually brought the light of understanding to his darkened, obtuse mind and he discovered the joy of loving someone with all his heart.”

Married in a low-key ceremony on March 4, 1952, their daughter Patricia (Patti) was born the following October and son Ronald (Ron) would arrive in 1958, joining Ronald’s daughter Maureen and adopted son Michael from his previous marriage to Wyman. Though they had acted together onscreen in Hellcats in the Navy (1957), by the mid-1960s, Nancy had retired from acting as Ronald focused on a life of public service following a nearly decade-long stint as company representative and host of the TV drama series The General Electric Theater. 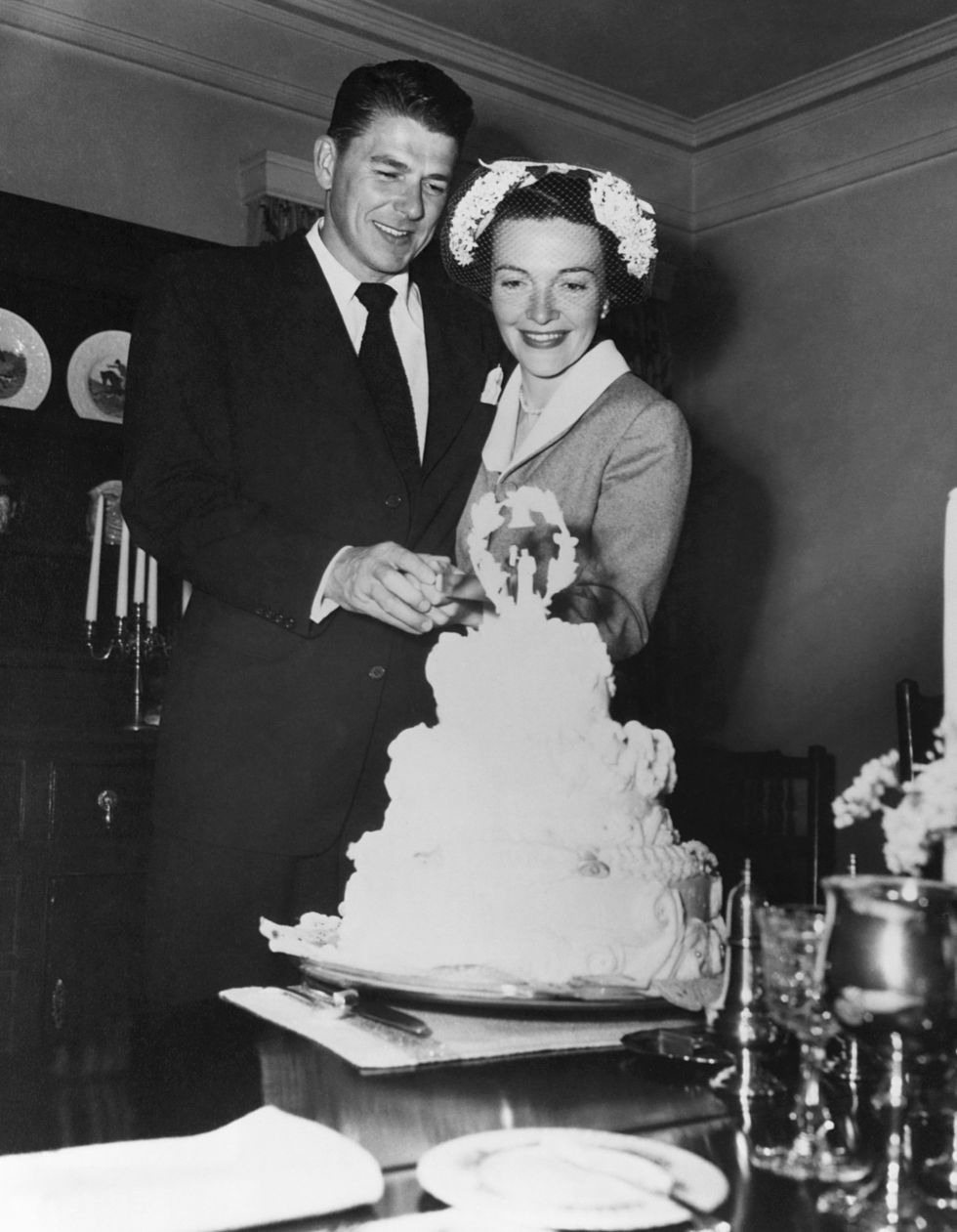 Ronald and Nancy Reagan cutting the cake at their wedding on March 4, 1952
Photo: © CORBIS/Corbis via Getty Images

After gaining national recognition for a televised speech supporting Republican presidential candidate Barry Goldwater in 1964, Ronald capitalized on his growing political profile to win the California gubernatorial race in 1966 and again in 1970. By her husband’s side, Nancy would become the socially adept, coolly glamorous first lady of California who would be appointed by Ronald to the California Arts Commission in 1967 and a year later would be named Woman of the Year by the Los Angeles Times. Her adoration of her husband was always apparent, from the devoted gaze she would bestow upon him during his myriad speeches, to their penchant for hand-holding both in private moments and highly politically charged environments.

A year after leaving the California capital, the Reagans set their sights on Washington, D.C. and the presidential race of 1976. Ronald would lose his bid to become the Republican Party’s candidate for president to incumbent Gerald Ford, who in turn would lose the election to Democratic challenger Jimmy Carter. Four years later Ronald would beat Carter in a landslide victory to become, at age 69, the then-oldest and first divorced person ever elected president of the United States, a position he would again attain in 1984. Hollywood had come to the White House and with it, a relationship Ronald friend and fellow actor Charlton Heston once described as “the greatest love affair in the history of the American Presidency.”

As president and first lady, the demands of their respective offices would separate the couple for extended periods of time, yet they ensured the other would always be reminded of their deep love through continued letter writing and casual notes left around the White House private quarters, many addressed by the president using terms of endearment such as Nancy Pants, Glamour Puss and Mommie.

“I was often asked, ‘Is this genuine? Do they really have this kind of bond?’” James Rosebush, former chief of staff to Nancy, told Good Morning America of their apparent love for each other. “And I said, ‘Oh yes, without question.’”

Already deeply protective of her “Ronnie,” the assassination attempt on Ronald’s life by John Hinckley Jr. in 1981 that left the president shot and wounded had a profound effect on Nancy, increasing her desire to shield her husband in all areas of his life, from ensuring he maintained a regular sleep schedule to running interference from perceived threats within his own administration. She became a power player in her own right, albeit behind the scenes at the White House, or publicly when she launched Just Say No, her anti-drug initiative.

While they grew closer, others around them often felt isolated

Such a deep, loving bond between two people often left little room for others, sometimes even their own children. During the White House years, the Reagans were particularly estranged from daughter Patti, and family feuds frequently played out on a public stage in direct contrast to the president’s “Family Values” platform. In her 1992, The Way I See It, memoir Patti accused her father of being emotionally detached and Nancy of being an abusive mother. Throughout, Ronald’s passion for his wife appeared only to grow. While wider reconciliation would come in later life, it was obvious to those within the extended family unit that the core would always be Ronnie and Nancy.

“If either of us ever left the room, we both felt lonely,” Nancy wrote of the attachment she and her husband shared. “People don’t always believe this, but it’s true. Filling the loneliness, completing each other — that’s what it still meant to us to be husband and wife.” 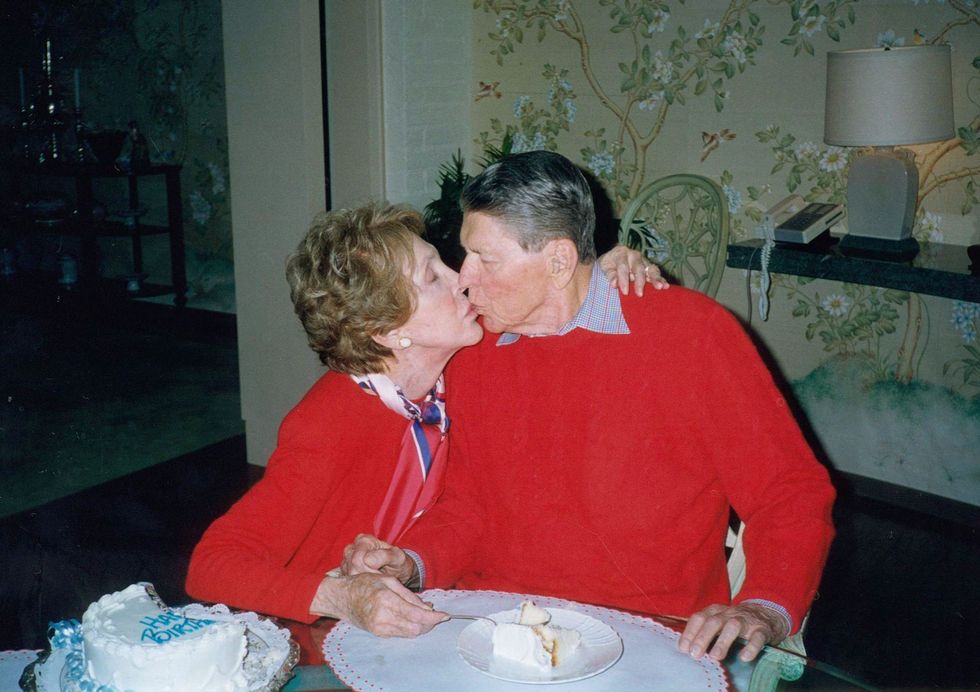 Ronald Reagan gets a kiss from his wife Nancy on his 89th birthday on February 6, 2000, at their home in Bel Air, California
Photo: Courtesy of Ronald Reagan Presidential Foundation/Getty Images

Nancy was Ronald's caretaker as he battled Alzheimer's disease

In 1989 the Reagans left the White House, retiring to their home in Bel Air, California, where Nancy penned her autobiography and the couple worked on the creation and building of the Ronald Reagan Presidential Library in Simi Valley. In a 1994 letter to the American people in which he revealed he was battling Alzheimer’s disease, the former President’s thoughts and emotions were still firmly with the woman he once described as having saved his soul. “I wish there was some way I could spare Nancy from this painful experience,” he wrote of his diagnosis.

Nancy took to the role of caretaker and guardian to her ailing husband with the same stoic dignity she brought to the role of first lady. Rarely seen publicly, she was by his side when he died, aged 93, on June 5, 2004. Nancy would go on to survive her husband by almost 12 years, before dying herself from heart failure on March 6, 2016, at age 94.

“I miss Ronnie an awful lot,” she told Vanity Fair in 2009. “I’ve had quite a life, when you stop and think about it. … I’m very lucky. Especially with Ronnie — I was the happiest girl in the world when I became a we. Even in the very beginning, I was always so proud of him. Everything he did. And it wasn’t that I had to force myself. I just was.” 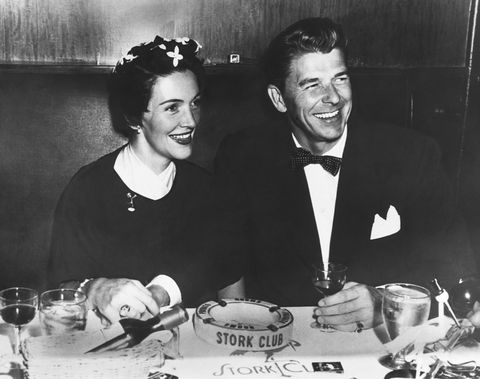