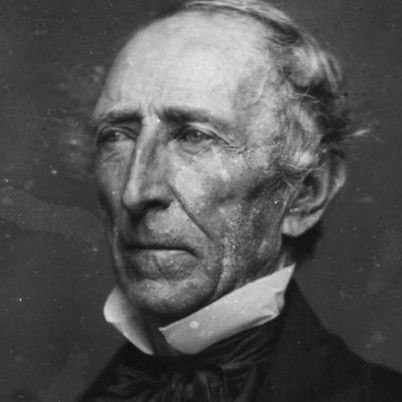 Who Was John Tyler?

Like his father, John Tyler served as governor of Virginia. Representing the Whig Party, he was the first vice president to become president due the death of his predecessor (President William Henry Harrison). Tyler was sworn in as the 10th president of the United States in 1841. He died after suffering a stroke on January 18, 1862, in Richmond, Virginia.

John Tyler was born on March 29, 1790, in Charles City County, Virginia, to a prominent family. Raised by parents John and Mary Armistead Tyler, he grew up with eight siblings, and they all received the best education available.

He studied law at the College of William and Mary, graduating in 1807, at the age of 17. After his admittance to the bar in 1809, Tyler worked for a prominent law firm in Richmond. His father became governor of Virginia that year, and at age 21, Tyler used his father's contacts to gain a position in the Virginia House of Delegates. After his father's passing, Tyler inherited a significant number of properties and slaves.

In the War of 1812, Tyler served as a military captain. He was then elected to the House of Representatives; he gained influence during his tenure in the House, from 1816 to 1821.

After leaving the House of Representatives, Tyler served in the Virginia State House of Delegates for several years before serving as the state's governor from 1825 to 1827. A champion for the South, Tyler joined Henry Clay, Daniel Webster and their newly formed Whig party in opposition to President Andrew Jackson.

In 1840, the Whig Party nominated Tyler as vice president to presidential candidate William Henry Harrison. Promoting themselves as "Tippecanoe and Tyler Too" (Harrison fought in the Battle of Tippercanoe), Harrison and Tyler won the election, and were inaugurated in March 1841.

Just one month later, President Harrison died from a cold that had developed into pneumonia. Subsequently, Tyler became the first U.S. vice president to be sworn in as president due the death of his predecessor. Opponents dubbed President John Tyler the "Accidental President" and "His Accidency."

The Whig Party expelled Tyler from its party after he vetoed a bill to revive the Bank of the United States. The following year, the president vetoed a tariff bill, and the Whig Party, led by Henry Clay, attempted to impeach him for misuse of veto power. The impeachment process failed to gain traction, and Tyler remained in power.

To gain favor during his bid for his re-election in 1844, Tyler supported the annexation of Texas into the Union. Concerned that he and Democrat James Polk would split the vote in the three-way presidential election with rival Henry Clay, Tyler withdrew to ensure Clay's loss.

After leaving the presidency, Tyler led efforts for Southern secession. He became a member of the Confederate House of Representatives. Tyler died in office on January 18, 1862, after suffering a stroke in Richmond, Virginia. He was buried in the Hollywood Cemetery in Richmond, Virginia—the same town that he died in.