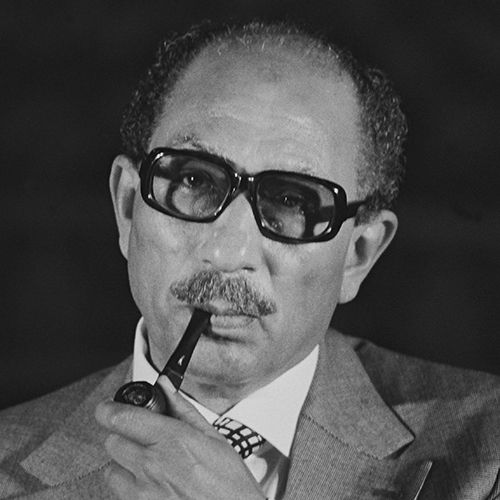 Anwar el-Sadat was an Egyptian politician who served in the military before helping to overthrow his country's monarchy in the early 1950s. He served as vice president and later became president in 1970. Though his country faced internal economic instability, Sadat earned the 1978 Nobel Peace Prize for entering into peace agreements with Israel. He was assassinated soon after on October 6, 1981, in Cairo, Egypt, by Muslim extremists.

Born into a family of 13 children on December 25, 1918, in Mit Ab al-Kawm, Al-Minufiyyah governorate, Egypt, Sadat grew up in an Egypt under British control. In 1936, the British created a military school in Egypt, and Sadat was among the first of its students. When he graduated from the academy, Sadat received a government post, where he met Gamal Abdel Nasser, who would one day rule Egypt. The pair bonded and formed a revolutionary group designed to overthrow British rule and expel the British from Egypt.

Before the group could succeed, the British arrested and jailed Sadat in 1942, but he escaped two years later. In 1946, Sadat was again arrested, this time after being implicated in the assassination of pro-British minister Amin 'Uthman. Imprisoned until 1948, when he was acquitted, upon release Sadat joined Nasser's Free Officers organization and was involved in the group's armed uprising against the Egyptian monarchy in 1952. Four years later, he supported Nasser's rise to the presidency.

Sadat immediately set about separating himself from Nasser in both domestic and foreign policies. Domestically, he initiated the open-door policy known as infitah (Arabic for "opening"), an economic program designed to attract foreign trade and investment. While the idea was progressive, the move created high inflation and a large gap between the rich and poor, fostering unease and contributing to the food riots of January 1977.

Where Sadat really made an impact was on foreign policy, as he began peace talks with Egypt's longtime foe Israel almost immediately. Initially, Israel refused Sadat's terms (which proposed that peace could come if Israel returned the Sinai Peninsula), and Sadat and Syria built a military coalition to retake the territory in 1973. This action ignited the October (Yom Kippur) War, from which Sadat emerged with added respect in the Arab community.

The Real Road to Peace

A few years after the Yom Kippur War, Sadat restarted his efforts to build peace in the Middle East, traveling to Jerusalem in November 1977 and presenting his peace plan to the Israeli parliament. Thus began a series of diplomatic efforts, with Sadat making overtures to Israel in the face of strong Arab resistance across the region. U.S. President Jimmy Carter brokered the negotiations between Sadat and Israeli Prime Minister Menachem Begin, and a preliminary peace agreement, the Camp David Accords, was agreed upon between Egypt and Israel in September 1978.

For their historic efforts, Sadat and Begin were awarded the Nobel Prize for Peace in 1978, and follow-through on the negotiations resulted in a finalized peace treaty between Egypt and Israel—the first between Israel and an Arab country—being signed on March 26, 1979.

Unfortunately, Sadat's popularity abroad was matched by a new animosity felt toward him in Egypt and around the Arab world. Opposition to the treaty, a declining Egyptian economy and Sadat's quashing of the resulting dissent led to general upheaval. On October 6, 1981, Armed Forces Day, Sadat was assassinated by Muslim extremists during a military parade commemorating the Yom Kippur War in Cairo, Egypt.