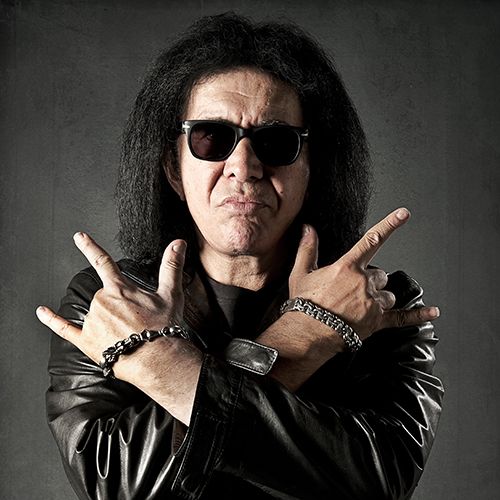 Who Is Gene Simmons?

Musician Gene Simmons first decided he wanted to be in a band while in middle school, after watching girls scream at The Beatles on television. He was in several bands before co-founding KISS with Paul Stanley in the 1970s. Simmons later pursued interests in fashion, publishing and acting, and starred in the A&E reality TV show Gene Simmons Family Jewels.

Simmons was born Chaim Witz on August 25, 1949, in Haifa, Israel. His mother, Flora, was a Hungarian Holocaust survivor, who watched her family die in the concentration camps when she was only 14 years old. After the end of World War II, Flora headed to Israel. It was there that she met carpenter Yeichel Witz, the man who would eventually become Simmons' father.

Yeichel and Flora's marriage began to dissolve shortly after Simmons' birth, mainly over arguments about money. Eventually, Simmons' parents agreed to separate, with Yeichel leaving for Tel Aviv to look for work. The family would never reunite, and Simmons would not see his father again.

Simmons' mother began raising him alone, and the family continued struggling in poverty. Flora found work in a coffee shop and often left Simmons in the care of babysitters. As a result, he quickly became fluent in Turkish, Hungarian, Hebrew and Spanish, in order to communicate with caregivers.

In 1958, when Simmons was 8 years old, he and his mother immigrated to New York to live with relatives in Flushing, Queens. After entering the country, Simmons changed his name to Gene because it was easier to pronounce, and took his mother's surname of Klein. He quickly learned English through comic books and television and entered the Hasidic theological seminary, called yeshiva, at the age of nine. He studied rigorously while his mother worked at a button factory in Williamsburg, Brooklyn.

After a year in the yeshiva, he transferred to a public school in Jackson Heights. It was during this time that he began to develop an interest in music. In his autobiography, Kiss and Make-up, Simmons admits his musical interests came while watching The Beatles on television one night. He thought, "If I go start a band, maybe the girls will scream at me." So, while attending Joseph Pulitzer Middle School, Simmons and a couple of friends created a band called The Missing Links in order to get the attention of their female classmates. The group, fronted by Simmons, won a school talent show and gave Simmons a modicum of fame.

This led to a series of bands for Simmons, including Long Island Sounds and Bullfrong Bheer. Simmons maintained dreams of stardom, but he also didn't want to disappoint his mother, who urged him to get his college degree. So, after high school, Simmons headed to Sullivan County Community College to get his associate's degree in education. After spending two years there, he returned to New York City to attend Richmond College and finish up his bachelor's degree.

Shortly after graduation in 1970, Simmons' bandmate and childhood friend Steve Coronel introduced Simmons to guitarist Stanley Eisen (later known as Paul Stanley). Stanley decided to join Simmons and Coronel's band, Wicked Lester, and the group began experiencing some success on the nightclub circuit. But the band wasn't pulling in enough money and, to support his musical aspirations, Simmons held a brief stint as a sixth-grade teacher in Spanish Harlem, followed by a job as an assistant at the Puerto Rican Interagency Council. Other odd jobs including time at the Kelly Agency as a temp, work as a deli cashier, a role as an assistant at Glamour and a job at Vogue as an assistant to editor Kate Lloyd.

Wicked Lester landed a lucky break after Stanley got the number of a studio engineer at Jimi Hendrix's studio, Electric Lady Studios. Instead of calling the engineer, however, Simmons called the head of the studio, Ron Johnsen. Stanley managed to convince Johnson to see the band perform and, after recognizing the group's promise, Johnson agreed to record and shop Wicked Lester's demo tape. Meanwhile, Simmons and Stanley did session work on the side, singing background vocals for artists such as Lynn Christopher, and learned how to use recording equipment.

With the help of Johnson, the group was picked up by Epic Records, who agreed to fund the recording of a full album. One of the conditions, however, was to replace Stephen Coronel with session musician Ron Leejack. Simmons and Stanley agreed to the arrangement, spending nearly a year to complete the new album. Once it was completed, however, Epic's A&R director said he hated the album and refused to release it. The next day, the group was dropped from Epic.

Determined not to let the failure affect them, Simmons and Stanley restructured the group. The first new member was drummer Peter Criss, who had placed an ad in Rolling Stone. Their second new member, guitarist Paul "Ace" Frehley, was chosen after he answered an ad in The Village Voice. By December 1972, the group had instituted a rigorous practice regimen and renamed themselves KISS.

With the help of a trainer, Simmons also learned how to breathe fire for his performances. The new group played their first concert on January 30, 1973, at the Popcorn Club in Queens, New York. There were only three members in the audience.

In October 1973, TV producer Bill Aucoin, who had seen the group perform, offered to become the band's manager. Simmons and his bandmates agreed, under the stipulation that Aucoin would get the group a recording contract within two weeks. Armed with demo tape produced by legendary engineer Eddie Kramer, who had worked with Simmons and Stanley during their time at Electric Lady Land, Aucoin landed KISS a contract with Casablanca Records.

Throughout the 1970s, the band toured virtually nonstop and became hugely popular for their over-the-top stage antics. KISS developed a large cult following during this time, with fans — called the "KISS Army" — often imitating the group's dress and make-up. But although KISS hit the road consistently, they wouldn't gain popular appeal until their live album Alive! (1975), hit the stores. The album spawned the group's first hit single, "Rock and Roll All Nite," which jumped onto the Billboard Top 40 charts.

Their next album, an ambitious recording called Destroyer (1976), became the second album to hit gold. With the release of the single "Beth," which hit No. 7 on the charts, the album went platinum. Later that year, the group released another successful album, Rock and Roll Over, followed by 1977's Love Gun and Alive II. All three albums hit platinum, and by the end of that year, KISS had been named the most popular band in America. KISS was also making a splash internationally. They topped the charts in Japan, Canada, Sweden and Germany, and performed five sold-out shows at Budokan Hall in Japan, breaking The Beatles' previously held record of four. 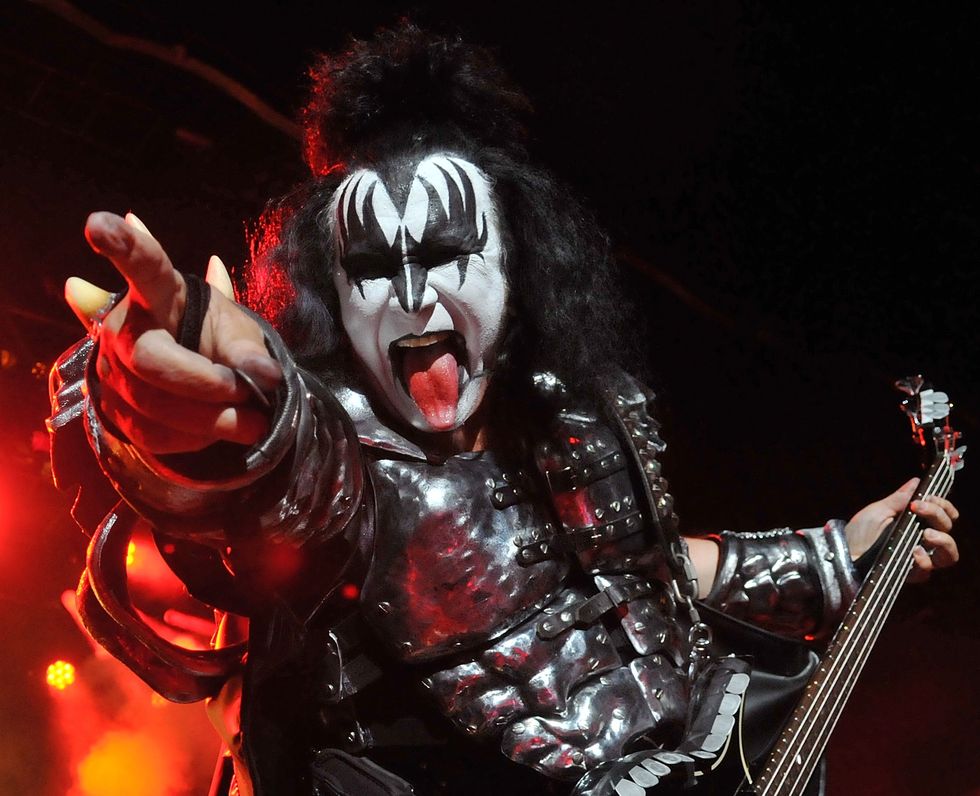 But as the band rolled successfully into the 1980s, tensions began to mount among the group's members. Criss had grown increasingly obstinate, refusing to practice and even stopping in the middle of songs during concerts. In December 1979, Criss officially left the group. After numerous auditions, he was replaced by musician Paul Caravello — later known by the stage name, Eric Carr. In 1982, Frehley, frustrated with the group's new musical direction, also left KISS. Frehley's replacement, guitarist Vinne Vincent, didn't mesh well with the group and went through a series of firings and re-hirings before leaving for good in 1984. He was succeeded by guitarists Mark St. John and, eventually, Bruce Kulick.

Stanley, Simmons, Carr and Kulick turned out to be a good fit creatively, and the group began releasing platinum albums such as 1985's Asylum, 1987's Crazy Nights and the 1988 greatest hits compilation Smashes, Thrashes & Hits. The group had also started appearing without make-up in 1983, relying less on flashy showmanship, and more on substance.

Simmons struggled to maintain enthusiasm for the new incarnation of his band, however, instead of focusing on a film career. His films, however, including B-movies such as Runaway (1984) and Trick or Treat (1986), never quite took off at the box office. Simmons and his bandmates suffered another setback when Carr discovered he had developed cancer. After battling the disease for several years, Carr eventually died of cerebral hemorrhaging in 1991.

KISS rallied in the midst of their grieving, taking on new drummer Eric Singer, and released the album, Revenge in 1992. The album made gold status and landed in the Billboard Top 10. While the most recent incarnation of KISS continued recording and touring, Simmons and Stanley also assembled a reunion tour of the original members in 1996. Performances with the original group continued in full make-up and costume, and grossed more than $43.6 million, making KISS the top concert act of 1996.

By this time, however, Simmons was busy pursuing other interests, including publishing, fashion and acting. The original group released the album Psycho Circus in 1998, the first album in almost 20 years by the original foursome. The original group once again dissolved, however, with Tommy Thayer replacing Frehley on lead guitar and Eric Singer replacing Peter Criss on drums. The reformed group continued to tour throughout the last decade. Then, in 2009, Stanley and Simmons announced that the original KISS would tour yet again, and release another album. Sonic Boom hit stores in October 2009. The group is currently on their farewell tour.

Simmons has been romantically linked to Liza Minnelli, Cher and Diana Ross, but has been living with actress and former Playboy playmate Shannon Tweed since the mid-1980s. The couple has two children, son Nick and daughter Sophie. The family made the leap to reality television in 2006 on the A&E television network with the show Gene Simmons Family Jewels. Each episode featured a different family adventure, from both Tweed and Simmons getting cosmetic surgery together to Simmons managing Nick's band. The show ran for six seasons, with season six featuring the wedding of Simmons and Tweed which took place on October 1, 2011, in Beverly Hills, California.

"Biography: KISStory" chronicled the band’s five decades in the business as founders Stanley and Simmons reflect on their historic career.

After 50 years of rocking and rolling all night and partying every day, the #1 Gold Record selling band of all time, KISS, shared their story of success before finally smashing their last guitar and extinguishing the fire-breathing demon. Stanley and Simmons, along with current members Thayer and Singer, as well as guests Dave Grohl (Nirvana, Foo Fighters), Tom Morello (Rage Against the Machine), manager Doc McGhee (Motley Crue, Bon Jovi), music producer Bob Ezrin (Alice Cooper, Pink Floyd) and more, told the wild story of the most successful and influential band in the world. Watch a preview: