Elvis Presley and Priscilla Beaulieu Presley first met when he was 24 and she was 14. Their age difference wasn’t a problem for Elvis, who thought he could mold Priscilla into his ideal woman. Going along with how Elvis wanted to shape her was at first acceptable to Priscilla. But as she grew older she began to seek more control over her own life, which was something their relationship couldn’t survive.

Elvis and Priscilla met when she was in the ninth grade

Elvis was stationed in West Germany during his stint in the U.S. Army. In 1959 Priscilla arrived in the country due to the Air Force transferring her father there. While she was out with her younger brother, a service member approached Priscilla and asked if she'd like to accompany him and his wife to meet Elvis. Her father, after checking in with the man's commanding officer, gave his approval for a visit.

On a November night in 1959, Priscilla, wearing a navy-and-white sailor dress, traveled to Elvis' temporary home in Bad Nauheim. She immediately captured the star's attention, even when she admitted she was a ninth-grader. He played several songs to impress her, including "Are You Lonesome Tonight?" But when she left that night, she assumed the evening wasn't going to be repeated. 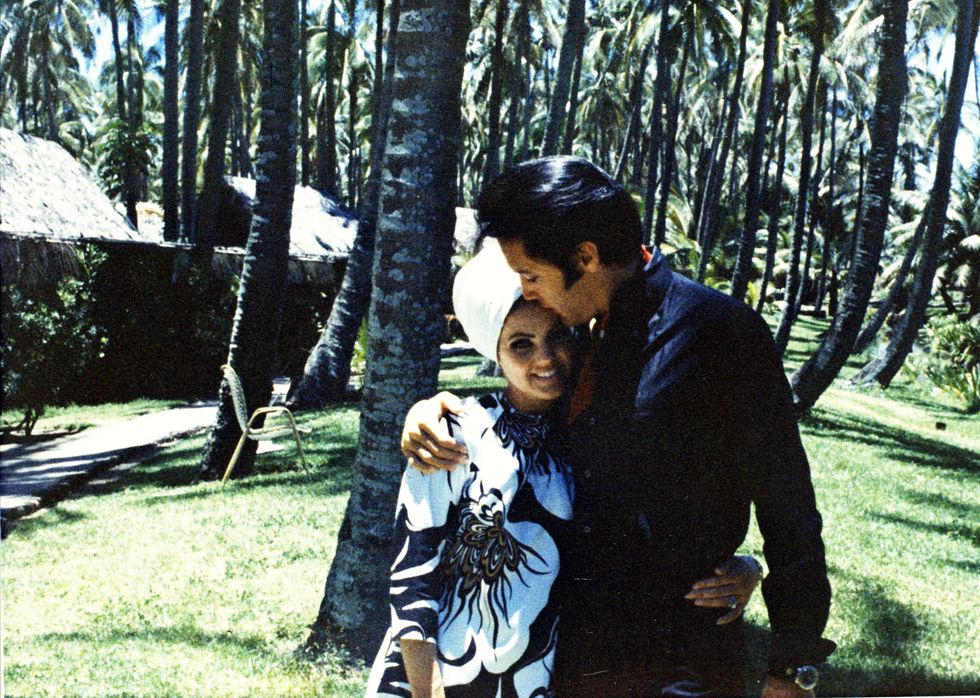 The singer liked that Priscilla was young and inexperienced

Elvis saw a resemblance between Priscilla and his recently deceased, and much lamented, mother, Gladys. He also told his friend Rex Mansfield that Priscilla was "young enough that I can train her any way I want." Elvis wanted Priscilla to visit again. The second time they met, he invited her to his room, where they kissed.

After Priscilla had been on four "dates" with Elvis, her parents said an in-person meeting was necessary. When it took place, Priscilla's father asked why a star was interested in his teenage daughter. Elvis responded, "Well, sir, I happen to be very fond of her. She’s a lot more mature than her age and I enjoy her company." The Beaulieus were charmed enough to allow Priscilla to keep seeing Elvis. For the remainder of his stay in Germany, he was the center of her world. She continued to go to school but fell behind — though she didn't take the pills Elvis offered when he noticed her fatigue. “I want you to take these; they’ll help you stay awake during the day," he told her.

Priscilla's age meant they couldn't go out in public, but they still saw each other often. The only thing they didn't do was fully consummate their relationship. As his time in the Army came to a close, Priscilla wanted to do so, but Elvis told her, "Someday we will, Priscilla, but not now. You’re just too young."

Elvis and Priscilla reconnected two years after he was discharged

In March 1960, Elvis, having finished his enlistment, left Germany. Priscilla sent letters, using pink envelopes to make them easy to locate among Elvis' fan mail. Her parents cautioned her that the star would likely forget her and that the relationship was over — but then he called her. And in 1962, he asked her to visit and worked to convince her parents to let their teenager travel to Los Angeles.

After Priscilla arrived, Elvis added Las Vegas to the trip's itinerary. During their time there, Priscilla began taking amphetamines and sleeping pills to keep up with Elvis' nocturnal schedule. She also started wearing new, more adult outfits, which Elvis had purchased for her. In addition, the singer had Priscilla's hair and makeup adjusted to suit his preferences, telling her, "I like a lot of makeup."

Priscilla also visited Graceland for Christmas that year. Next, Elvis asked her to finish high school in Memphis, which she was desperate to do. Her parents initially rejected the idea, but Priscilla continued to press the issue as Elvis tried to convince them that their daughter would be safely living with his father and stepmother. He also implied he wanted to marry Priscilla.

In the end, the Beaulieus agreed to send their daughter to Memphis, and Priscilla enrolled at Immaculate Conception High School. Though she stayed with Elvis' father and stepmother at first, she was soon living at Graceland. Before graduating in May 1963, she took pills that Elvis provided so she could go to classes during the day while being available for him at other times.

Elvis valued what he saw as Priscilla's purity, so their relationship remained sexless (however, throughout his relationship with Priscilla, Elvis was with other women, ranging from girl-next-door types to Hollywood co-stars). But they were intimate in other ways. One favorite pastime was using Polaroids to document sexual games such as the seduction of a student by his teacher.

Elvis also continued to remake Priscilla, who later described herself as "Elvis’ living doll, to fashion as he pleased." He had porcelain caps placed on her teeth and demanded she improve her posture. He was also molding her in his own image: her hair was dyed black like his, placed in an updo that matched his pompadour and her clothes needed to be in similar colors to his. 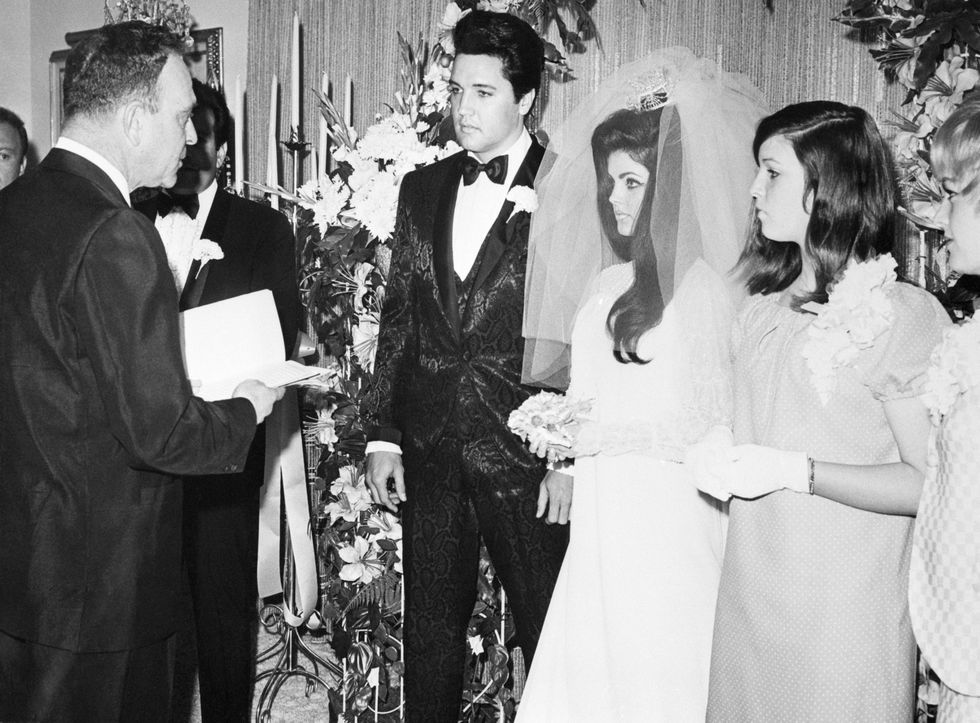 Elvis and Priscilla Presley during their wedding ceremony in Las Vegas on May 1, 1967.
Photo: Getty Images

Elvis and Priscilla didn't have sex until their wedding night

Over the years, Priscilla, who'd often been left at Graceland while Elvis went off to make movies, had been referred to as a "live-in Lolita." Elvis's controlling manager, Colonel Tom Parker, was worried about the potential fallout if they didn't marry.Likely due at least in part to Parker's prodding, before Christmas in 1966, Elvis proposed. And though the singer felt pressure about the whole arrangement, on May 1, 1967, they were married in Las Vegas.

Their wedding night was the first time the couple went "all the way." Priscilla also got pregnant right away, which made Elvis worry about how fatherhood would affect his career. When Priscilla was seven months pregnant, he asked for a trial separation, though they were only apart for a short time. Daughter Lisa Marie was born on February 1, 1968 — nine months after her parents' wedding.

Despite divorcing, when Elvis passed away, Priscilla 'wanted to die'

Priscilla discovered that Elvis was reluctant to sleep with her after she'd gone through childbirth. He told her he wanted her to have time to recover, but, as Priscilla later wrote, "He had mentioned before we were married that he had never been able to make love to a woman who’d had a child." As he had before they were married, Elvis slept with other women. But Priscilla was no longer willing to simply wait for him to come home.

Priscilla had a short-lived liaison with the owner of a dance school. And despite renewing vows in Hawaii, she continued to experience the limitations of her marriage. "My life was his life," she said to People magazine in 1978. "My problems were secondary." Still unfulfilled, she had an affair with her karate instructor, Mike Stone. In 1972, she told Elvis she was leaving him. When he found out about her affair, he wanted to hire a hitman to kill her partner but was convinced not to.

Their divorce, which was finalized on October 9, 1973, was an amicable one. Priscilla would say in a 2016 interview, "I did not divorce him because I didn't love him. He was the love of my life, but I had to find out about the world." They shared custody of Lisa Marie and regularly saw each other. After learning that Elvis had died on August 16, 1977, Priscilla was devastated. She wrote in her memoir, Elvis and Me, "I wanted to die."