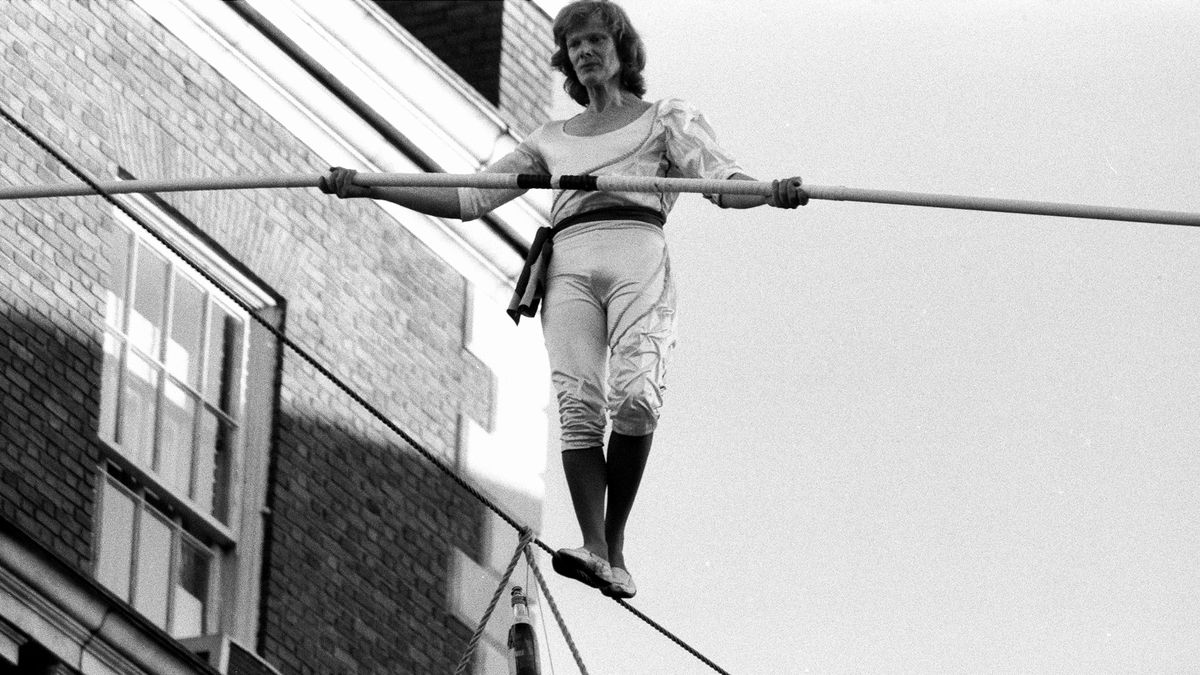 On August 7, 1974, a young Frenchman caught the attention of jaded New Yorkers by wire-walking between the twin towers of the World Trade Center. People in the street gasped at the sight 1,350 feet up, and the photo and film coverage of the seemingly spontaneous event was extensive enough that this ultimate high-wire act went 1974’s version of viral.

The 24-year-old acrobat in question was named Philippe Petit. He was initially regarded by police as a perpetrator and was arrested as soon as he left his perch, though charges were soon dropped. Petit’s feat was commemorated in James Marsh’s 2008 Oscar-winning documentary Man on Wire, and in The Walk, a film directed by Robert Zemeckis and starring Joseph Gordon-Levitt as Petit.

Here's a look back at the story behind “the artistic crime of the century":

A magician from the age of six and former street juggler, Petit began training on the wire as a teenager. In 1971, his first big public (and illegal) wire walk was between the towers of Notre-Dame Cathedral in Paris. His next came in 1973 when he walked between the pylons of the enormous steel arch Sydney Harbour Bridge in Australia. Perhaps these were just warm-ups for the big event since Petit traces his obsession to an article he read about the World Trade Center in 1968, during the construction of the twin towers. 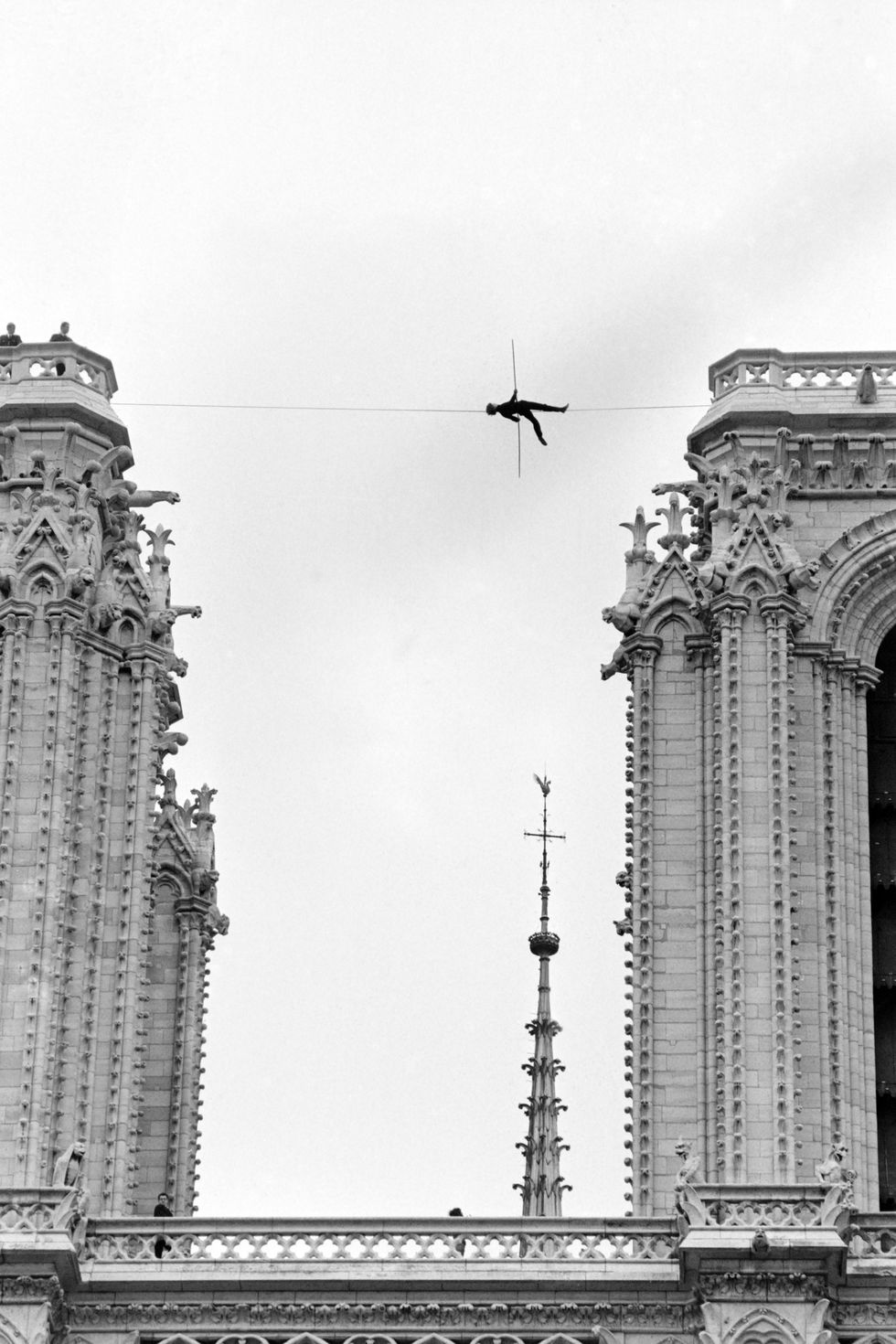 The walk, which lasted about 45 minutes, took months of planning

Petit first visited New York in January 1974, took a look at the Twin Towers, and gulped. But soon, he had hired a helicopter to take aerial photographs (the better to construct a scale model). He also managed to sneak to the roof of one of the towers for a close-up reconnaissance; accompanying him was his first co-conspirator, photographer Jim Moore. Others would follow: juggler Francis Brunn, who supplied some funding for the project; Petit’s girlfriend Annie Allix, who faithfully provided whatever assistance was needed along the way; and Jean-Louis Blondeau, whose logistical support was critical to carrying out the plan.

The towers, being so tall, were designed to flex in the wind. To compensate for this potentially lethal feature, Petit added simulations to his practice. He positioned a 200-foot wire (the estimated distance between the two towers) on supports in a French field, and as he walked across with his 50-pound, 26-foot balancing pole, over and over again, day after day, his cohorts shook away.

One major challenge Petit and his friends faced was how to get their equipment to the top of the World Trade Center. The tightrope he planned to walk across was steel cable, no more than an inch thick but, given the quantity Petit would need to link the towers, weighing in at anywhere from 500 to 1,000 pounds. And once they got the cable up to the top, how were they going to position it? You can’t just toss hundreds of pounds of wire across a 110-story high, 200-foot wide space.

He had to get a fake ID

Petit recruited other people along the way to assist in his quest, but none were as crucial as Barney Greenhouse, who worked for the New York State Insurance Department on the 82nd floor of the south tower. Captivated by the plan, Greenhouse obtained fake building IDs for Petit and his crew, which allowed them to impersonate workers and gain access, along with documents that authorized them to bring equipment to the upper floors. After stepping on a nail during one scouting mission, Petit found he didn’t even need his fake ID — no one asked questions of a man on crutches.

The team settled on the idea of using a fishing line to run the steel cable between the towers, and after much consideration, Blondeau came up with the solution of bow and arrow to shoot the line from one tower to the other. Another logistical feat was anchoring the cavalleti (stabilizing wires), which ordinarily make contact with the ground but in this case needed to be connected back to the towers. None of this could be done on the fly, so to speak: careful planning and rehearsal went into a final push that had to happen overnight.

That night, August 6, Petit and two teammates ascended to the 104th floor of the south tower with their equipment. When a guard approached, one of the conspirators panicked and fled, while Petit and the other man hid under a tarp on an I-beam over an open elevator shaft. They remained there for hours, finally emerging when all seemed quiet and made their way to the roof. Blondeau and another recruit had similarly snuck up to the roof of the north tower, and they shot the fishing line across. All did not go smoothly: The line was so thin it was difficult to locate (Petit found it by getting naked and feeling it on his skin), and the steel cable flopped around for a while between the towers before the men managed to get it positioned.

The walk itself went off without a hitch

Shortly after 7 a.m., Petit stepped off the south tower onto the wire and seemed to immediately find his confidence. He not only walked but knelt on one knee, laid down, conversed with gulls and taunted police officers ready to arrest him on either end. In all, Petit crossed the quarter-mile-high wire eight times.

The World Trade Center proved a tough act to follow, but Petit did not retire the wire and balancing pole

After one unauthorized walk inside the Gothic structure on New York’s Upper West Side, Petit was named artist-in-residence at the Cathedral of St. John the Divine. In September 1982, he wire-walked 150 feet over Amsterdam Avenue to the cathedral’s west face as part of a dedication ceremony. But most spectacularly, in 1999 he completed a 1,200-foot walk over a Little Colorado River branch of the Grand Canyon. This time, 1,600 feet separated the man on wire from the earth, where most of us can only stand and gape.