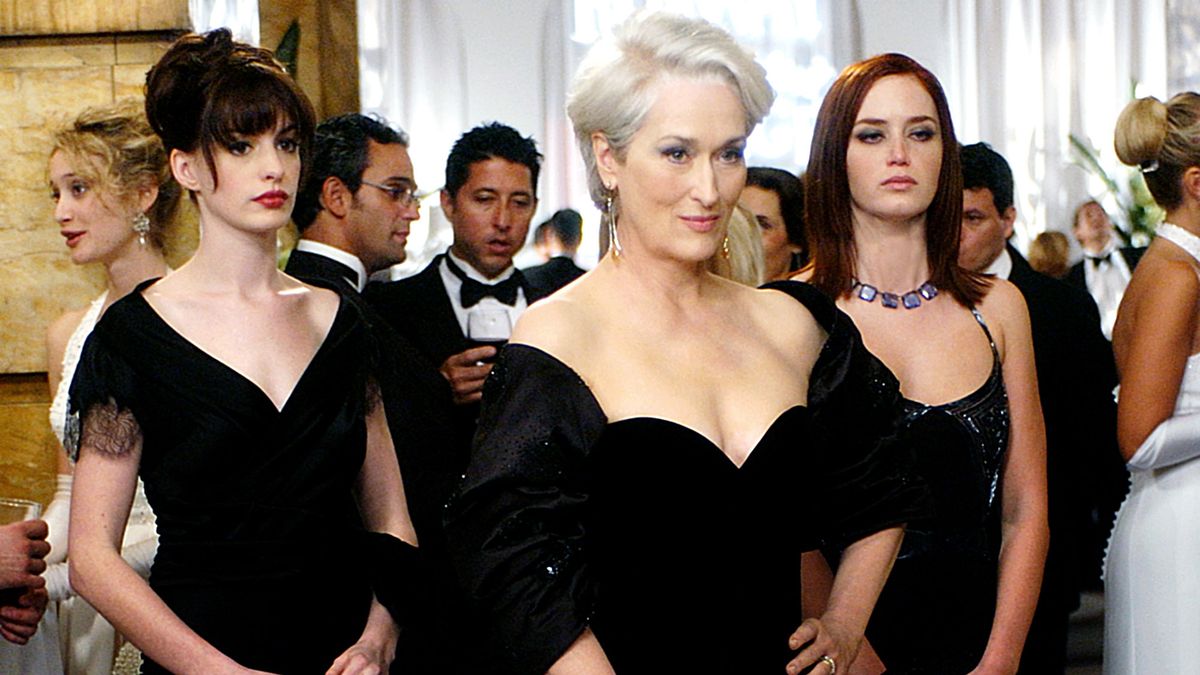 Based on Lauren Weisberger’s New York Times bestselling novel The Devil Wears Prada, the 2006 movie explored the tense relationship between magazine editor Miranda Priestly, played by Meryl Streep and her newest assistant, Andrea “Andy” Sachs, played by Anne Hathaway. The film was both a commercial and box office success, and its eminently quotable dialogue and fresh look at the fashion world has left a lasting influence on the cultural zeitgeist. Here are 10 facts you may not know about the film:

The film rights were bought before the book was even finished

After graduating from Cornell University with an English degree, Weisberger landed a position as an assistant to Vogue magazine editor Anna Wintour, working there for just under a year. Wintour, a legendary figure in the fashion and publishing world, had already cultivated a reputation as a demanding, strong-willed boss. Weisberger began working on the novel several years after she’d left Vogue, and the unfinished manuscript made the rounds to both publishing houses and film production companies.

Elizabeth Gabler, then the head of Fox 2000 studio, was immediately taken with the idea. As she told Indiewire, “The idea was so strong, the concept so clear and so enticing, that we thought we would be able to figure out a movie from it no matter what the eventual manuscript turned out to be.” Carla Hacken, Gabler’s development chief, was equally enthusiastic: "I thought Miranda Priestly was one of the greatest villains ever. I remember we aggressively went in and scooped it up.”

It took multiple tries to get the script right

Although everyone involved with the project saw its potential, the development process was tricky. Early drafts of the script came across as too mean-spirited and satirical, with the character of Andy obsessed with getting revenge on her cruel boss. Director David Frankel, who was in negotiations to helm the film, suggested shifting gears to focus on both the success (and sacrifices) made by a successful woman like Miranda in a male-dominated world. The producers hired a then-little-known writer, Aline Brosh McKenna (who would later pen several screenplays and co-create the TV series Crazy Ex-Girlfriend), who spent more than a year working with Frankel on a new script, which jettisoned much of the content from the last part of Weisberger’s book

Streep played hardball when it came to her salary

The legendary actress was everyone’s first choice to play Miranda. Streep quickly signed on, certain the film would be a success. But when she learned what producers had offered her for the role, she was offended. As she told Variety, "The offer was to my mind slightly, if not insulting, not perhaps reflective of my actual value to the project.” Perhaps inspired by Miranda’s sense of her own value, she considered backing out of the project: “I was 55, and I had just learned, at a very late date, how to deal on my own behalf.”

Streep won the battle, and her salary was upped to $4 million — twice what she was initially offered. She also won assurances that the final script would include scenes further humanizing Miranda and exploring what made her tick. As she said, “I wanted a scene where she is without her armor, the unpeeled scene in the hotel room — just to see that face without it protective glaze, to glimpse the woman in the businesswoman.” 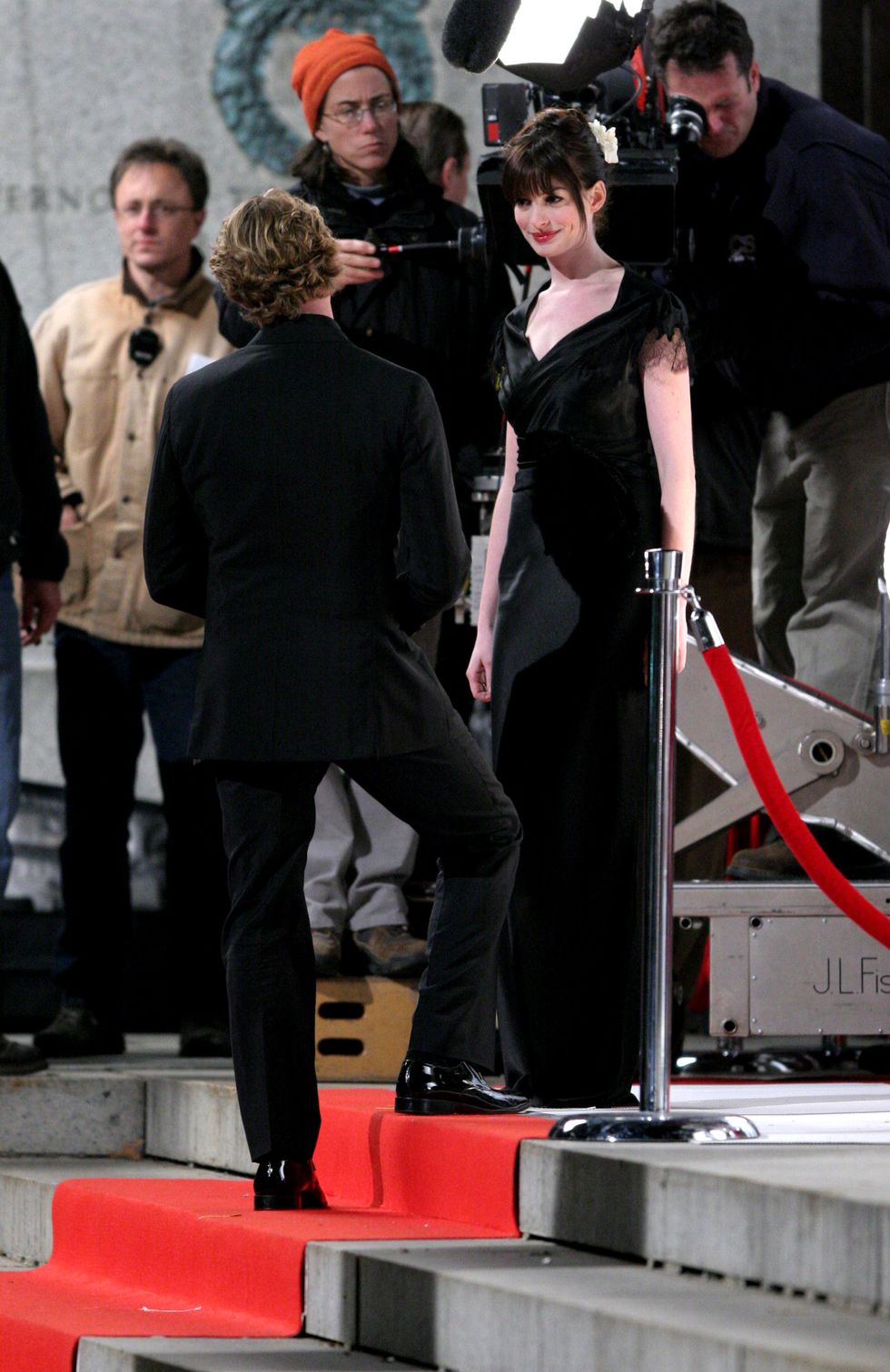 While Streep may have been the first choice to play Priestly, the studio was determined to cast Rachel McAdams opposite her as Andy. McAdams was coming off box-office successes The Notebook and Mean Girls, but she repeatedly turned down the role (as well as a number of other potential gigs in high-profile films during that period) in an effort to get away from more mainstream material.

Hathaway later said that she’d made her case to the studio, including tracing the words “Hire me” in the sand of a Zen garden in-studio exec Carla Hacken’s office. But Hathaway had director Frankel in her corner, and as she told Variety, “I didn’t have to audition. I had to be patient. I wasn’t the first choice.” In 2021, during a virtual appearance on RuPaul’s Drag Race, Hathaway revealed that she’d actually been the ninth choice for the role.

Casting the rest of the film was no easier. Stanley Tucci didn’t sign on to play Nigel until 72 hours before his first time on set. And producers auditioned more than 100 actresses for the role of Emily, Priestly’s senior assistant. British actress Emily Blunt was on the same studio lot during this period, doing several rounds of auditions and callbacks for another film, the dragon fantasy film Eragon, which would later open to scathing reviews.

A casting agent working on The Devil Wears Prada filmed an audition with Blunt, who was casually dressed in jeans and flip-flops because she was running late for a flight home to London. Despite her character’s American origins, she did the scene in a strict British accent, and the tape won over Frankel. Once the producers of Eragon officially passed on casting Blunt, Frankel quickly had her fly back for a meeting with Fox 2000 execs to seal the deal.

Streep based her performance on some surprising people

At the first table read before filming, the cast and crew were eager to see how Streep would approach her outsized character. As Hathaway said, “I think we all had an idea of what Miranda would sound like. It was a strident, bossy, barking voice.” Instead, Streep shocked everyone. “When Meryl opened her mouth and basically whispered, everybody in the room drew a collective gasp. It was so unexpected and brilliant," Hathaway recalled.

Streep, who famously stayed in character throughout the entire shoot, later admitted that she had gotten the idea for her voice from actor Clint Eastwood. “He never, ever, ever raises his voice and everyone has to lean in to listen, and he is automatically the most powerful person in the room,” she said. She based Priestly’s cutting, observant sense of humor on her close friend and frequent collaborator, director Mike Nichols.

Hathaway had to gain — and then lose — weight for the film

After signing on, Hathaway said that the producers asked her to gain 10 pounds to visually reinforce the fish out of water atmosphere her (already thin) character experiences in the cut-throat, weight-obsessed world of the fashion industry. Hathaway happily obliged, scarfing down beer, ice cream and pizza.

But when she met with designer Patricia Field, she was told she needed to shed the weight in order to fit into the couture outfits. It took Hathaway a month to gain the weight, and two months to drop it.

Stylist and designer Field got her start in New York’s downtown punk scene in the 1960s and '70s. But she’s probably best known for her work on another NYC cultural and style icon, Sex and the City. During her first meeting with Streep, the actress said he wanted to base her overall look on late Harper’s Bizarre editor Liz Tilberis, and her bright white hair on legendary model Carmen Dell’Orefice.

Fields immediately turned to designer and friend Donna Karan, scouring Karan’s fashion archives for clothes from the '80s and '90s to create Streep’s wardrobe. But other designers proved warier, perhaps concerned about blowback from the powerful Wintour. Fields cobbled together what she could from her contacts, but the film’s costume budget eventually grew to $1 million.

With a tight budget and a limited shooting schedule, Frankel and the producers were told that they could not film on location in Paris for the finale section of the film set during Fashion Week. They eventually relented, allowing Frankel to fly there on a weekend to shoot some locations. They were impressed enough with his “sizzle” reel to up the budget, allowing for two days on location.

But just for Hathaway and Simon Baker, who played a roguish writer and love interest for Andy. That was it. As Frankel told Indiewire, “We were not allowed to bring Meryl to Paris. She never went to Paris. We used green screen of her in the Mercedes, half shot on stage and using plates for Paris; she steps out of the Mercedes onto the steps of the Museum of the City of New York, and we used wide shots of her double in Paris.”

Blunt and Tucci are now family

In 2010, the recently widowed Tucci attended Blunt’s wedding to actor John Krasinksi, where he met her sister, Felicity. The two hit it off and were wed in 2012, with guests including Blunt and Streep. “Stanley is in my actual family,” Blunt told Variety. “How frightening is that? He’s married to my sister. All thanks to The Devil Wears Prada.”