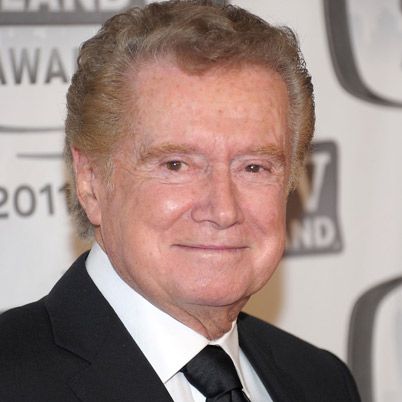 Who Was Regis Philbin?

Born in New York City in 1931, famed talk show host Regis Philbin grew up in the Bronx and attended the University of Notre Dame. He worked on various TV shows, eventually landing the co-hosting gig that would be known as Live! With Regis and Kathie Lee, and later Live! With Regis and Kelly. Philbin has also hosted the prime-time game show Who Wants to Be a Millionaire.

Regis Francis Xavier Philbin was born on August 25, 1931, in New York City. Part of an Irish Catholic family, Regis Philbin was the eldest son of Frank and Florence Philbin, and grew up in the Bronx. He was named after his father's alma mater, Regis High School, a Jesuit boys school in Manhattan.

After graduating from Notre Dame in 1953, Philbin served in the U.S. Navy. Following his discharge from the military, he began his television career with several entry-level jobs in Hollywood, including a post as a film-delivery man at KCOP-TV in Los Angeles, California.

Philbin got his first big break in the business after he began writing tongue-in-cheek reviews of the station's newcasts and tacking them up on walls, resulting in a position as a news and sports writer. This led to several news and feature reporting jobs in radio and television, and then to anchoring positions.

His first talk show, The Regis Philbin Show, on KGTV-TV in San Diego, spawned his now well-known style of "host chat." Without money for a writing staff, Philbin began each show sharing his own observations and engaging with the audience. This led to an Emmy-winning Los Angeles show called Philbin's People, in which he discussed current issues with popular celebrities.

Philbin took over hosting duties from Steve Allen on a nationally syndicated late-night talk show, and finally gained national exposure in 1967 as the "sidekick" on The Joey Bishop Show. Even though it was a great opportunity, Philbin was very unhappy during this stint. He felt constantly frustrated and humiliated by the show's star, whose jokes were often at Philbin's expense. Philbin then spent seven successful years on A.M. Los Angeles, and won an Emmy for his work on The Regis Philbin Show.

Philbin hosted the morning show Temp on KHJ-TV in Los Angeles for three years, and worked on two game shows for ABC, hosting The Neighbors and reporting for Almost Anything Goes. He also hosted a feature/magazine show for Lifetime Cable Network called Regis Philbin Lifestyles, which eventually became (another) The Regis Philbin Show in prime time.

In 1983, he joined Cindy Garvey on New York City's The Morning Show, but the show did not fare well in the ratings. Garvey was replaced by Kathie Lee Gifford in 1985, and the show was renamed Live! With Regis and Kathie Lee. The duo's on-air chemistry made the show a success, and it became nationally syndicated in 1988. For his part, Philbin received seven Emmy nominations after beginning his long run on the show.

In 1999, Philbin created new material for his memoirs by hosting the highest-rated prime-time game show in history, the U.K. import Who Wants to Be a Millionaire. Though initially slated for a two-week release in late summer, the success of the show insured its return.

After dominating the ratings race during the network "sweeps" period, it earned a regular place in the schedule, made the Philbin phrase "Is that your final answer?" a staple in pop-culture circles, and inspired competing networks to jump on the prime-time game show bandwagon. In February 2000, Philbin inked a deal with ABC's corporate owner, Disney, bringing his annual salary for Who Wants to Be a Millionaire to an unprecedented $20 million—the highest pay ever for a game show host. The next year, he was awarded a Daytime Emmy for Outstanding Game Show Host.

Millionaire was eventually moved into daytime syndication in 2002, and Philbin left the show to focus on other projects. In 2004, Philbin returned to ABC to host Who Wants to Be a Super Millionaire, a prime-time show that aired less frequently. To celebrate the 10th anniversary of the show, Philbin also hosted a handful of episodes of a special edition of Who Wants to Be a Millionaire in 2009.

In addition to the enormous success of Who Wants to be a Millionaire, Philbin's popularity as a talk-show host reached a new high after the departure of Gifford in 2000. After a much-publicized search for a new co-host, Philbin introduced his new foil, soap opera star Kelly Ripa, in February 2001. The show was then renamed Live! With Regis and Kelly. That same year, Philbin won a Daytime Emmy Award in for outstanding talk show host.

In 2004, Philbin broke the Guinness World's Record for Most Hours on Camera, with a total of 15,188 hours. He then celebrated his show's 20th anniversary in national syndication on September 14, 2007, with a special appearance by Kathie Lee Gifford. In 2008, he received another Daytime Emmy, this time for Lifetime Achievement. The next year, he announced that he would be taking time off from his hosting duties to undergo hip replacement surgery.

After a coronary heart disease scare triggered by high cholesterol, Philbin took on a role as spokesperson for the American Heart Association. In 1993, after undergoing angioplasty, Philbin made an exercise video, Regis: My Personal Workout. He is also a vocal supporter of his alma mater, Notre Dame, and received an honorary doctor of laws degree from the university in 1999 for his contributions to Notre Dame and South Bend, Indiana, where the school is located.

In July 2013, it was announced that the 81-year-old Philbin would be making a return to the small screen as host of Crowd Goes Wild, a sports series on the new cable network FOX Sports 1. In an online interview with the Wall Street Journal, Philbin said of the show, "I think we're gonna have a little humor now and then." Despite the high hopes, the show was canceled in April 2014.

In July 2015, Philbin appeared as a bartender on a segment of TODAY before revealing he would join the morning show as a regular contributor. "Regis brings his legendary charm and humor each time he visits TODAY," said co-executive producer Tammy Filler. "His energy is infectious, and when Regis is around, you never know what will happen."

Philbin was married to Kay Faylan from 1955-68; the couple had two children, Amy (born in 1961) and Daniel (1967). He has referred to his son, born with serious birth defects, as his hero. Philbin married Joy Senese in 1970, and they had two daughters, Joanna (1973) and Jennifer (1974). Joy was a frequent guest co-host on Live! and the host of her own interior-decorating show, Haven.