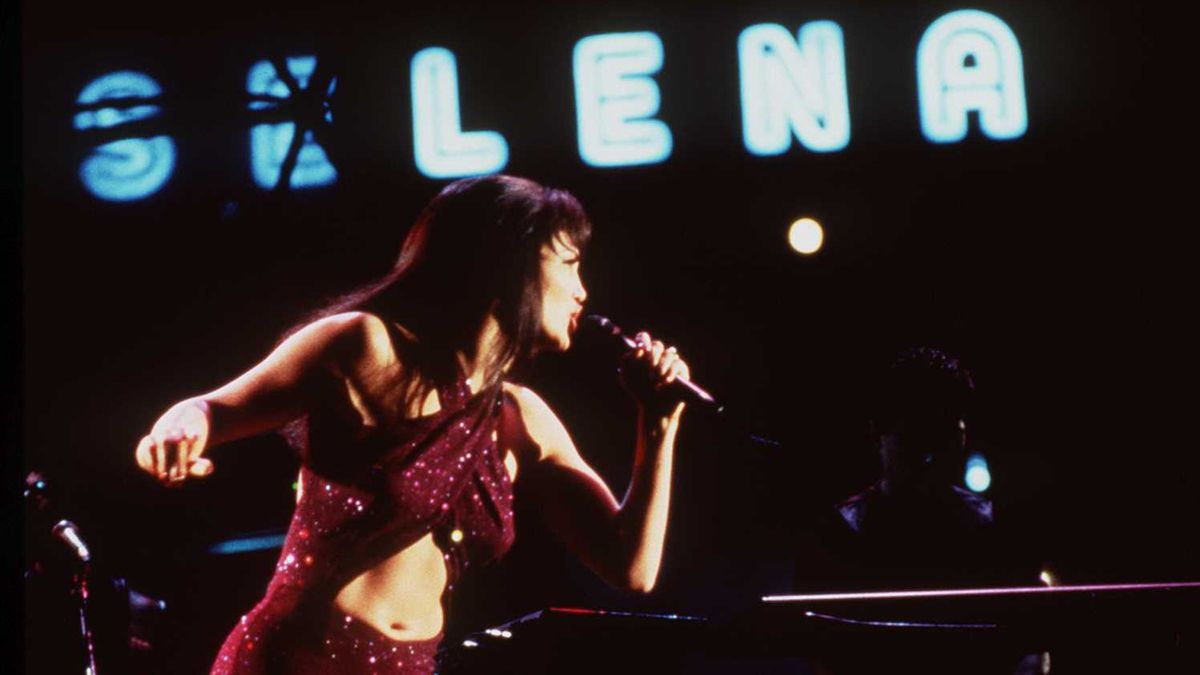 Long before she was known simply as J.Lo, Jennifer Lopez shed her own identity and became the late Latin recording artist Selena Quintanilla in the 1997 biopic movie, Selena.

First earning her name as a “Fly Girl” on the Fox TV series In Living Color, Lopez had appeared in a handful of films — Mi Familia (1995), Money Train (1995) and Jack (1996) — but playing the iconic singer was Lopez’s true breakout role, even landing her a Golden Golden nomination for best actress musical in a musical or comedy in 1998.

And it was well deserved. Lopez poured her soul into researching the role — even sleeping in Selena’s bed — to understand the tragically short life of the Queen of Tejano Music.

When Lopez first landed the role in 1996, the scars from Selena’s death in 1995 were still fresh. Along with that came backlash about Lopez being cast in the role. Among the reasons: that she wasn’t the “right kind” of Latina. “I know a few people were protesting,” Lopez told Entertainment Weekly. “But in Corpus [Christi, Texas, Selena’s hometown], everyone has been really supportive.”

The film’s director, Gregory Nava, added that “it was a little hurtful. [The protesters] should be celebrating that we have an all-Latino cast and that Jennifer Lopez, one of our own, is becoming a star.”

Lopez traveled to Corpus Christi to meet with Selena's family

Despite the criticism — and perhaps spurred on by it — Lopez took a deep dive into understanding Selena’s life.

“Right after I got the part, I knew I would be traveling to Corpus Christi and spending time with her family, but that wasn't going to be for a few weeks, so they sent me tons of tapes to watch,” she told Billboard. “I sat on my couch watching them for days and all of a sudden, the tape cut off on me. I was shocked. And I thought to myself, ‘That's what happened.’ This amazing, beautiful spirit, full of joy and music and so much feeling, was just cut off in the middle of being. It affected me so much and made me realize the importance of what I was doing.”

That symbolism made her commit even more. “It was about portraying her as best I could, to where people weren’t thinking of anybody but her when they were watching,” Lopez continued. “You have to think of the whole story and how you fit into that story and at the same time, who is that character, what makes them tick, all the way down to their mannerisms and what drove them emotionally.” 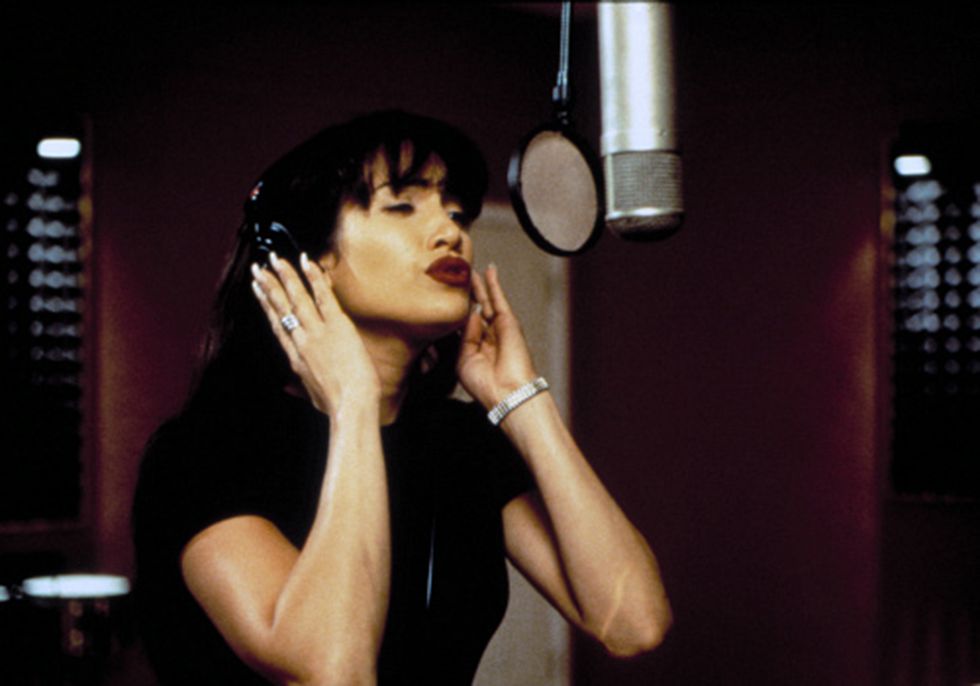 But watching footage wasn’t enough. She wanted to get to know the family who was still suffering from their shocking loss.

“I soaked up everything,” Lopez said in an Apple Music interview. “I slept in her bed at home. I talked to the whole family. I spent time with them. It can be melancholy and beautiful at the same time.”

The quality family time helped her really understand the innuendos of her life, telling Entertainment Tonight that she got to know “her sister, Suzette, her mother and father, I met her husband Chris and brother A.B.”

"We basically just hung out,” Selena’s sister Suzette Quintanilla remembers. “[Lopez] was just wanting to hear stories about Selena and our lives together and being on the road, and ‘How was this?’ She asked a lot of questions, ‘How was this? How did she do this?’ We watched videos together and I guess, [she] really just trying to vibe our family... not just who Selena was as a person, but us as a whole, as a family.”

It worked. During a later Grammy appearance when Lopez was dressed as Selena, Suzette said, “For a split second, I thought it was my sister.”

Playing the singer taught Lopez to live in the moment

Among the many things that Lopez picked up was the way that Selena lived her life — unabashedly seizing everything in the now.

“She had a sense of living in the moment, living in the present and following her heart,” Lopez told Billboard. “For me, that was the biggest lesson.”

The tragic twist pervades every aspect when looking back upon Selena’s short life. “The fact that she was so young and doing all of these things that people go through that maybe she wasn't ready for. The clothing line she was starting, getting married so young, things like that. I felt she had a sense to live in the moment, that you're not promised tomorrow,” Lopez reflected. “That affected me in my life far more profoundly than the movie did in career terms.”

Performing as Selena at the Houston Astrodome 'freed' Lopez

Getting all of Selena’s iconic looks right was a challenge with more than 30 outfits. “There were so many that I loved,” Lopez continued to Billboard. “The red bustier with the leggings that was her signature. Her jeweled bras. She had them in black and gold and white and red.”

And on top of that, they also had to recreate a concert in the Houston Astrodome. "It was a real concert; 30,000 to 40,000 people showed up, just for her, for that scene, to re-create it,” Lopez recalls. “Afterward, her mom came and hugged me and held me and cried. It was very emotional. It touched the family very much.”

That scene will forever have an impact on Lopez. “For me as an actress, at that moment, I had learned how to really become a performer and give everything I had to the audience. That really freed me up, and it was a very powerful moment.”

Even after her death, Lopez felt that the opportunity to learn from Selena’s career affected her own trajectory.

“If she was here, she would be doing what I’m doing right now,” she said. “It’s a sad story. It still gets to me. It really did mark my life at that time to get to know the family and work with them. It was an important part of my life. It still is.”

In fact, it was her learnings from Selena that propelled her to really focus on her music career. “I decided right after that movie to make my first record — and I did.”

She believes there is no 'next Selena'

The film itself also had a major impact on the industry as a whole. “It was a Latin movie, starring a Latin girl, playing a Latin artist and a Latin director. And it was like, ‘She’s worth this,’” Lopez told Variety. “It was a statement to the world.”

Even reflecting back to Billboard on the film’s 20th anniversary in 2017, Lopez notes Selena’s role as a breakthrough artist: “It has always bugged me that people would try to think that there's a ‘next Selena.’ It's like saying there's another James Dean or Marilyn Monroe. People like that don't come along every day... it's a special thing that Selena had. That's why we're still talking about her 20 years later.” 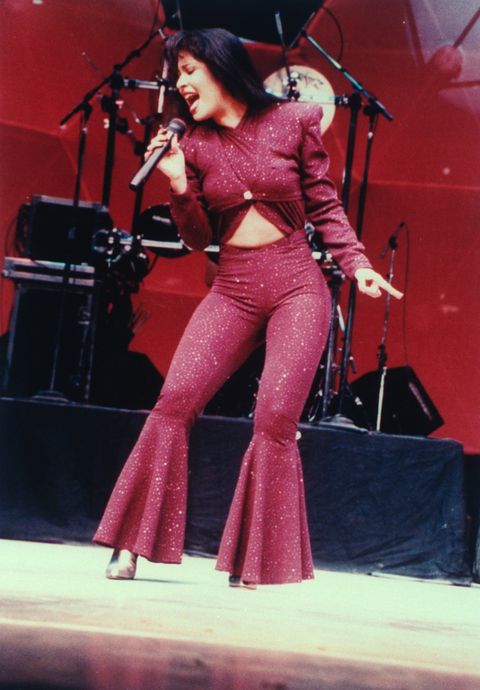