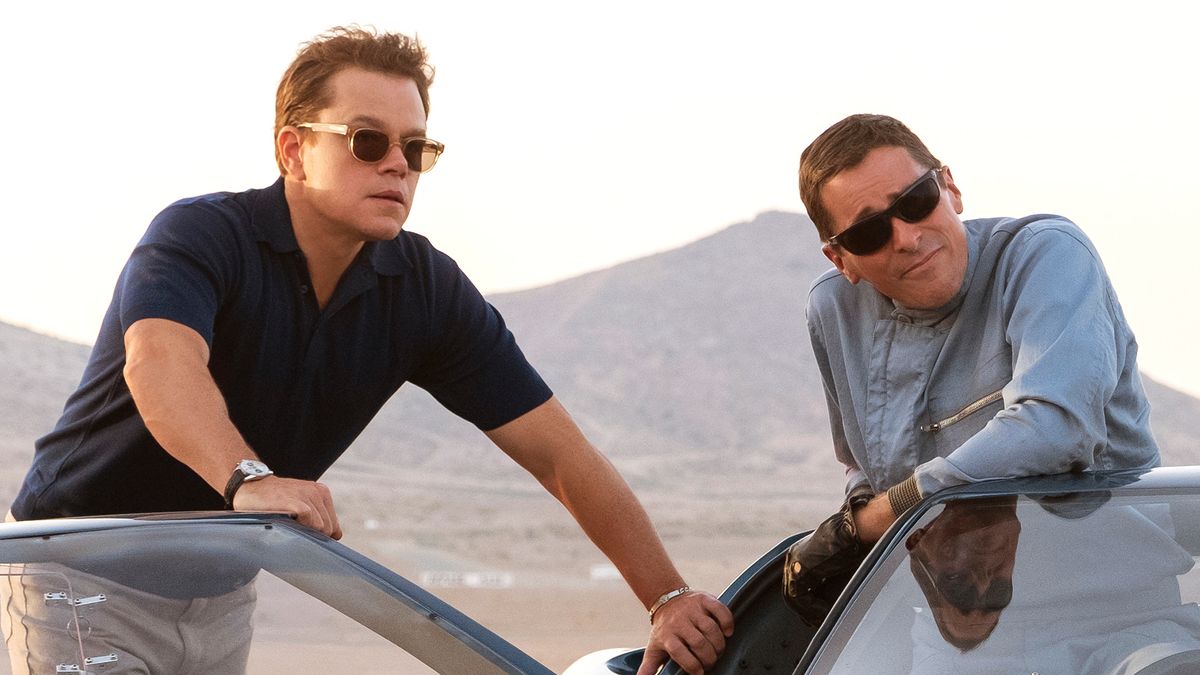 It was a clash of automotive titans. A years-in-the-making showdown pitting upstart Ford against reigning champion Ferrari for the checkered flag, and bragging rights, at the 1966 24 Hours of Le Mans endurance race.

Representing the old world was Enzo Ferrari, former motor racing driver and founder of his namesake marque. Henry Ford II was the torchbearer for the new world, enlisting the expertise of automotive designer Carroll Shelby and a new version of a car that would become a classic of international motor racing: the Ford GT40.

The bitter rivalry existing between the two brands in the lead up to the endurance challenge of ’66 had its roots in a business deal turned sour. In 1963 Ferrari – in dire need of an injection of capital for the company – had embarrassed Ford when, at the final hour, the Italian businessman walked away from a deal which would have seen the Ford Motor Company buy into the Italian brand and the two become a combined, transatlantic automotive racing force.

“Ford tried to buy Ferrari,” Ted Ryan, Ford Co. Archivist, told Fox 2 Detroit. “We negotiated, we had a final deal, Enzo had approved it, and we were all the way to the end with the signature and he backed out at the last second.”

Various sources place the blame on Ferrari’s displeasure at the prospect of losing autonomy over his cherished racing division. According to Ferrari’s personal secretary and confidante, Franco Gozzi, a clause in the contract stipulating Ferrari to seek approval for racing budgets over a stipulated figure brought the negotiations to a halt after 22 days. Per Gozzi, Ferrari said the clause “seriously compromised the total freedom I had been promised as racing team director.”

Others speculate that the negotiation with Ford had been a tactic to pressure fellow Italian company Fiat to step up to the plate and purchase the major stake in Ferrari, which it eventually did. 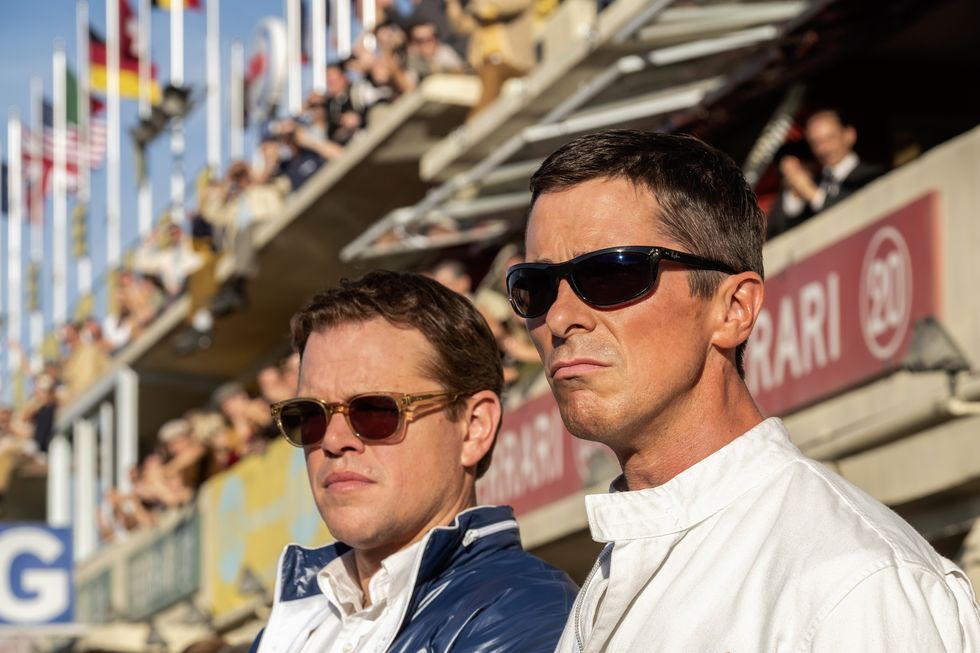 Ford wanted to seek revenge on the racetrack

Humiliated in the boardroom, Ford and his executives hatched a plan to get even with Ferrari at the place he had achieved his greatest successes: the racetrack. The American company invested a reported $10 million in its Le Mans program, in particular, the development of the Ford GT (for Grand Touring). The GT would become the GT40, the number corresponding to the legal height requirement for vehicles measured in inches at the windshield.

For all the monetary infusion into the program, Ford failed to deliver in 1964. A year later, none of the four vehicles developed and entered by the Americans in the 24 Hours of Le Mans even managed to cross the finish line. Worse for Ford, Ferrari continued to take the checkered flag, extending a winning streak in place since 1960.

Despite setbacks and the lackluster performance in ’64 and ’65, Ford was still determined to tame Ferrari’s prancing horse, enlisting the expertise of former racing driver and automotive designer Carroll Shelby. Shelby had proven success with the Daytona Coupe in 1964 and prior to that created and unleashed the first Cobra sports car to an adoring racing public. For the GT40 Sports Prototype racing program, Shelby helped develop the MKII variation of the car that had underperformed in the years leading up to 1966, in particular fine-tuning the transmission and improving reliability.

Shelby’s relationship with British-born Ken Miles, one of the drivers in the 1966 Ford team, provides the basis of the 2019 film Ford v Ferrari. Miles, (played by Christian Bale), was a driver who understood just how far he could push a vehicle on the racetrack, having previously worked with Shelby on the Daytona and Cobra development and racing. The film follows Shelby (Matt Damon) and Miles as they prepare for and compete in the 1966 French race.

Ferrari, confident having won the five previous endurance races at Le Mans, entered only two official cars in 1966. To the Italians’ disgust neither would complete the race, allowing the MKII vehicles from Ford a chance to end Ferrari’s racing dominance.

Ford entered eight cars that year. The three cars under Shelby’s direct supervision were driven by Miles and partner Denny Hulme, Dan Gurney with Jerry Grant, and Bruce McLaren and Chris Amon. Over 24 hours the Ford/Shelby team roared continuously around the eight-mile course winding through the French countryside, eating up miles as they headed to a victory that would alter the course of 1960’s racing history.

By the final pitstops, there were three Fords leading the race. Miles and Hulme in first place with McLaren and Amon in second, ahead of another Ford entrant driven by Ronnie Bucknum and Dick Hutcherson which, though 12 laps behind the leaders, was holding third. 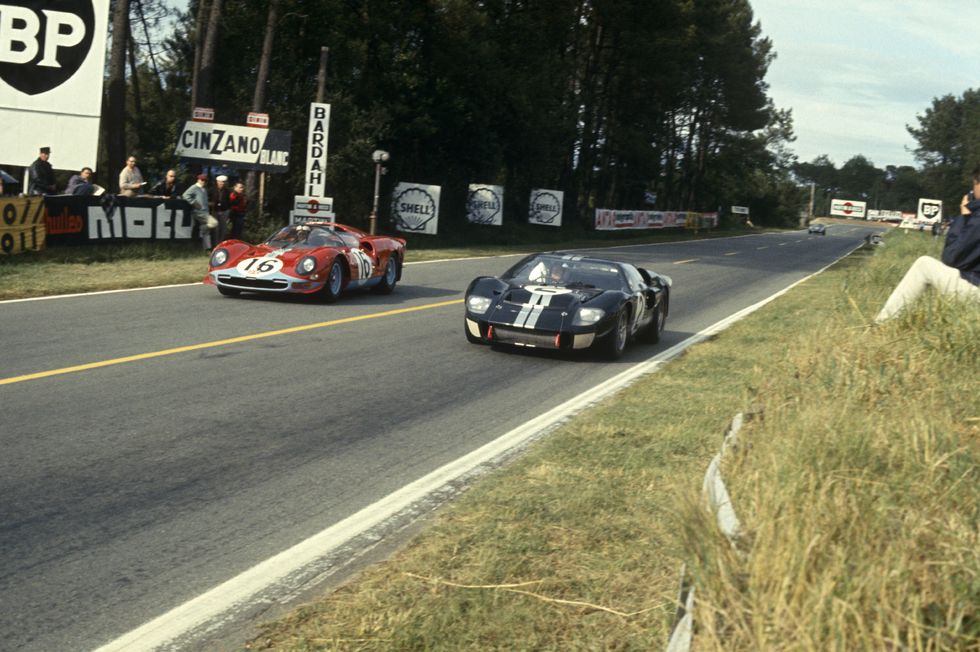 Ford wanted his cars to finish at the same time

With Ford now set to dethrone Ferrari, a decision was made in the pits to finish the race in a way that would cement Ford’s rising racing dominance and publicly show Ferrari the company’s might as a track leader. Leo Beebe, then Ford racing director, conceived of staging a dead heat by having the leading teams reduce speed and pull alongside each other in order for three Ford cars to cross the line simultaneously.

Though advised by track regulators that a dead-heat stunt win such as the one proposed would not be possible due to the staggered start of the race, Beebe pressed ahead and the cars took the checkered flag alongside each other. Ford had finally, and very publicly, beaten Ferrari.

After more than 3,000 miles averaging speeds of around 130 miles-per-hour, Ford took all 1966 podium honors at Le Mans. Having slowed to accommodate the Ford finish decision, the Miles team finished slightly behind the McLaren team. Had they arrived in tandem as planned, McLaren still would have taken first place having started a few spots behind Miles on the grid, thereby traveling slightly further overall in the race.

“Ken Miles, who later died, regrettably didn’t win the race that year. I had some real difficulties over that,” Beebe said of the decision to create a dead heat, according to Hemmings. “But he was a daredevil and I pulled him in and literally engineered the end of that race – one, two, three… I called Ken Miles in and held him back because I was afraid the drivers would knock one another off. All you need is one good accident and you lose all your investment.”

Miles was killed two months following the race at Le Mans while testing the next generation Ford GT40 at Riverside International Raceway in Southern California. As he approached the track’s back straight at top speed, his car suddenly flipped and broke into pieces, ejecting Miles who died instantly.

Debates have raged across decades over the decision to end the 1966 24 Hours of Le Mans in such a fashion choreographed fashion, but one thing not up for conjecture is Ford’s resounding win over Ferrari. Capitalizing on its investment and podium placement, Ford would return to Le Mans and win the race again in 1967, 1968 and 1969.