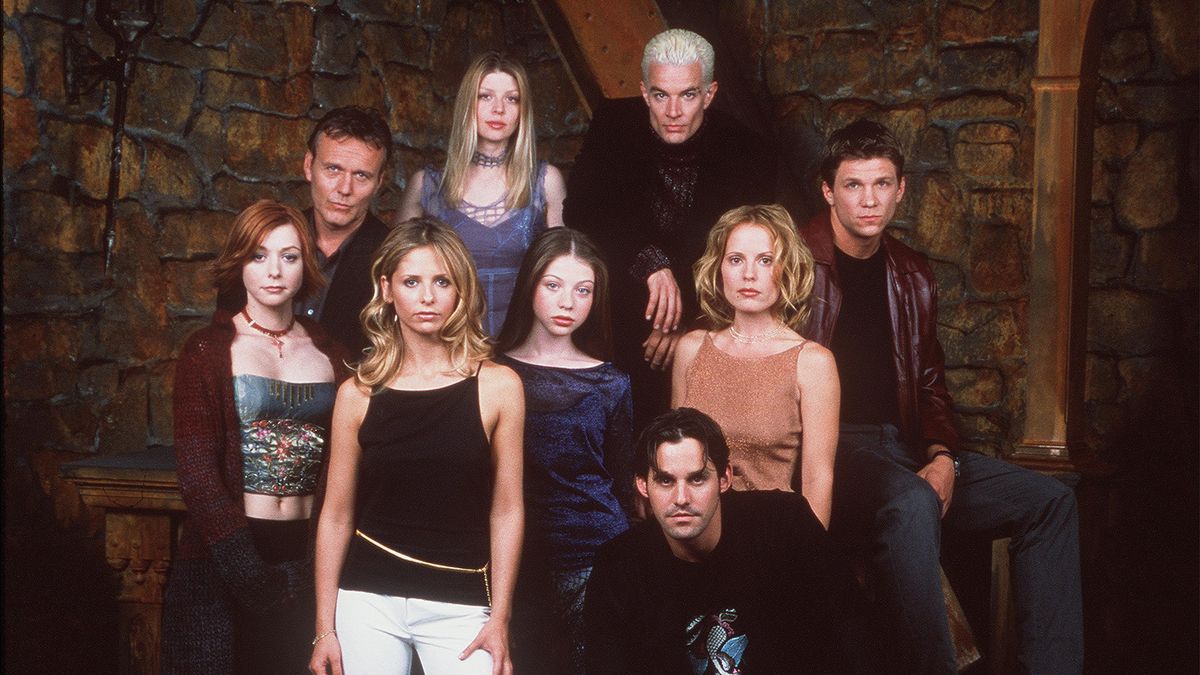 Five years after the Kristy Swanson/Luke Perry-led Buffy the Vampire Slayer came and went in theaters, a televised version reappeared on the upstart WB network in March of 1997.

This time, the concept showed stronger staying power. Based on creator Joss Whedon's original movie script, the TV series follows the exploits of a cheerleader-turned-vampire-slayer and her friends as they navigate young adulthood and battle the forces of evil that converge in their Southern California town. With its signature mix of high Gothic horror and teen comedy, "Buffy" enthralled viewers for seven seasons (the final two on UPN) and endures as a fan favorite from the era.

Here's a look at what the cast has been up to since the final battle that destroyed Sunnydale but also closed the Hellmouth portal for good. 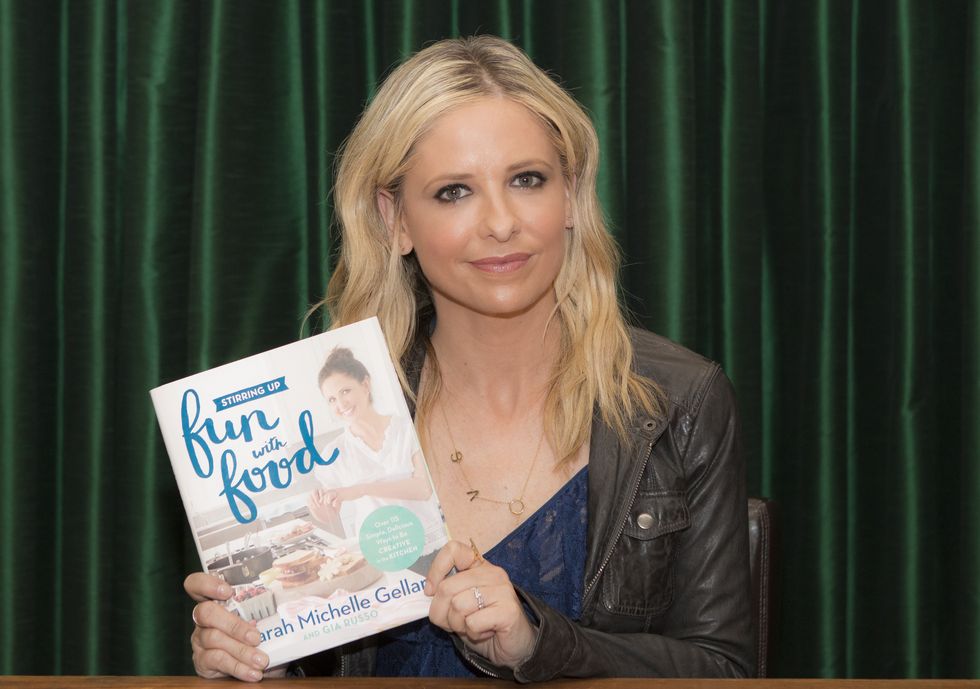 Gellar in 2017 with a copy of her book, Stirring Up Fun With Food: Over 115 Simple, Delicious Ways To Be Creative In The Kitchen
Tasia Wells/Getty Images

With her career on the upswing when she arrived as the Slayer, Sarah Michelle Gellar became one of Hollywood's biggest young stars over the next decade. She followed "Buffy"'s debut with the fright flicks I Know What You Did Last Summer and Scream 2 (both 1997), and went on to star in Cruel Intentions (1999), Scooby-Doo (2002) and The Grudge (2004). Gellar returned to the small screen in the 2010s with leading roles in "Ringer" and "The Crazy Ones," before providing voice work for the animated "Star Wars Rebels" and "Masters of the Universe: Revelation." She also found time to write Stirring Up Fun With Food (2017) and launch the family-friendly Foodstirs baking kits, when not raising her two children with Scooby-Doo co-star Freddie Prinze, Jr.

Following her turn as shy-nerd-turned-powerful-witch Willow Rosenberg, Alyson Hannigan made her mark on other popular franchises of the early aughts. She cracked up audiences as the "one time at band camp" flutist Michelle Flaherty in American Pie (1999) and its sequels, before settling into the shoes of Lily Aldrin on "How I Met Your Mother." The actress has also hosted "Penn & Teller: Fool Us" and the Food Network shows "Girl Scout Cookie Championship" and "Outrageous Pumpkins," while also contributing voice work to the Disney series "Fancy Nancy." But for all her successes, the actress remains tied to her vampire roots through her marriage to fellow "Buffy" alum Alexis Denisof, with whom she has two children.

After playing Xander Harris—who had a crucial role in the Scooby Gang despite a lack of significant powers—Nicholas Brendon continued in the supporting vein in most of his subsequent projects. He nabbed recurring roles in the series "Criminal Minds," "Private Practice" and "Faking It," while also starring in the TV movie A Golden Christmas (2009) and the independent feature Big Gay Love (2013). Beyond his screen credits, Brendon has co-written several "Buffy the Vampire Slayer" comic books for the Dark Horse imprint and has displayed his skills as an artist. However, his recent accomplishments have been eclipsed by a string of arrests for domestic violence and substance abuse issues.

Perhaps the biggest beneficiary from a high-profile "Buffy" role was David Boreanaz, who went from unknown actor to one of the small screen's more prominent leading men over subsequent decades. His vampire with a soul earned the five-season spinoff "Angel," for which he received three Saturn Awards for best actor on television. Boreanaz then co-starred for 12 seasons as FBI Agent Seely Booth on the crime procedural "Bones" before moving to the military drama "SEAL Team" as chief Jason Hayes, occasionally pulling double duty on both series as a director. The heartthrob actor has also become a father to two children with his second wife, Jaime Bergman.

Another vampire with eyes for the Slayer and a character arc that brought him to "Angel," James Marsters compiled an impressive list of credits in the wake of "Buffy." Regularly appearing on television, the Californian enjoyed recurring roles in "Smallville," "Without a Trace," "Caprica," "Hawaii Five-O" and "Witches of East End," before landing a regular gig on the Marvel series "Runaways." On the big screen, he surfaced in P.S. I Love You (2007), Dragonball Evolution (2009) and A Bread Factory (2018). Marsters has also served as the audiobook narrator for the long-running sci-fi/mystery series The Dresden Files, and has released albums both as a solo artist and a member of the group Ghost of the Robot.

The elder statesman of the main cast, London-born Anthony Head continued his successes on both sides of the Atlantic after seven seasons as Watcher Rupert Giles. He went on to roles in the series "Manchild," "Little Britain," "Merlin," "Dominion" and "Ted Lasso," while also nurturing his film career with appearances in Scoop (2006), The Iron Lady (2011) and Percy Jackson: Sea of Monsters (2013). Head was also seen on the British stage in productions of Six Degrees of Separation and Love In Idleness, and contributed to the BBC Radio programs Bleak Expectations and Cabin Pressure. And in what should come as no surprise to anybody who saw him sing and play guitar on "Buffy," the veteran performer has released a pair of albums featuring both original and cover songs.

Introduced as a cold-hearted cheerleader, Charisma Carpenter's Cordelia Chase embarked a redemptive path that transformed her into a key ally and carried her through four of five seasons of "Angel." From there, Carpenter enjoyed a solid career as a small-screen regular, if not quite a headliner; she landed recurring roles in the series "Charmed," "Veronica Mars" and "Greek," along with a prominent part in the short-lived "The Lying Game." The actress also joined Sylvester Stallone's all-star cast in The Expendables (2010), before her three-season stint as host of Investigation Discovery's "Surviving Evil." In early 2021, Carpenter made headlines for tweeting about her clashes with Whedon behind the scenes of "Buffy" and "Angel," opening the door for other cast members and writers to reveal their related experiences on set.