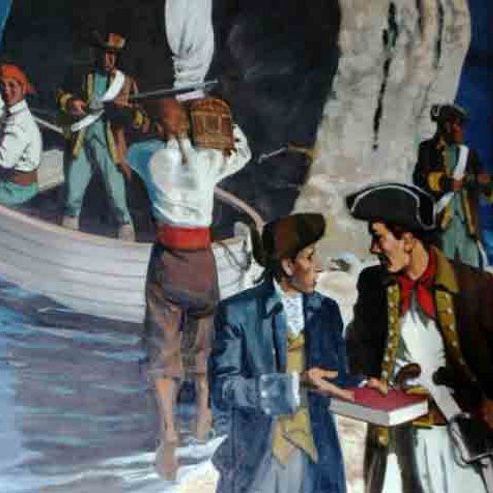 Who Was Abraham Woodhull?

During the American Revolution, Abraham Woodhull became a member of the Culper Spy Ring, which provided intelligence to George Washington to assist the Patriots’ war effort. Historians believe that he and his co-conspirators probably uncovered Benedict Arnold’s treason, and the information that led to arrest of British Major John Andre.

Abraham Woodhull was born in 1750 in Setauket, a town on Long Island, New York. He was the son of a prominent judge who supported colonial independence.

Woodhull began spying for the Continental Army in late 1778, as part of the Culper Spy Ring. Following the directions of Benjamin Tallmadge, his childhood friend and General George Washington’s director of military intelligence, Woodhull operated under the code name "Samuel Culper." He traveled regularly from Setauket to Manhattan, ostensibly to visit his sister. However, the British quickly suspected him of spying; they even went to Setauket to arrest him in June 1779, although he avoided trouble since he wasn't at home. The near-miss left him shaken, but he was compelled to find another way to continue spying.

Woodhull enlisted Robert Townsend, a merchant who conducted business in Manhattan, to gather intelligence about British military plans. Under the alias "Samuel Culper Jr.," Townsend sent information by courier to Woodhull’s farm in Setauket. After collecting the messages, Woodhull waited for signals from his neighbor and fellow conspirator, Anna Strong, who communicated by hanging specific laundry out on her line. Woodhull was thereby able to locate and relay messages to whale boat captain Caleb Brewster, who then delivered them to Tallmadge.

The Culper Ring was probably Washington’s most successful spy operation. Their reports are believed to have uncovered Benedict Arnold’s treason, and led to the capture of British Major John Andre, who was working with Arnold to undermine the Continental Army. In addition, the Culper Ring likely helped prevent a British attack against French forces that had arrived in Rhode Island to assist the colonists.

Woodhull and the Culper Ring continued spying until the war's official end in 1783, although it appears they did not gather much useful intelligence during their final years.

In 1781, Woodhull married Mary Smith. The couple had three children. After her death in 1806, Woodhull remarried in 1824.

Woodhull held several important local positions in his later years, including magistrate of Setauket, judge of the Court of Common Pleas and first judge of Suffolk County. He died in 1826 in Setauket.