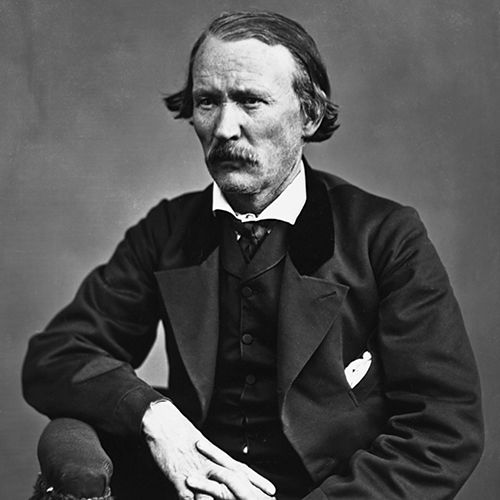 Who Was Kit Carson?

Kit Carson was an American frontiersman who became an experienced hunter and trapper by his 20s. After meeting explorer John C. Frémont in 1842, Carson was an active participant in extending the boundaries of the United States to its present size. He became a federal Indian agent in the 1850s and later served the Union Army in the Civil War. Carson is remembered as an icon of the frontiersman days of the American West.

Born on December 24, 1809, Christopher "Kit" Carson became one of the most famous figures in the American West. He grew up on the Missouri frontier on lands bought from the sons of frontiersman Daniel Boone. From an early age, Carson knew both the beauty and the danger that this area possessed. He and his family often feared attacks on their cabin from Native Americans.

When Carson's father, a farmer, died in 1818, Carson did his best to help out his mother, who had 10 children to raise on her own. He gave up on his education and worked the family's lands. Carson never learned to read—a fact he later tried to hide and was ashamed of.

Carson was apprenticed to a saddlemaker in Franklin, Missouri, at age 14, but he longed for freedom and adventure. In 1826, Carson fled Franklin, breaking his contract with the saddlemaker. He headed west on the Santa Fe Trail, working as a laborer in a caravan of merchants.

Carson eventually learned the ins and outs of trapping in the sometimes hostile lands of the West, proving tough and durable despite his small frame. In 1829, Carson joined with Ewing Young to trap in Arizona and California. He also worked for Jim Bridger and the Hudson Bay Company at different times, as well.

Along the way, Carson learned to speak Spanish and French fluently. Often immersed in Native American lands and cultures, he also learned to communicate in several of their languages and even married two Native American women. Unlike many other men in his profession, Carson was noted for his unassuming manner and temperate lifestyle, with one acquaintance describing him as "clean as a hound's tooth."

In 1842, Carson met explorer John C. Frémont, an officer with the United States Topographical Corps, while traveling on a steamboat. Frémont soon hired Carson to join him as a guide on his first expedition. With his many years spent in the woods, Carson was the ideal candidate to help the group make their way to the South Pass in the Rocky Mountains. Frémont's reports from the expedition, which praised Carson, helped make him one of the era's most famous mountain men. Carson also later became a popular hero in many Western novels.

In 1843, Carson accompanied Frémont to survey the Great Salt Lake in Utah and then to Fort Vancouver in the Pacific Northwest. Carson also guided the 1845-46 expedition to California and Oregon. During this time, he found himself caught in the Mexican-American War. While in California, Frémont's mission changed into a military operation, and he and Carson supported the uprising by American settlers that became known as the Bear Flag Revolt.

Sent to Washington, D.C., to deliver the news of the victory, Carson only made it as far as New Mexico, where he was directed to guide General Stephen W. Kearny and his troops to California. Kearny's men clashed with Mexican forces near San Pasqual, California, but they were outmatched in the fight. Carson slipped past the enemy to secure aid from American troops in San Diego. After the war, Carson returned to New Mexico, where he lived as a rancher.

In 1853, Carson took on a new role, agreeing to serve as a federal Indian agent for northern New Mexico, primarily working with the Utes and the Jicarilla Apaches. He saw the impact of western migration of the white settlers on the Native Americans, and he believed that attacks on white people by Native Americans were committed in desperation. To prevent these people from becoming extinct, Carson advocated for the creation of Indian reservations.

With the outbreak of the Civil War in 1861, the Union tapped Carson to help organize the First New Mexico Volunteer Infantry Regiment. Serving as a lieutenant colonel, he was involved in the bloody clash with Confederate soldiers at the Battle of Valverde in 1862.

Carson also led campaigns against Native American tribes in the region, most infamously the effort to force the Navajo to relocate to the Bosque Redondo reservation at Fort Sumner. Carson and his men destroyed crops and killed livestock, their onslaught paving the way for traditional enemy tribes of the Navajo to follow with their own attacks. Starving and exhausted, the Navajo finally surrendered in 1864, and were forced to march about 300 miles to the reservation. The journey, known as the Long Walk, proved to be brutal, costing the lives of hundreds of participants.

Promoted to brigadier general in 1865, Carson moved to Colorado after the war and was appointed the commander of Fort Garland. He negotiated a peace treaty with the Utes during this time before resigning in 1867 because of declining health.

Carson spent his final months as superintendent of Indian affairs for Colorado Territory. Following a grueling trip to the East Coast in 1868, he returned to Colorado in terrible condition. After his third and final wife died in April, Carson followed approximately a month later, on May 23, 1868, reportedly delivering the last words, "Doctor, compadre, adios!"

An icon of the frontiersman days of the American West, Carson is remembered through the designation of such locales as Carson City, Nevada, and Carson Pass in California. Along with the dime novels that bolstered his legend while he was still alive, he was memorialized in Western-themed movies and TV shows like The Adventures of Kit Carson, which aired from 1951 to 1955.

Carson's life was reexamined in the 2006 book Blood and Thunder: An Epic of the American West, by Hampton Sides. In early 2018, he was featured in the History Channel's documentary series Frontiersmen.