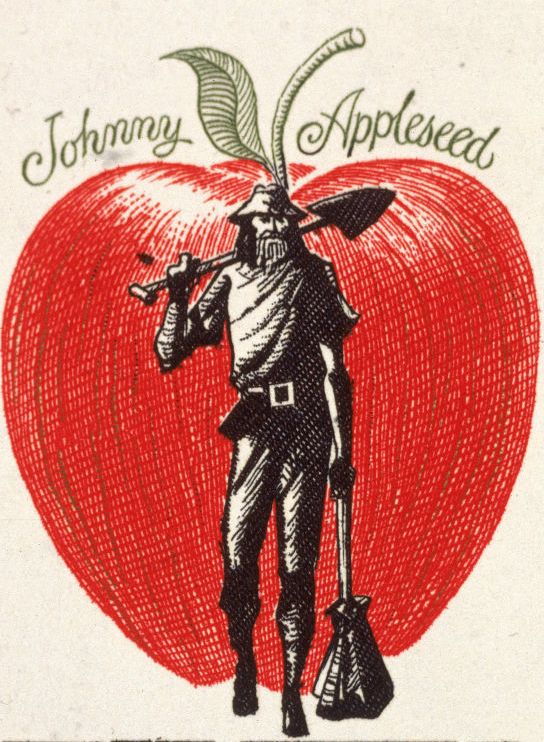 If you like apples, you owe a debt of gratitude to Johnny Appleseed — whose real name was John Chapman — for helping spread them throughout America.

Still, there's more to Chapman's story than apples. From his love of animals to his unusual personal life, here are seven facts you may not know about Appleseed:

Chapman was an 18th-century businessman who sold apple seedlings for about six to seven cents apiece. However, if people were low on funds he was willing to barter goods in exchange for his seedlings (he'd happily accept old clothing, which explains how he got a reputation for threadbare attire). And when a struggling family had nothing to trade, Chapman would give them seedlings; at times he even included a gift of cash.

Chapman was also willing to offer his shoes to someone in need. Of course, this wasn't the sacrifice it might've been for another person — Chapman's feet were allegedly so tough that he could stick needles into his soles without any ill effects (a trick he used to entertain children).

His generosity didn't keep Chapman from being successful. At the time of his death, he owned approximately 1,200 acres of property.

He wouldn't hurt a fly

Chapman's attitude toward animals was one PETA would definitely approve of. First of all, he was a vegetarian. Chapman also used some of his income to purchase mistreated horses so that he could place them in safe and healthy environments.

And Chapman didn't stop at trying to help domesticated animals. There are stories that he doused a fire to avoid hurting mosquitos, once chose to camp in the snow so as not to importune a bear and her cubs and rescued a wolf from a trap in order to nurse it back to health.

But Chapman was still human. When a rattlesnake bit him, he reacted by striking back — an action he came to regret. According to an 1871 article in Harper's New Monthly Magazine, Chapman later said, "Poor fellow, he only just touched me, when I, in the heat of my ungodly passion, put the heel of my scythe in him and went away."

The article also recounts that Chapman, being a die-hard animal lover, returned to check on the snake. Unfortunately, the creature hadn't survived.

He thought romance could wait

With an itinerant lifestyle and no permanent home (he apparently spent one winter living in a hollowed-out stump), it may seem obvious as to why Chapman remained single. Even so, rumors abounded about his love life.

One story was that Chapman hadn't recovered after being disappointed in love as a young man. Others thought that Chapman's religion — he was a member of the Church of Swedenborg, or New Church — led him to believe that his soulmate was waiting for him in heaven.

The most disturbing rumor was that an adult Chapman had gotten engaged to a 10-year-old girl. But when he later saw his intended flirting with someone closer to her own age, Chapman ended the engagement.

Planting apple or pear trees was a way for settlers to have their land claim recognized by the government (an orchard demonstrated they intended to stay permanently). By selling seedlings to people arriving in the wilds of Ohio and Indiana, Chapman made creating an orchard with at least 50 apple trees a lot easier.

And since there was no way to ensure water was safe to drink, having apples on hand meant having the ingredient needed to make hard cider, which was consumed by young and old alike. So Chapman not only helped settlers stake claims to new land, he helped them stay hydrated.

He got along with Native Americans

Not surprisingly, most Indians didn't take kindly to the people who were stealing their land, and there were many clashes between tribes and settlers. But even though Chapman's seedlings were being used to cement settler land claims, he was still able to maintain good relations with the Native Americans he encountered. Many appreciated Chapman's nature-friendly attitude, as well as the fact that he was able to speak some of their languages.

Native Americans also admired Chapman for his knowledge of medicinal plants. He understood how to derive treatments from natural ingredients such as mullein, motherwort, mayweed and pennyroyal. Along with apples, Chapman sowed the seeds for these plants during his travels.

He was a welcomed visitor

In addition to passing along news from other places he visited, Chapman made sure to share his Swedenborgian beliefs during any stay. He'd pull out religious tracts and invite his hosts to listen to "news right fresh from Heaven." In the Harper's article, one woman recalled that Chapman's voice had been "strong and loud as the roar of wind and waves, then soft and soothing as the balmy airs that quivered the morning-glory leaves about his gray beard."

He made American apples bloom

Apples are heterozygous, which means that when you plant the seeds from an apple, each resulting tree will bear fruit that differs from the source apple. If you want to replicate a tasty apple, you have to graft a branch from the source tree onto a seedling.

This was common knowledge in Chapman's day, but he didn't believe in grafting. (This may have been because the Church of Swedenborg made him wary of messing with nature — he was known to preach "God has made all things for good.") Instead, Chapman planted seeds that he'd gathered at cider mills. The resulting trees produced a variety of apples; though they were often inedible, they were perfectly good for making cider.

However, as Michael Pollan explained in his 2001 book The Botany of Desire, while many of these apples were awful, others had qualities that enabled them to flourish in American soil. For giving American apples a chance to take root, Chapman truly deserves to be remembered as Johnny Appleseed.