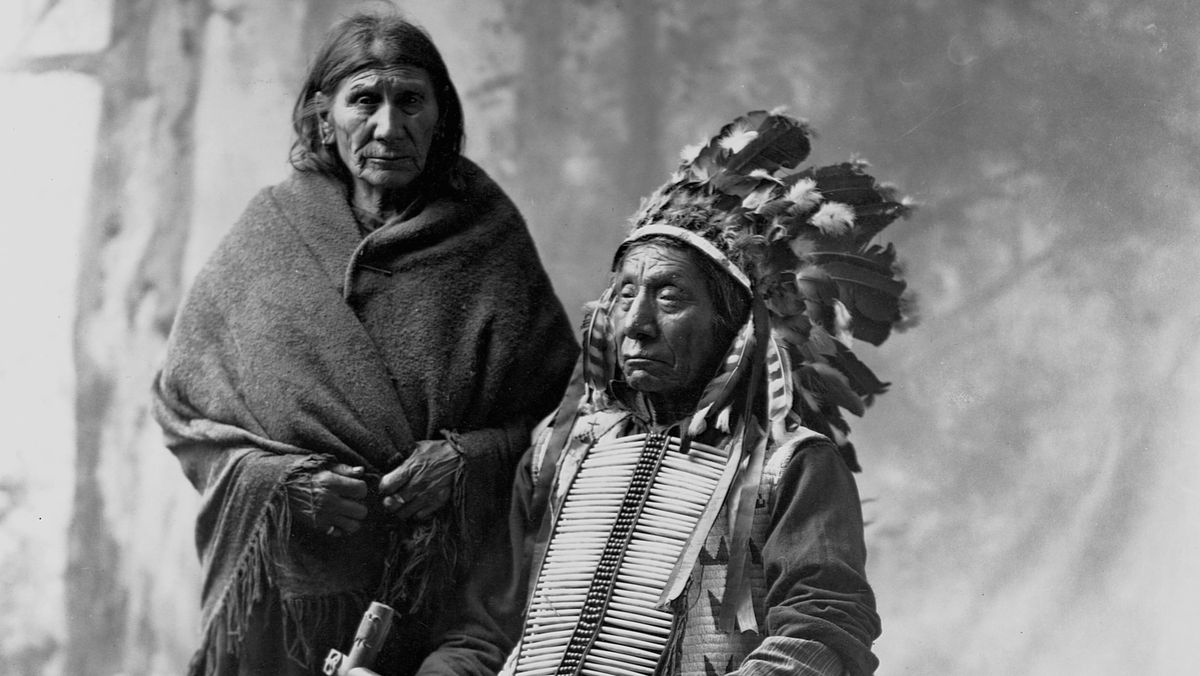 While our Founding Fathers, presidents and military leaders are remembered as heroes of American culture, it's often overlooked how indigenous people contributed to many of the major events in the nation's history. Here are a dozen Native Americans who left a lasting mark with their leadership, bravery and innovations: 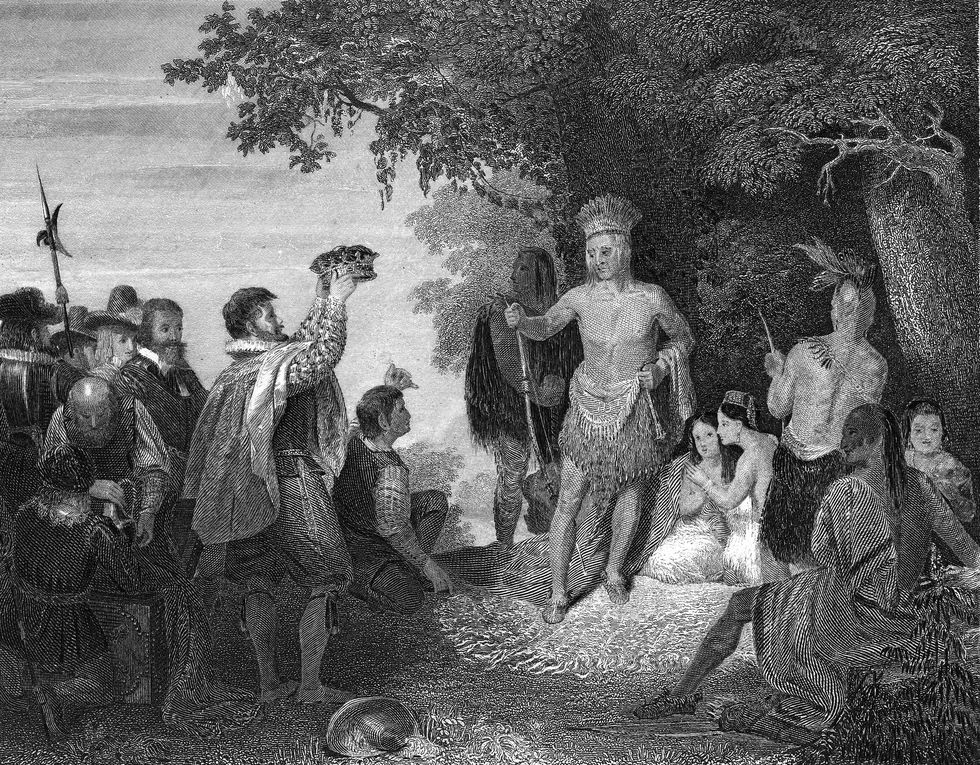 Also known by his proper name of Wahunsenacawh, Powhatan is perhaps best remembered as the father of Pocahontas, a woman (also called Matoaka) known for her role in English colonial settlement at Jamestown, Virginia in the early 1600s. He was also a massively powerful chief at the time, his authority extending over 30 tribes and some 15,000 Algonquian-speaking people of the coastal Virginia area. Powhatan had a mixed relationship with the newcomers, his early assistance giving way to open warfare as they battled for control over the territory, though their relations were largely peaceful by the time of his death in 1618.

As with Powhatan, little is known of Tamanend's life beyond his encounters with 17th century English settlers, specifically the 1682/3 Treaty of Shackamaxon allegedly forged between his Lenni-Lenape Native Americans and William Penn in modern-day Philadelphia. However, the wisdom and generosity showed by the "Affable One" endured for generations, with colonists celebrating him as the "Patron Saint of America" in the years around the Revolutionary War. The legendary chief also sparked the formation of numerous social groups in his honor, including the infamous "Tammany Hall" organization that dominated New York City politics for more than 150 years.

Introduced to colonial culture at an early age, Joseph Brant fought for the British in the French and Indian War, converted to Christianity and served as a missionary among the Iroquois people. But the warrior and scholar also known as Thayendanegea remained fiercely loyal to his Mohawk roots, and he rallied four of the six Iroquois nations to the side of what he felt was the more protective British Empire in the American Revolution. Brant fought with distinction in several major skirmishes in the New York area, rising to the rank of captain, though he faced a continuous uphill battle in its aftermath as he sought to broker peace and prosperity for his people.

A silversmith and artist who was also known as George Gist or Guess, Sequoyah made his greatest contribution to indigenous culture with his formation of the Cherokee syllabary. His work, reportedly fine-tuned over the course of 12 years, produced a collection of 85 symbols to match the sounds of his traditional language. But it caught on at a greater speed after its formal adoption by the Cherokee Nation in 1825, thanks to the launch of the bilingual Cherokee Phoenix and Sequoyah's efforts to foster mass literacy. His syllabary remains in use today, while his name lives on through the ancient trees that tower over the Northwest.

The son of a Shawnee chief, Tecumseh became one of the most revered leaders of his time through his unyielding resistance to American intrusion. The full scope of his powers was on display in the early 1800s when he teamed with his brother Tenskwatawa to found the Prophetstown settlement in Indiana Territory and rallied considerable support for a pan-Indian alliance. Although William Henry Harrison's forces destroyed Prophetstown and eventually killed Tecumseh, Harrison co-opted the chief's legacy for his run to the White House in 1840, while General William Tecumseh Sherman revived his namesake's memory with his own military successes during and after the Civil War.

A Lemhi Shoshone Native American who was abducted by an enemy tribe and found herself married to a French Canadian trapper, Sacagawea stepped into the limelight when she joined the Lewis and Clark expedition, baby boy in tow, in April 1805. Along with serving as a translator for negotiations with the Shoshones, the teenage mother contributed to the mission's success with her knowledge of vegetation and geographical checkpoints, enduring illness and the elements until returning to her South Dakota home in August 1806. Sacagawea soon slipped back into the shadows and died less than a decade later, though another version holds that she rejoined her people and lived to be nearly 100 years old.

READ MORE: How Sacagawea Served as an Invaluable Aid to Lewis and Clark

A prominent Oglala Lakota chief of the Great Plains region, Red Cloud honed his fighting chops through early skirmishes with the Pawnee and Crow tribes, before turning his focus to overreaching white settlers in the second half of the 19th century. He ignited what became known as Red Cloud's War, which included an overwhelming victory over American forces at the Fetterman Massacre of December 1866. However, Red Cloud largely abandoned the call to battle after signing the 1868 Treaty of Fort Laramie, even after the U.S. overran territorial boundaries the following decade, and he spent his remaining years pushing for gains through peaceful means.

While Sitting Bull fought alongside Red Cloud in the 1860s, he diverged from the former over his refusal to commit his Hunkpapa Lakotas to the terms of a treaty. As a result, he became a central figure in the Great Sioux War of 1876, his vision of a military triumph presaging the historic defeat of General George Custer at the Battle of the Little Bighorn. After surrendering in 1881, Sitting Bull briefly leveraged his celebrity as a member of Buffalo Bill's Wild West Show, but he never fully overcame his renegade urges and was killed after resisting arrest at the Standing Rock Reservation in 1890.

Often mentioned in the same breath as Red Cloud and Sitting Bull, Crazy Horse featured prominently at the Fetterman Massacre and led the charge at the Battle of the Little Bighorn. But the Oglala Lakota warrior stands on his own as a figure of mythical proportions, from his legendary fighting prowess to his refusal to be photographed during his lifetime. His own life was relatively short, as he was killed shortly after surrendering in 1877 for attempting to help his sick wife with her parents, but his outsized memory lives on through the ongoing construction of an enormous monument in his honor in South Dakota.

A shaman of the Chiricahua Apaches, Geronimo spent much of his life fighting off the Mexicans, Americans and competing tribes who sought control of modern-day Arizona and New Mexico. He was largely successful in those endeavors, his reputation bolstered by alleged mystical abilities to slow time and stop flying bullets. It took the efforts of 5,000 U.S. troops – one-quarter of the standing Army – and another 3,000 Mexicans to force Geronimo and his followers out of hiding in September 1886, making him the last Native American leader to surrender to the military.

In contrast with contemporaries who became famous for defending their lands, Chief Joseph is remembered for a valiant effort to lead his Nez Perce Native Americans out of harm's way. The retreat came after years of resisting attempts to relocate to a small Idaho reservation, a deadly skirmish forcing his band of 700 people on the run from their Wallowa Valley home. They nearly made it to safety in Canada amid the pressure applied by 2,000 U.S. troops, until Joseph delivered a memorable speech of surrender in October 1877. Although the "Red Napoleon" earned the respect of American military leaders, his hope of being allowed to return to the Northwest never came to fruition.

The narrative of the Native American quest for survival continues past the forced relocations and bloodshed of the 19th century, its latter chapters filled with stories like those of Wilma Mankiller. Named the first female chief of the Cherokee Nation in 1985, Mankiller spearheaded an array of health and education initiatives and is credited with boosting tribal membership and revenues by nearly 200 percent during her 10 years in charge. She also helped establish the federal Office of Tribal Justice, authored two books and taught at Dartmouth College, her lifelong commitment to activism rewarded with the Presidential Medal of Freedom in 1998.