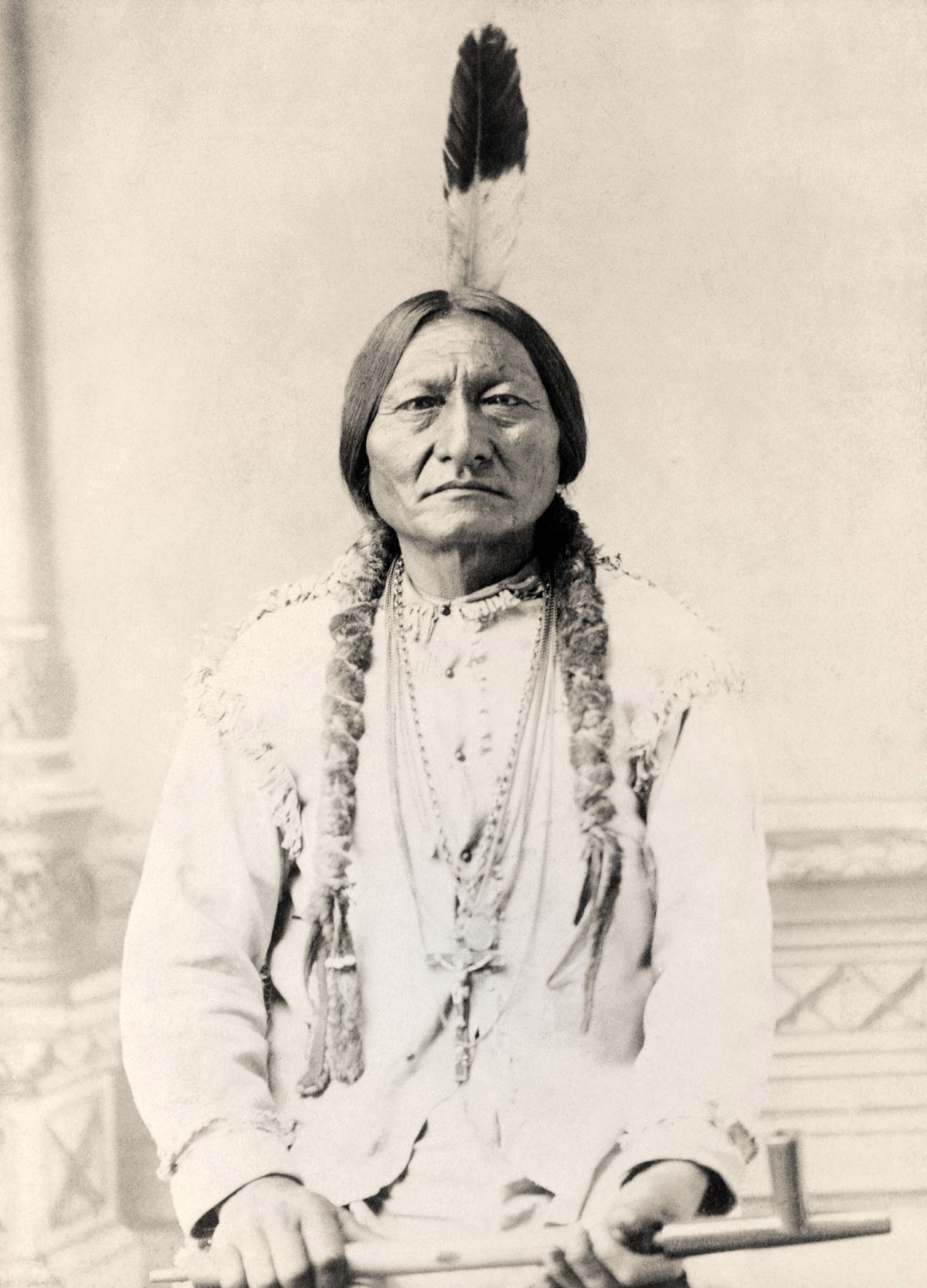 Who Was Sitting Bull?

Sitting Bull joined his first war party at 14 and soon gained a reputation for bravery in battle. In 1868, the Sioux accepted peace with the U.S. government, but when gold was discovered in the Black Hills in the mid-1870s, a rush of white prospectors invaded Sioux lands. Sitting Bull responded but could only win battles, not the war. He was arrested and killed in 1890.

Arguably the most powerful and perhaps famous of all Native American chiefs, Sitting Bull was born in 1831 in what is now called South Dakota. The son of an esteemed Sioux warrior named Returns-Again, Sitting Bull looked up to his father and desired to follow in his footsteps, but didn't show a particular talent for warfare. As a result, he was called "Slow" for his apparent lack of skills.

At the age of 10, however, he killed his first buffalo. Four years later, he fought honorably in a battle against a rival clan. He was named Tatanka-Iyotanka, a Lakota name that describes a buffalo bull sitting on its haunches.

Much of Sitting Bull's life was shaped by the struggles against an expanding American nation. When Sitting Bull was young he was chosen as leader of the Strong Heart Society. In June 1863, he took up arms against the United States for the first time. He fought American soldiers again the following year at the Battle of Killdeer Mountain.

In 1865, he led an attack on the newly built Fort Rice in what is now called North Dakota. His skills as a warrior and the respect he'd earned as a leader of his people led him to become chief of the Lakota nation in 1868.

Defender of His People

Confrontation with American soldiers escalated in the mid-1870s after gold was discovered in the Black Hills, a sacred area to Native Americans that the American government had recognized as their land following the 1868 Fort Laramie Treaty.

As white prospectors rushed into the Sioux lands, the American government tabled the treaty and declared war on any native tribes that prevented it from taking over the land. When Sitting Bull refused to abide by these new conditions, the stage was set for confrontation.

Sitting Bull's defense of his land was rooted both in the history of his culture and in the fate he believed awaited his people. At a Sun Dance ceremony on the Little Bighorn River, where a large community of Native Americans had established a village, Sitting Bull danced for 36 consecutive hours, slashed his arms as a sign of sacrifice and deprived himself of drinking water. At the end of this spiritual ceremony, he informed villagers that he had received a vision in which the American army was defeated.

In June 1876, just a few days later, the chief led a successful battle against American forces in the Battle of the Rosebud. A week later, he was engaged in battle again, this time against General George Armstrong Custer in the now famous Battle at Little Bighorn, known as the Battle of the Greasy Grass to the Lakota. There, Sitting Bull led thousands of Sioux and Cheyenne warriors against Custer's undermanned force, wiping out the American general and his 200-plus men.

For the U.S. government, the defeat was an embarrassment, and the Army doubled down its efforts to wrest control of the territory from Native American tribes. To escape its wrath, Sitting Bull led his people into Canada, where they remained for four years.

In 1881, Sitting Bull returned to the Dakota territory, where he was held prisoner until 1883. In 1885, after befriending Annie Oakley, he joined Buffalo Bill Cody's Wild West Show.

The pay was more than good—$50 a week to ride once around the arena—but Sitting Bull quickly grew tired of the performances and life on the road. He was shocked by the poverty he saw in the cities, and coupled with the hatred that was directed toward him by some of the show's audience members, Sitting Bull decided to return to his people. "[I] would rather die an Indian than live a white man," he famously said.

Back home, in a cabin on the Grand River not far from where he'd been born, Sitting Bull lived his life without compromise. He rejected Christianity and continued to honor his people's way of life.

In 1889, Native Americans began to take up the Ghost Dance, a ceremony aimed at ridding the land of white people and restore the Native American way of life. Sitting Bull soon joined it.

Fearing the powerful chief's influence on the movement, authorities directed a group of Lakota police officers to arrest Sitting Bull. On December 15, 1890, they entered his home. After they dragged Sitting Bull out of his cabin, a gunfight followed and the chief was shot in the head and killed. He was laid to rest at Fort Yates in North Dakota. In 1953, his remains were moved to Mobridge, South Dakota, where they remain today.