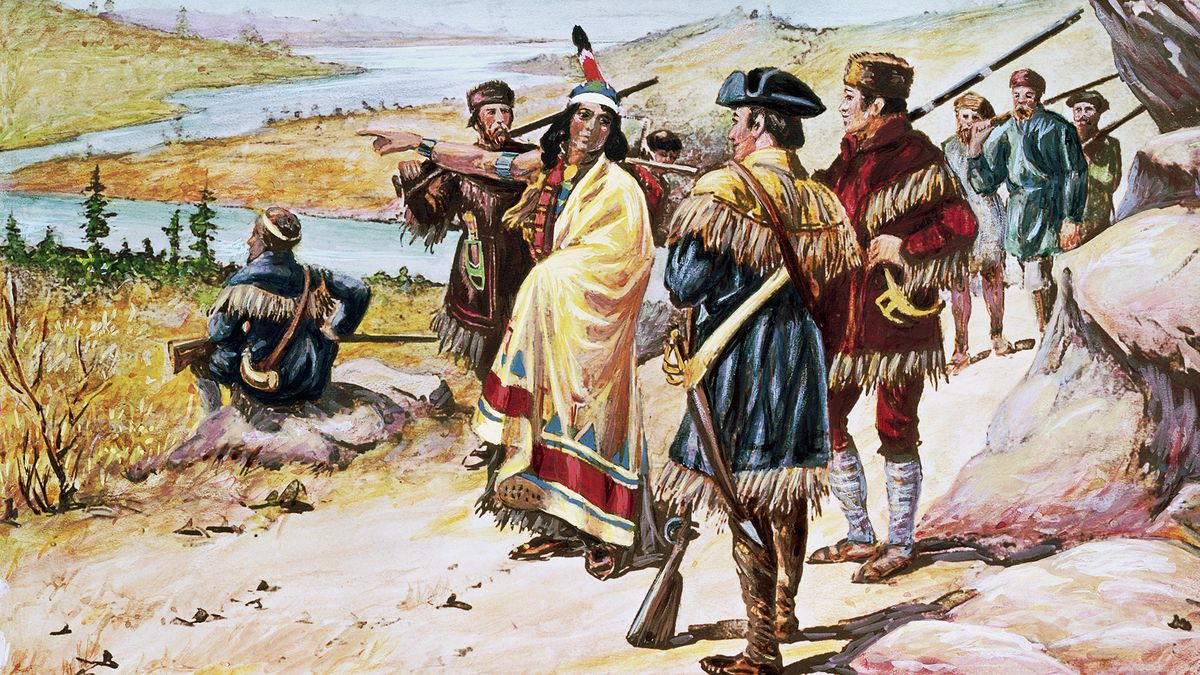 It was the greatest explorative expedition the young United States of America had ever known. On May 14, 1804, co-commanders Meriwether Lewis and William Clark set out from Camp Dubois, outside of St. Louis, Missouri, with a group of hearty, eager explorers. Dubbed the “Corps of Discovery” by President Thomas Jefferson, the expedition, over the next two years, would travel over 8,000 miles into the wilds of the Pacific Northwest and back. Along the way it would chart the course of Manifest Destiny, transforming the continent of North America forever.

On July 4, 1803, Jefferson announced that the United States had bought the vast western territory of Louisiana – over 825,000 square miles of land, mostly inhabited by Native Americans – from the French. The problem? Most of the land had never been seen by a citizen of the United States of America.

To remedy this situation, the same day President Jefferson announced the Louisiana Purchase, he also authorized Lewis to lead an exploration of the new land. According to Stephen E. Ambrose, author of Undaunted Courage: Meriwether Lewis, Thomas Jefferson, and the Opening of the American West, Lewis instantly knew who he wanted to lead the journey with him: Clark, who he had known in the U.S. military.

Lewis and Clark had similar backgrounds but different personalities

The two men shared a similar background, but very different temperaments. Born to a landed family in Albemarle County, Virginia in 1774, Lewis served as personal assistant to President Jefferson, who had long recognized the young man’s sensitivity, brilliance and observant nature. But Lewis also suffered from some form of mental illness, which could lead to long stretches of melancholy and despair.

Luckily, his chosen co-commander, Clark, was a natural leader, with a strong, steady temperament that rarely faltered. Born in 1770 in Virginia, Clark had spent most of his life in the wilds of Kentucky before joining the Army and later running his family plantation. The two men would present a united front on their adventure West, complementing each other remarkably well.

As the Corps of Discovery set off from Camp River Dubois, their charge from President Jefferson was clear. “The aim of your expedition is to explore the Missouri River and those of its principal tributaries that, by their course and by linking with the Pacific Ocean, may offer the most direct and practical fluvial communications across this country to commercial ends," the President wrote.

By November 1804, the Corps had made its way to North Dakota, where its core of 33 adventurers was cemented. The group included two invaluable members who America had not treated kindly – York, a Black man owned by Clark, and a 16-year old pregnant Lemhi-Shoshone called Sacagawea, who had been forced into marriage after being purchased by a French-Canadian trapper named Toussaint Charbonneau. He would also join the expedition. The Corps were soon joined by Sacagawea’s baby, Jean Baptiste Charbonneau, who the doting Clark called “Pomp.”

Despite hardships, danger and the constant threat of the unknown, positivity would reign throughout most of the expedition. “I can foresee no material or probable obstruction to our progress, and entertain therefore the most sanguine hopes of complete success,” Lewis wrote in 1805. “At this moment, every individual of the party are in good health, and excellent sperits; zealously attatched to the enterprise, and anxious to proceed… all in unison, act with the most perfect harmoney. With such men I have everything to hope, and but little to fear.” 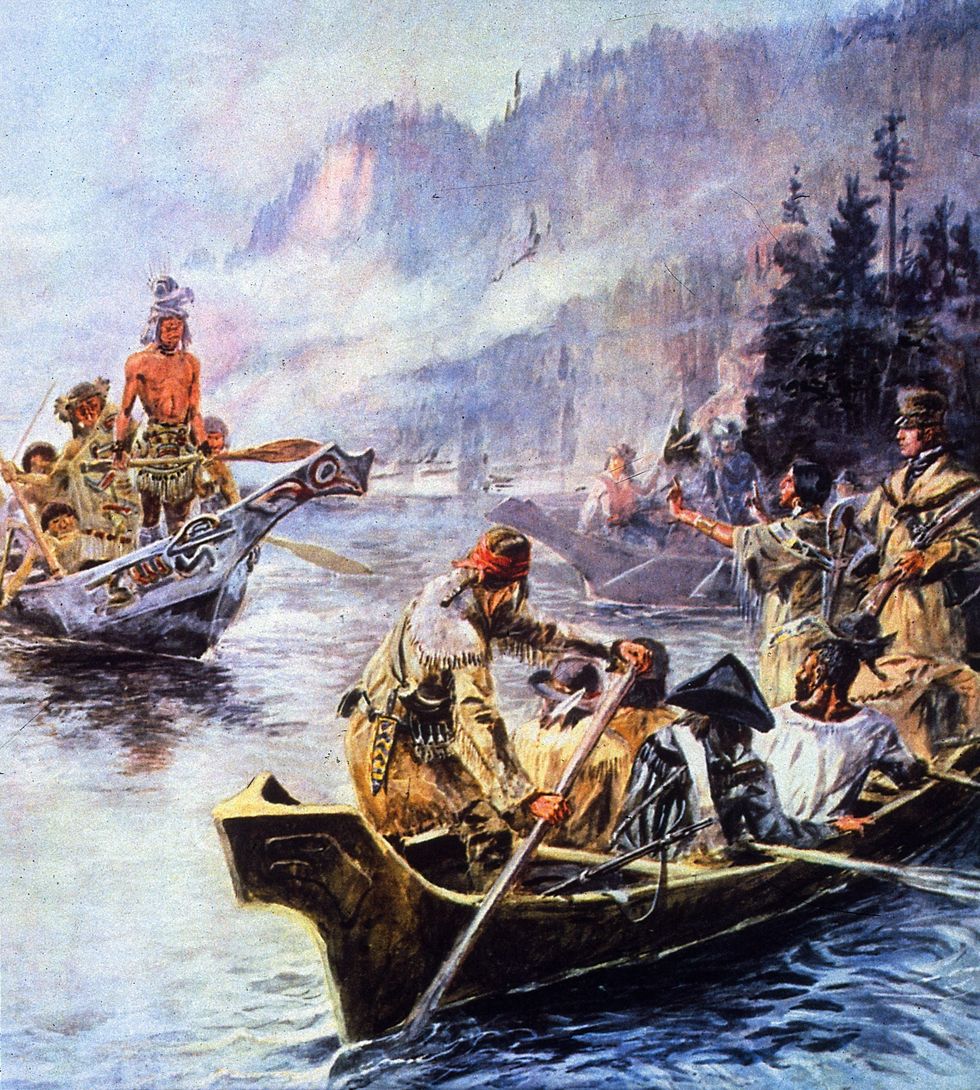 A painting of Sacajawea acting as the Lewis and Clark’s guide across the Rocky Mountains in Oregon Country.
Photo: MPI/Getty Images

The Corps' goal was to create friendly relationships with Native people, which included Sacagawea

One of the main missions of the Corps was to establish a friendly, commerce-based relationship with the many Native people they would encounter on their journey. According to historian James Ronda, Lewis and Clark shared “a naive optimism typical of so much Euro-American frontier diplomacy. [They] believed they could easily reshape upper Missouri realities to fit their expectations... [But] to the surprise of the explorer-diplomats, virtually all Indian parties proved resistant to change and suspicious of American motives.”

Over the course of their journey, the Corps would encounter tribes including the Nez Perce, Mandans, Shoshones and Sioux. Many of these tribes would offer invaluable assistance in the form of directions, food and wisdom regarding the West. They would also introduce the Corps to traditions never seen by Americans, including the Sioux scalp dance. Clark described the scene:

A large fire made in the Center, about 10 musitions playing on tamberins made of hoops & skin…with Deer & Goats Hoofs tied So as to make a gingling noise and many others of a Similer kind, those men began to Sing & Beet on the Temboren, the women Came forward highly Deckerated in theire way, with the Scalps an Trofies of war…& proceeded to Dance the war Dance.

With the invaluable Sacagawea, who acted as a translator and guide, the men journeyed up the Missouri River into Montana. In June 1805, working with descriptions given them by Native Americans, they discovered the Great Falls of the Missouri, making them the first Americans to see them. Lewis described the awe-inspiring sight:

I had proceded on this course about two miles ... whin my ears were saluted with the agreeable sound of a fall of water and advancing a little further I saw the spray arrise above the plain like a collumn of smoke. ... [It] soon began to make a roaring too tremendious to be mistaken for any cause short of the great falls of the Missouri.

They reached the Pacific Ocean 18 months after the expedition began

After crossing the continental divide through the Lemhi Pass, at the present-day Montana-Idaho border, it became evident that there was no fabled all-water route to the Pacific that President Jefferson had hoped for. The Corps then started a difficult 200-mile trek over the Bitterroot Mountains (the northern segment of the Rocky Mountains) before taking the Clearwater, Snake and Columbia Rivers to what is now the coast of Oregon, where they beheld the Pacific Ocean for the first time in November 1805.

“Ocian in view! O! the joy,” Clark wrote. “Great joy in camp we are in view of the Ocian, this great Pacific Octean which we been So long anxious to See.”

The Corp set up camp, building Fort Clatsop near present-day Astoria, Oregon. Here, they spent the winter, while Lewis and Clark compiled reports describing all that they had learned and seen, which included intricate sketches made by Lewis of everything from the maple leaf to the vulture. According to the National Park Service:

These reports contained measurements and observations of its course and its surrounding flora, fauna, tributaries and inhabitants…Lewis and Clark described at least 178 plants and 122 animals - including mammals, birds, reptiles and fish …New species that the Corps of Discovery encountered included pronghorn, bighorn sheep… mountain beaver, long-tailed weasel, mountain goat, coyote and various species of rabbit, squirrel, fox and wolf… They sent back descriptions, zoological specimens, and even a few live animals. One of the animals sent to President Jefferson in 1805 was a "barking squirrel," or “black-tailed prairie dog.”

Lewis and Clark were hailed as heroes in America

In March 1806, the expedition began its journey back East. It was during this final leg of the expedition that the one violent skirmish – with the Blackfeet tribe at the Two Medicine Fight Site in Montana – occurred.

The Corps of Discovery returned to St. Louis on September 23, 1806. Lewis and Clark headed to Washington, D.C., to tell President Jefferson all they had seen. They were hailed as heroes – but this was from a purely American perspective. Intentionally or not, the Corp’s charting of the Pacific Northwest signaled the beginning of the end for the Native peoples of the West, who had lived in the area for thousands of years.

The expedition’s success should have signaled the beginning of illustrious careers for both Lewis and Clark. However, fate had other plans. Post-expedition life proved difficult for the fragile Lewis, who was named Governor of the Louisiana Territory. He died by suicide (or murder?) at the Grinder’s Stand Inn, 70 miles outside of Nashville, on Oct. 11, 1809.

Clark would prosper, serving as both Governor of the Missouri Territory and Superintendent of Indian Affairs. He also sponsored the education of Sacagawea’s son, who would become a legendary world traveler, mayor, fur trader, military scout and gold miner. Clark died in St. Louis in 1838.