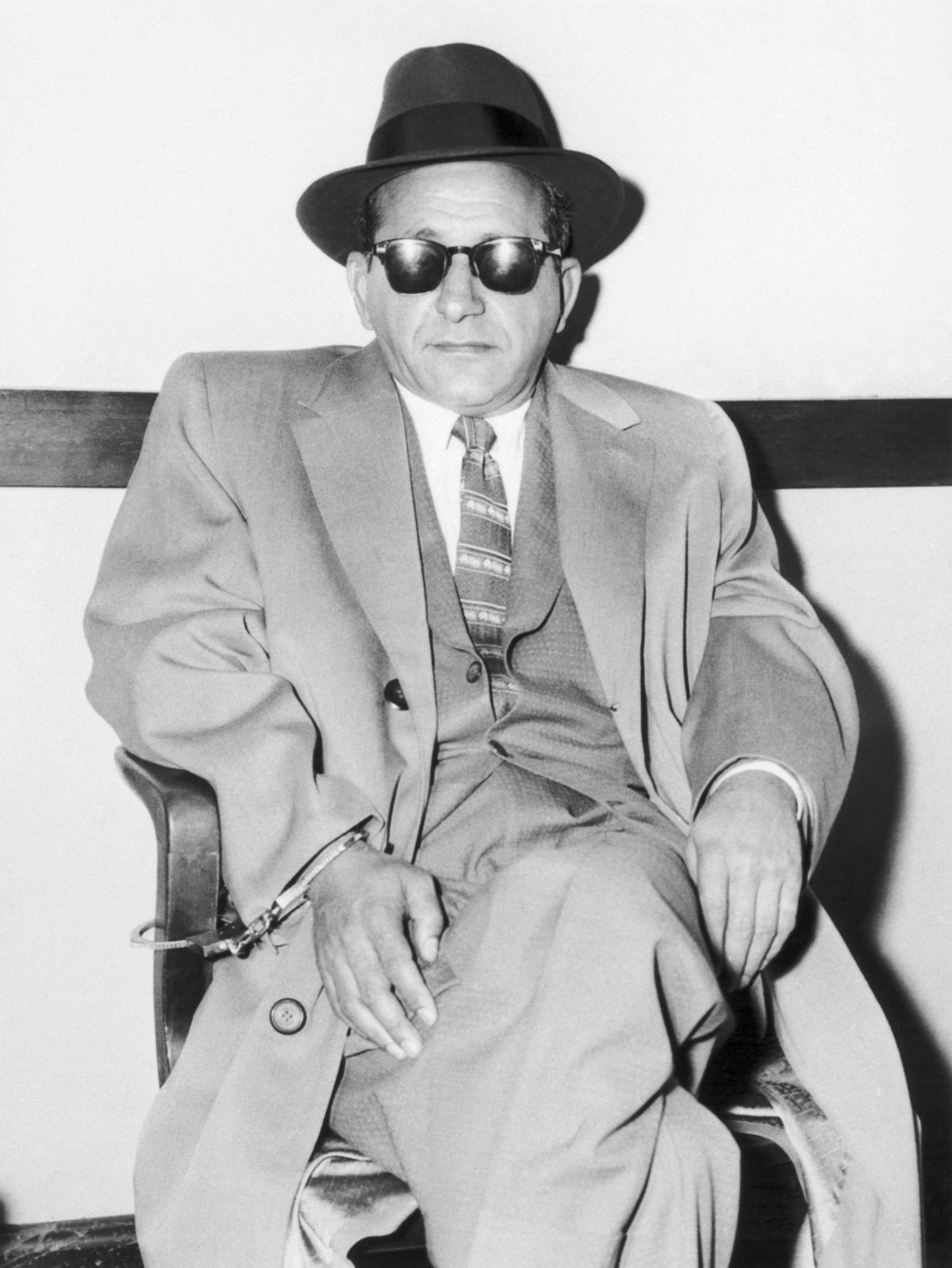 Who Was Sam Giancana?

Sam Giancana started out as a wheelman for Al Capone and worked his way to the top of Chicago's illegal gambling operations. He had many ties with politicians, including the Kennedys, and was called to testify regarding Mafia involvement in a CIA plot to assassinate Castro. Giancana himself was killed before giving testimony.

Sam Giancana was born Gilormo Giancana, on June 15 (some sources say May 24), 1908, in Chicago, Illinois. Baptized Momo Salvatore Giancana and known as Sam, he grew up in a rough neighborhood on the West Side of Chicago, as the son of Sicilian immigrants. As a teenager, Giancana led a street gang called "The 42s," who carried out low-level tasks for members of the powerful Chicago Mafia of the 1920s, led by the notorious gangster Al Capone. Giancana got a job as a "wheelman," or driver, in the Capone organization, and was arrested for the first time in 1925, for auto theft. He soon graduated to "triggerman," and by the age of 20 had been the prime subject in three murder investigations, but was never tried.

In 1933, Giancana married Angeline DeTolve; the couple had three daughters. (Their daughter Antoinette published a memoir, Mafia Princess, in 1984.) Giancana climbed the mob ranks throughout the rest of the decade, as the leadership in Chicago changed with the jailing of Capone in 1931 (he died in 1947). He first served prison time starting in 1939, for illegally manufacturing whiskey.

After his release in the early 1940s, Giancana set out to take over Chicago's illegal lottery gambling operations, particularly those in the city's predominantly African-American neighborhood. Through a brutal string of events, including beatings, kidnappings, and murder, he and his associates won control of the numbers racket, increasing the Chicago Mob's annual income by millions of dollars.

A psychologist who interviewed Giancana during his Selective Service physical examination during World War II classified the gangster as a "constitutional psychopath" who showed "strong antisocial trends." As a result, Giancana received 4-F status and was disqualified from military service. He profited from the war on the homefront, making a fortune manufacturing counterfeit ration stamps. By the end of the war, the Giancana family had moved from the city to a house in the affluent Chicago suburb of Oak Park.

When Anthony "Tough Tony" Accardo stepped down as the head of the Chicago Outfit (as the city's branch of the Mafia was known) in the mid-1950s, Giancana ascended to the top spot. By 1955 he controlled the gambling and prostitution operations, narcotics trafficking, and other illegal industries in his hometown. Under his leadership, the Chicago Mafia grew from a relatively small-scale racket to a full-fledged criminal organization. He later told an agent for the Federal Bureau of Investigation (FBI) that he "owned" not only Chicago, but Miami and Los Angeles as well.

In 1959, FBI agents planted a microphone in a room at the Armory Lounge in the suburb of Forest Park, which served as Giancana's headquarters. For the next six years, they were able to eavesdrop on the workings of the Mafia and gain knowledge of many criminal activities in Chicago and around the country. Though Giancana's reign as Chicago's preeminent crime boss was already heading towards its end by the close of the 1950s, his path in the 1960s would cross with two of America's most powerful men: Robert and John F. Kennedy.

Relationship with the Kennedys

After Angeline's death in 1954, Giancana became notorious for his flamboyant social life and frequent womanizing. He was a friend of the singer and actor Frank Sinatra and reportedly used Sinatra as a mediator with Attorney General Robert F. Kennedy, who was alienating the Mafia with his relentless campaign against organized crime in America. (The mediation was apparently unsuccessful, as Robert Kennedy persuaded FBI Director J. Edgar Hoover to place Giancana's home in Oak Park under 24-hour surveillance in 1963.)

Giancana's numerous lovers included Phyllis McGuire, of the McGuire Sisters singing group, and Judith Campbell Exner, an actress who would link Giancana to an even more powerful man: President John F. Kennedy, with whom Exner became involved when she was still seeing Giancana.

Giancana's various ties to JFK have long been the subject of speculation. Many historians believe that ballot stuffing in Chicago (then under the control of old-school Democrat Mayor Richard Daley) helped ensure Kennedy's election in 1960. Giancana himself reportedly claimed that he had helped run a vote-stealing scam in Cook County, Illinois, a district that had been the deciding factor in Kennedy's victory. On the other hand, there are also persistent rumors of Mafia involvement in JFK's 1963 assassination, perhaps as revenge for what they saw as the ingratitude of the Kennedys in the form of RFK's crusade against organized crime.

Whatever Giancana's specific link to JFK was, the two men had a nemesis in common: Fidel Castro, whom Mob leaders hated because he had taken over Cuba, with its extensive gambling rackets. The Kennedy Administration, obviously, viewed Castro's Communist regime as a threat to national security, as evidenced by the infamous Bay of Pigs invasion in April 1961. The tie between Giancana and Kennedy would again be the subject of speculation when information later surfaced that the Mafia and the Central Intelligence Agency (CIA) had joined forces sometime in the 1960s to plot Castro's assassination.

In 1965 Giancana was put on trial for refusing to testify before a Chicago grand jury investigating organized crime. He was sentenced to one year in jail. Upon his release, Giancana traveled to Mexico, where he lived in self-imposed exile until 1974. He was extradited that year by the Mexican authorities to testify before another grand jury. He was granted immunity from federal prosecution and appeared before that jury four times, but provided little information of use.

Giancana was next called to testify before a United States Senate committee investigating Mafia involvement in a failed CIA plot to assassinate Castro. Before he was scheduled to testify, Giancana flew to Houston, Texas, and underwent gall bladder surgery. He returned to his Oak Park home on June 17, 1975. Two days later, Giancana was shot once in the back of the head and several more times up through the chin with a .22-caliber pistol while cooking in his basement. Though theories abounded as to who killed him (rival Mafiosi, CIA operatives nervous about his future testimony, one of many former girlfriends), no one was ever arrested in connection with the murder.

Among the various movies that have depicted Giancana are: Sugartime (1995), with John Turturro who plays the mobster, as well Power and Beauty (2002). The thriller King Kennedy (2012) also shows archival footage of Giancana.