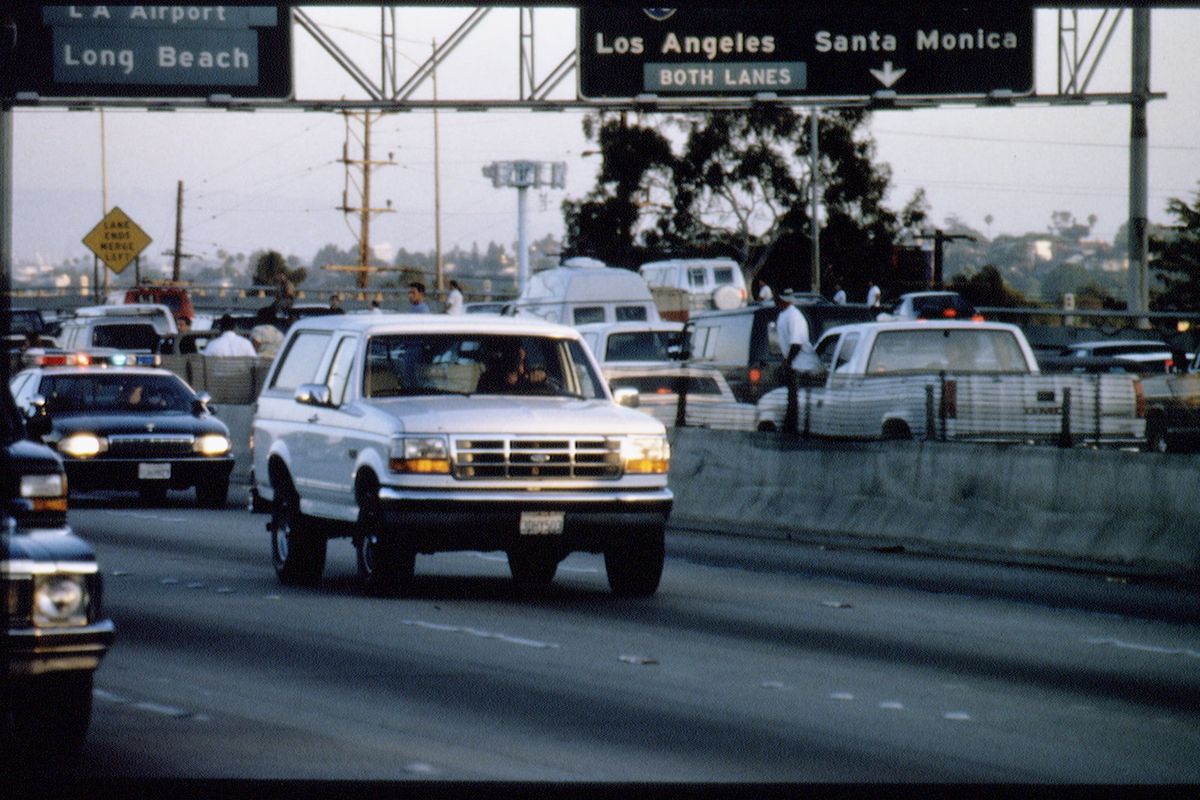 No need for speed: One of the most-watched live television events was also the slowest moving. On the evening of Friday, June 17, 1994, a white Ford Bronco with California plate 3DHY503 traveled down southern California’s freeways driven by former football player Al Cowlings. In the backseat: O.J. Simpson, the football legend known as “The Juice,” who reportedly had a gun to his own head.

Five days prior, his ex-wife Nicole Brown Simpson and her friend Ron Goldman had been murdered and Simpson became a suspect the next day. Initially compliant, he suddenly led police (and the world) on a 60-mile chase along the Santa Ana Freeway (5), Artesia Freeway (91) and San Diego Freeway (405), which began at 5:56 p.m. until he reached his Brentwood home at 7:57 p.m. and the surrender started, according to the L.A. Times.

With about 95 million viewers following the live chase, which even interrupted Game 5 of the NBA Finals between the New York Knicks and Houston Rockets, the 1993 white Ford Bronco became synonymous with the trial that followed, where Simpson was acquitted.

There were actually two Broncos involved in the case — Simpson’s own car, which was parked outside his Rockingham estate with traces of the victims’ blood (this car has since been destroyed), and Cowlings’ vehicle, which went on the low-speed chase. (Ironically, Simpson was a spokesperson for Ford from 1975 until the day of the chase.) 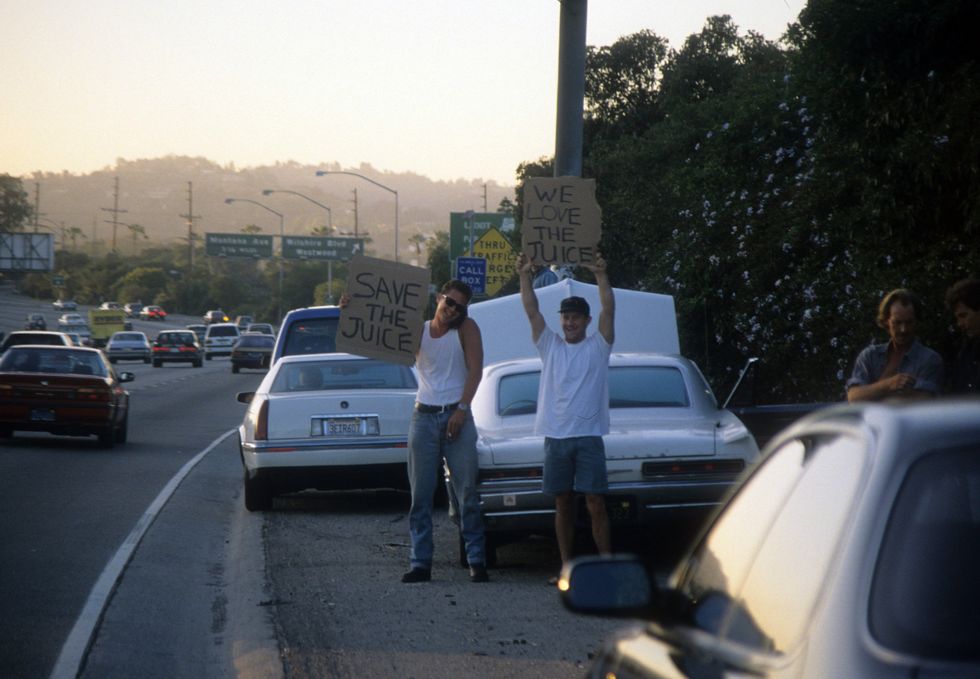 Fans on the side of the street cheering O.J. Simpson on during the Bronco chase.
Photo: Vinnie Zuffante/Archive Photos/Getty Images

After its two hours in the spotlight, the chase vehicle was sold by Cowlings to a company called Starifacts for $75,000 (not bad for a car worth $1,800 according to Kelley Blue Book). But Simpson’s former agent Mike Gilbert intervened when he discovered the company’s intention. “We found out that the company was going to rent the vehicle to a company in L.A. called Grave Line Tours, that visited famous graves," Gilbert told ESPN. "They were going to re-enact the chase with the Bronco and then take people to Nicole's grave. The trial hadn't taken place yet, and we didn't want people thinking anyone associated with O.J. did this."

Instead, Gilbert and two of Cowlings’ friends gave Cowlings $75,000 for the car — and for years the infamous Bronco simply sat in a condo’s apartment garage. They ensured it kept running by constantly changing the battery and taking it out for a drive every other year. But even so, there were only 20 more miles put on the odometer since the chase.

In 2012, the owners received an offer from Las Vegas’ Luxor Hotel — and it was on display in front of the hotel as part of a sports memorabilia exhibit (which also included the 1999 Women’s World Cup trophy). But when they wanted to move the car inside the hotel, which would have required disassembling it, the owners said no since they wanted to ensure the car was “still in running condition,” according to the same ESPN story.

The original gas was removed from the vehicle

While the famous wheels also had a short stint in Greenwich, Connecticut, at the Brant Foundation Arts Center and was on a 2017 episode of Pawn Stars, it’s now on loan for a display at the Alcatraz East Crime Museum in Pigeon Forge, Tennessee. Also on display there: a temporary exhibit honoring Nicole Brown Simpson, which sheds light on domestic abuse.

And as for the original gas that was in the vehicle? Gilbert took it out of the vehicle and still has it, along with the original tires and vehicle registration papers, as he told ESPN.

Meanwhile, Simpson, who was released from prison in October 2017, is enjoying life outside Las Vegas — and even joined Twitter in June 2019 with a debut video saying he was looking forward to letting followers “read all my thoughts and opinions on just about everything” and ending it: “This should be a lot of fun. I’ve got a little getting even to do.”

One of his first posts to “set the record straight,” included addressing the rumors about him being romantically linked to Kris Jenner — and specifically stating that Khloe Kardashian is not his daughter.