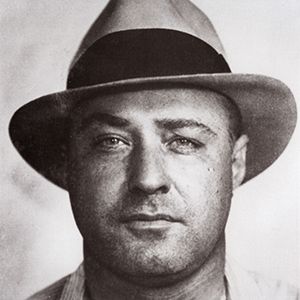 Who Was Machine Gun Kelly?

Machine Gun Kelly was a bootlegger, small-time bank robber and kidnapper who ranged through Tennessee, Mississippi, Texas, Oklahoma and New Mexico in the 1920s and 1930s. Beginning his criminal career as a bootlegger, he was caught in 1927 and subsequently spent a few months in jail, where he met bank robbers. In 1930, he married Kathryn Thorne. They, along with others, robbed banks in many states, and kidnapped a wealthy oil tycoon and held him for ransom. For that crime, Kelly was arrested and sentenced to life in prison in 1933. He died in 1954.

Bootlegger, bank robber and kidnapper Machine Gun Kelly was born George Kelly Barnes on July 18, 1895, in Memphis, Tennessee. (Some sources state that he was born in 1897. A book by one of his sons stated that he was born in Chicago in 1900.) Despite the nickname "Machine Gun," Kelly was a relatively minor criminal until a 1933 kidnapping made him infamous. Before beginning his life of crime, he was a student at Mississippi A&M College. He married Geneva Ramsey when he was 19. The couple had two sons together before divorcing. His first wife told The New York Times after his arrest that she divorced him because he was "running in bad company."

Involved in bootlegging as a teenager, Kelly returned to the profitable illegal enterprise after several failed attempts at legitimate work. He was caught selling illegal liquor in 1927 and spent a few months in jail in New Mexico. Nabbed again, this time for selling liquor on an Indian reservation, Kelly did time at Leavenworth Prison in Kansas. While incarcerated, he made friends with several bank robbers, including Charlie Harmon, Frank Nash, Francis Keating and Thomas Holden, and is believed to have helped Keating and Holden escape.

After his release from prison in 1930, Kelly traveled to St. Paul, Minnesota, with his girlfriend Kathryn Thorne. (The two later married in the fall of that year.) There, he reunited with Keating and Holden and participated in a bank hold-up with the pair. Continuing his crime spree, Kelly was involved in bank robberies in several states, including Iowa, Texas and Washington. According to legend, Kelly's wife helped build his reputation, buying him a machine gun and nicknaming him after the weapon. She also reportedly gave away shell casings from his exploits to people as souvenirs to increase his notoriety.

Along with bank robbing, Kelly made several attempts at kidnapping. With his wife and longtime associate Albert L. Bates, Kelly hatched a plan to kidnap wealthy Oklahoma oil man Charles F. Urschel. On July 22, Bates and Kelly entered the Urschel's Oklahoma City home and abducted Urschel and one of his friends, Walter R. Jarrett, leaving their wives behind. Jarrett was soon let go, but Urschel was held for ransom. Kelly and his gang wanted $200,000 for the oil man.

They set up an elaborate system for the handling of their captive and the delivery of the ransom. But they didn’t count on Urschel’s sharp mind and the authorities keeping track of the ransom money’s serial numbers. The ransom was delivered on July 30 in Kansas City and Urschel was released the next day. He was unharmed and, although blindfolded some of the time, he was able to provide a number of clues to authorities. From Urschel’s descriptions of what he heard and saw while being held hostage, the authorities were able to figure out that he must have been near Paradise, Texas. Earlier there also had been a tip that the Kellys were involved.

Kathryn Kelly's mother, Ora Shannon, lived on a ranch near Paradise. The place was raided and several suspects, including Shannon, her husband and his son, were arrested on August 12. Bates was caught that same day in Denver, Colorado, on an unrelated charge, but he was found to have money from the kidnapping on him. But the Kellys eluded capture for several weeks. They were discovered in Memphis, Tennessee, and taken into custody on September 26, 1933. They were quickly tried and convicted; both were sentenced to life in prison on October 12.

The once-notorious Kelly was mocked in the news as "Pop Gun Kelly." He was sent to Alcatraz Prison in California, home to many hardened criminals, including Al Capone. In the 1950s, Kelly moved to Leavenworth, Kansas, where he died of heart failure on July 18, 1954.

Today, Kelly is remembered, along with the likes of Charles "Pretty Boy" Floyd, "Baby Face" Nelson, Bonnie Parker and Clyde Barrow, as one of the criminals that made up the Midwest crime wave of the early 1930s.