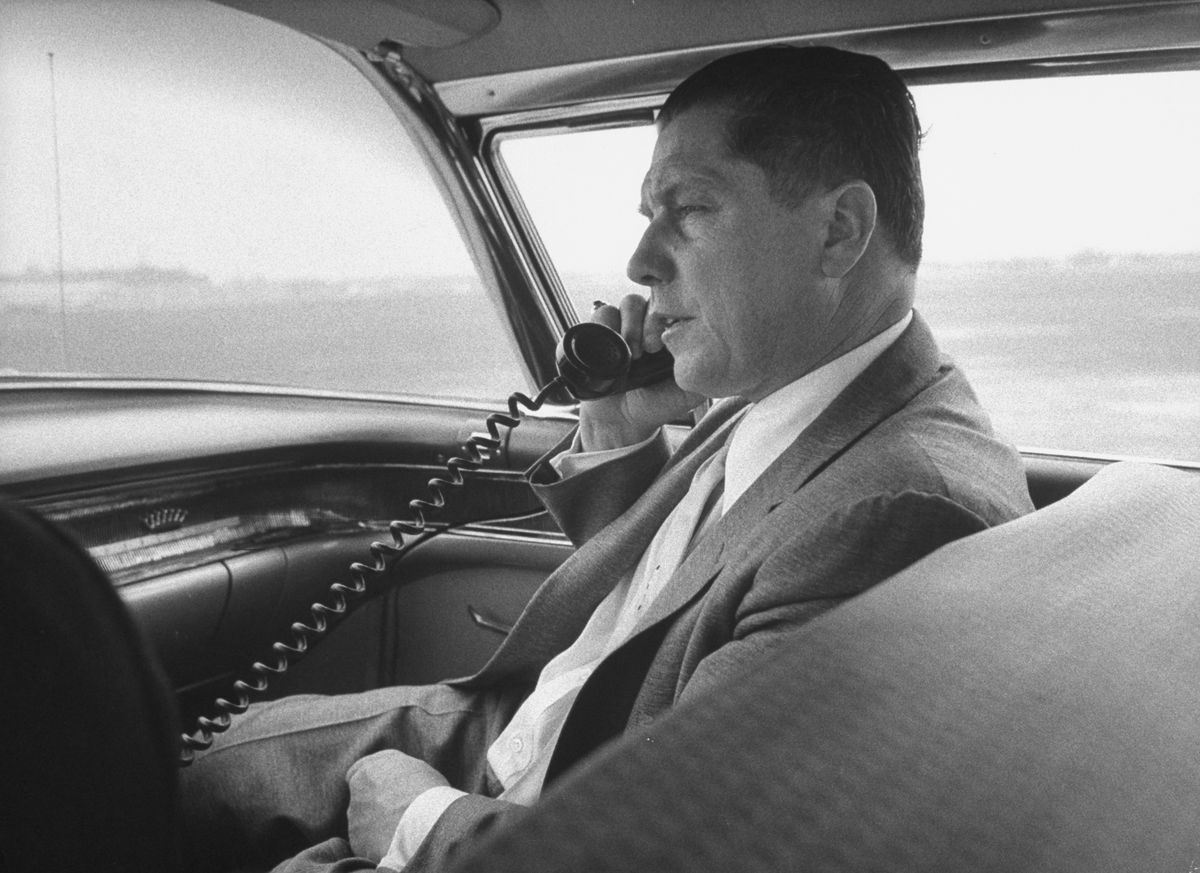 He was there to meet a couple of Mafia honchos — Anthony "Tony Jack" Giacalone, from Detroit, and New Jersey's Anthony "Tony Pro" Provenzano — reportedly with the aim of mending frayed relations with the latter.

At 2:15, Hoffa called his wife Josephine to complain he was being stood up, adding he would return home by 4 p.m. to grill steaks for dinner.

But Hoffa never made it back for dinner, and the following morning, his green Pontiac Grand Ville was found idle in the Machus Red Fox parking lot. With the filing of a missing-person report that evening, the case was formally opened on what would become one of the country's most famous unsolved mysteries.

Hoffa had been plotting his return to power when he vanished

Born in 1913 in Brazil, Indiana, James Riddle Hoffa received an early lesson about the hazards of unsafe working conditions when his coal-miner father died of lung cancer in 1920. He organized his first strike while working for Kroger grocery stores in Detroit in the early 1930s, and within a few years, he was transforming the Teamsters into the most powerful union in the country.

A hero to its rank-and-file members, Hoffa was a popular choice to take over as Teamsters president in 1957. However, he had forged close ties with organized crime bosses while charting his path to power, connections that drew the scrutiny of Washington lawmakers and eventual Attorney General Robert Kennedy. After being convicted of jury tampering, fraud and attempted bribery, the union leader began serving a 13-year prison sentence in 1967.

Hoffa, who passed his Teamsters presidency to Frank Fitzsimmons, received a presidential pardon from Richard Nixon in 1971, with the stipulation he was to steer clear of union activity until 1980. However, Hoffa had no intention of waiting that long, and he was exploring ways to regain his leadership at the time he abruptly vanished. 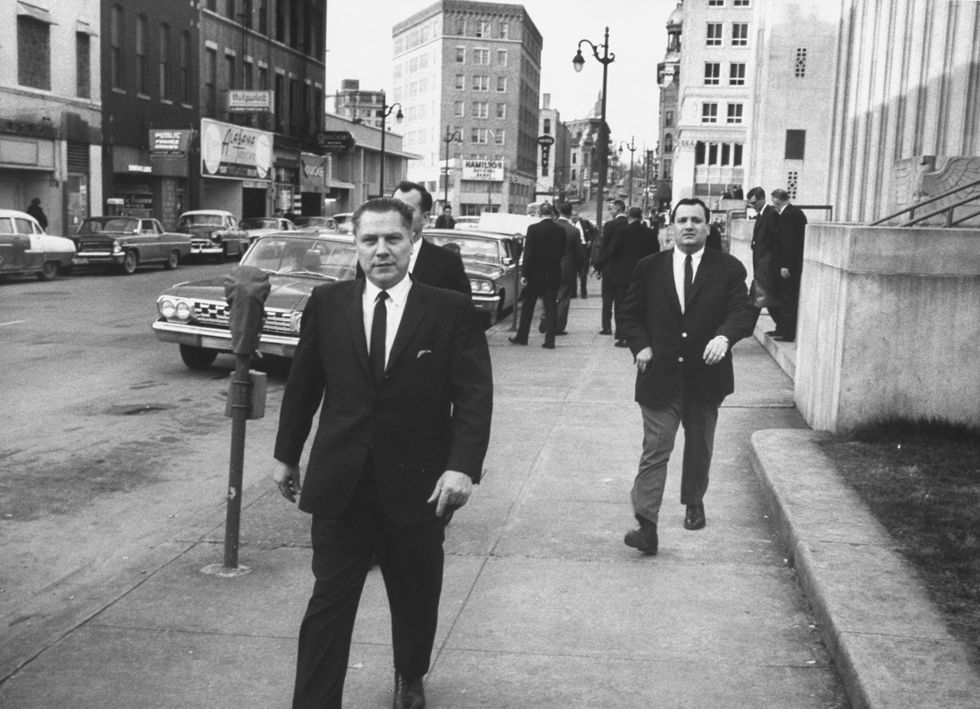 Jimmy Hoffa on the street outside a federal courthouse, where he is on trial for jury tampering
Photo: Robert W. Kelley/The LIFE Picture Collection via Getty Images/Getty Images

Three weeks after the search commenced, the FBI had a lead when police dogs discerned Hoffa's scent in the backseat of a Mercury Marquis Brougham. The car was owned by Joey Giacalone, son of Anthony Giacalone, and had been borrowed by Hoffa protégé Chuckie O'Brien, who denied any involvement in the case.

With the convening of a Detroit grand jury in September, a series of Teamsters officials and reputed mob associates were called to testify. However, none offered any substantial information, often invoking the Fifth Amendment in lieu of answers.

In early 1976, the FBI put out a report of its findings in what was known as the Hoffex Memo, the list of suspects including other tough-guy names like Vito "Billy Jack" Giacalone and Salvatore "Sally Bugs" Briguglio. Unfortunately, although investigators felt they were on the right path, they found no one willing or able to confirm that Hoffa's disappearance directly resulted from mob involvement.

In 1982, seven years after he was last seen outside the Machus Red Fox, Hoffa was declared legally dead.

A compelling confession emerged from 'The Irishman'

As the years progressed, numerous theories surfaced as to where Hoffa's remains could be found. In 1982, a Mob hitman named Charles Allen told a congressional committee that the union bigwig had been dismembered and left in the Florida Everglades. At the end of the decade, another hitman, Donald "Tony the Greek" Frankos suggested the enduringly popular notion that Hoffa was buried beneath Giants Stadium in East Rutherford, New Jersey.

Although the deaths of most chief suspects hampered further investigations, the cold case suddenly regained steam in 2001, when new DNA technology revealed that a hair found in the Mercury Marquis Brougham was a match for Hoffa. The matter was referred to the Oakland County Prosecutor's Office in Michigan, which returned the deflating news that there wasn't enough evidence to charge anyone.

Three years later, another door opened with the release of a book titled I Heard You Paint Houses (an alleged mob phrase used to gauge a person's willingness to kill someone else). Written by lawyer Charles Brandt, the book presented an intriguing account of the case by a recently deceased Mafia and Hoffa associate named Frank "The Irishman" Sheeran.

According to Sheeran, Hoffa had made people nervous by threatening to expose the behind-the-scenes Teamsters-mob dealings that had transpired while he was locked up. Ordered to kill Hoffa by the powerful and secretive Pennsylvania boss Russell Bufalino, Sheeran headed to the Machus Red Fox with O'Brien and Briguglio on that fateful day to tell Hoffa that the meeting spot had been moved. They drove to an empty house in northwest Detroit, where Sheeran pumped two shots into his once-trusted friend.

The confession prompted detectives to rip up the floorboards of the home fingered by Sheeran. They uncovered what appeared to be promising bloodstains, though lab analysis failed to match the samples to Hoffa.

Tips continued to pour in

Thus began an unfulfilling trend in which properties were ransacked in the hopes of finding more clues, if not the actual body of the missing man. A horse farm near Milford, a garage in Roseville, an empty lot in Oakland Township...all torn up to reveal nothing.

In another example of the "new evidence" that pops up every few years, in 2015 The New York Post reported on a claim that Hoffa had been buried in a 55-gallon drum at a toxic dump site in northeastern New Jersey. Naturally, the source of the info, mob and Teamsters insider Phillip "Brother" Moscato, had died the year before.

Meanwhile, Martin Scorsese 2019 movie The Irishman features a script adapted from I Heard You Paint Houses and a cast of the usual Hollywood wise guys, including Robert De Niro (as Sheeran), Al Pacino (Hoffa) and Joe Pesci (Bufalino).

A passion project of Scorsese's, the film took a long time to get off the ground. Chances are, with authorities no closer to cracking the case than they had been decades earlier, the director wasn't too worried about new developments spoiling his final product.