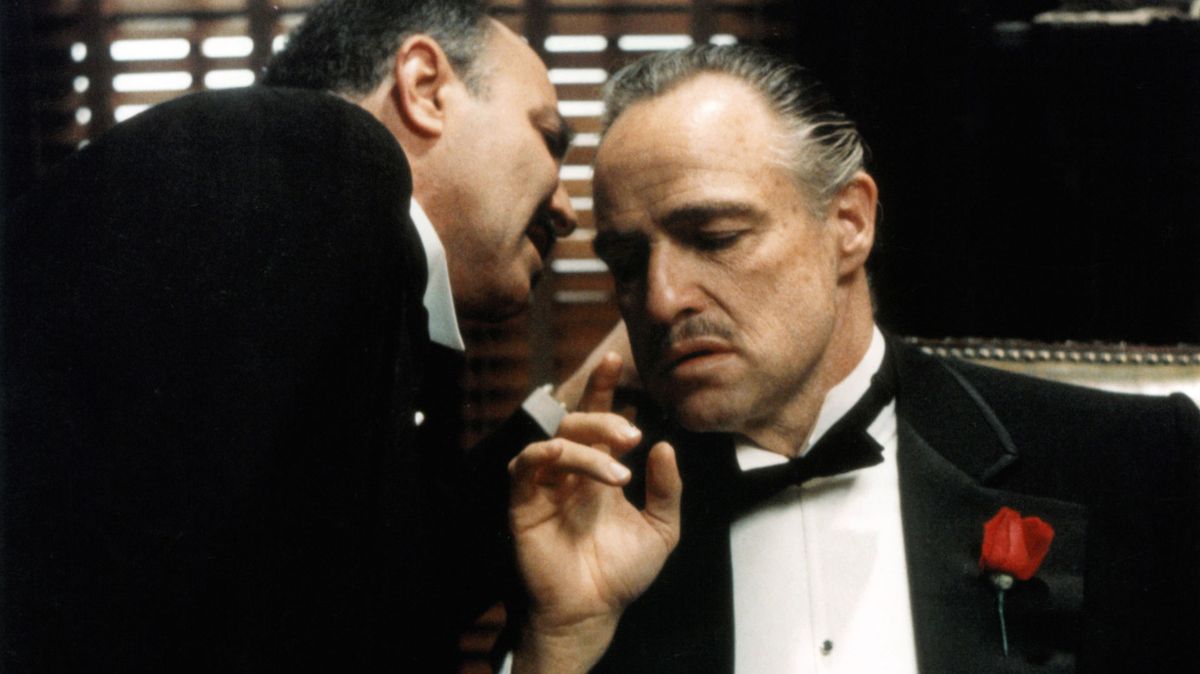 Based on Mario Puzo's 1969 crime novel of the same name, Francis Ford Coppola's cinematic masterpiece The Godfather (1972) chronicles the fictional Corleone family and its rise to becoming one of the most powerful mafia families in America.

The Godfather franchise is heavily influenced by many real-life mobsters and events. Here are some of the true stories behind the films:

Real-life mobsters and entertainers served as inspiration for the characters 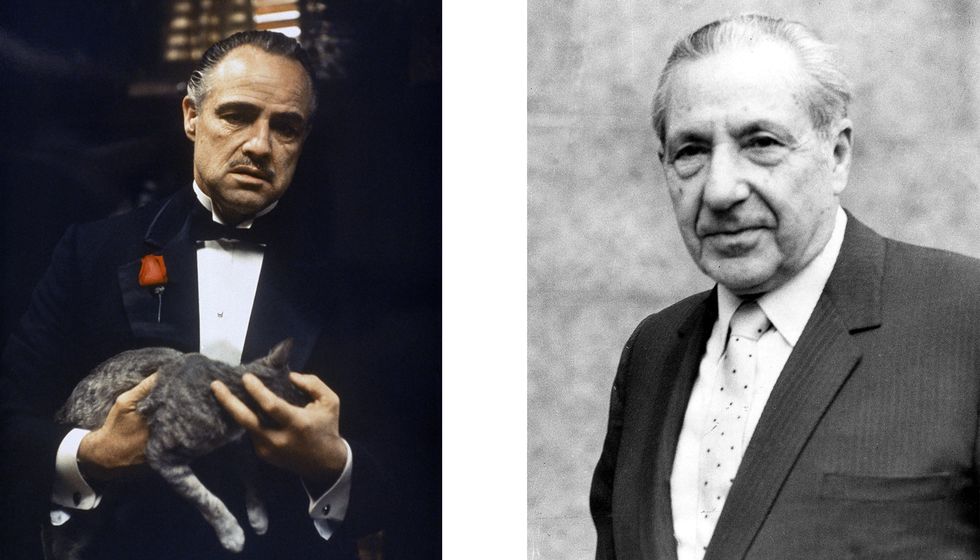 Portrayed by Brando, the character of Vito was actually a combination of a few mobsters. Like real-life mobster Joe Profaci, Vito had an olive oil business to serve as a front for his illegal activities and kept his circle small and intimate. Like Carlo Gambino, Vito had a reputation for being a modest, under-the-radar figure. However, the Godfather character is most similar to real-life mobster Frank Costello, who was strategic, reasonable and known as "The Prime Minister" of the mob because of his wise counsel. Like Costello, Vito used his diplomatic skills and his connections to influential businessmen and politicians to keep his power in place and also discouraged his underlings from getting involved in the narcotics business.

The similarities between the character of Johnny Fontane (played by Al Martino) and singer Frank Sinatra were so conspicuous that Sinatra was purportedly irked by it. In the film, Fontane reaches out to Vito to help him get out of a contract he was unhappy with. Likewise, in real life, Sinatra was able to wiggle out of his contract with the help of his mob connections. Desperate to rescue his fading career, Fontane decides to go into acting and gets cast in a big movie — a move that Sinatra made when he starred in From Here to Eternity, which subsequently reinvigorated his popularity. Interestingly, Coppola briefly mulled over the idea of casting Sinatra as Vito.

"Do you know who I am? I'm Moe Greene!" exclaimed a defiant Moe Greene to Michael in The Godfather. Portrayed by Alex Rocco, Greene was a huge, brash personality who helped bring life to the Las Vegas scene. In real life, mobster Bugsy Siegel did just that. As a hitman for the East Coast organization Murder Inc., Siegel moved out West and helped build Vegas, operating the luxury casino the Flamingo. Siegel had no qualms about showing off and circulating in the celebrity crowd, and Greene expressed the same characteristics. Both of Jewish descent, Siegel and Greene also met similar fates when a fusillade of bullets was shot through their bodies, notably each man received a bullet in their eye sockets. However, Siegel was killed for stealing money from the mob, while Greene's disrespect for the Corleones hastened his end.

Mobster Joseph Bonanno didn't want his son, Bill, to get into the family business. Encouraging Bill to live on the straight-and-narrow, Joseph got his son to go to law school — just like Vito had his son Michael do.

Despite his father's wishes, Michael — like Bill — found his way into the mob life. However, that's where the common thread ends. In real life, Bill's personality was more like Michael's older brother, Fredo. He was ostentatious, attention-seeking, lived off of his family's wealth and never received the respect he so badly wanted from his father's men.

In The Godfather, the Corleones discovered one of their own was conspiring against Michael's ascent to power. At first, the suspicion is directed to a more brazen mobster, but the family soon finds out it is the quiet stalwart Salvatore Tessio (played by Abe Vigoda) who was behind the attempted assassination of Michael at a mob summit.

Real-life gangster Gaspar DiGregorio was the inspiration behind Tessio's character. When Joseph Bonanno tried to transfer his power over to his son, DiGregorio felt wronged and began a divisive campaign against the mob leader, which the newspapers dubbed, the Banana War. As Tessio did in the film, DiGregorio tried to pull a meeting together between the two factions, with the intention of assassinating the Bonnanos. Unlike DiGregorio's jealousy and lust for power, though, Tessio wanted Michael removed because he just didn't think the latter was the best man for the job. While DiGregorio failed to kill his rivals and died in obscurity, Tessio was "taken for a ride" and executed for his betrayal.

The Place and Circumstances 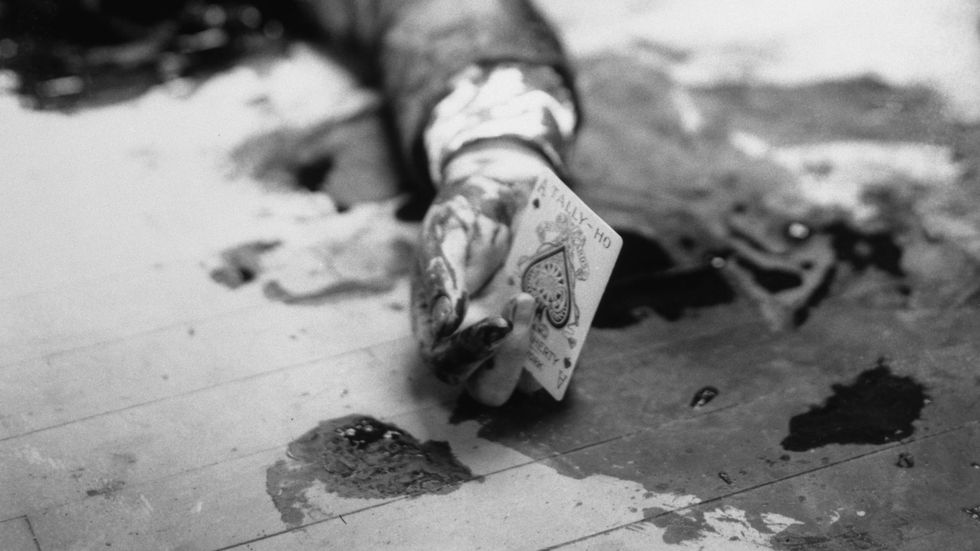 In one of the most memorable scenes in The Godfather, Michael makes a pivotal shift from being innocent to turning into a full-fledged gangster. Inviting two of his father's enemies to a restaurant to settle their issues, Michael takes off to the bathroom, where he locates a gun planted for him. He returns to dinner and proceeds to shoot both men to death.

The film's restaurant shooting was inspired by one of the most notorious public executions in mob history. In 1931, famed mobster Lucky Luciano, who was bent on usurping power from his mentor and boss Giuseppe "Joe" Masseria, asked him out to lunch at a restaurant in Coney Island. When Luciano took off to the men's room, Masseria met his untimely end when he was gunned down by a group of hitmen.

The Senate hearings in Godfather II, which forced Michael to testify about the mafia, were similar to the real-life Congressional hearings that occurred in the 1950s and 1960s that brought mobsters Costello and Vito Genovese before the public.

Most notably, mobster Joe Valachi offered testimony, but not as a devoted mobster but rather as a government witness. He was the first mafia member to appear in a public setting and acknowledge the organization's existence, which ultimately initiated its downfall.

When Michael guns down his father's enemies, he takes off to Sicily, ends up falling in love and marries local village girl Apollonia Vitelli. The storyline was a page taken from the lives of mobster Genovese and Luciano. To avoid prosecution for a murder he committed, Genovese escaped to Italy and only returned when he was in the clear. In Luciano's case, he was deported to the homeland and ended up directing his illegal activities in the United States from there — never to return home again. And like Michael, Luciano fell in love with a young Italian woman, a ballerina named Igea Lissoni, whom he stayed with until her death. 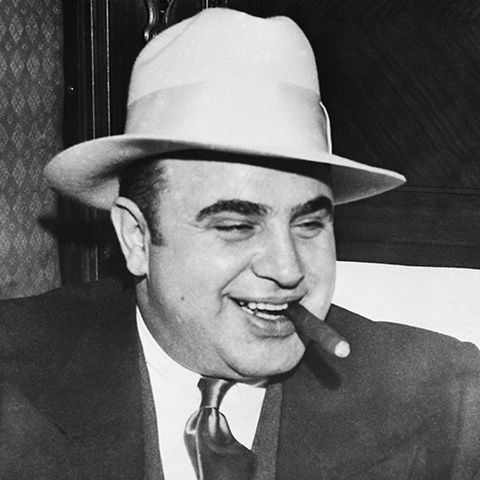