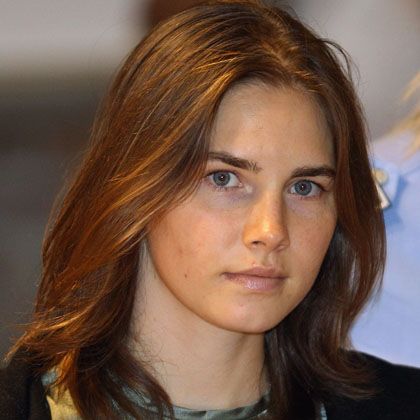 Who Is Amanda Knox?

Amanda Knox was tried and convicted for the murder of British student Meredith Kercher, who died from knife wounds in the apartment she shared with Knox in 2007. Knox and her then-boyfriend, Raffaele Sollecito, were both found guilty of killing Kercher, receiving 26- and 25-year prison sentences, respectively. In October 2011, Knox and Sollecito were acquitted and set free. In March 2013, Knox was ordered to stand trial again for Kercher's murder; Italy's final court of appeal, the Court of Cassation, overturned both Knox's and Sollecito's acquittals. Knox and Sollecito were again found guilty of murder in February 2014, with Sollecito receiving a 25-year prison sentence and Knox receiving a 28.5-year sentence. The Supreme Court of Italy overturned her and Sollecito's convictions in 2015.

Knox was born on July 9, 1987, in Seattle, Washington, to Edda Mellas, a math teacher, and Curt Knox, a vice president of finance at Macy's. Knox has a younger sister, Deanna, and two step-sisters Ashley and Delaney Knox. Knox's parents divorced when she was a toddler.

Growing up in a middle-class neighborhood, Knox played soccer and her athletic skill earned her the nickname 'Foxy Knoxy,' according to her parents. It was a nickname that would come back to haunt Knox years later.

In 2005, Knox graduated from Seattle Preparatory High School. She entered the University of Washington that fall, planning to pursue a degree in linguistics.

By all appearances, Knox was an ordinary college student. She threw loud parties, was named to the Dean's List, and worked several jobs to pay her tuition. Friends recall her as a kind, gentle individual.

To further pursue her linguistics degree, the 20-year-old Knox left Washington and headed for Perugia, Italy, where she planned to spend a year at the University for Foreigners.

In Perugia, Knox roomed with Meredith Kercher, a 21-year-old student from London. Kercher was also studying linguistics abroad for a year.

On November 1, 2007, Knox was supposed to work at a pub called Le Chic, where she had a part-time job. After her boss, Patrick Lumbumba, sent her a text message saying that she wasn't needed, Knox went to Sollecito's apartment for the night.

Knox and Sollecito reportedly returned to her apartment the next day around 12 p.m. and found the front door open, windows broken and blood in the bathroom. Knox called Kercher's phone, but there was no answer. She then called their third roommate. Finally, Knox called her mother in Seattle, who told her to call the police.

Two officers soon appeared at the scene; they were postal police officers, used to investigating postal crimes, not murder investigations. They entered the apartment to investigate, and kicked down the door to Kercher's bedroom. Inside, they found Kercher's body on the floor, covered in a duvet that was soaked in blood.

Knox and Sollecito were taken to the police station, and for five days, they were interrogated. Later, Knox would say that no interpreter was present. Though her mother urged her to flee the country, Knox chose to stay in Perugia, wanting to meet Kercher's family. Knox later said that she was bullied and beaten while in police custody.

Finally, Sollecito admitted that Knox could have left his apartment at night while he was sleeping. When detectives presented this to Knox as an accusation, she broke down. Knox signed a confession saying that she had returned to her apartment on the night of November 1, 2007, and had been standing in the next room while Lumumba stabbed Kercher to death.

On November 6, 2007, Italian police announced that Kercher's killers had been found, and Knox and Sollecito were arrested. Lumumba had an alibi — he was seen bartending at Le Chic on the night of the murder.

Two weeks later, a forensics lab reported the results of its examination of DNA evidence taken from the crime scene. The evidence didn't point to Knox or Sollecito — it pointed to someone else: Rudy Guede, a friend of the Italian men who lived in the apartment below Knox's and Kerchner's apartment. Guede had been accused of several burglaries but didn't have any convictions on his record. He was immediately arrested in Germany, and admitted to being at the murder scene, but stated that he didn't kill Kercher. He also stated that Knox and Sollecito were not involved.

Guede opted for a fast-track trial. In October 2008, he was found guilty of the murder and sexual assault of Kercher and was sentenced to 30 years in prison.

Knox and Sollecito chose to have a full trial and were tried together. The Perugian prosecutor, Giuliano Mignini, painted a picture of Knox that shaped how the public saw her. He described a sex-crazed marijuana smoker who had dragged her boyfriend into a game of rough sex that ended in Kercher's murder — even calling Knox a "she-devil." On December 29, 2009, Knox was sentenced to 26 years in prison, and Sollecito to 25 years.

Knox's family and many supporters, mostly American, protested the sentencing. With a beautiful young woman at its center, the case became an international sensation. Supporters criticized the Italian legal system, which they said had major flaws, and claimed Knox was discriminated against because she was American and because she was an attractive young woman.

In April 2010, Knox's and Sollecito's lawyers filed appeals, contesting the evidence and the credibility of the witnesses. The appeal process began in December 2010. This time, forensic experts said that DNA used in the first trial was unreliable. In June 2011, the defense called a witness who testified that, in prison, Guede had said Knox and Sollecito were not involved in the murder.

Knox and Sollecito had support in their appeal from the Idaho Innocence project, a legal organization that uses DNA testing to prove the innocence of wrongly convicted people.

On October 3, 2011, two years after their first trial, the murder convictions against Knox and Sollecito were overturned. Knox's prior conviction for defaming Patrick Lumumba was upheld, and she was sentenced to a three-year term and fined. Upon the announcement of the verdict, reporters' cameras caught Knox breaking into tears. Knox flew from Rome, Italy, to London, England, and then home to Seattle, Washington.

Not long after returning home, Knox picked up her studies at the University of Washington, majoring in creative writing. In a sharp turn of events in March 2013, Knox and Sollecito were both ordered to stand trial again for the murder of Kercher by the Italian Supreme Court. Italy's final court of appeal, the Court of Cassation, overturned the acquittals of both Knox and Sollecito.

Knox released a statement shortly after learning that she would again face trial for murder: "It was painful to receive the news that the Italian Supreme Court decided to send my case back for revision when the prosecution's theory of my involvement in Meredith's murder has been repeatedly revealed to be completely unfounded and unfair," she stated, adding, "I believe that any questions as to my innocence must be examined by an objective investigation and a capable prosecution. The prosecution responsible for the many discrepancies in their work must be made to answer for them, for Raffaele's sake, my sake, and most especially for the sake of Meredith's family. Our hearts go out to them."

After the acquittal was overturned, the new trial began on September 30, 2013. Because the court in Perugia lacked the appropriate amount of space needed, the location of the second trial was in Florence, Italy, with Judge Alessandro Nencini overseeing the trial. Knox made no arrangements to attend any portion of the trial, while Sollecito attended the trial as it came to an end with a verdict.

A new piece of evidence, which was referred to as evidence 36-I, was examined in the trial. Evidence 36-I was a minuscule piece of material that was found on a kitchen knife that Italian prosecutors believed was used to kill Kercher. New testing did not find Kercher’s DNA on the knife, however, experts found traces of Knox’s DNA on its handle. Knox’s legal team used the finding in her defense. “It means that Amanda took the knife exclusively for cooking matters, to keep in the kitchen and to use it,” Knox’s defense lawyer Luca Maori told the Associated Press. “It is something very important. It is absurd to use it for a murder and put it back in the drawer."

In a decision that created shockwaves around the globe in early February 2014, Knox and Sollecito were again found guilty of murdering Kercher, following nearly 12 hours of deliberation by an appeals court jury that concluded by upholding the lower court's 2009 decision against Knox and her former boyfriend. Sollecito received a 25-year prison sentence while Knox, who was convicted of slander in addition to murder, was sentenced to 28 1/2 years in prison.

"I am frightened and saddened by this unjust verdict," Knox wrote of the verdict. "Having been found innocent before, I expected better from the Italian justice system. The evidence and accusatory theory do not justify a verdict of guilt beyond a reasonable doubt. ...There has always been a marked lack of evidence." The 26-year-old added, "This has gotten out of hand. Most troubling is that it was entirely preventable. I beseech those with the knowledge and authority to address and remediate the problems that worked to pervert the course of justice and waste the valuable resources of the system."

In March 2015, the Supreme Court of Italy overturned the 2014 convictions of Knox and Sollecito. This ruling was the final decision in the case against the two and more details on the court's verdict was released in June. After learning about the verdict, Knox issued a statement, saying "I am tremendously relieved and grateful" for the court's decision.

After returning home, Knox finished her degree and began working as a freelance journalist. She wrote Waiting to Be Heard: A Memoir, a bestselling book about her experience, which was released in 2013. Her story is the subject of Amanda Knox, a Netflix documentary which was released in September 2016.

In addition to her writing career, Knox appears at events for the Innocence Project, which advocates for people who have been wrongfully imprisoned. She became engaged to childhood friend and musician Colin Sutherland in 2015 but the couple later split. In late 2018 she became engaged to author Christopher Robinson.

Return to Italy and Court-Awarded Damages

In August 2017 Knox announced she was making plans to return to Perugia in 2018 as part of a follow-up book to her bestselling memoir.

In January 2019 the European Court of Human Rights in Strasbourg, France, ruled that Italy had to pay Knox 18,400 euros ($20,000) for the failure to provide legal assistance and an independent interpreter when she was interrogated in the aftermath of the 2007 murder of her roommate.

Knox later agreed to speak at the Criminal Justice Festival in Modena, Italy, in June 2019. "The Italy Innocence Project didn't yet exist when I was wrongly convicted in Perugia," she wrote on Twitter. "I'm honored to accept their invitation to speak to the Italian people at this historic event and return to Italy for the first time."

Knox celebrated her marriage to longtime boyfriend Christopher Robinson in a Renaissance and Star Wars-themed wedding on February 29, 2020. The pair originally obtained a marriage license on December 1, 2018. "We filed paperwork to be legally married in December of last year to simplify our taxes and insurance," Knox stated in a press release in August 2019.