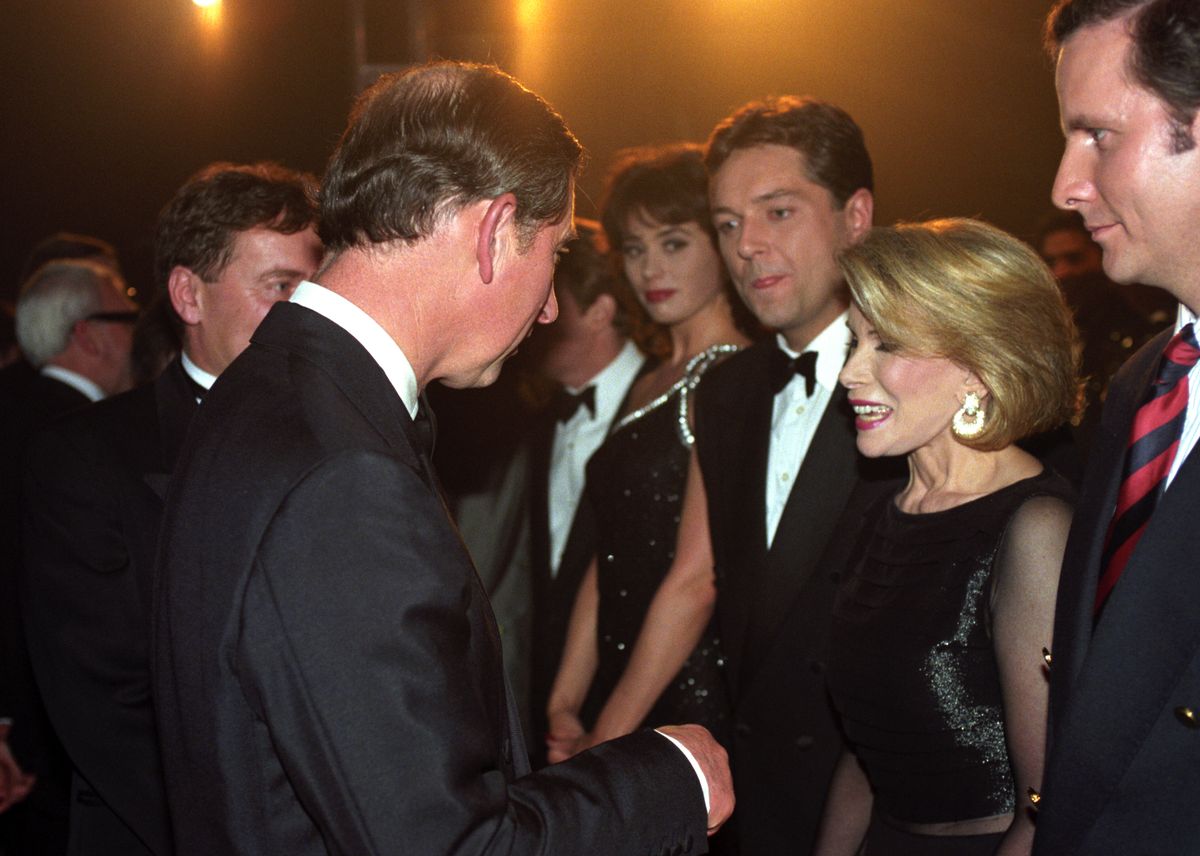 Joan Rivers climbed to the top of the comedy ladder thanks to her caustic quips targeting actresses, people on the red carpet, the rich and powerful, and even her own life. Besides bringing her success, her no-holds-barred humor helped Rivers form a surprising friendship with the then-Prince Charles and his wife Camilla, the Duchess of Cornwall. This friendship lasted from 2003 until the end of Rivers’ life in 2014.

In 2003, Rivers and Charles were introduced by mutual friends while on a painting vacation in the south of France. The heir to the British throne and the Brooklyn-born comedienne got along great. Rivers later told People magazine, “We sat next to each other at a dinner party and got friendly. He’s darling.”

Over the course of her career Rivers had cracked jokes about the royal family, including one jibe that the size of Charles’ ears meant he’d never need a paddle to play ping-pong. Fortunately for her, Charles loved comedy, counting among his favorites Monty Python’s Flying Circus and comedian Peter Sellers, and therefore no jokes stood in the way of their developing connection. In fact, Charles enjoyed Rivers’ humor so much that he ended up giving her the nickname of “Miss Potty Mouth.”

After meeting Charles, Rivers also became friends with the prince’s longtime love, Camilla. Like Charles, Camilla enjoyed Rivers’ humor, exploding with laughter when Rivers offered to throw her a lingerie shower before the couple’s wedding. Rivers was at Windsor Castle to celebrate Charles and Camilla’s nuptials on April 9, 2005, one of just four Americans in attendance. 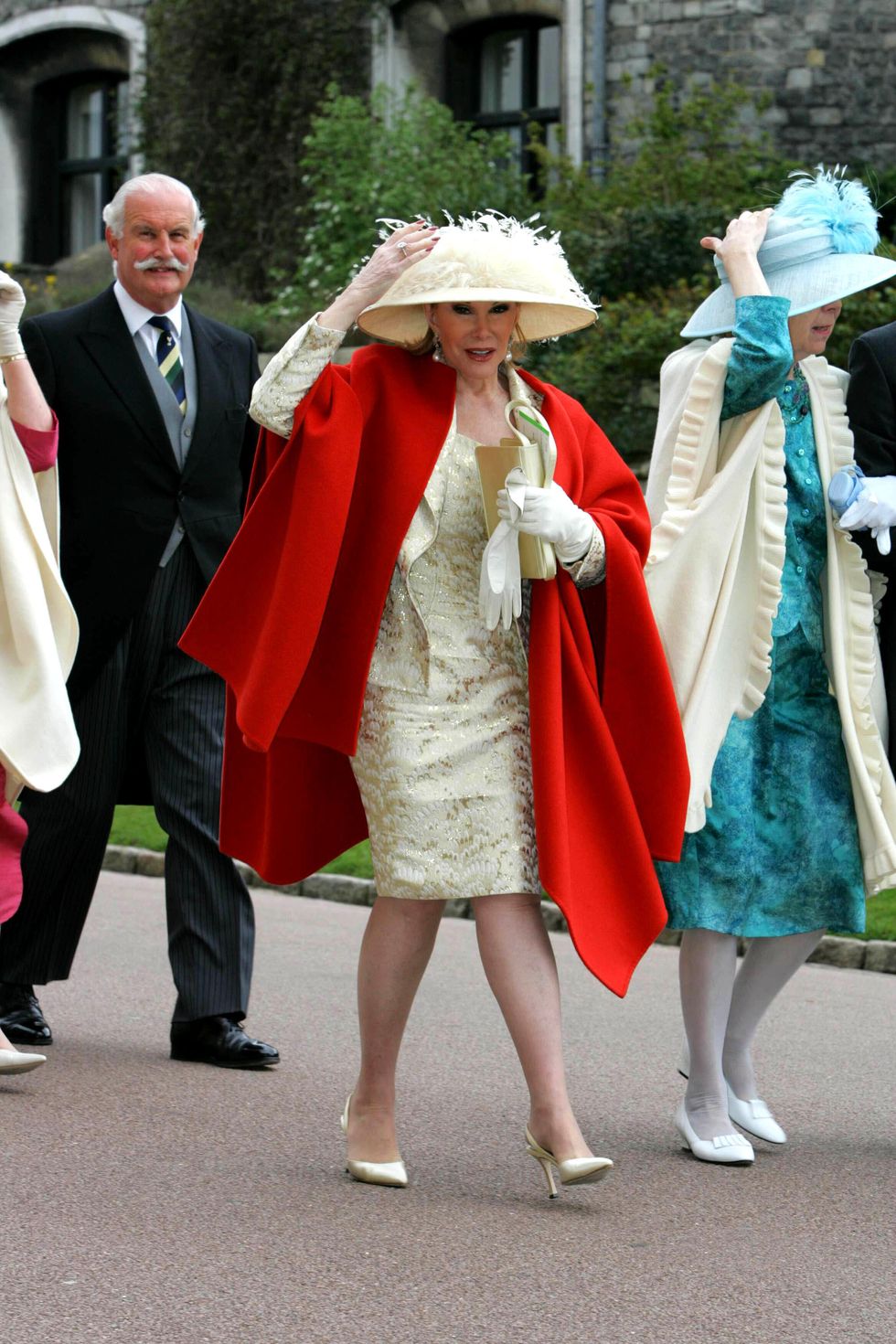 In addition to being a guest at Charles and Camilla’s wedding, Rivers took part in other royal events. In 2008, Charles’ 60th birthday celebrations included a “We Are Most Amused” comedy gala where Rivers performed. Another time, Rivers reportedly announced at a Buckingham Palace dinner, “I just want to say that this is for all you b*****s in the room who married your husbands for their money.” The prince laughed as Rivers continued, “I know who you are and Charles knows, too, because I’ve pointed you all out to him.”

Rivers once brought fellow comedian Kathy Griffin as her guest to a two-night royal gathering: one evening at Windsor Castle, the next at Buckingham Palace. There, Griffin witnessed genuine affection between her friend and the prince. In her book Celebrity Run-Ins, Griffin wrote of Charles, “Seeing how obviously thrilled he was to see Joan that night was very moving.”

Rivers also got to be presented to Queen Elizabeth II. It was a proud moment in Rivers’ life—and something she likely never would have experienced without her friendship with Charles.

Their friendship went beyond performances and charity dinners. Rivers visited Balmoral Castle on another painting vacation and was a guest at the prince’s country estate of Highgrove. On one Highgrove visit, she asked Charles if she could scatter the ashes of her best friend Tommy Corcoran there. Charles agreed, another indication of how he valued Rivers.

In 2010, Rivers gave New York Magazine a window into this friendship by talking about the prince’s Christmas gifts, which often consisted of two exquisite teacups: “One year I took a picture under my Christmas tree with the teacups and wrote, ‘How could you send me two teacups when I’m alone?’ Another time I wrote, ‘I’m enjoying tea with my best friend!,’ and I sent a picture of me in a cemetery.” Charles never directly acknowledged these photos, making her wonder if she should instead send regular thank-you notes—until she heard, via a mutual friend, that each year the prince eagerly anticipated Rivers’ response.

Yet even Rivers adhered to some of the limits of royal protocol. In 2013, before Charles’ first grandchild, Prince George, was born, Rivers admitted she’d held back from advising him about life as a grandparent. She told E! News, “When you are dealing with the royals, you have to know what line you cannot go over.”

Rivers once characterized her level of royal friendship as “not inner circle. Outer-inner circle.” This didn’t keep her from being a consistent and vocal defender of Charles. “He is so charming, so humorous. All the passions that everyone used to laugh at him for—organic food, architecture, talking to the flowers, we’re all into those things now,” she said in 2011. “He is so far ahead of his time, and I think he will be a very good monarch. He is a very smart man and I adore him.”

After Rivers died on September 4, 2014—following complications during a routine medical procedure—her royal pals responded with their own public declaration of affection. A statement noted both Charles and Camilla were “deeply saddened” by Rivers’ death. It also included moving sentiments from Charles: “Joan Rivers was an extraordinary woman with an original and indefatigable spirit, an unstoppable sense of humour and an enormous zest for life. She will be hugely missed and utterly irreplaceable.”

Rivers would have preferred to stick around and keep making people laugh with her talent and hard work. However, having her death recognized by her friends in the royal family is the kind of acknowledgment she would have wanted. When she embarked upon her comedy career, she probably never imagined where it would take her.