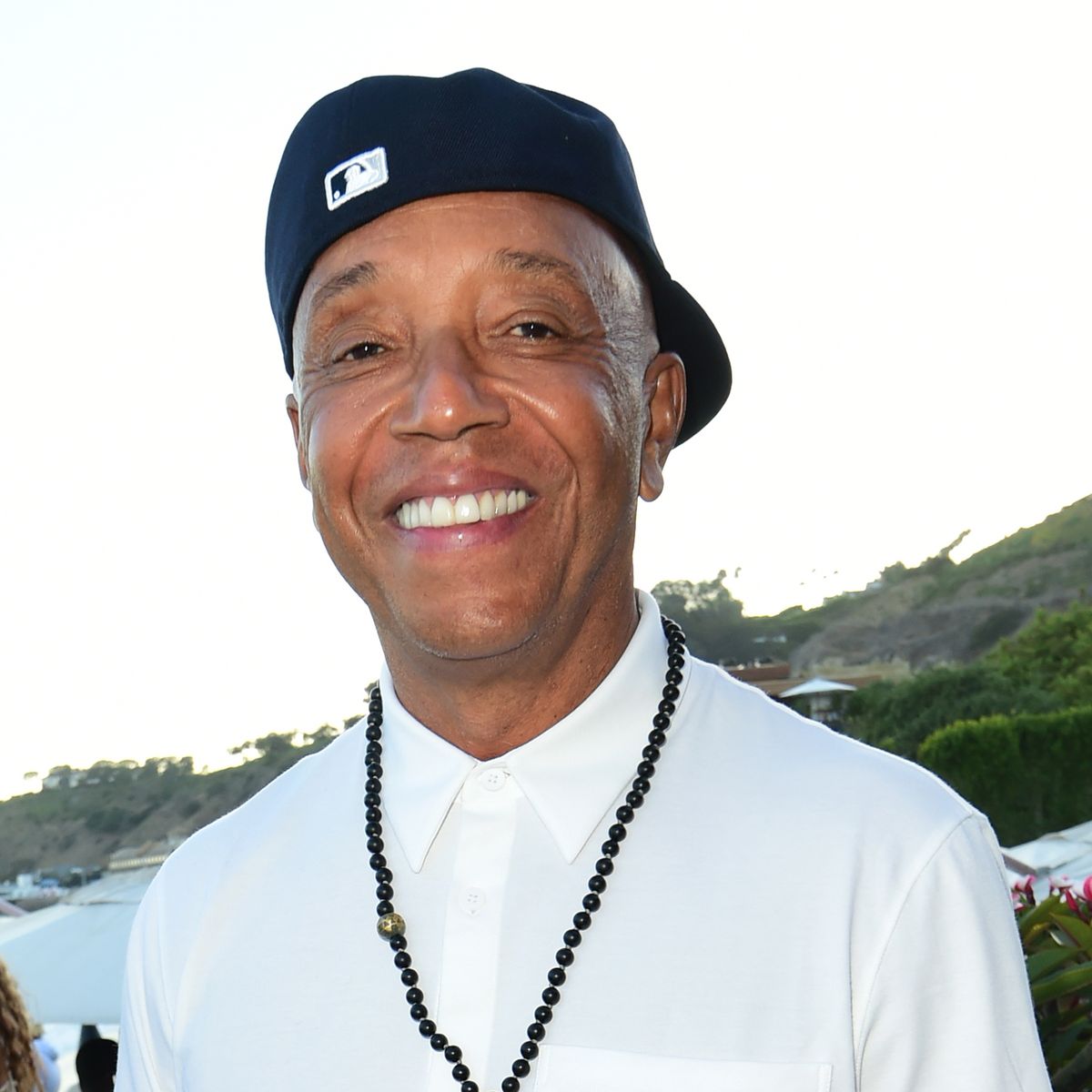 Who Is Russell Simmons?

Before Jay Z, Diddy and Dre there was Russell Simmons — the original hip-hop mogul. A former New York street hustler turned promoter, artist manager, record producer, and label owner, Simmons also added business magnate and self-help guru to his resume. With his diverse portfolio of interests, he's amassed a personal fortune of more than $300 million and has changed the face of hip hop many times over at Def Jam, the label he co-founded with the producer Rick Rubin. He pioneered the rap-rock crossover with Rubin on Run-DMC's "Walk this Way," co-produced the first gold-certified hip-hop single (for Kurtis Blow) and album (for LL Cool J), blended the worlds of hip hop and fashion with Run-DMC, and helped create a global audience for rap music. Simmons suddenly announced he was stepping down from his companies after being accused of sexual assault in late 2017, but continued to face new allegations of assault.

Born and Raised in Queens, NY

Russell Simmons was born on October 4, 1957. He was the second of three sons whose parents — Daniel Sr., a teacher, and Evelyn, an administrator — raised their family in the Jamaica neighborhood of Queens, New York. His parents were hardworking and aspirational, but the wider community in Queens was "destroyed by drugs," Simmons told The Guardian in 2013. "Everybody shot dope… I used every drug there is… but it didn't make me a bad person: it made me a sad person, a diseased person."

Simmons also sold drugs for a time and ran with a street gang, the Seven Immortals. His concerned father made him get a job at Orange Julius in Greenwich Village, in an attempt to steer him away from trouble — but Simmons got fired after a month for throwing oranges at people. He finally got his wake-up call when one of the Seven Immortals was murdered — after which he dropped out of gang life, winding up at the City College of New York in Harlem, where he majored in sociology.

How Simmons Got His Start

One night in 1977, Simmons heard the "world famous" MC Eddie Cheeba rapping in a club. It was Simmons' first brush with hip hop, and he felt like he'd "just witnessed the invention of the wheel." He began putting on parties with a fellow student, Curtis Walker — a talented DJ and MC whom Simmons signed to his newly formed company, Rush Management, under the stage name Kurtis Blow.

Inspired by the success of "Rappers' Delight" in 1979, they recorded a single together, "Christmas Rappin.'" But Simmons could not get a record deal for Blow. So he pressed vinyl copies of "Christmas Rappin'" himself and gave them to DJs to play in clubs, sparking the interest of retailers who were led to believe that they could buy the record from the Polygram label (they couldn't). When Polygram began receiving calls, their interest was piqued and Blow got his record deal — a masterstroke by Simmons. "Christmas Rappin'" was released in December 1979 and went on to sell more than 500,000 copies. Simmons never completed college; by now his path was set.

By 1982, Simmons' younger brother, Joseph, had formed a hip-hop group with his friends Darryl "DMC" McDaniels and Jason "Jam Master Jay" Mizzell. Simmons co-produced two songs for them, "It's Like That" and "Sucker MCs" — the latter's sparse, hard-edged sound was unlike anything heard in hip hop before: it was the first time Simmons had reinvented the genre; it wouldn't be the last. "Because of the way it sounded and the impact it had on how people heard rap records, I believe co-producing "Sucker MCs" is the single most creative thing I have ever done," Simmons wrote in his autobiography. On the strength of those two songs, Simmons secured a deal for Run-DMC with the independent label Profile Records. Run-DMC's self-titled debut album in 1984 became the first rap album to be certified gold.

A year earlier, 26-year-old Simmons had been introduced to an aspiring producer, Rick Rubin, then 20, at the Danceteria nightclub in Manhattan. They were chalk and cheese — Simmons a savvy hustler, Rubin a student punk-rock fan from suburban Long Island. But they immediately clicked and Simmons became an equal partner at Rubin's fledgling label, Def Jam (which he had been running from his dorm room at New York University). The pair had a hit with their first release — "I Need a Beat," by the 16-year-old LL Cool J — enabling Simmons to secure a distribution deal with Columbia: the first deal of its kind for a hip-hop independent with a major label.

Cashing Out on Def Jam

For the next four years, Def Jam blazed a trail for hip hop. Highlights included turning frat-boy rap into an unlikely global phenomenon with The Beastie Boys' album Licensed to Ill; landing the first million-dollar endorsement deal for a hip-hop group when Run-DMC's single "My Adidas" came to the attention of the sportswear giant; fusing rock with hip hop on Run-DMC and Aerosmith's "Walk this Way" — the video becoming the first featuring a hip-hop act to be played on heavy rotation at MTV; and turning the world on to Black-power politics via the most explosively radical group in hip-hop history, Public Enemy.

Rubin left the label in 1988 under circumstances that have never been fully explained. Simmons hinted to Billboard, many years later in 2016, that there had been creative differences, but also suggested that these had not been insurmountable; it has also been widely reported that Rubin lost a power struggle with Lyor Cohen, who would take his place at Def Jam and become the label's president. In 1994, Simmons and Cohen sold half of Def Jam to Polygram for $33 million; they sold the rest to Seagram (which by then had bought Polygram) in 1999 for $130 million, according to Rolling Stone. Now under the Universal Music Group umbrella, Def Jam continues to be hugely influential although neither of its founders is involved in the label.

Even before Simmons had made his fortune from the sale of Def Jam, he was expanding his business interests beyond music — creating a template that other hip-hop moguls would follow. He co-founded the Simmons Lathan Media Group in 1989, creating hit TV series such as The Def Comedy Jam and Russell Simmons Presents Def Poetry, the latter of which became a Tony Award-winning Broadway production.

He launched a clothing business, Phat Farm, in 1992 and expanded it to become Phat Fashions before selling the company to Kellwood in 2004 for a reported $140 million. (He also formed two other clothing lines, ArgyleCulture "for the millennial male" and Tantris, which makes yoga apparel). In 2013 he co-founded a financial-services company, Unirush LLC, which offers prepaid debit cards to low-income customers — its sale to the Green Dot Corporation for $147 million was announced in January 2017.

Simmons uses his parent company, Rush Communications, to oversee his vast business portfolio — which also includes the pop-culture website Global Grind, multiple nonprofits, Celsius ("the world's first negative calorie drink"), Def Pictures and Rush Books, which publishes Simmons' business and self-help books, including 2008's Do You! 12 Laws to Access the Power in You to Achieve Happiness and Success — which has a foreword from Donald Trump.

Simmons has known Trump for more than three decades and used to count the current president as a friend. That friendship soured when Simmons began to publicly criticize Trump during the election campaign in 2016 "You must stop this hateful and harmful language towards women and people of color," Simmons wrote in an open letter to Trump published by the Huffington Post on November 11, 2016, two days after the election. "That is unacceptable… An entire generation of young people fear that this country has just elected its first dictator, and I cannot blame them for thinking that. However, I know you and I have to believe that you are willing to listen to outside people."

From New York to the Hollywood Hills, Yogi Style

Simmons moved from New York to L.A. in 2014 and took up residence in the Hollywood Hills. He divorced his former wife, Kimora Lee, in 2009; they continue to co-parent two daughters, Ming Lee and Aoki Lee. In November 2016 he opened the Tantris yoga center in West Hollywood, an 8,000 square-foot space with two studios, a juice bar and — this being Hollywood — a blow-dry bar. A dedicated yogi for more than 20 years, Simmons himself taught a class on Fridays. "Devotional music" was a feature at Tantris, he told The Hollywood Reporter, until the studio closed in summer 2018.

In November 2017, amid an outpouring of women stepping forward to describe accounts of sexual assault at the hands of powerful men, model Keri Claussen Khalighi accused Simmons of forcing himself on her in 1991. Simmons defended himself by saying the interaction was "mutual."

On November 30, screenwriter Jenny Lumet, daughter of famed Hollywood director Sidney Lumet, penned a Hollywood Reporter article that described an unwanted sexual encounter with Simmons in 1991. Shortly afterward, Simmons released a statement in which he recalled the events of that evening differently, but acknowledged that "her feelings of fear and intimidation are real" and apologized.

He added that he was stepping down from his array of businesses so as to not distract from their goals. "The companies will now be run by a new and diverse generation of extraordinary executives who are moving the culture and consciousness forward," he wrote. "As for me, I will step aside and commit myself to continuing my personal growth, spiritual learning and above all to listening."

On December 13, The New York Times reported that three more women had accused Simmons of rape, and described other occasions in which the music producer exposed himself or became violent.

“I vehemently deny all these allegations,” said Simmons, in a corresponding statement. ”These horrific accusations have shocked me to my core and all of my relations have been consensual. I have enormous respect for the women’s movement worldwide and their struggle for respect, dignity, equality and power. ... I have accepted that I can and should get dirt on my sleeves if it means witnessing the birth of a new consciousness about women.”

In June 2018, a lengthy story in The Hollywood Reporter brought to light more accusations against Simmons, this time from former Def Jam assistant Sil Lai Abrams. According to Abrams, she and Simmons engaged in consensual sex at times during the early 1990s, but after she attempted to cut off the physical aspect of their relationship, he forced himself on her when she was too inebriated to stop him.

The THR piece also described how Abrams sought to tell her story via an article in The New Yorker and an interview with MSNBC's Joy Reid, before MSNBC backed out over concerns about the veracity of some of her claims. A lawyer for the accused responded with a statement that said: "Russell Simmons provided overwhelming material to THR (some on the record and some off the record) to support his unequivocal denial of any wrongdoing, and THR chose to ignore it. It is extremely disappointing that a 24-year-old story, which did not get past very credible news outlets, was published in light of the massive contrary evidence."

In July, Alexia Norton Jones, a daughter of a former lawyer for Martin Luther King Jr., added her name to the growing list of Simmons' accusers with her first-person account in Variety. Jones said she went on a date in 1990 with the rising record executive, after which he suddenly and forcefully tried to have sex with her, until she relented.

Simmons' alleged misconduct was the subject of the documentary On the Record, which largely focused on the rape accusations made by former Def Jam executive Drew Dixon. Despite the attention-grabbing departure of Oprah Winfrey from the project in January 2020, On the Record premiered as scheduled soon afterward at the Sundance Film Festival, drawing strong reviews.