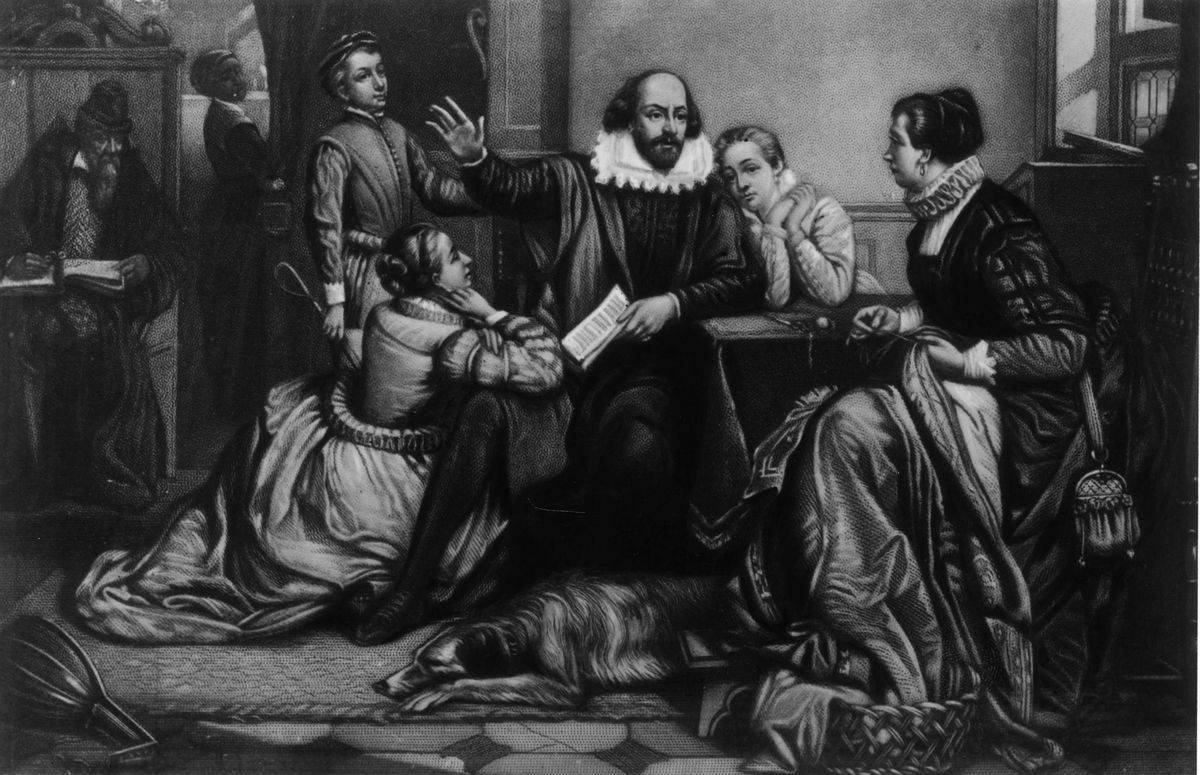 The son of a glovemaker and sometimes municipal politician from Stratford-upon-Avon, William Shakespeare seems to have risen from modest means to become one of history’s greatest writers, a peerless poet and dramatist whose works have thrilled readers for more than 400 years. But did Shakespeare actually write the works attributed to his name?

Modern-day historians believe that some of his works may have been partially written in tandem with others. But some scholars and even fellow writers are skeptical that Shakespeare wrote any of his celebrated sonnets or plays, and that “Shakespeare” was actually a pseudonym used to disguise the true identity of the real author. Surrounded by difficult issues regarding social class and education, the Shakespeare authorship question isn’t new, with dozens of possible theories about who the “Bard of Avon” really was — or wasn’t.

The argument against Shakespeare hinges on key critiques

Anti-Stratfordians, the nickname given to those who contend Shakespeare wasn’t the true author, point to a significant lack of evidence as proof of their claims. They argue that records of the time indicate that Shakespeare likely received only a local primary school education, did not attend university, and therefore would not have learned the languages, grammar and vast vocabulary on display in Shakespeare’s works, some 3,000 words. They note that both of Shakespeare’s parents were likely illiterate, and it seems as if his surviving children were as well, leading to skepticism that a noted man of letters would neglect the education of his own children.

They also note that none of the letters and business documents that survive give any hint of Shakespeare as an author, let alone a one famous during his lifetime. Instead, the written records detail more mundane transactions, like his pursuits as an investor and real estate collector. If Shakespeare’s worldly wisdom was the result of post-grammar school reading and travel, they argue, where is the evidence that he ever left England? Why was their no public mourning for him when he died? And why does his will, which listed a number of gifts to family and friends, not include a single book from what would presumably be an extensive library?

For those who firmly believe that Shakespeare was the true author of his plays, the Anti-Stratfordians are simply choosing to ignore the facts. A number of Shakespeare’s contemporaries, including Christopher Marlowe and Ben Jonson, came from similarly modest families. There were no public claims during Shakespeare’s lifetime that he was acting as a pseudonym. In fact, Tudor officials responsible for ascertaining authorship of plays attributed several works to Shakespeare, Jonson and others, including actors who had performed his plays, paid tribute to him in the years following his death and even helped arrange publication of his works.

Some believe Francis Bacon is the 'real' Shakespeare

Francis Bacon was one of the earliest alternatives put forward, beginning in the mid-19th century. A graduate of Cambridge, Bacon was highly accomplished. He was one of the creators of the scientific method, was a well-regarded philosopher, and rose through the ranks of the Tudor court to become Lord Chancellor and a member of the Privy Chamber. But was he also the “real” Shakespeare?

That’s the argument the Baconians make, alleging that Bacon wanted to avoid being tainted with a reputation as a lowly playwright, but also felt compelled to pen plays that secretly took aim at the royal and political establishment in which Bacon played a key part. Supporters claim that philosophical ideas originated by Bacon can be found in Shakespeare’s works, and debate whether Shakespeare’s limited education would have provided him with the scientific knowledge, as well as legal codes and traditions, which appear throughout the plays.

They believe that Bacon provided clues behind for intrepid later scholars, concealing secret messages or ciphers about his identity as a kind of literary trail of breadcrumbs. Some have gone to even further extremes, arguing that Bacon’s ciphers reveal a larger, alternative history of the Tudor era, including what an outlandish theory that Bacon was actually Elizabeth I’s illegitimate son. 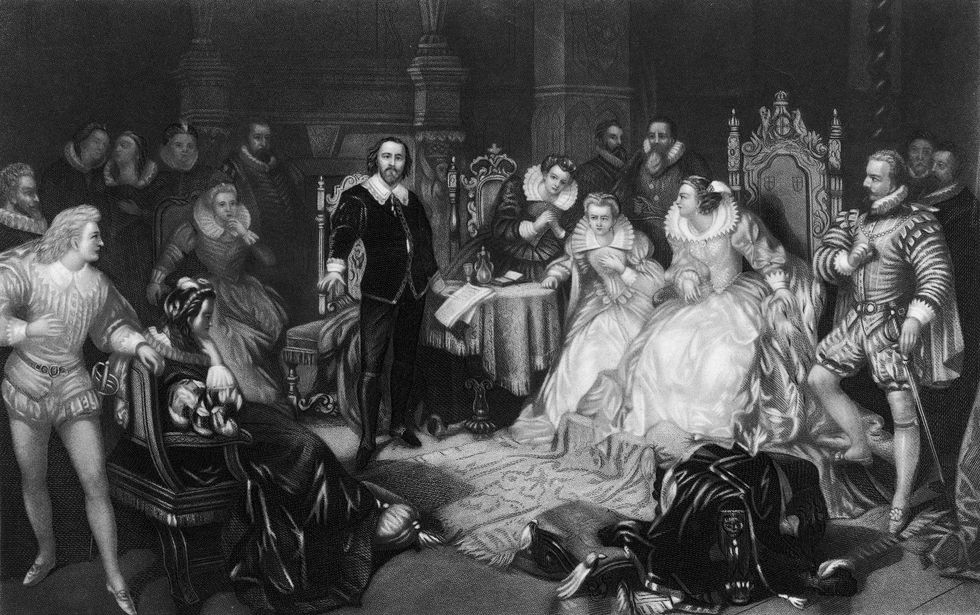 Shakespeare reciting work before the court of Elizabeth I.
Photo: Archive Photos/Getty Images

Edward de Vere, the 17th Earl of Oxford, was a poet, dramatist and patron of the arts, whose wealth and position made him a high-profile figure in Tudor times (he was raised and educated in the household of Elizabeth I’s chief advisor, William Cecil). De Vere stopped publishing poetry under his own name shortly after the first works attributed to Shakespeare appeared, leading Oxfordians to claim that he used Shakespeare as a “front” to protect his position. They argue that an annual royal annuity De Vere received from court may have used to pay Shakespeare, allowing De Vere to maintain public anonymity.

For these supporters, De Vere’s extensive travel throughout Europe, including his deep fascination with Italian language and culture, are reflected in the numerous Italian-set works in the Shakespeare canon. De Vere also had a lifelong love of history, particularly ancient history, making him well-suited to write dramas such as Julius Caesar. They also point to his family relationship to Arthur Golding, the author of a translation of the ancient Roman poet Ovid’s “Metamorphosis,” a translation which literary scholars agree was highly influential on whoever wrote the Shakespeare works.

A chief criticism of the Oxford theory is that De Vere died in 1604 — but the accepted Shakespeare chronology indicates that more than a dozen works were published after his death. Despite this and other inconsistencies, De Vere’s defenders remain steadfast, and the Oxfordian theory was explored in the 2011 film, Anonymous.

Another contender is Christopher Marlowe

A celebrated playwright, poet and translator, Marlowe was a star of the Tudor age. His work undoubtedly influenced a generation of writers, but could he also have been the true author of Shakespeare’s works in addition to his own? Supporters of the Marlovian theory, first popularized in the early 19th century, argue that there are significant similarities in the two writing styles that cannot be overlooked, although modern analysis has called this into dispute.

Like Shakespeare, Marlowe was from a modest background, but his intellectual ability saw him awarded both Bachelor and Master’s degrees from Cambridge University. Historians now believe he balanced his literary career with a clandestine role as a spy for the Tudor court. Marlowe’s support for anti-religious groups and publication of what was deemed an atheist work left him in a precarious and dangerous position.

Marlowe’s mysterious death in May 1593 has led to centuries of speculation. Although a coroner’s inquest conclusively concluded he had been stabbed during an argument in a pub, conspiracies swirl that his death was faked. Possibly to avoid an arrest warrant for that anti-religious writing. Or to help hide his role as Cecil’s secret agent. Or, as the Marlovians believe, to allow Marlowe to assume a new literary career as Shakespeare, whose first work under that name went on sale two weeks after Marlowe’s death.

Several women have also been forward as potential candidates

In the 1930s, author Gilbert Slater proposed that Shakespeare’s work may not have been written by a well-educated nobleman — but by a well-educated noblewoman. Drawing on what he saw as feminine attributes to subject matter and writing style, as well as the long list of strong, convention-breaking female characters, Slater declared that Shakespeare had likely been a front for Mary Sidney. The sister of poet Philip Sidney, Mary received an advanced classical education, and her time spent at the court of Elizabeth I would have provided ample exposure to the royal politics that played such a key role in Shakespeare’s work.

Mary was an accomplished writer, completing a highly praised translation of religious works, and several “closet dramas” (plays written for private or small-group performances), a format frequently used by women of the era who were unable to openly participate in the professional theater. Mary was also a noted arts patron, running a prominent literary salon that counted poets Edmund Spenser and Jonson among its members and providing funds to a theater company that was one of the first to produce Shakespeare’s plays.

More recently, Emilia Bassano has been the focus of renewed research. The London-born daughter of Venetian merchants, Bassano was one of the first English women to publish a volume of poetry. Historians believe Bassano’s family were likely converted Jews, and the inclusion of Jewish characters and themes, treated in a more positive way than by many other authors of the day, could be explained by Bassano’s authorship. So, too, could the frequent settings in Italy, particularly Venice, with which Bassano obviously had close ties.

Emilia was an uncommon name in Tudor-era England but is used frequently for Shakespeare’s female characters, as are variations of her last name. Some also point to autobiographical details of Bassano’s life, including the visit to Denmark of members of the household she was raised, a setting made famous in Hamlet. She was the mistress of one of the key patrons of Shakespeare’s acting company, which likely brought her in contact with the Bard, and some have surmised that she may have been his mistress.

Mark Twain argued the case for Bacon in a short work, “Is Shakespeare Dead?” and his close friend Helen Keller concurred. Sigmund Freud wrote a letter supporting the Oxfordian claim, and even fellow poet Walt Whitman chimed in, raising his doubts that Shakespeare had the education and background to produce the works attributed to him.

Modern-day Anti-Stratfordians include those who perform Shakespeare’s words, including actors Michael York, Derek Jacobi, Jeremy Irons, and Mark Rylance, a former artistic director of London’s reconstructed Shakespeare’s Globe Theater and the author of a book championing Bacon as the true author. The debate has even attracted the attention of two former U.S. Supreme Court Justices, with Sandra Day O’Connor and John Paul Stevens among the luminaries signing a petition put forward by the Shakespeare Authorship Coalition.