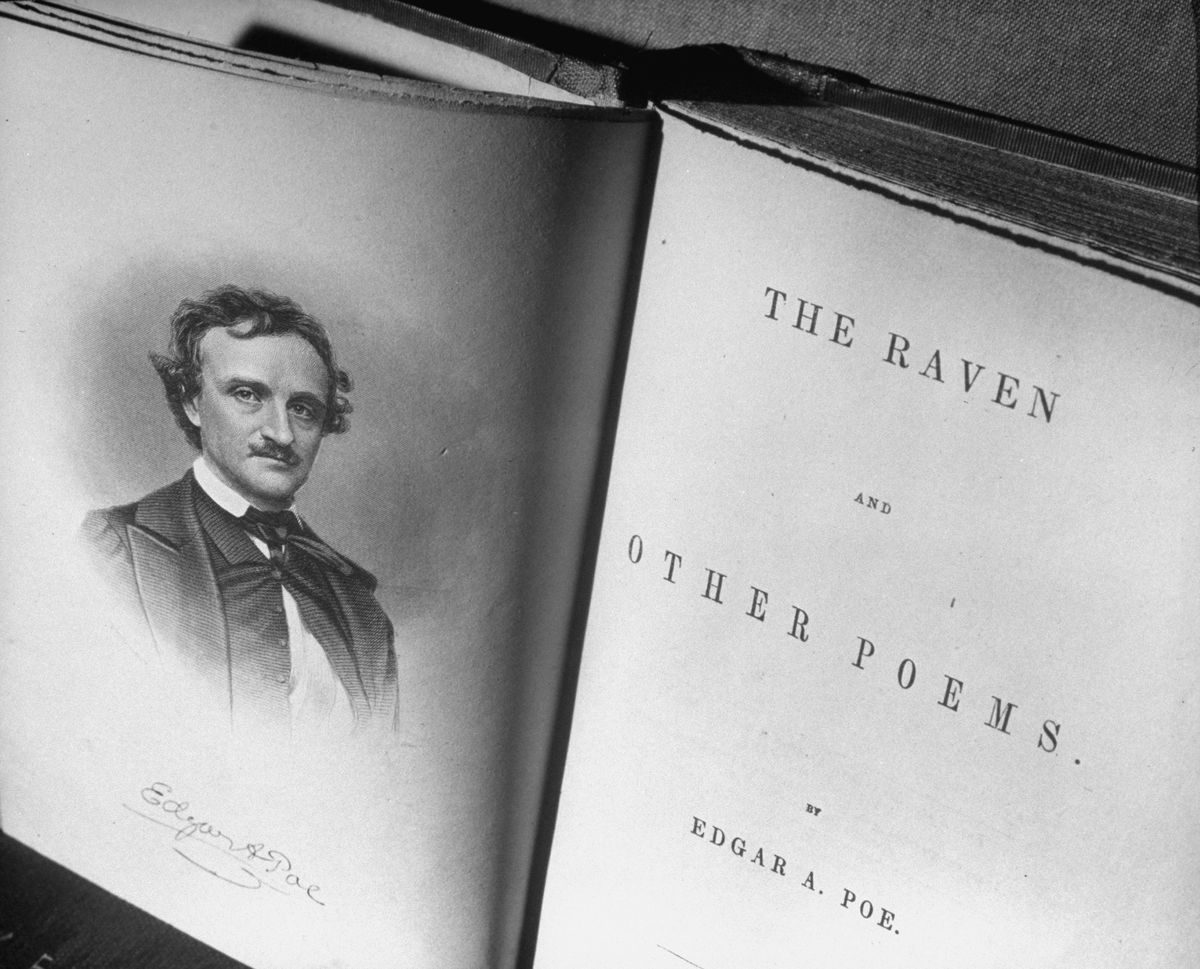 With the repetition of one haunting word — "nevermore" — Edgar Allan Poe's 1845 narrative poem, "The Raven," permeated readers' collective consciousness and solidified the legendary American writer's place as a master of the macabre. At just more than 100 lines, the relatively short work didn't need length to make an enormous impact either. Upon its publication in The New York Mirror, the story instantly made Poe a household name and even earned him the nickname "The Raven." According to various reports, children began to follow Poe through the streets cawing and flapping their arms and then quickly run away when the author would turn around and exclaim, "Nevermore!"

At its heart, "The Raven" is a tale of grief and loss — and a descent into insanity — as the distraught protagonist is visited by a taking bird while mourning the death of his love, Lenore. Ironically, the poem (and Poe himself) remain immortal. As of 2018, the Boston-born writer, who died just five years after "The Raven" was published, has more than 350 writing credits on IMDB, thanks to the endless references made to his works and attempts to "Quoth the raven" in popular culture.

Here are 10 of the most standout examples to date: 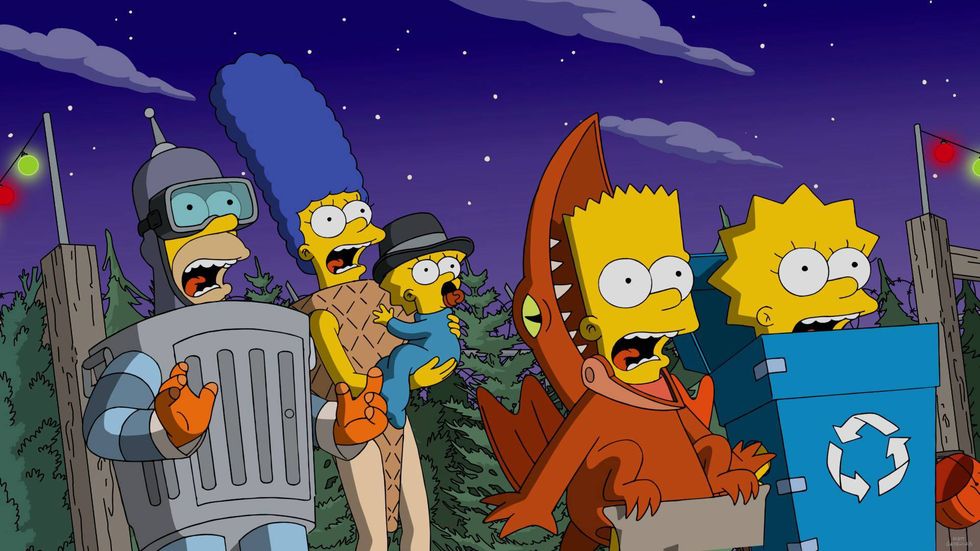 In the inaugural 1990 installment of the animated sitcom's annual Halloween-themed "Treehouse of Horror" episodes, Lisa Simpson reads Poe's story to her siblings Bart and Maggie. As it plays out on screen, Bart transforms into the titular bird and dad Homer takes on the protagonist role with Emmy winner James Earl Jones lending his unmistakable bellowing voice to convey his thoughts. (Simpson family matriarch Marge also appears in a painting as the late Lenore.) Many see the retelling as a faithful take on the iconic poem — with a few exceptions. For example, the raven uses Bart's famous catchphrase "Eat my shorts," in place of "Nevermore" in one instance.

Fans of the football team took a page from Poe when naming the squad in 1996. The literary reference in honor of the writer, who once lived, died and is now buried in Baltimore, Maryland, overwhelming won a voting contest with more than 33,000 fans participating. Today, the two-time Super Bowl champs have one costumed mascot named Poe, but up until 2008, there were two additional raven mascots: Poe's brothers Edgar and Allan.

Poe has been referenced numerous times throughout the DC Comic's history and even once appeared as a character trying to take down the Dark Knight. In 1989's Batman film, which starred Michael Keaton as the caped crusader, Jack Nicholson's villainous Joker quoted a line from "The Raven," telling Vicky Vale (played by Kim Basinger), "Take thy beak from out my heart."

Nineties band Blues Traveler won their first Grammy Award — "Best Rock Vocal Performance by a Duo or Group" — with their 1994 breakout hit "Run-Around." While there's some argument whether the band sings the word "dreary" or "dearie," the first line of the song closely, if not identically, mirrors "The Raven's" opening sentence: "Once upon a midnight dreary, I woke with something in my head."

The 2001 comedy sequel features a scene in which actor Eddie Murphy's title character, a veterinarian who can communicate with animals, holds a meeting to discuss how the creatures can save a forest. Incensed by a bear named Archie's perceived idiocy, a raven flies from the doctor's cabin, squawking, "Nevermore."

The crime drama used "The Raven" as a theme throughout its three-season run from 2013 until 2015. As early as the first episode, Kevin Bacon (as a former FBI agent) arrives at a gruesome crime scene where the word "nevermore" is written in blood on a wall. The perpetrator, a literature professor turned serial killer named Joe Carroll (played by James Purefoy), forms a murderous Poe-inspired cult, and his last words in the series' finale were: "Quoth the raven... Nevermore."

Season 6 of the supernatural teen television series included multiple references to "The Raven." The most notable among them was a 2017 episode titled "Ghosted" in which the main characters encounter a mysterious woman named Lenore (played by McNally Sagal) who, like the poem's protagonist, suffers from delusions in the wake of losing a loved one.

The 1980s comedy spinoff of Vicki Lawrence's popular Carol Burnett Show sketch "The Family," featured an Edgar Allan Poe High School that used ravens as its mascot. In one episode, husband and wife Vint and Naomi Harper reveal the school's fight song: "Go! Go! Go! Edgar Allan Poe! We will leave'em weak and weary, we will give'em midnight dreary. Will they ever top our score? Quoth the raven, Nevermore!"

Author Keith R. A. DeCandido's 2007 novel is the first in a book series based on the dark fantasy television show Supernatural. The plot follows main characters Sam and Dean Winchester (portrayed on TV by Jared Padalecki and Jensen Ackles, respectively) investigating murders inspired by several of Poe's short stories, including 1843's "The Tell-Tale Heart and "1846's"The Cask of Amontillado."

Another depiction of a murderer taking cues from Poe's writing, the 2012 psychological crime thriller, which starred John Cusack as Poe, is perhaps the most on-the-nose pop culture reference to the classic. Despite sharing a name with the narrative poem, the film follows a completely different plot, giving a fictionalized account of the events leading to Poe's death.