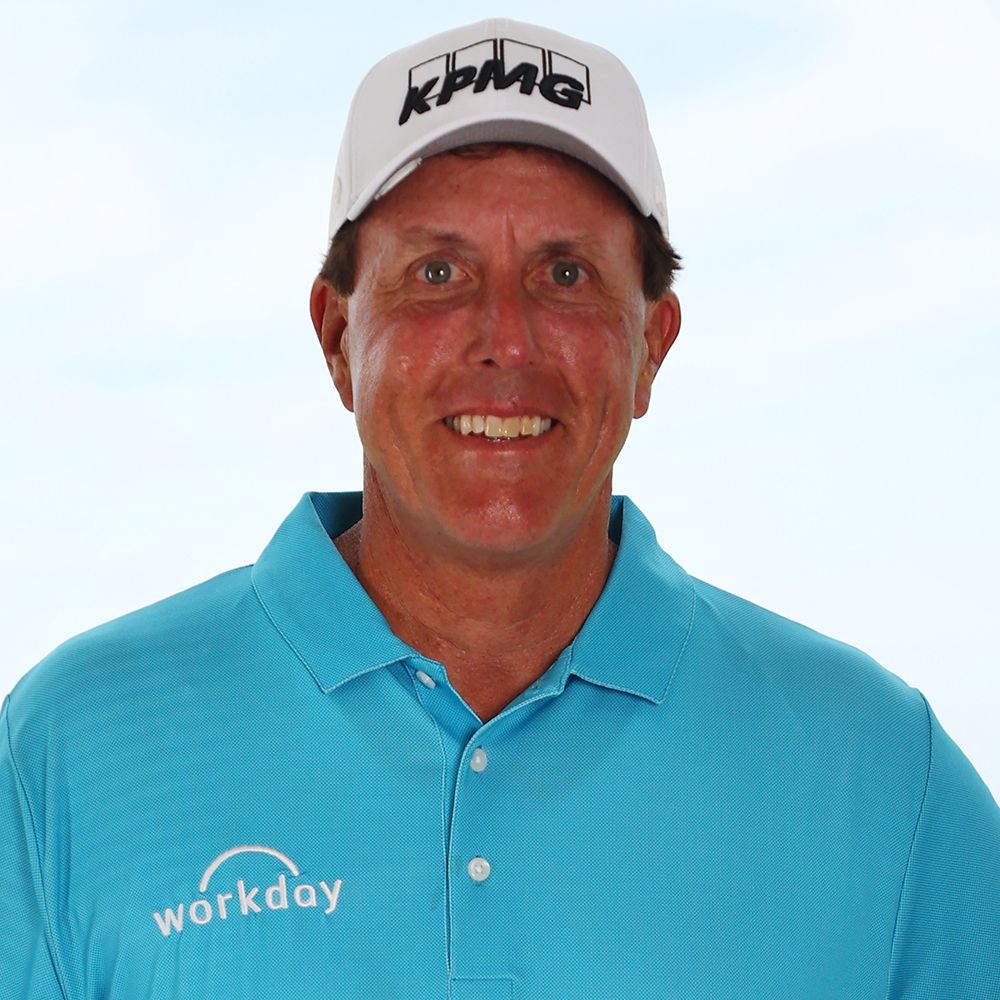 Who Is Phil Mickelson?

Phil Mickelson showed immense interest in golfing as a toddler. His career began in earnest when he was at Arizona State, where he won three NCAA individual championships, before turning pro at age 22. Long known for his inability to win a major despite his elite skills, "Lefty" finally got the monkey off his back with a dramatic victory at the 2004 Masters, and went on to claim four more major championships over the following decade.

Philip Alfred Mickelson was born on June 16, 1970, in San Diego, California. Mickelson's career in golf began around the time he could walk. His parents, Phil and Mary, have often recounted the story of a young Mickelson running away from home at the age of three, telling neighbors he was going to the golf course.

Mickelson began an amateur golfing career as a teen. He won 34 San Diego Junior Golf Association titles, using his father's job as an airline pilot to score tickets to his various tournaments. His mother took a second job to help pay for his American Junior Golf Association play, which won him three consecutive AJGA Rolex Player of the Year awards, and a full scholarship to Arizona State University.

Mickelson graduated from the University of San Diego High School in 1988, and headed to Arizona State University to study psychology. During his time at Arizona State, Mickelson jumped to the top of the national amateur golfing ranks. He won three NCAA individual championships and three Haskins Awards for outstanding collegiate golfer, and became only the second collegiate golfer to earn first team All-American honors all four years.

In 1990, while a junior in college, Mickelson became the first left-hander to win the U.S. Amateur title. That same year, he stunned critics when he won his first PGA Tour tournament as an amateur, becoming the fourth golfer in PGA history to accomplish this feat.

Mickelson earned his bachelor's degree from ASU after his 1991 win in Tucson. In 1992, on the eve of his 22nd birthday, he turned professional.

Mickelson's first title as a pro came in 1993 at Torrey Pines, and over the following decade, "Lefty" continued carving out his place among the best in the sport. He won the Byron Nelson Golf Classic and the World Series of Golf in 1996; the AT&T Pebble Beach National Pro-Am in 1998; and the Colonial National Invitation in 2000. That year he also claimed the Buick Invitational, defeating favorite Tiger Woods and ending the golf icon's streak of consecutive tournament victories.

Despite his consistently strong play, Mickelson was unable to get over the hump in the sport's biggest tournaments, leaving him with the unofficial "best player to never win a major" designation. But the big moment finally came at the 2004 Masters, when the 33-year-old birdied five of the final seven holes, including No. 18, to pull out a one-stroke win over Ernie Els. "It's hard for me to explain how it feels," said the elated golfer afterward. "It's almost make-believe."

It didn't take Mickelson nearly as long to return to the winner's circle in major tournaments, as he claimed the 2005 PGA Championship and notched a second Masters win in 2006. In 2007, Forbes estimated his earnings for the year at $42 million, making him one of golf's highest-paid players.

Lefty continued adding to his trophy collection with wins at the 2007 Players Championship and the 2009 Tour Championship. At the 2010 Masters, he mounted a strong charge on the back nine of the third round, before pulling away on the final day to earn his third green jacket. Two years later, he was inducted into the World Golf Hall of Fame.

On the verge of another major win, Mickelson sputtered toward the end of the 2013 U.S. Open, leaving him with his sixth runner-up finish in the event. However, there was no slowing the veteran champ over the final round of the British Open the following month, when he birded four of the last six holes to surge to victory. "I've had some of the best golf I've ever played today," he told ESPN afterward. "It will be one of the most memorable rounds of golf I've ever played."

In May 2021, Mickelson made history when he won the PGA Championship at age 50, becoming the oldest winner of a major golf championship ever.

Following a winless 2014, Mickelson placed second at the 2015 Masters, the 10th time he had done so in a major competition. However, adding to his career haul of 42 PGA titles would prove to be one of the biggest challenges of his career.

Mickelson began working with a new swing coach late in 2015, displaying positive results with a second-place finish at the AT&T Pebble Beach Pro-Am and a third-place showing at the British Open in 2016. However, his momentum was slowed when he twice underwent surgery for a sports hernia late in the year.

The golfer finally ended his dry spell in March 2018 by defeating Justin Thomas in a playoff to claim the WGC-Mexico Championship. "This is a very meaningful win," he said afterward. "I can't really put it into words given the tough times over the last four years and the struggle to get back here."

Eleven months later, Lefty enjoyed the taste of victory once again following a final-round 65 at the 2019 AT&T Pebble Beach Pro-Am. It was his fifth career win in the event, tying the record held by Mark O'Meara.

In August 2018, it was announced that Mickelson and his longtime rival, Woods, would square off in a televised, one-on-one showdown in Las Vegas on November 23. Billed as a winner-take-all match for $9 million, Mickelson said they were considering adding a series of in-match challenges that included longest drive, closest to the hole, longest putt and closest out of a bunker.

"It's an opportunity for us to bring golf to the masses in prime time during a period where we don't have much going on in the world of golf," said Mickelson, adding that they expected to wear microphones so fans could hear their banter.

The banter didn't quite materialize as expected, with both players concentrating on their shots, but Mickelson ultimately claimed the prize money and bragging rights by sinking a birdie on the 22nd and final hole.

Mickelson and Woods squared off again in "The Match: Champions for Charity" in May 2020, with NFL legends Tom Brady and Peyton Manning joining the fun. This time, the Mickelson-Brady pairing lost to Woods and Manning, though the event was a major success with $20 million raised for coronavirus relief efforts.

In 1996 Mickelson married Amy McBride, a fellow ASU alum and a cheerleader for the NBA's Phoenix Suns. The couple went on to have three children: Amanda, Sophia and Evan. Amy was diagnosed with breast cancer in 2009 but recovered enough from treatments to root on Mickelson's 2010 Masters win in person.