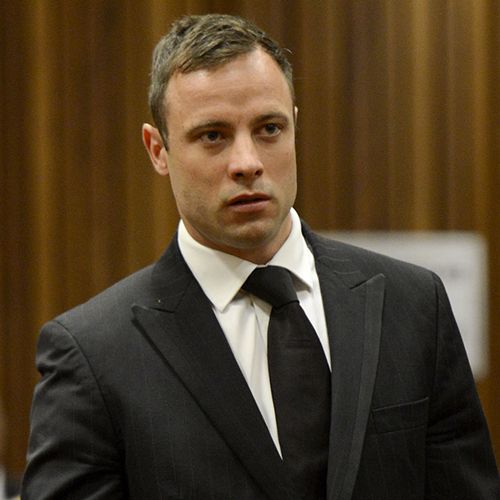 Who Is Oscar Pistorius?

Oscar Pistorius is a South African sprinter, nicknamed the "Blade Runner," who endured the amputation of both legs as an infant but still became highly active in sports. He took up running at age 16, and within a few months, he had captured gold at the 2004 Athens Paralympics. Pistorius began competing against able-bodied athletes, and in 2012, made history as the first amputee to compete in track events at the Olympics. The following year, Pistorius was arrested for killing his girlfriend, Reeva Steenkamp, at his home.

Oscar Leonard Carl Pistorius, the first amputee athlete to compete in the Olympics, was born on November 22, 1986, in Johannesburg, South Africa. The son of Henk and Sheila Pistorius, Oscar Pistorius was the middle child of three. His family, while prominent in South Africa, lived a largely middle-class lifestyle.

Pistorius' childhood was shaped partly by tragedy. His parents divorced when he was six, a fact that largely contributed to a strained relationship between Pistorius and his father, a businessman. His mother died when he was 15, the result of drug complications following a hysterectomy. Pistorius's own physical health was marred at birth. Born without a fibula in either of his legs, his parents made the difficult decision to have their son's legs amputated below his knees just before his first birthday.

Within six months, Pistorius was walking successfully with a pair of prosthetic legs. His handicap hardly slowed his involvement in sports, which spanned from cricket to wrestling to boxing.

It wasn't until he was 16 and in need of a sport that could help him rehab a knee injury sustained in a rugby match, that Pistorius was introduced to track. His rise in the sport came quickly. In January 2004, he competed in his first 100-meter race; nearly eight months later, Pistorius, wearing a pair of Flex-Foot Cheetahs, a lightweight carbon fiber foot, captured the gold medal in the 200-meter race at the 2004 Athens Paralympics.

However, the runner's artificial legs became a source of controversy. In 2007, the International Association of Athletic Foundations (IAAF) banned Pistorius from competing, stating that his artificial legs gave him an unfair advantage over able-bodied athletes. Pistorius immediately appealed the ruling, and in May 2008 the Court of Arbitration for Sport overturned the IAAF decision.

After missing the cut for the 2008 Summer Olympics in Beijing, a determined Pistorius focused his training on making the 2012 Summer Olympic Games in London. Along the way, Pistorius, nicknamed "Blade Runner" and also called the "fastest man on no legs," captured three gold medals at the 2011 IPC Athletic World Championships. Two more titles followed, in the 400-meter and 100-meter events at the BT Paralympics World Cup.

In spring 2012, Pistorius realized his ultimate dream when he qualified for the 400-meter race at the London Olympics. While he was eventually eliminated in the semifinal round, he secured his place in history by becoming the first amputee athlete to compete in track events at the Olympics. To mark the occasion, Pistorius flew out his 89-year-old grandmother to watch him race. "It's just an unbelievable experience," Pistorius said shortly after his first Olympic race. "I found myself smiling on the starting blocks, which is very rare."

The track star made headlines of a different kind in February 2013, after his girlfriend, South African model Reeva Steenkamp, was found dead at his home in Pretoria, South Africa. According to police, Steenkamp was shot and killed on the morning of February 14, 2013, with bullet wounds to the head and one arm. Pistorius was soon named a suspect in the case.

Five days after Steenkamp's death, on February 19, 2013, during a hearing at the Magistrate Court in Pretoria, Pistorius admitted to unintentionally shooting Steenkamp at his home on Valentine's Day. He went on to state that he had mistaken his girlfriend for an intruder and shot her through a locked bathroom door. Consequently, Pistorius faced a charge of premeditated murder that would result in a mandatory life sentence in the event of a guilty verdict.

On March 3, 2014, the trial for Pistorius began. In addition to being charged with premeditated murder, Pistorius also faced two separate gun indictments from incidents unrelated to the death of his girlfriend. He pleaded not guilty to all charges. Pistorius claimed that he was frightened in his home at the noise of an unknown intruder, which caused him to shoot at the bathroom door when coupled with his vulnerable state of mind without his prosthetic legs.

Pistorius's neighbor Michelle Burger testified that she heard a "blood-curdling" scream from a woman on the night of the murder, followed by a man yelling for help three times. Burger also claimed to have heard gunshots. Prosecutors within the trial accused Pistorius of having argued with Steenkamp on the night of the murder, resulting in her locking herself in the toilet.

As the trial progressed, Pistorius took the stand to defend himself. He first offered his apologies to Steenkamp's family before continuing to claim that he shot her by accident. During his testimony, Pistorius broke down into tears. Some observers were not swayed by this show of emotion. Reports later surfaced that he had taken acting lessons before his court appearance, but Pistorius denied these claims.

After a recess of a few weeks, the trial resumed in May. Pistorius's lawyers called a psychiatrist to testify that Pistorius suffered from a "generalized anxiety disorder," according to the Los Angeles Times. This condition was introduced as a possible influence on Pistorius and his deadly actions. Judge Thokozile Masipa then called for another delay in the trial for Pistorius to undergo a full mental health examination by a team of psychiatrists.

Pistorius was determined to not have an anxiety disorder, according to the psychological report released in late June. His trial soon resumed and carried on for several more weeks before both sides presented their closing arguments. On September 11, Judge Masipa declared that Pistorius was not guilty of premeditated murder. However, Pistorius was later found guilty of culpable homicide, and in October, he was sentenced to five years in prison.

On October 19, 2015, Pistorius was released from prison and placed under house arrest and correctional supervision for four years. In a speech given at Steenkamp’s former school in Port Elizabeth, her mother, June, said she had to forgive to move on with her own life: “I didn’t want him to be thrown in jail and be suffering because I don’t wish suffering on anyone, and that’s not going to bring Reeva back.”

On December 3, 2015, the top appeals court in South Africa ruled that Pistorius was guilty of first-degree murder of Steenkamp. The court believed that a misinterpretation of laws combined with a dismissal of circumstantial evidence had caused prosecutors to offer the lesser charge of culpable homicide in 2014.

On the charge of first-degree murder, Judge Eric Leach said: “I have no doubt that, in firing the fatal shots, the accused must have foreseen, and therefore did foresee, that whoever was behind the toilet door might die, but reconciled himself to that event occurring and gambled with that person’s life. ... The identity of his victim is irrelevant to his guilt.”

On July 6, 2016, Judge Masipa sentenced Pistorius to six years in prison for Steenkamp's murder. However, this sentence was condemned by the South African National Prosecuting Authority, on the grounds that it was far too lenient and "disproportionate to the crime." In September 2017, it was announced that the Supreme Court of Appeal would hear the state's argument against the six-year murder sentence, with a court date scheduled for November 3.

On November 24, 2017, shortly after Lifetime aired its original movie Oscar Pistorius: Blade Runner Killer, starring Andreas Damm and Toni Garrn, South Africa's Supreme Court of Appeal handed down a new sentence of 13 years and five months to the fallen sporting hero. Upon delivering the verdict, Supreme Court Justice Willie Seriti noted that Pistorius failed to explain in multiple court hearings why he fired the fatal shots and did not seem genuinely remorseful. "The sentence of six years' imprisonment is shockingly lenient to a point where it has the effect of trivializing this serious offense," he said.

In response, the Steenkamp family lawyer said her clients "feel there has been justice for Reeva. She can now rest in peace." At the time, it was unclear whether Pistorius planned to appeal the sentence to the South Africa Constitutional Court.