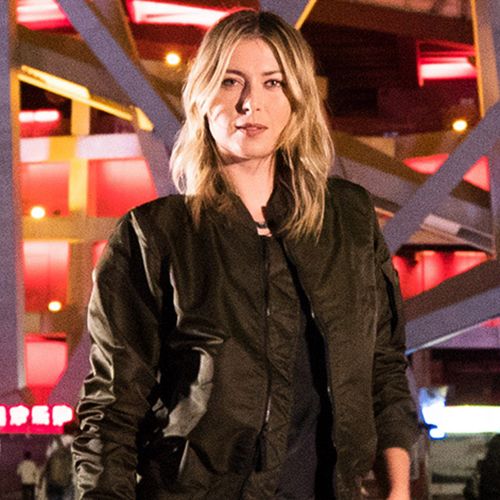 Who Is Maria Sharapova?

Born in Russia, Maria Sharapova moved to the United States at an early age and began training at the Nick Bollettieri Tennis Academy. After turning professional as a teen, she burst into the spotlight by winning the 2004 Wimbledon women's singles title. Sharapova became the 10th woman to earn a career Grand Slam with her French Open win in 2012, and she claimed her second French crown and fifth overall Grand Slam title in 2014. Suspended for 15 months after testing positive for a banned substance, Sharapova returned to the court in April 2017 and won her final WTA title later that year. She announced her retirement in February 2020.

Sharapova was born on April 19, 1987, in Nyagan, Siberia, Russia. After learning to play tennis as a young child, she moved with her father to Florida, earning a scholarship to train at the Nick Bollettieri Tennis Academy at age nine.

Long-limbed and powerful, Sharapova showed immense promise on the competitive circuit. She turned professional on her 14th birthday but continued to compete among her peers, finishing runner-up at the junior Wimbledon and French Open tournaments in 2002.

Sharapova claimed her first WTA victory at the 2003 AIG Japan Open and also reached the fourth round at Wimbledon on her first attempt during the same year. Success came the following year when she won the singles title at Wimbledon, becoming Russia's first female Wimbledon champion. At the end of 2004, she added a WTA Championships title to her list of achievements.

Sharapova became the first Russian woman to ascend to the sport's top ranking in 2005, and the following year she claimed her second Grand Slam title with a win at the U.S. Open.

The tennis star was slowed by shoulder problems for much of 2007 and 2008, although she managed to win her third Grand Slam with a dominant showing at the 2008 Australian Open. She finally underwent shoulder surgery that October, and the resulting layoff forced her out of the Top 100 until her return to singles action in May 2009.

Sharapova struggled to regain her consistency against the premier women's players, but she was back in the Top 20 by the end of 2009, and finished 2011 ranked No. 4 in the world. In June 2012, Sharapova capped her comeback by defeating Sara Errani in the French Open final. The victory made her just the 10th woman to complete a career Grand Slam (wins at all four major tournaments) and allowed her to regain the world's No. 1 ranking. 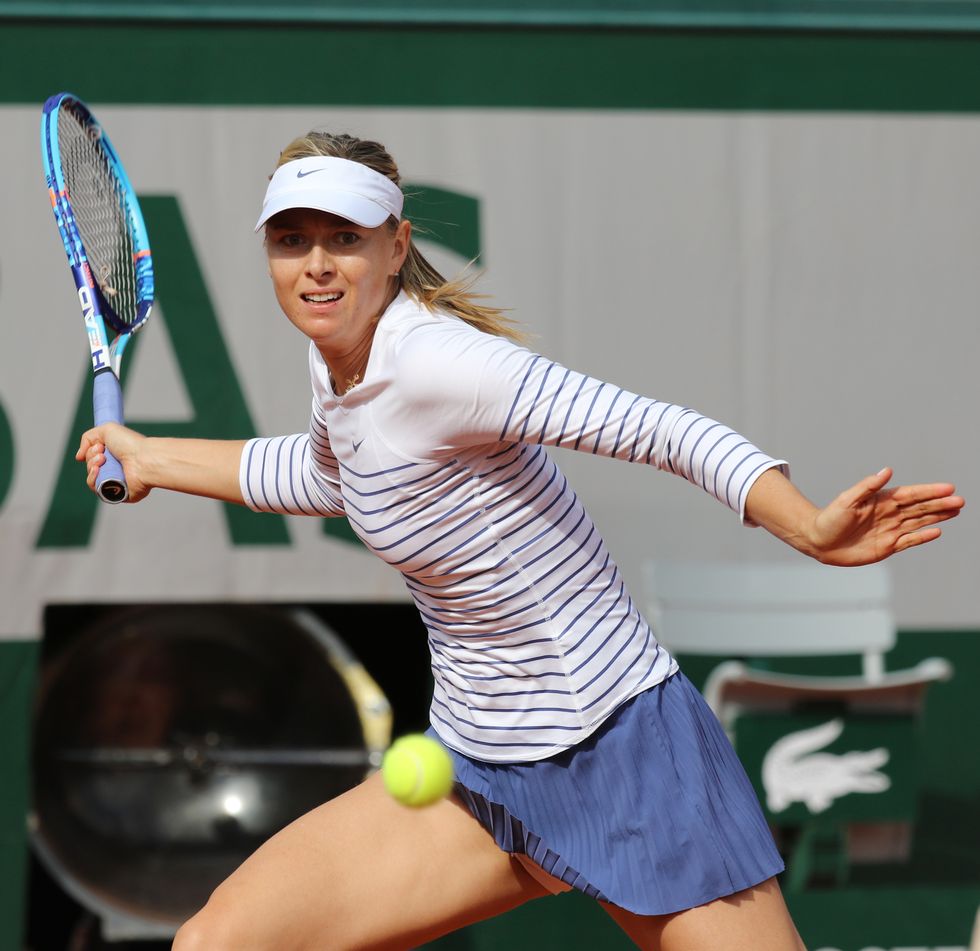 At the 2012 Summer Olympic Games — Sharapova's Olympic debut — she won a silver medal in women's singles, losing the gold to American tennis star Serena Williams. The Russian continued to play well in subsequent majors, finishing runner-up at the 2013 French Open. However, shoulder problems again took a toll, and not long after a disappointing second-round loss at Wimbledon, she withdrew from action for the remainder of the season.

Regaining momentum in 2014, Sharapova won her second French Open and fifth overall Grand Slam title by defeating Simona Halep. In 2015, she advanced to the Australian Open final and the semifinals of the U.S. Open, before finishing the year ranked No. 4.

In March 2016, Sharapova announced that she had failed a drug test at the Australian Open in January. At a press conference, the tennis star said that she had tested positive for Mildronate, with an active ingredient of meldonium, which she had been taking for health issues since 2006. The drug was added to the World Anti-Doping Agency's (WADA) prohibited list on January 1, 2016.

"It's very important for you to understand that for 10 years this medicine was not on WADA's banned list and I had been legally taking the medicine for the past 10 years," Sharapova said at the press conference. "But on January 1 the rules had changed and meldonium became a prohibited substance, which I had not known."

“I have to take full responsibility for it,” she added. “It’s my body, and I’m responsible for what I put into it.”

On June 8, 2016, an independent tribunal appointed by the International Tennis Federation (ITF) suspended Sharapova from playing for two years because of the failed drug test.

Sharapova responded in a Facebook post: "While the tribunal concluded correctly that I did not intentionally violate the anti-doping rules, I cannot accept an unfairly harsh two-year suspension. The tribunal, whose members were selected by the ITF, agreed that I did not do anything intentionally wrong, yet they seek to keep me from playing tennis for two years. I will immediately appeal the suspension portion of this ruling to CAS, the Court of Arbitration for Sport.”

In October 2016, after Sharapova appealed her two-year suspension, the Court of Arbitration for Sport announced that her punishment would be reduced to 15 months, allowing her to return to international competition in April 2017. “I’ve gone from one of the toughest days of my career to, now, one of the happiest days,” the tennis player said in a statement.

At the conclusion of her suspension, Sharapova returned to action at the Porsche Tennis Grand Prix on April 26, 2017. She won her first WTA title in two years at the Tianjin Open in October, and battled her way back into the sport's Top 30 in 2018, her quarterfinal showing at the French Open among the year's highlights.

But the erstwhile champion struggled to remain competitive after advancing to the fourth round of the 2019 Australian Open, her performance hindered by nagging physical problems. On February 26, 2020, one month after her first-round loss at the Australian Open, Sharapova announced her retirement in a Vanity Fair essay.

"Looking back now, I realize that tennis has been my mountain," she wrote. "My path has been filled with valleys and detours, but the views from its peak were incredible. After 28 years and five Grand Slam titles, though, I’m ready to scale another mountain — to compete on a different type of terrain."

Off the court, Sharapova landed major commercial endorsements with Nike, Avon, Evian, TAG Heuer, Porsche and Tiffany & Co., among other companies. She was the world's highest-paid female athlete for several years, with Forbes estimating her career earnings at $325 million at the time of her retirement.

After the March 2016 announcement that Sharapova had failed a drug test, sponsors including TAG Heuer and Porsche suspended their relationships with the tennis star. Other sponsors like Nike, Evian and the racket manufacturer Head continued their support of Sharapova.

Sharapova's other business ventures include the 2012 launch of the Sugarpova candy line with Jeff Rubin, the founder of IT'SUGAR. A portion of the sales are donated to the Maria Sharapova Foundation to support her charitable causes.

“It started when I was a little girl in Russia, and my dad would reward me with a lollipop or chocolate after a long day of practice,” she wrote on the Sugarpova website. “It stood out to me then — and still today — that there’s no reason why hard work can’t be rewarded with a little sweet treat. Because the key to a happy, healthy life for me is this idea of Moderation in Moderation — you can 100% have your cake (or candy) and enjoy it, too.”

In her personal life, Sharapova began a relationship with Slovenian basketball player Sasha Vujacic in 2009, the two getting engaged the following year. However, during a post-match conference at the 2012 U.S. Open, Sharapova announced that the engagement was off and that her relationship with Vujacic had ended. Afterward, she dated Bulgarian tennis pro Grigor Dimitrov from 2013 to 2015. She has been linked to Paddle8 co-founder Alexander Gilkes since 2018 and the pair got engaged in December 2020.