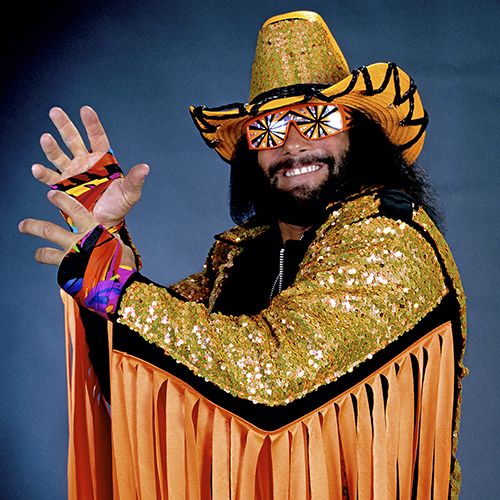 Who Was 'Macho Man' Randy Savage?

The son of pro wrestler Angelo Poffo, Randy Savage pursued a career as a professional baseball player before turning to his father's sport in the 1970s. The "Macho Man" emerged as a WWE superstar in the mid-1980s, winning several titles while drawing attention for his dazzling costumes, his signature "Oh yeah!" growl and his relationship with his manager, Miss Elizabeth. Savage later competed in the rival WCW for much of the 1990s and was posthumously inducted into the WWE Hall of Fame in 2015.

Savage was born Randall Mario Poffo on November 15, 1952, in Columbus, Ohio. The older son of Angelo Poffo, a highly accomplished pro wrestler in his own right, Savage attended a series of schools as his father pursued his career through the sport's North American territories before the family settled in Downers Grove, Illinois.

According to his mother, Judy, Savage was a restless student but generally well-liked, even protecting other students from school bullies. He also excelled in multiple sports, particularly baseball, and signed with the St. Louis Cardinals organization after high school.

Playing the physically demanding position of catcher, Savage sustained a shoulder injury that affected his ability to throw. He learned to throw with his other arm but struggled to hit, and pulled the plug on his big-league baseball hopes in 1975.

Meanwhile, Savage had embarked on another path to stardom with his professional wrestling debut in 1973. Initially known as "The Spider," he adopted his famous surname after Georgia Championship Wrestling's Ole Anderson suggested a moniker to reflect his "savage" style. The "Macho Man" designation came from his mom, while younger brother Lanny recommended that he imitate the grunting, snarling sound bites of wrestler Pampero Firpo.

In the late 1970s, Savage teamed with his dad and brother to launch International Championship Wrestling out of Lexington, Kentucky. Although their startup struggled to compete with the region's established promotions, Savage succeeded in drawing attention with his aggressive ring persona, and by the early 1980s, he had developed a reputation as one of the top wrestlers of the Southeastern territories.

Savage joined World Wrestling Entertainment in June 1985, his arrival marked by a competition for his services among ring managers like Bobby "The Brain" Heenan and Jimmy Hart, before the newcomer introduced the glamorous Miss Elizabeth as his manager later that summer.

Macho Man quickly became known for entering matches to the highbrow arrangements of "Pomp and Circumstance," his flamboyant costumes and his signature "Oh yeah!" growl, his controlling interactions with Miss Elizabeth and brash challenges to other stars making him a top WWE villain.

Presented as the leading foil to popular champion Hulk Hogan, Savage showcased his own championship skills by claiming the Intercontinental title in late 1985 and retaining the belt until an epic loss to Ricky "The Dragon" Steamboat at Wrestlemania III in 1987. He then emerged as WWE champion at Wrestlemania IV and briefly formed the "Mega Powers" tag-team duo with Hogan.

Shaking up the narrative, Savage took on Sensational Sherri as his manager and renamed himself "Macho King" after knocking off "Hacksaw" Jim Duggan for the King of the Ring title in 1989. He dramatically reunited with Miss Elizabeth at WrestleMania VII, however, and the couple were "married" in a 1991 SummerSlam ceremony known as the "Match Made in Heaven."

Once again calling himself Macho Man, Savage began spending more time ringside as a wrestling commentator in the early 1990s. He returned to the spotlight for a spell after defeating WWE champion Ric Flair at 1992's WrestleMania VIII but was mostly behind the microphone the following year to call Monday Night Raw matches alongside WWE CEO Vince McMahon.

Not yet ready to cede the mat to the next generation of athletes, Macho Man jumped to World Championship Wrestling in late 1993. He won the inaugural 60-man, three-ring battle royal for his first WCW championship in 1995, and defeated Flair to reclaim the title in 1996.

Following what turned out to be his final WCW match in 2000, Savage began training his sights on life outside the ring.

Along with his commercials for Slim Jim snacks, Savage appeared in TV series like Baywatch and enjoyed a small but memorable part as wrestler "Bone Saw" McGraw in the 2002 big-screen hit Spider-Man. He also made a foray into hip hop with his 2003 album, Be a Man.

Savage married Elizabeth Hulette – aka Miss Elizabeth – in December 1984, and they divorced not long after the 1991 "Match Made in Heaven." He later married former high school sweetheart Lynn Payne.

Savage died on May 20, 2011, after suffering a heart attack while driving and crashing his car into a tree.

The Macho Man's contributions to popular culture were recognized by Time magazine, which named him a Person of the Year a few months later, and he was posthumously inducted into the WWE Hall of Fame in 2015, cementing his legacy as one of pro wrestling's iconic figures.