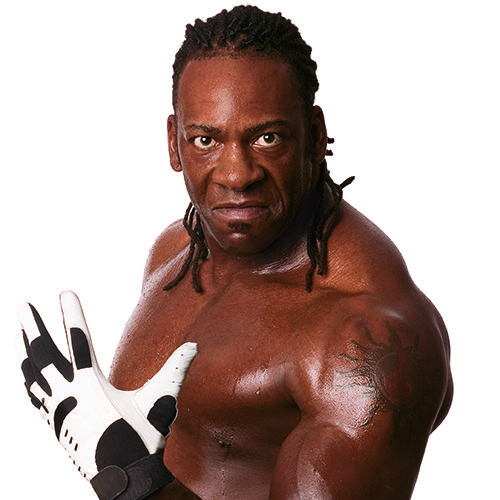 Who Is Booker T?

Booker T is a WWE wrestling superstar. Orphaned at a young age, he struggled to find his way during his teen years, and served time in prison after committing a string of robberies. Booker worked his way up from wrestling in local venues to national stardom, first with World Championship Wrestling, then WWE. He was an 11-time WCW Tag Team Champion, and as a solo wrestler, he became a six-time World Champion. In 2006 Booker won WWE's King of the Ring Tournament. After stepping back from wrestling, he worked as a commentator and trainer. He also founded his own wrestling school. He was inducted into the WWE Hall of Fame in 2013 and 2019.

Booker was born Robert Booker Tio Huffman Jr. on March 1, 1965, in Plain Dealing, Louisiana. The youngest of his mother's eight children, his father died when Booker was 10 months old. After this loss, his family relocated from Louisiana to Texas. Booker grew up in Houston's South Park neighborhood, where he developed a love of wrestling.

When Booker was 13, his mother passed away following complications during surgery. For a time Booker and his next oldest sister lived alone in their old home, even after the electricity and water had been cut off. Booker next went to stay with an older sister. He had little support or guidance as a teen. School was neglected, and he was surrounded by drug use and partying. Booker became a father at the age of 17.

Working at a Wendy's restaurant with a disagreeable manager inspired Booker and some friends to rob the fast food joint. After they successfully committed this crime, the group went on to rob other Wendy's franchises until they were arrested in 1987.

Booker took a plea deal and received a five-year prison sentence. He served 19 months, earning his GED behind bars before he was released on parole.

In 1989, Booker's brother, Lash "Stevie Ray" Huffman, talked to Booker about attending a wrestling school run by bodybuilder and wrestler Ivan Putski. Booker was interested but didn't have the required $4,000 fee. Fortunately, his boss at the storage company where he worked provided the funds.

Booker proved to be a natural for the sport. After completing the wrestling course, he and his brother worked for the Western Wrestling Alliance. When WWA closed down, Booker and his brother moved to Texas All-Pro Wrestling. They then joined Dallas's Global Wrestling Federation, where they formed a tag team known as the Ebony Experience. They made their debut on May 4, 1992.

Members of the audiences they faced felt free to hurl racist abuse, including the n-word, at the duo. However, Booker found he could win wrestling fans over with moves like his breakdance-inspired "Spinaroonie." Booker and his brother went on to win the Tag Team Championship in the Global Wrestling Federation.

Booker still had to work day jobs in between traveling to and from Dallas for the Global Wrestling Federation. His big break arrived when he and his brother were signed to World Championship Wrestling. At WCW in 1993, the brothers formed a tag team known as the Harlem Heat. The popular duo went on to be 10-time WCW Tag Team Champions.

With his brother's approval, Booker moved into singles wrestling, where his star power became even more evident. In 2000, he won the WCW World Heavyweight Championship, becoming the first Black champion since 1992. He also held the title when WCW was acquired by WWE (then known as the World Wrestling Federation) in 2001, making Booker the last WCW Heavyweight Champion.

After WCW was folded into WWE, Booker continued his wrestling career at WWE. His star rose, and he was able to show off his comedic abilities while facing renowned wrestlers like "Stone Cold" Steve Austin, The Undertaker, Triple H and Ric Flair. Booker also partnered with Goldust as a tag team.

Under the moniker King Booker, he became champion in 2006's King of the Ring Tournament. Booker left WWE in 2007 but returned to the promotion in 2011 for the Royal Rumble. In 2013, he was inducted into the WWE Hall of Fame for his solo work. In 2019, he joined the Hall of Fame once more when he and his brother were inducted for their accomplishments as the Harlem Heat.

Booker retired from wrestling in 2012. He next became a color commentator for WWE's SmackDown and served as the General Manager for SmackDown. In addition, Booker appeared as a trainer on the popular reality series WWE Tough Enough.

Booker's son Brandon was born when Booker was 17. His teenage girlfriend lost custody of their son and Brandon entered foster care while Booker was behind bars. Booker was able to gain custody when Brandon was 5.

Booker and Sharmell Huffman were married on February 5, 2005. Sharmell is a former Miss Black America who'd toured with James Brown. The two met when she was a WCW Nitro Girl.

Their marriage was reflected in their WWE personas: as he took to the ring as King Booker, she became Queen Sharmell.

Booker shares twins, a boy and a girl, with his wife Sharmell.